Kylotonn Games first stab at the official WRC title, WRC 5, is out now in France, Germany, Belgium and around the world on Steam (the reliable way to get games early if you live in a “have not” country).  The rest of the world will have to wait until October 16th for the box copies on the PlayStation 4, PlayStation 3, PS Vita, Xbox One and Xbox 360.

The title aims to faithfully recreate the 2015 WRC season, meaning all the cars – Volkswagen Polo R WRC, Hyundai i20 WRC, Citroën DS 3 WRC and Ford Fiesta RS WRC – and all the tracks – 13 Rally’s with 5 stages per, equaling 65 unique trails – are included.  Additionally, the title sports features such as dynamic weather conditions, dynamic lighting, realistic damage, and vehicle preparation (setting your car up for the stage).

While that is all fine and dandy, there is one glaring issue with WRC 5 at this current time.  Wheel support.  Below is the official wheel list. 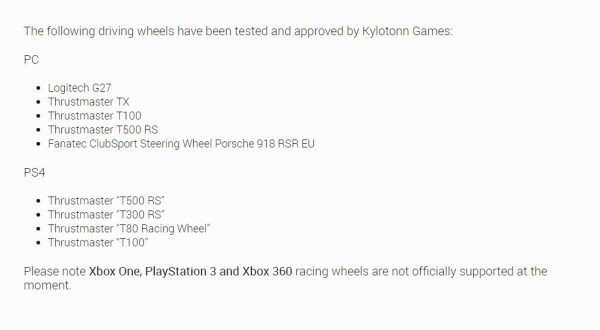 As you can see…it’s a bit lacking.  Now, usually “supported wheel” means that the developer tried it and dialed it in, and if a wheel was “not supported”, it still works but just doesn’t feel great.

Well, this isn’t the case with WRC 5 at the moment.  Darin fired it up on the Xbox One with the Thrustmaster TX and….nothing.  Nothing worked.

So, it appears like you cannot race the game on the Xbox at this time with a wheel.  And if you’re a PC or PS4 user, your options aren’t exactly great either.

If you received your version of the game today, let us know what wheel you have, what platform you’re on and if it’s working.  Curious to know if this is as big of an issue as it seems.