During our review of the Oculus Rift CV1 VR headset, I talked a lot about the discomforts of wearing the Oculus Rift with glasses.  I also talked about possible ways to alleviate this discomfort, including prescription lenses from a company called VR Lens Lab.  At the time I had not tried their product, or even knew for sure that I was getting a pair to review,  but they appeared to be the front-runner in making VR a little easier for those of us with bad vision and eyes that hate contacts.

But now I have received their prescription lenses, and racing with the Oculus Rift with my broke-ass eyes has never been better.

Like the Oculus Rift, VR Lens Lab was born out of a successful crowdfunding campaign via Kickstarter.  The campaign to create prescription lenses for both the Oculus Rift and HTC Vive was not only fully funded in 73 minutes on April 7th, 2016, but quickly realized, with production units shipping to customers in June.

If you’ve been part of any kind of manufacturing in your life, you know that this is incredibly fast.

But like most new products, everything wasn’t perfect.  Mixed in with positive reviews were negative ones talking about lens distortion and lenses moving out of place, specifically with the Oculus Rift Lens Adapters. 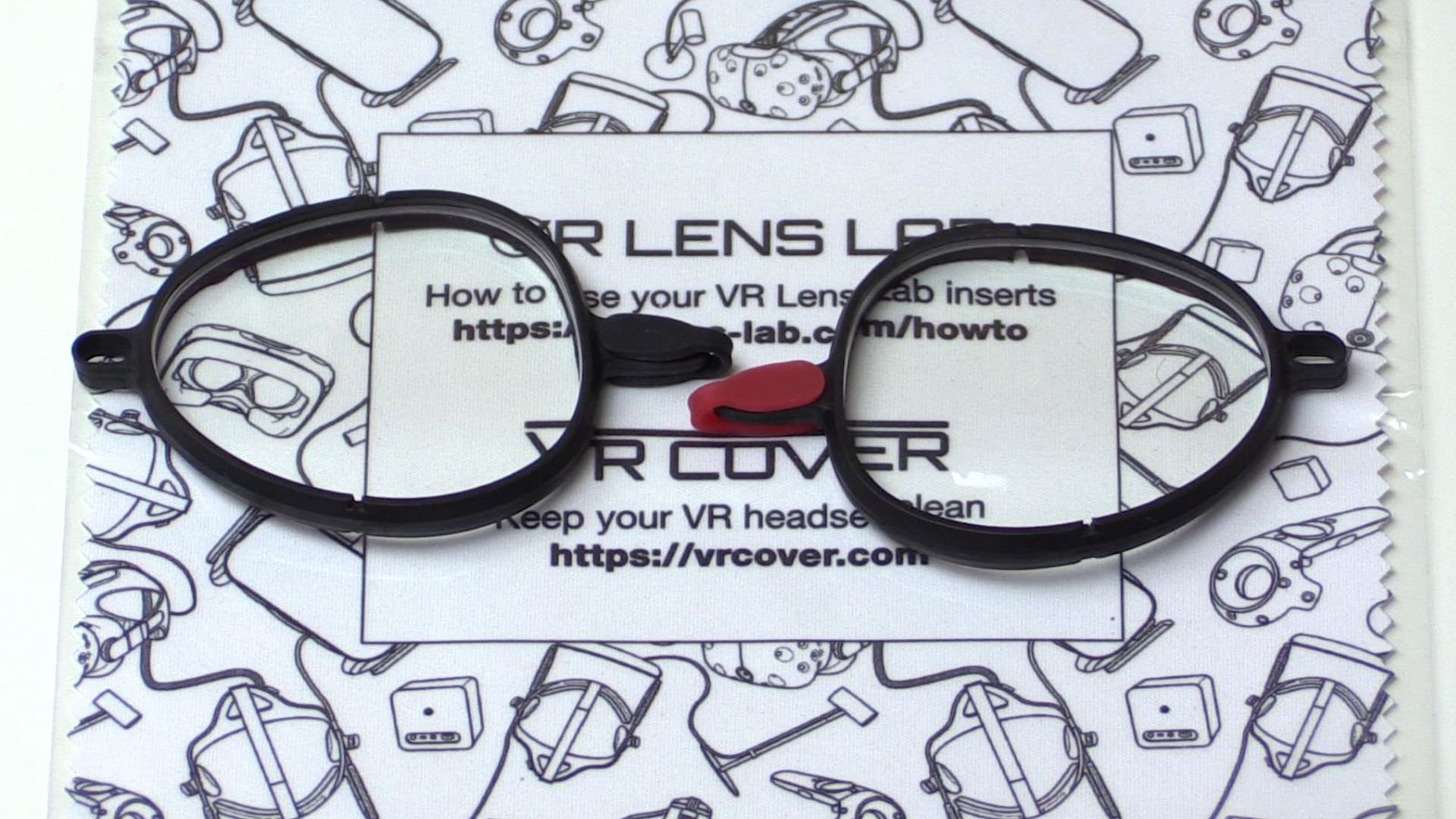 Which brings us to the lenses that we are reviewing today.  The Oculus Rift Lens Adapters that we received have two upgrades over the initial production run.  First, they sport red and black rubber spacers, a €19,00 ($20.40) recommended option, that are suppose to keep the lenses in place during use.  And second, our lenses have the new RABS lens technology, a €20,00 ($21.47) option, which makes the lenses thinner, lighter and minimize distortion.

These options can be selected on the Oculus Rift Lens Inserts order page at vr-lens-lab.com, where you also select your prescription.  Prescriptions run all the way from +6.00 to -8.00, and if your prescription falls outside that range, you can contact Lens Lab for a custom request.

My lenses with the adapters and RABS lenses came to reasonable €88,00.  I passed up the €29,00 Blueguard Coating which protects your eyes from harmful blue light radiation – but because it removes blue light – yellows everything a bit.  It was tough to pass up on because I am concerned about the amount of time I spend in front of screens, but because I wanted to keep the prescription lenses as close to the standard Oculus lenses as possible for the sake of this review, I passed.

For reference, my prescription is -4.25.

Installing the lenses is pretty straight forward.  The red spacer is for the left eye, black for the right.  The convexed side of the lens should be pointed towards your eye, or even easier, match the outline of the adapter to the outline of the Oculus lens.

The real trick then becomes securing it.  There are tabs on the top and bottom – the top tab now featuring the spacer – that wedge into the Oculus’s plastic/foam shroud that sits against your face.  You have to not only get the tabs into the groves, but then work them to keep the prescription lenses down against the Oculus’s lenses.

It takes a little bit of finesse, but once in-place, you’re ready to race. 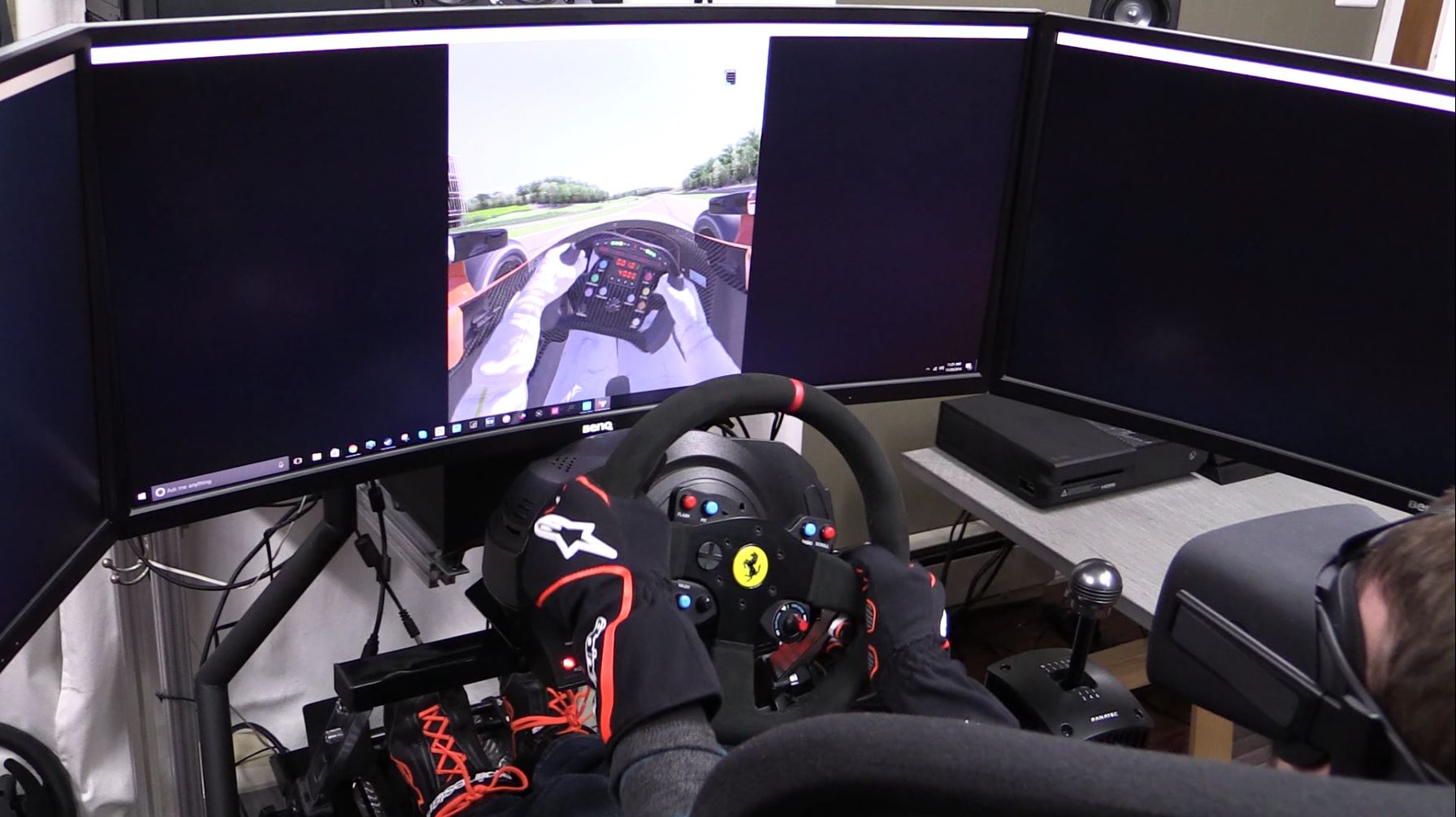 Not only was it WAY more comfortable to not have glasses shoved between the Rift and my face, the image was even a little clearer.  I didn’t notice any distortion issues – as long as the lenses were in place, more on that later – or any more or less “God rays” – when bright objects on screen bleed off light around the edges – compared to my glasses.  It did appear like field of view was slightly decreased by the lenses but you really had to be looking for it to notice it, so it was not bother to me.

Another pro is I didn’t experience the fogging up issues that I have with my glasses.  Now it has cooled off quite a bit here compared to when we reviewed the Oculus Rift CV1, so that makes it difficult for a one-to-one comparison.  But with that said, my face can now breath without glasses against my face so even if it was warmer, I’d imagine it would take longer to fog.  And as we mentioned in our Oculus Rift CV1 review, having a fan pointed towards your face helps to reduce fogging, with or without glasses or prescription lenses.

Overall, this is the best VR experience I’ve had, looking better and feeling better than when I wore glasses or even contacts. 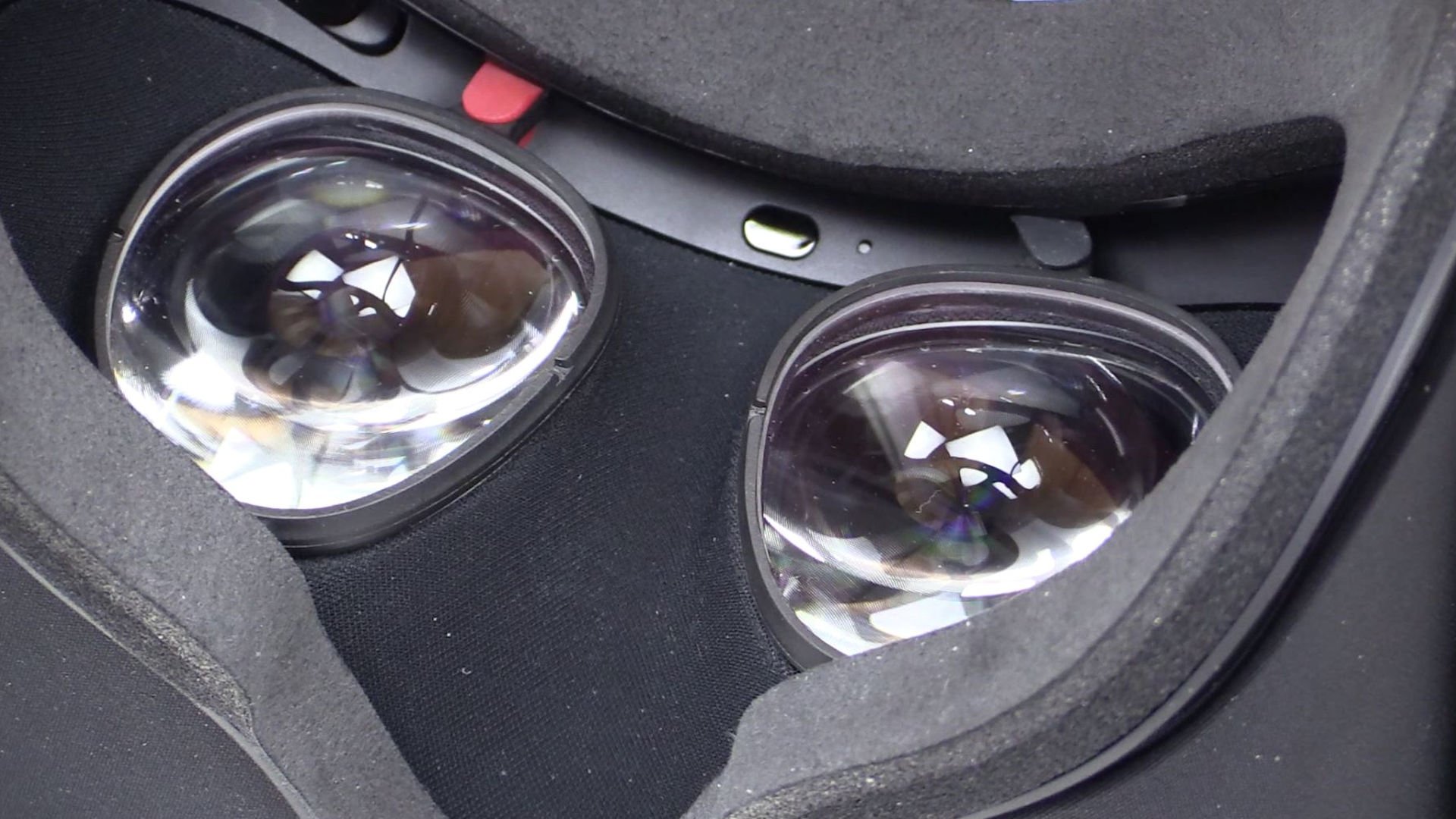 Let’s now talk about the only con I found with the VR Lens Labs prescription Oculus Rift Adapters, keeping them in place.  I couldn’t imagine how much the lens adapters moved around prior to the spacers.  Even with the spacers installed, I found myself checking – and adjusting – the adapters every time I was about to put the Oculus on.

The adapters don’t move a lot.  It’s not like they’re falling over.  But, they do tend to migrate slightly side-to-side once in awhile and nearly always “pop-up” from the Oculus lenses.  The good news is that this movement isn’t very noticeable while in VR.  I only noticed it when the text I was reading was a little out of focus.

Before we get to final thoughts, there’s one last topic I want to discuss and that is having to swap between the headset and glasses when navigating between setting up your race and actually driving.  This was an inconvenience, but it was still much better than dealing with glasses, so I sucked it up.

At least, that was until I discovered a Steam app called Bigscreen.  Bigscreen’s primary mission statement is to connect people and allow them to hang out in a virtual space and watch a movie, or virtually spoon, or something…  But my use for it was much simpler, it allowed me to view my desktop in VR, meaning I didn’t have to take my headset off constantly.

It was awesome being able to not only jump out of a session, create a new session, and jump in that one without removing my headset, but jump from one title to another and keep the headset on.

In my opinion, Bigscreen is a must have not only if you purchase the VR Lens Lab adapters but for VR use in general.  It is sooooo much nicer just leaving it on your face.

One recommendation though, after you download it, restart your computer or it stops working after you leave the first game you played.  There was also a few times when this happened later on in use, so it’s not perfect, and to be fair, is still in beta, but for the most part it works.

Now go download it if you have an Oculus Rift or an HTC Vive. 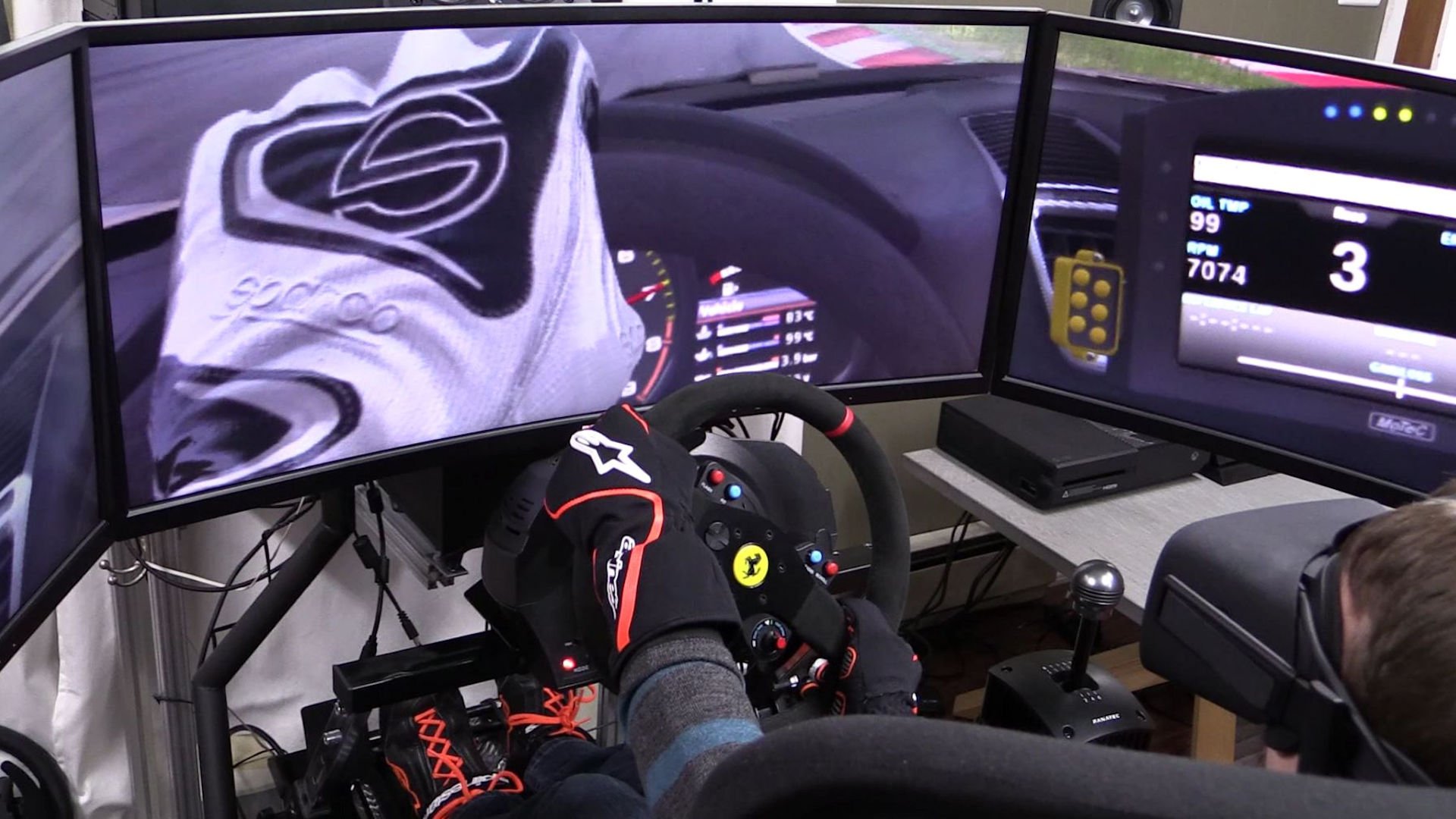 My experience with the VR Lens Lab Oculus Rift Lens Adapters was kind of surreal. It was the first time I could see without contacts in my eyes or glasses on my face in 15 years.  It literally felt like my eyes were brand new.

I’d imagine this is the feeling people have after getting Lasik.

Yes, I know it’s not because my eyes are magically fixed.  But it feels like it, and that is in itself, kind of magical.

The VR Lens Lab Prescription Adapters aren’t perfect.  I still think there has to be a better way to secure them than wedging them in there.  In fact, friend of the show, VR Guru and VR Lens Lab backer, Richard MacNaughtan (Avenga76 in the ISRTV forums), 3D printed a custom holder that he designed to better keep them in place.

I would like to see VR Lens Lab develop an option like this so everyone can have a better experience.  And by the way, if you’re watching VR Lens Lab, I have Richard’s info, hit me up.

But besides the fit, which is far from a deal-breaker, I have nothing but praise for the VR Lens Lab adapters.  They really improved the VR experience for me.  Now, that doesn’t necessarily change my opinion of the Oculus Rift CV1 from our review, but I do find myself thinking it over a little harder when it’s time to decide if I’m going to race on my triples or the Oculus.

If you wear glasses and race in VR, do yourself a favor, and get a pair of these VR Lens Lab Prescription Lenses.  Get the spacers, get the RABS lenses, download Bigscreen – whether you wear glasses or not – and pretend to be someone with 20/20 vision again.

Freakin’ virtual reality, tricking us in more ways than we ever imagine.