Review: 6 Speed SHH 3D Printed USB Combo Shifter. What makes the SHH 3D printed shifter stand out right now, is the fact that SHH are embracing newer technologies and techniques in the production of their latest offering for the sim racing community. Granted, 3D printing is not exactly new, it is however something that is now really only beginning to be utilised in producing sim racing hardware for every day use.

Aritz is a Spanish sim racing enthusiast and the founder of SHH, he has a back ground in sim racing which is fairly similar to many of our own. Having started way back when in 1986, with a Spectrum 48K, anyone remember those? Progressing to Micropose’s GP with keyboard controls and on to Need for Speed in the 90’s, Aritz then got serious and tried TOCA 2, Live for Speed and Richard Burns Rally which prompted him to purchase his first sim racing wheel, a Logitech Momo Driving Force. Nowadays he is into Assetto Corsa, Project Cars and occasionally races his own real world kart. 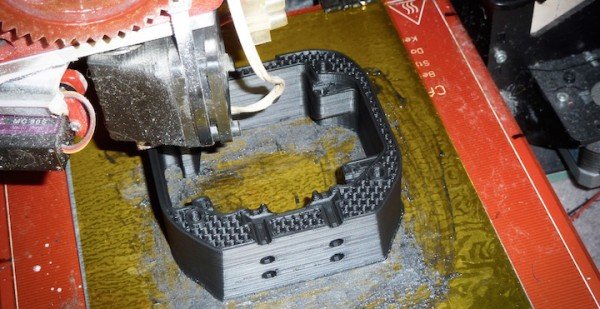 SHH and the idea of producing his own shifter came about when Aritz first learnt of 3D printers becoming more mainstream and he decided to construct his own 3D printer from a tutorial he had discovered online. He invested countless hours in honing his design and solving the myriad of technical challenges inherent in producing the shifter. Through much trial and error in both the design and production processes, and after arriving at version 10.0, the SHH 3D printed shifter was born! 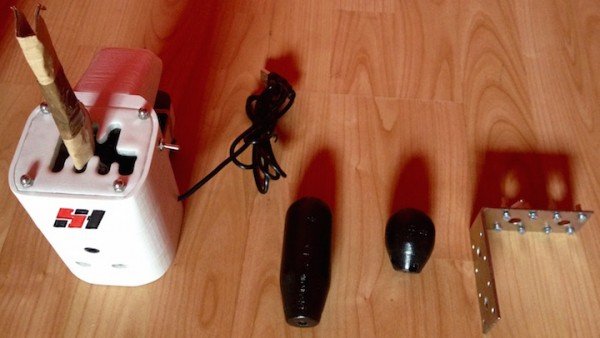 I was fortunate enough to be able to organise a shifter to review for RaceDepartment. So let’s start with what’s in the box! Present in the box I received, were the 3D printed shifter main unit itself, two 3D printed gear knobs, one for sequential shifting and a rounded traditional knob for ‘’H’’ pattern shifting. Also in the box was an ‘’L’’ shaped mounting bracket. Not all of these accessories are standard, there are several mounting options from which to choose whilst ordering your shifter depending on your rig, set up or desk. 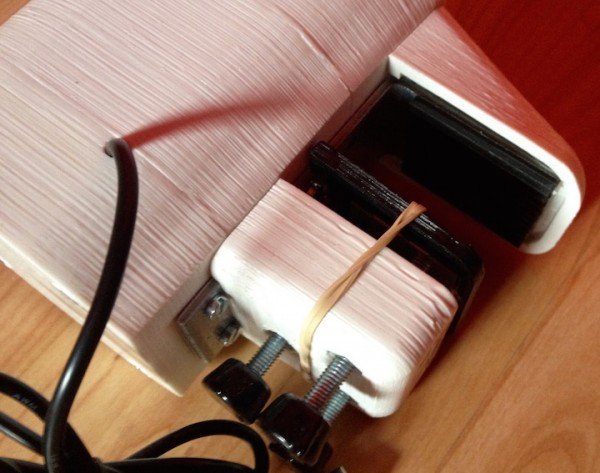 Depending on your preference, there are four colour options available for the shifter body and table mount, Black, White, Grey and Red. The gated cover plate can be ordered in Black, White and Grey. The two shifter knobs are a standard Black colour. For an extra fee, Aritz affords you the option of having your own custom logo printed on the shifter body itself to further personalise your shifter! Quite a unique option I would have to say.

As far as the quality of finish you get, it is a classic layered 3D printed finish. If you are expecting a super smooth mass produced look this is not the finish you are after. It is quite utilitarian and basic looking in appearance and texture. This does not detract from its own charm or sense of purpose. 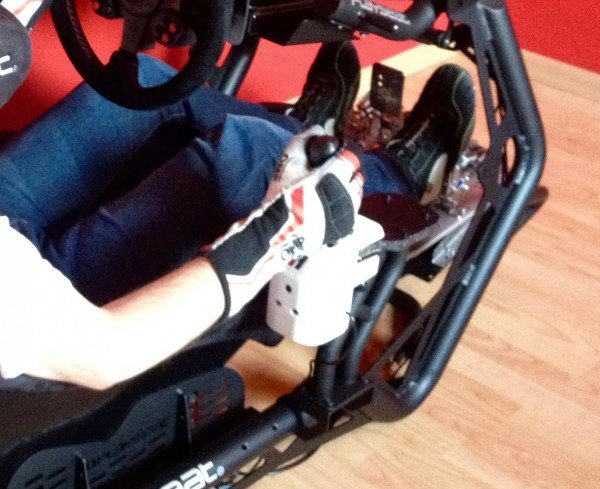 There are several options for mounting the shifter, in my case I was able to utilise the table mount to attach it to the G27 mounting bracket on the GameSeat. With the aid of a small block of material to replicate the thickness of a table top, I inserted it in between the shifter’s adjustable plate and the metal GameSeat bracket. The three clamping screws can then be tightened sufficiently, providing a stable base from which to confidently shift gears. Other mounting options available to you include a basic ‘’L’’ shaped bracket, Zalem mount and Fanatec mounts with or with out mounting tubes, all of which are extra cost options.

Attaching the gear knob is achieved by sliding the knob over the metal shaft and aligning it with the predrilled hole in the shaft. Then the fastening screw is tightened using a 2mm allen key.

Using either gear knob is dependent upon personal preference, I found it easier to leave the sequential knob attached as I could easily shift gears in ‘’H’’ mode as well as ‘’Seq’’ mode using this style of knob. 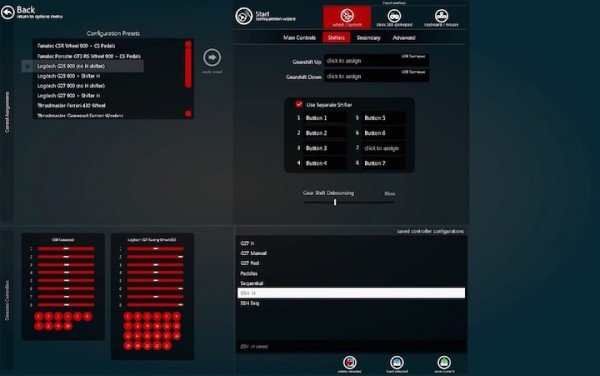 After mounting the shifter to the GameSeat I plugged it into an appropriate USB 2.0 slot on my PC. You guessed it, Windows recognised it and installed the necessary drivers for the newly discovered USB device! WHOOHOO

Most titles have basically the same steps when configuring a new peripheral. In the scenario you see here below, I am using Assetto Corsa as an example.

For the most trouble free installation in either Assetto Corsa, rFactor2, Project Cars etc, I would suggest using the install wizard and creating a totally new profile. In AC, don’t forget to check the ‘’Use Separate Shifter’’ box! I ended up making two profiles ‘’SHH H’’ for  traditional ‘’H’’ shifting and ‘’SHH Seq’’ for sequential shifting. 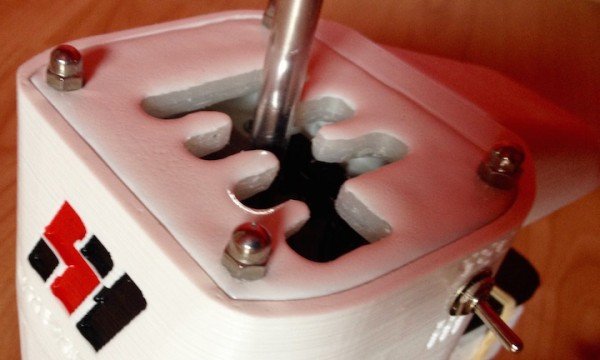 Changing from ‘’H’’ to ‘’Sequential’’ on the fly is a simple process. First, go into the game control settings and select the sequential profile you made earlier. On the shifter body itself, toggle the metal switch upwards to the ‘’Seq’’ position.

With the gearstick in the ‘’Neutral’’ position, you then depress the the gearstick and rotate it approx. 90 degrees clockwise to lock out the ‘’H’’ pattern and engage the spring loaded sequential movement. Using sequential mode requires that you shift from the neutral position to what is 3rd ‘’down shifting’’ and 4th gears ‘’up shifting’  To revert to the ‘’H’’ patterned shifter movement, the whole process is repeated. SHH has a concise PDF available to pictorially explain the above mentioned method.

Racing With The SHH Shifter

Getting down to business, once everything was set up correctly I could then get a feel for what the SHH shifter is like whilst racing. The gated top plate has well spaced gates and allows for positive and accurate shifting of the six forward and one reverse gears. The spring loading is weightier than a stock G27 shifter, there is definitely more resistance there! However, in the heat of an on-track battle it is possible to misshift even with well defined gates. Although, that may in part be down to my motor skills whilst trying to do my best.

The feeling of swapping cogs in ‘’H’’ mode is a good experience and feels more in keeping with the cars that are being raced in game. I have to confess, I used to loath the older cars in titles, but having a good ‘’H’’ Shifter and being able to heel & toe properly has given me a whole new level of enjoyment and appreciation for how hard it was to drive these cars quickly and cleanly. You feel more at one with the car, there is more of a definite connection to driving, dare I say it, ‘’old school’’!

Nowadays, I actually prefer to drive this way as opposed to two feet braking, flippers or                  sequential shifting. To each his or her own, of course. This brings me neatly on to the ‘’Seq’’ mode of this shifter. Having carried out the steps mentioned earlier to engage ‘’Seq’’ mode, it was now time to try a few cars with sequential gearboxes. The first thing that struck me was that the tension springs could be a little stiffer. There is a little less resistance than when in ‘’H’’ mode and it is quite easy to up and down shift. Having said that, as a G27 owner it is really cool to have the option of sequential shifting and seeing the in-game animations matching your inputs! Anyone that owns the standard G27 knows that it is not possible to have sequential shifting done by anything other than a modded shifter or after market shifter such as the SHH. On a whole, it’s a thumbs up for me and I enjoyed the added realism the shifter provided!

Having used the shifter in several titles for about a year now, I can say that there have been zero issues with it. Any questions I have had concerning the shifter have been answered promptly and politely by SHH.

Because it is a stand alone USB peripheral there is no reason it can’t be used in differing titles and with differing wheel manufacturers’ offerings. It is relatively easy to configure and should have you heel and toeing, sequential shifting or both in a matter of minutes!

Are there things that could be improved? Sure, the sequential return spring could be a little stiffer and the finish won’t please everyone, but for this kind of money there are no comparable shifters available which combine the convenience of being able to change modes and have you racing in your favourite car the way it was intended.

If you are on a budget, the SHH shifter most likely enables you to expand the options of a standard gaming wheel set up without having to raid the piggy bank.

This SHH shifter should be a solid addition to your sim racing arsenal and give you the sense of being more involved in what your chosen car is doing on track.