Welcome to our review of the new flagship, PC only, wheel from Thrustmaster, the TS-PC Racer.  Darin did our First – Not A Review – Look a few weeks back and – quite frankly – hit on most of the topics I’m going to talk about here, so consider this a second opinion with a sprinkling of new topics aimed to answer your questions from the First Look.

With that said, let’s talk numbers and acronyms.

The TS-PC features a new 40-watt brushless motor.  A new cooling system called Motor Cooling Embedded or MCE, that will prevent the motor from losing power due to high temperatures.  This new cooling allows the motor to have 50% more dynamic response and 4 times greater stall force – the force when you’re holding the wheel steady, like in a long corner – than any previous Thrustmaster wheel.  The wheel comes in at 16-bits of resolution thanks in-part to the new Field Oriented Control, or F.O.C.) that increased the precision of the wheel.  And yes, it has a – quote, unquote – turbo power supply that is said to provide continuous power, even at the peak power of 400 watts, thanks to its more efficient, finless, toroidal shape design. 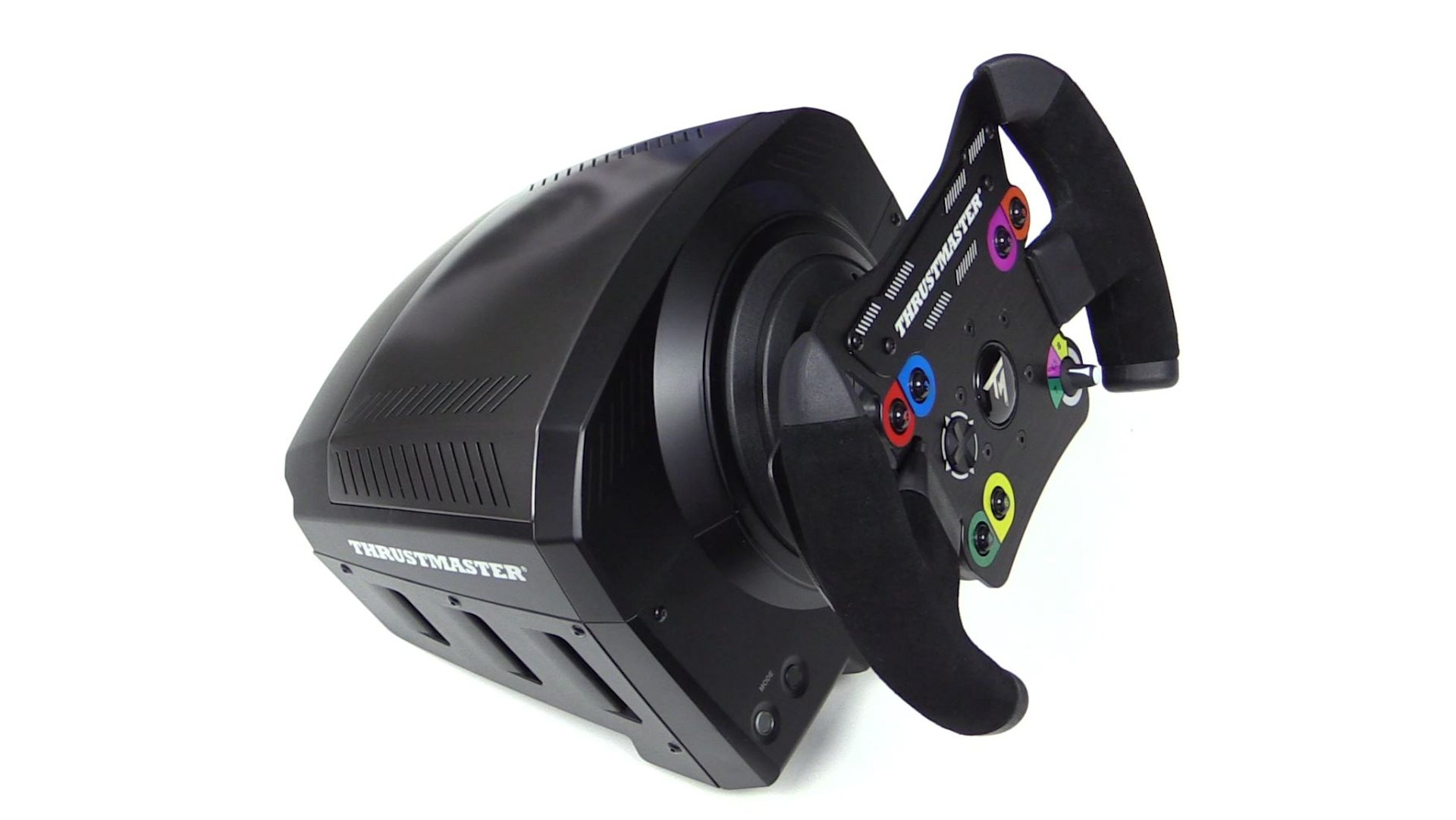 Now that we know what Thrustmaster PR thinks, let’s dive into our thoughts.

Aesthetically, there are more pros than cons here.  I’m kind of torn on the shape of the wheel base.  From some angles it looks good and from others it looks like a bloated brick.  But I do really like the design decisions made with the cooling slots and exposed bolt heads.  Kind of a throwback race car look when body panels were bolted on and had louvers.

Materials wise, the TS-PC base looks much more like a $500 or €550 wheel in person then in the pictures.  The base features quality plastics and a metal top, base and back.  Thanks to these materials, the base feels very solid…and heavy. 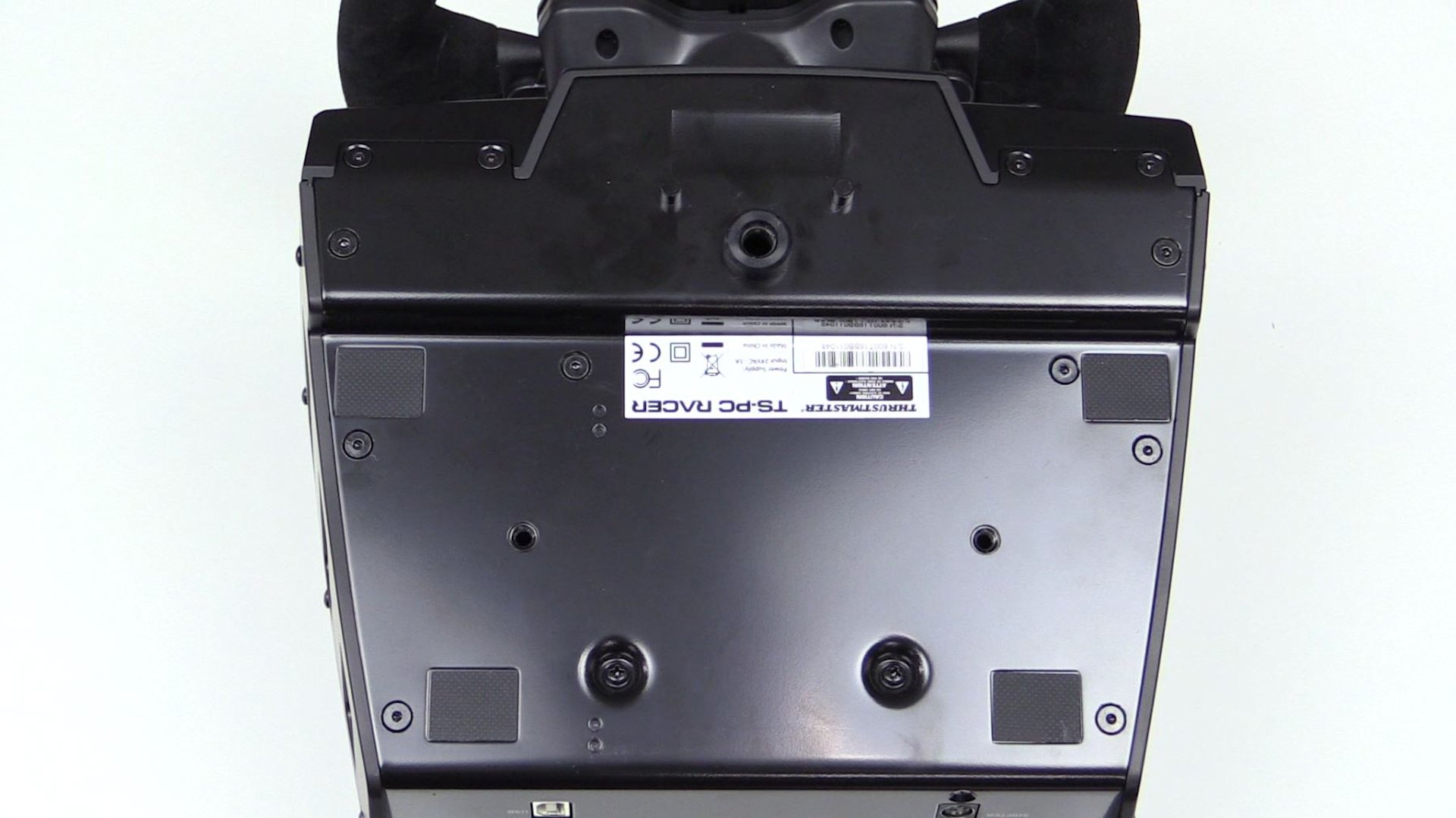 Speaking of the metal bits, the bottom features two holes for M6 bolts so the wheel can be “hard mounted” to your rig or desk – the ideal way to mount a wheel like this – and an integrated threaded post for the table clamp.  The table clamp is the same as previous Thrustmaster models and it gets the job done, but the interesting thing now is that the threaded post now has a rubber gasket around it, assumed to better hold the clamp in place, and two more posts that prevent the clamp from moving side-to-side.

The backside of the base features a fan and the I/O, with power, USB, pedal and shifter connections. 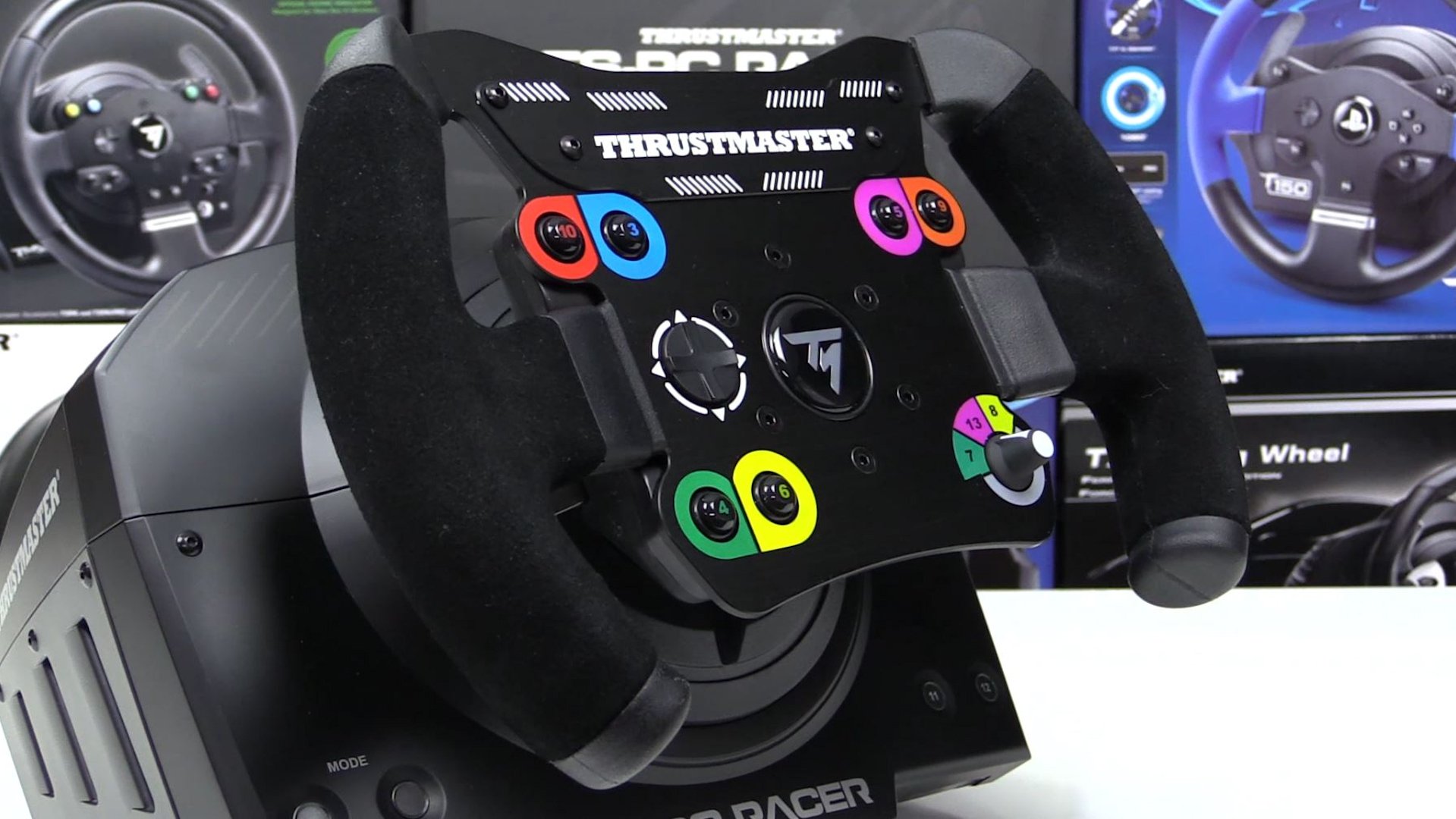 Like the base, the rim has more pros than cons.  I really like the shape and 28 cm diameter, which feels right for a formula style rim.  The metal faceplate gives the wheel a very solid feel, with zero flex, and the meaty hand grips really allow you to get your whole hand in on the action of turning the wheel, not just your fingers.

With that said, I think the Thrustmaster 599XX Alcantara rim has ruined me.  The hard rubber wrapped in suede grips on the TS-PC aren’t nearly as nice as the actual Ferrari sourced Alcantara and under-padding used on the 599 rim.  It’s not bad, but it would had been nice to see higher quality materials used on the flagship wheel.

On the backside of the rim are the two paddle shifters that feel very familiar to past Thrustmaster paddles, besides being smaller and feeling a little tighter in terms of their snap-back, which is nice.

Back to the front of the rim and let’s talk buttons.  The rim features six action buttons, a D-Pad and a three-way toggle with push function.  The new – glossy – buttons feel nice and have a similar clicking action as previous Thrustmaster buttons, which is just fine.  They are also labeled with their button number, which will be extremely helpful when mapping them, removing the guessing game of mapping buttons on the PC.

The button colors used on the rim have been controversial since the first images of the TS-PC Racer were released.  Reaction has been very love it or hate it.  In-person, I feel pretty indifferent.  Yes, they are pretty loud and remind me of Post-It-Notes.  And yes, more subdue colors would have probably looked better.  But, the use of very different colors have helped me when it comes to mapping buttons, so in-terms of function, it’s mission accomplished. 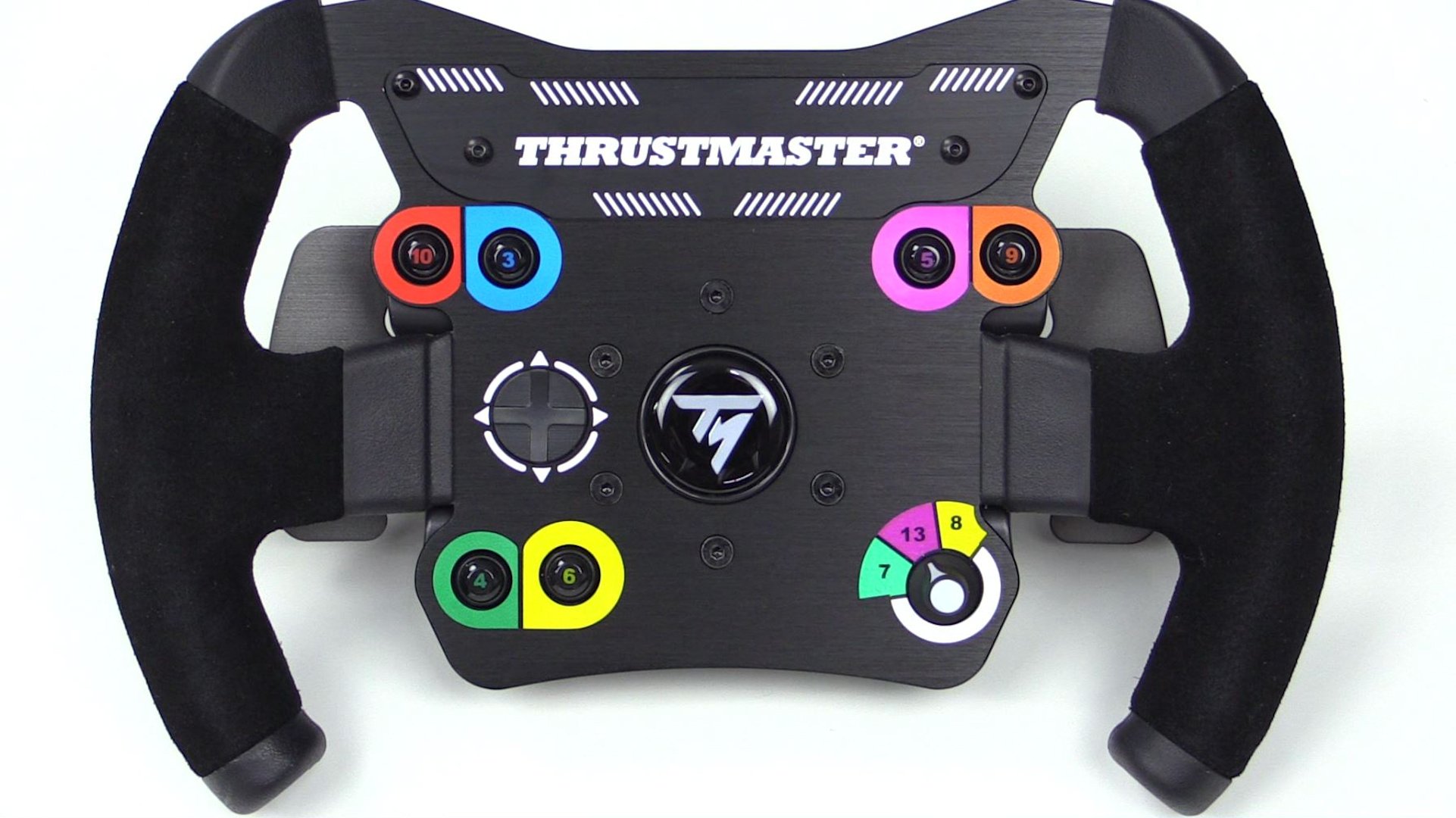 The biggest oddity of the TS-PC rim has to be the bolted on faceplate.  Not sure if it’s as simple as Thrustmaster wanting to carry the bases’ ‘bolt head’ design to the rim, but with a cutout in the wheel plate and plenty of space, it makes you wonder if Thrustmaster is planning some sort of add-on rev light attachment or screen?

At the very least, the design creates a golden opportunity for the aftermarket to attach their own rev light bar or cell phone cradle.  Never have I wished I owned a 3D printer more, because if I had one I would have a cell phone adapter already designed.

Naturally, like all other wheel bases in the Thrustmaster EcoSystem, other Thrustmaster rims can be attached via the “semi-quick” release system that now features a very large screw to ensure that the rim doesn’t move.  Whatever rim you do have on, it can rotate between 270-1080 degrees, and the degrees can be adjusted on-the-fly via scrolling left and right on the D-Pad while pressing the Mode button. 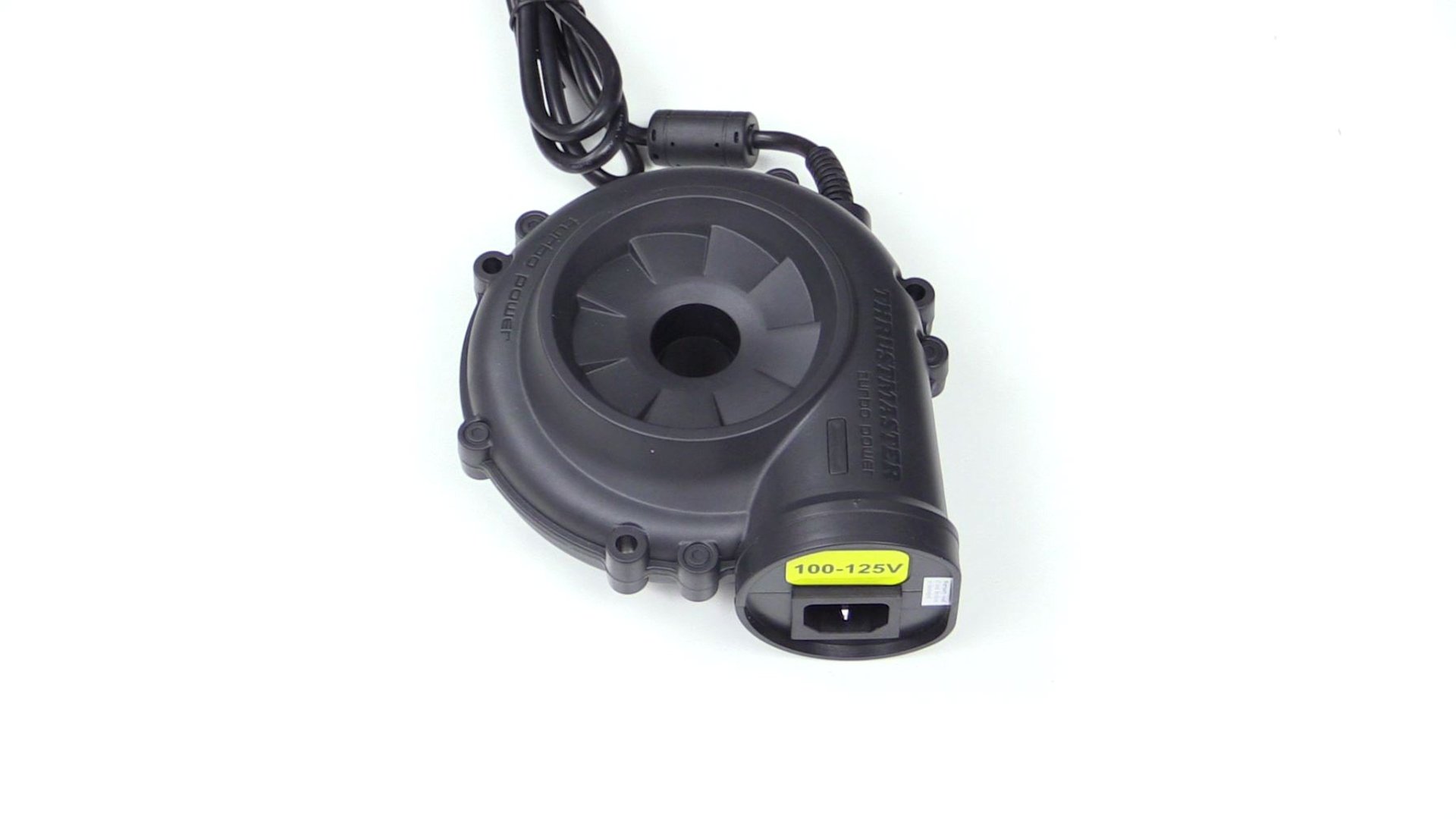 Before we move to performance, I want to touch on one more design aesthetic, and that’s the turbo power supply.

Like the button colors, the turbo power supply has received a very love it or hate it response from the community.  As for myself – yes it’s kind of campy – but I do like it.  I think it’s kind of fun and it isn’t nearly as big – or plasticky looking – in-person.  I also like that it has holes in it, holes that can be used to mount it to a rig, something I’m looking into myself. 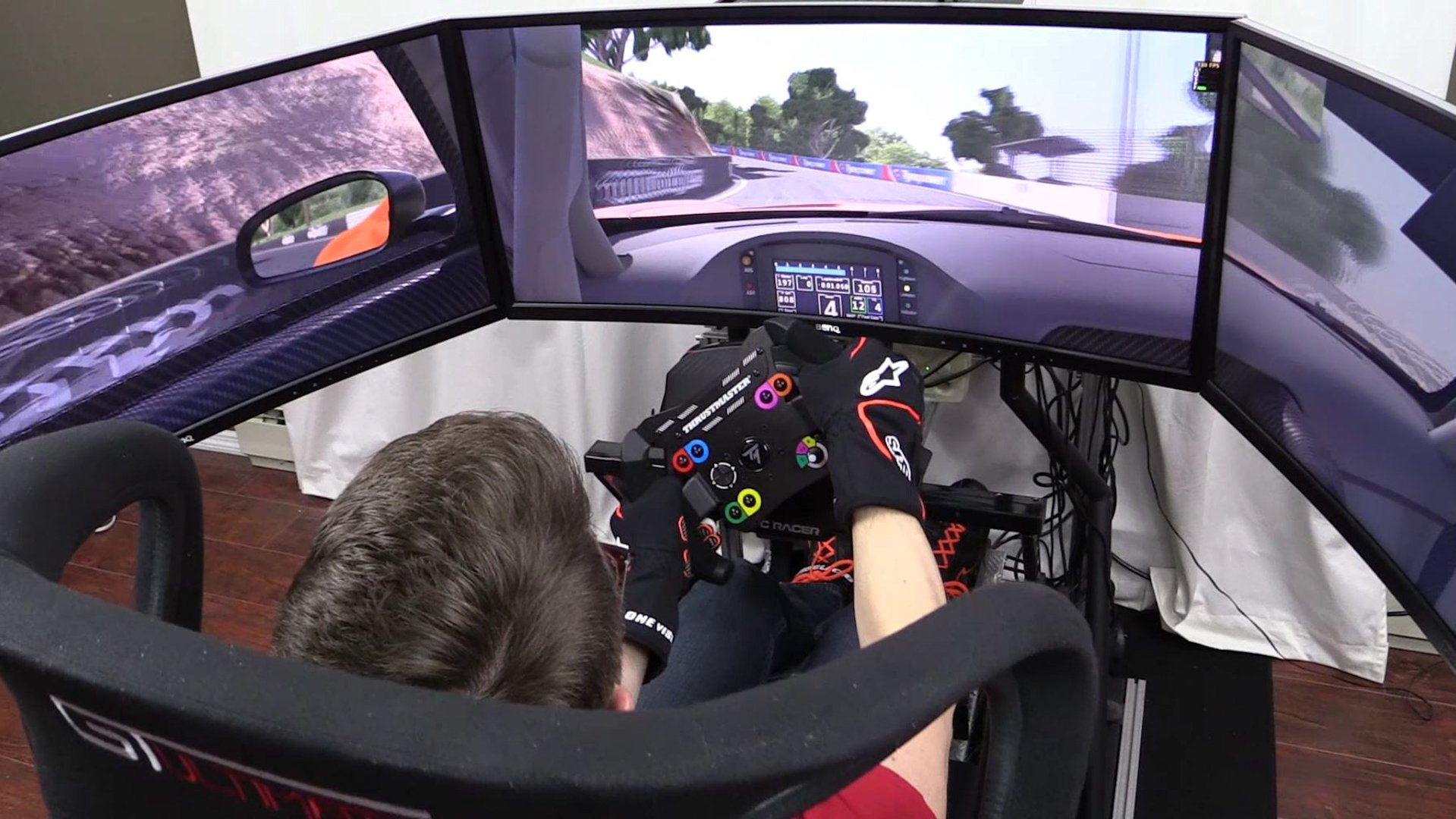 Now let’s get to the driving and although the turbo bit at the top was tongue and cheek, it kind of works perfectly to sum up the TS-PC Racer.  The wheel really does feel like a turbocharged version of the T300 or TX.

The force feedback is a fair amount stronger.  If I had to put a number on it, I would say that the TS-PC is about 50% stronger than the T300/TX, which is a nice step up.

There’s a weight in the wheel that isn’t present in the T300/TX as you turn the wheel into, through and out of the corner.  That weight – or more accurately, feedback – also becomes very noticeable when the back end jumps out and you need to catch the car.  Having some weight that you have to steer through actually makes catching the car a little easier and even more enjoyable.

In terms of force feedback strengths, I first adjusted in-game settings to get as much force feedback from the game without clipping as I could, then I went to the Thrustmaster control panel and adjusted Overall Strength from 75% to 100%.  On past Thrustmaster wheels I have left this at 75% because it felt best but with the TS-PC, I didn’t notice any negative effects of turning the strength up to 100%, so I would suggest tuning your wheel – if you pick one up – somewhere between those two numbers.

The TS-PC is also smoother than the T300/TX.  The difference isn’t as great as the force feedback, but I would put it at about 25% smoother, which is still a good amount. 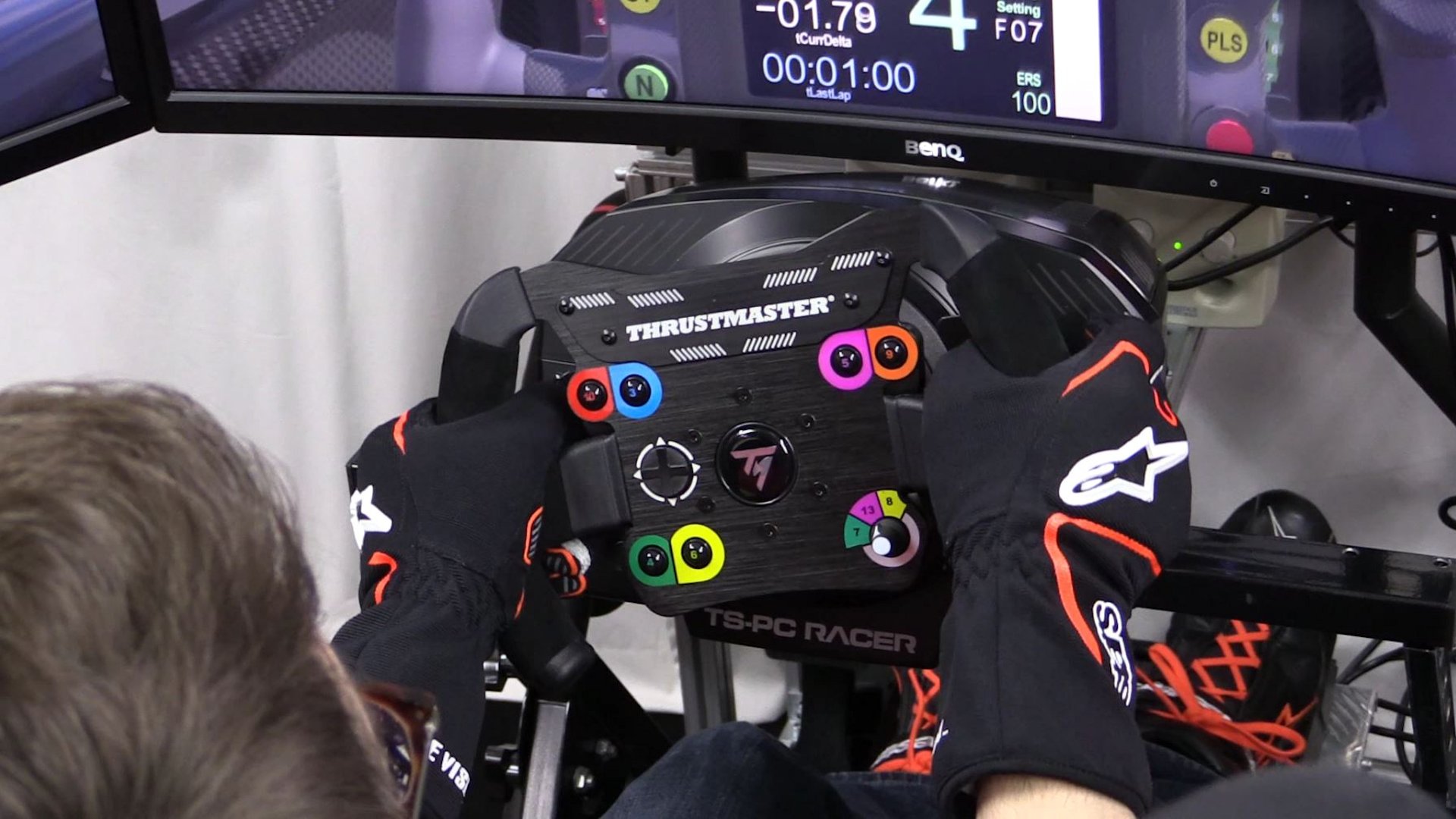 The TS-PC has stronger force feedback than the T500 but it’s not way stronger.  On the other hand, the TS-PC is way smoother than the T500.

Also, even when I turned the force feedback way up, like a lot of clipping up, I couldn’t sense any slipping from the assumed belt drive.  We say assumed belt drive because Thrustmaster hasn’t said anything either way but it feels belt driven.

In fact, that was one of the biggest take-away’s from driving the TS-PC.  If you remove all the branding or put an Oculus Rift on my head and sat me down to drive it, I would figure out that it’s a Thrustmaster wheel.

This could be taken two ways.  For me I think it’s a good thing because I like the feel of the T300/TX and this is an improvement on that feel.  But if you aren’t a huge fan of those wheels and were hoping for something more revolutionary than evolutionary, then this probably isn’t what you want to hear.

And speaking of hearing, once in awhile, the wheel’s fan would become noticeable.  It was never noticeable while playing, only after you left the game and the room was silent.  It wasn’t that it was loud, it was more the note that the fan would sit at until it turned off was noticeable.  The good thing is this only lasted for about 5 minutes until the fan shut off. 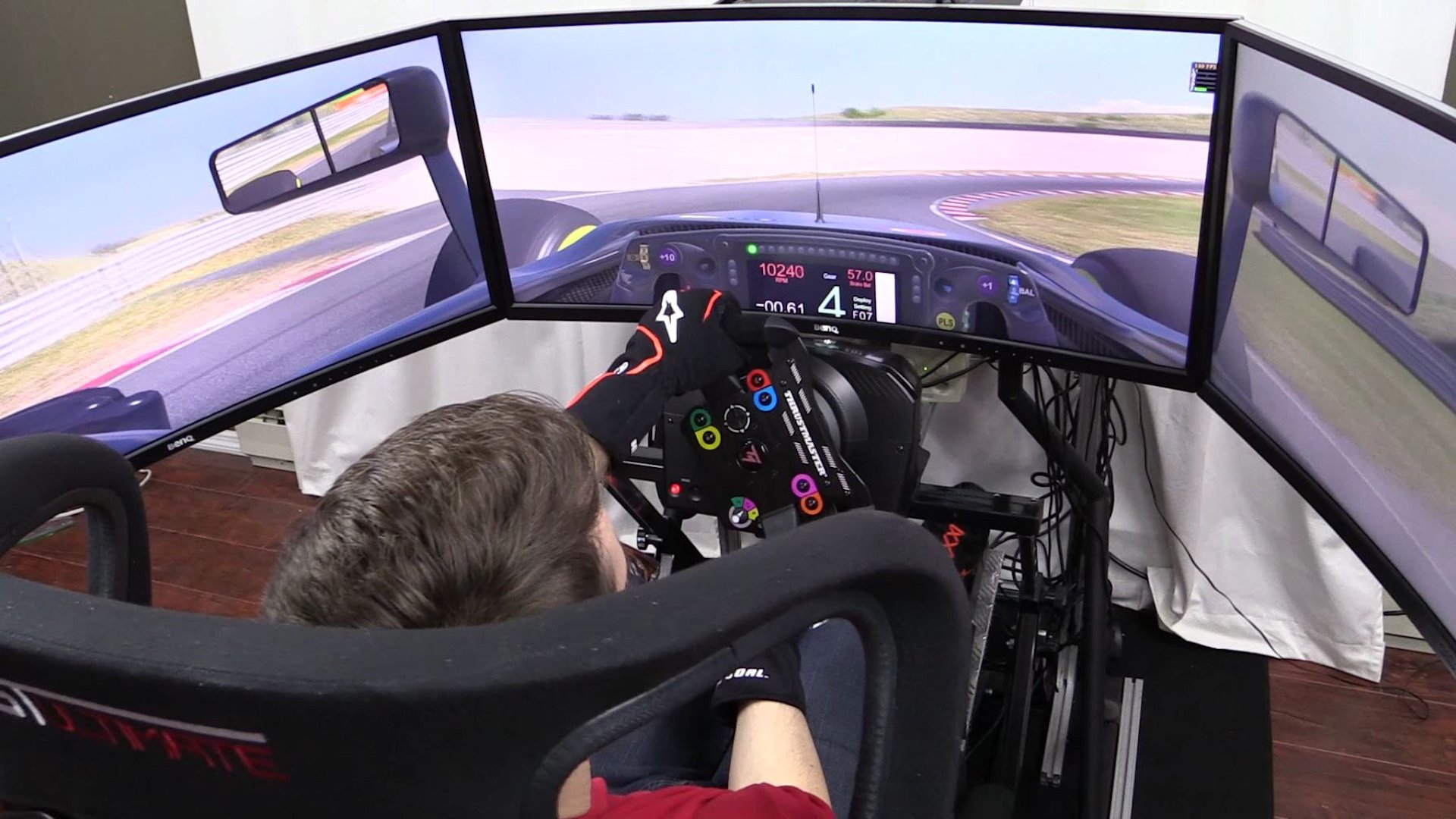 Let’s put a pin on this review of the Thrustmaster TS-PC Racer with some final thoughts.

Recently we released our 2017 PlayStation 4 Racing Wheel Buyers Guide where we introduced the concept of categorizing wheels as either Entry, Consumer, Enthusiast or Hardcore level wheels.  In that video we defined the Enthusiast level category as wheels that clearly have a performance jump over the Consumer level wheels, but at a price that doesn’t give you the same bang-for-your-buck as the Consumer wheels do.

The TS-PC Racer falls nicely into this category.  It’s performance creates separation between it and the the T300/TX, but it comes at a price.  The question is, is it price too high for the performance?

I don’t think so.

While for $500 or €550 I would had liked to seen better materials used on the rim grips, besides that, I think everything else justifies the price.  Between the stronger, smoother, solidly built, base and the right shape, size, rigid, rim, the price justifies the performance.

Yes, you still need to pick up pedals to go race, but for another $100-$200 you can pick from a few good options, them being the Thrustmaster T3PA, T3PA Pros or Fanatec CSL Elite LC pedals that I’m currently using.

If you go with the CSL Elite pedals then that puts you at $700 which is $300 more than the new T300 GT Edition and $230 more than the T300 Alcantara Edition – if it’s at regular price – which seems pretty reasonable for the performance jump.

Does the Thrustmaster TS-PC Racer blow my socks off?  No.  But to be fair, it takes a lot to get me to drool over a sim racing product these days as I’ve grown cold, senile and jaded….

But the thing is, the more I drove the TS-PC Racer, the more I liked it.  Every time I jumped in a car to just get a lap of footage to use in the review, I found myself turning another lap, and another lap and another.

And that my friends, is a sign of a good product.