Remember E3 last year? Yes, it has been a while, but if you do, you might also remember that Thrustmaster showed off a LED display for PlayStation 4 systems. Back then, the release was anticipated for Q4 2017 which obviously did not quite happen, but now it is here in all its glory!

What’s It All About?

Essentially, the display is supposed to give all PlayStation 4 racers, mind you this does include pad users as well, all the important information at a glance, e.g. lap, current gear, revs.

As it connects to the PlayStation 4 via Bluetooth, it is the first of its kind which raises the question if game developers are really interested in supporting it. Thankfully, they are! As of now, DiRT 4, F1 2017, WRC 7, Gravel and Project CARS 2 are officially supporting the BT LED Display.

The Bluetooth connectivity makes it, together with a lithium-ion battery, completely wireless too! According to Thrustmaster, a single charge will last between 24 and 48 hours. Recharching is then handled by a micro-USB cable, the same kind you would also use for your PS4 controllers.

Sadly, the display is a PS4 exclusive right now. Whether other platforms will receive similar products is still unclear.

The Thrustmaster BT LED Display is available now and will set you back €169.99 (taxes included) or similar in your local currency. 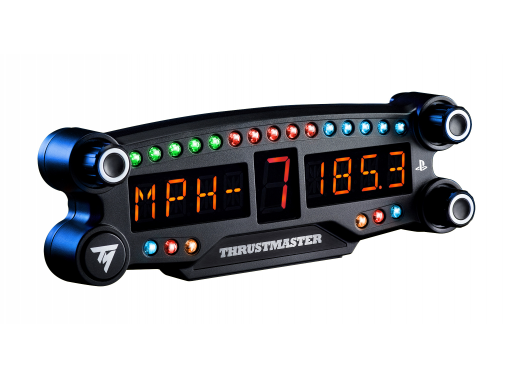