Presenting our review of the Thrustmaster 599XX EVO 30 Wheel Add-on Alcantara Edition. The wheel goes on sale on September 30th October 22nd for $179.99 and will also be available in the T300 Ferrari Alcantara Edition wheel and pedals set for $469.99 on December 5th.

The wheel is the 8:10th version of the real Ferrari 599XX EVO race car which puts the wheel at 30 cm in diameter. It also means that it gets the same D-shaped design, similar button box and Alcantara wrapped rim as the real 599XX. And this is not just any Alcantara, it is the same Italian made, hand-stitched, Alcantara that the real car uses and it feels like it.

The wheel weighs 2.6 lbs/1.2 kg, which is the same weight as the stock T300 RS rim even though it’s 2 cm larger in diameter. This is partly due to the steel center rim wrapped in a healthy amount of light weight polyurethane padding and of course the Alcantara.

The button box is the same as the Thrustmaster GTE rim, featuring six action buttons, a three-way toggle and a D-pad. This also means it features the same metal paddle shifters that feel nice but do not move outwards to suit the larger diameter rim. 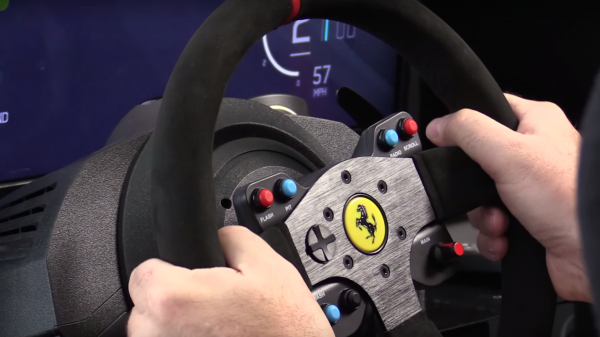 Now that we’ve reviewed the features and specs, let’s get to our pros and cons. First up the pros.

The first pro is the larger diameter rim which feels much more realistic compared to the 28 cm rims.

What is probably the biggest pro is the hand stitched, Alcantara, rim that feels fantastic. Between the Alcantara and padding, this is the softest, nicest, Alcantara rim we’ve ever felt, including our Momo MOD. 27.

The abundance of buttons is also a pro, giving plenty of options while driving. The three-way toggle in particular is convenient for on-the-fly adjustments like brake bias.

The wheel’s relatively lightweight is a pro. While the wheel isn’t any lighter than the standard rim, it sure feels lighter and seems to transfer more force feedback while driving. This feeling may be due to the larger diameter.

The last pro is the wheel looks legit. Between the Alcantara, D-shape, and brushed black metal, the wheel looks very much like the real-life rim. The rim is certainly the most realistic looking rim that Thrustmaster has ever released. 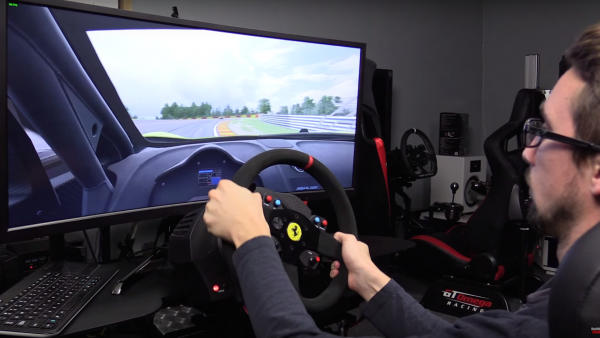 Now on to the cons.

The biggest con of the 599XX rim is the positioning of the paddle shifters, which do not move outwards to match the new rim diameter. This isn’t necessarily an issue for people with bigger hands (Darin) but for people with smaller hands (John) it takes some getting use to. With that said, you do adapt quickly to them and they become more-or-less a non-issue.

Another con – that we didn’t mention in the video review – is that the Alcantara will wear overtime. This can be mitigated with the use of gloves, but it will still wear and become less soft and shinier overtime. All Alcantara does this and anyone who purchases an Alcantara rim should know this going in, making this less a con and more a public service announcement.

The next con is again dependent on user perception. The rim is branded as a Ferrari rim with a Ferrari center logo cap. If you’re a Ferrari fan this is a pro. If not, then this is a con. Of course, the cap can easily be covered with a different decal if you please.

The last con of the 599XX rim is the price. Again this is a con with an asterisk. While $179.99 isn’t cheap, compared to other quality Alcantara rims, this is a bargain. Darin purchased our used Momo MOD. 27 rim for $240, and then spent another $160 for the adaptor so it could be used with the Thrustmaster wheel bases. With this rim feeling even better than the Momo – yes, we are as surprised to say that as you are – this makes the wheel look like much more of a bargain.

Overall, we really (really) like this rim. If you’re a Thrustmaster wheel base owner, this rim should really be on your must have list. Between the larger diameter, fantastic feeling rim and abundance of buttons, there isn’t any glaring negative with this rim.

Even more so, if you’re in the market for a new wheel and pedal set for the PC and/or PlayStation, the Ferrari T300 package at $469.99 is the best deal in sim racing, saving $210 over buying each component separately.

In conclusion, Thrustmaster has come out with an awesome rim that even make certain real racing wheels blush with envy (and at a much easier price to swallow). The Thrustmaster 599XX EVO 30 Wheel Add-on Alcantara Edition is certainly a worthy investment for those Thrustmaster users who want to enhance their sim racing experience.

Posted in:
Tagged with:
Back to Top