Race wheel to wheel for the FIA GT Championship in this week’s Throwback Thursday, where this time we are taking a look at SimBin’s GTR 2 – FIA GT Racing Game. Released in 2006, the title simulates the 2003 and 2004 FIA GT Championship Series and is widely regarded as one of the best sims for GT style racing.

GTR 2 was based on the isiMotor Engine as used in F1 Challenge 99-02, and was jam packed with features. One of the popular additions was the driving school, where you could learn to become an effective racer with comprehensive challenges. The title also featured a full 24 hour day/night cycle, as well as rain, all of which dynamically affects the handling characteristics of the cars. 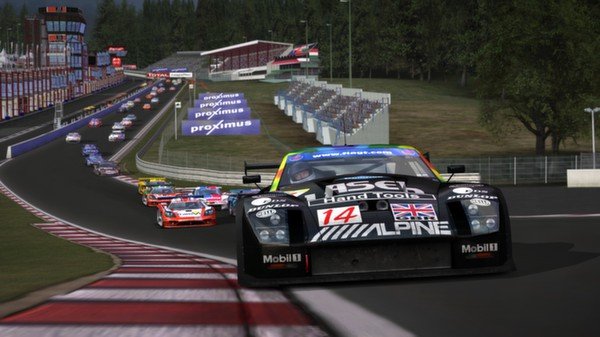 The sim includes over 27 different car models, including all of the classes involved in FIA GT racing, ranging from the 600 hp GT racers down to the 400 hp NGT class. It is worth noting, however, that the Steam version of the game removed the Ferrari and Porsche cars due to licensing conflicts. 15 real-world racing circuits with 34 variants are available out of the box. Some notable tracks include Monza, Imola, Spa, and Barcelona.

Like most other ISI-based simulators, the modding community has greatly expanded the life of GTR 2, adding hundreds of cars and tracks to the title. One of the most popular mods is Power and Glory, which brings the cars from GT Legends (and then some) to the title. Some other add-ons include Formula One seasons, V8 Supercars, and the Le Mans series.

GTR 2 is definitely one of the all-time sim racing greats, and is worth it for any racer to check out. GTR 2 is available for $7.99 on Steam.

What are your guys’ thoughts on GTR 2? Where would you rank it?