Presenting our reviewing the brand new Xbox One compatible entry level wheel from Thrustmaster, the TMX.

This isn’t our first rodeo with the TMX.  John got a chance to sample it with Forza Motorsport 6 at its launch event in New York City last month at the same time as Darin released his First Look at it on the Xbox One.  Now we’ll round out our coverage of the TMX with a review focusing on the PC.

By being Xbox One and PC compatible, the TMX is the ying to the PS4 and PC compatible T150 yang.  It features the same specs as the T150, including 12-bit resolution wheel, 10 bit pedal resolution, Mixed belt-pulley and gears system, 11”/28 cm diameter rubber-coated wheel that isn’t removable, 270-900 degrees of rotation that can by adjusted on the fly, 5”/13 cm tall metal shifter paddles, desk clamp as the wheel cannot be hard mounted but the pedals can be, and 12 action buttons + directional d-pad. 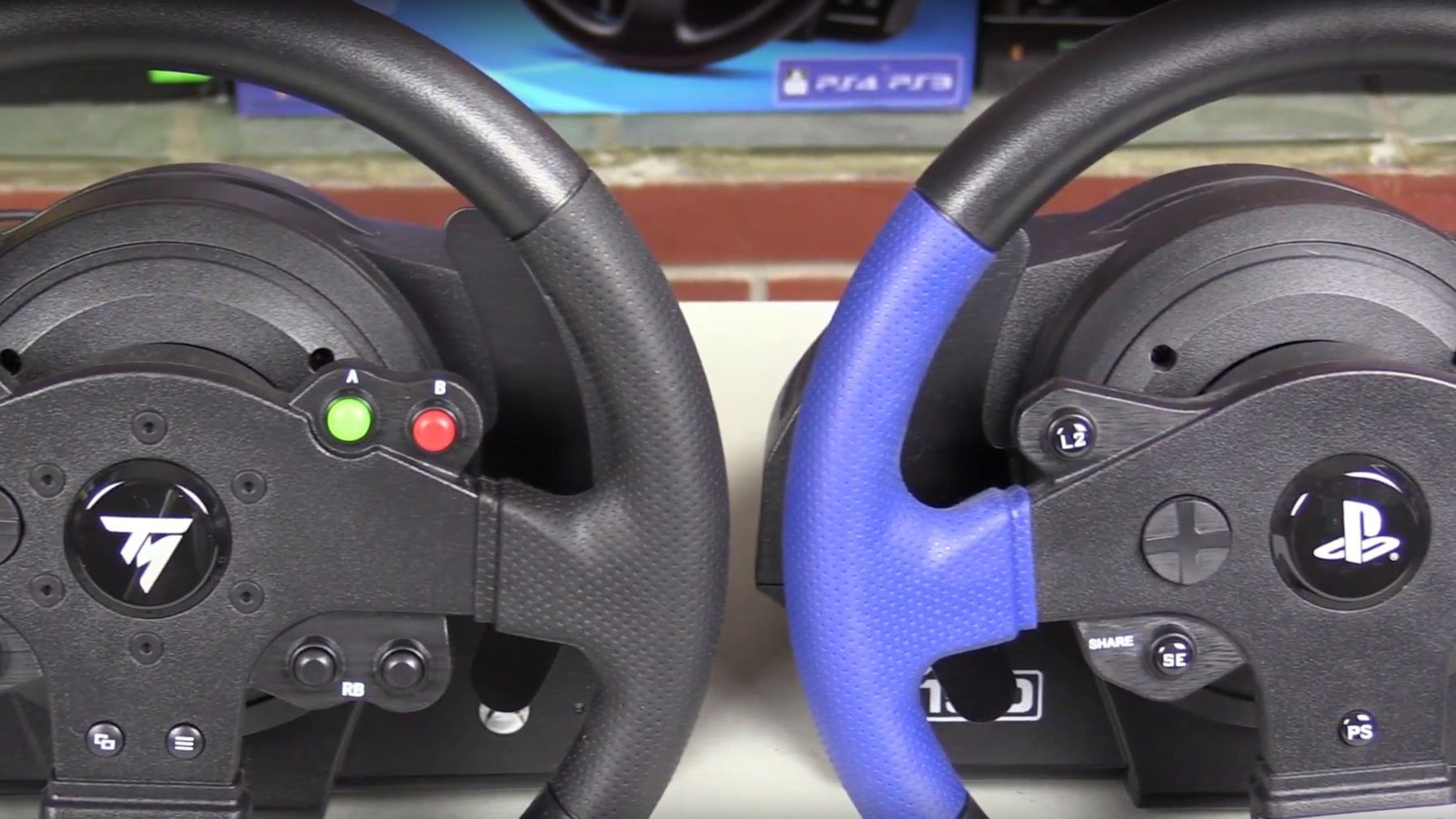 In fact, the buttons are one of the few things that differentiate the TMX from the T150.  Instead of clustering the buttons on the rim like the T150, the TMX places them on the perimeter.

The other difference is the TMX comes murdered out in all black, compared to the blue and black theme of the T150.

The TMX is plug and play on the Xbox One and only requires you to download a driver for the PC.  Once the driver is downloaded you can edit the settings in the Control Panel, although the default settings are a good place to start and where we ended up keeping the wheel at.

With a retail price of $199.99, the TMX wheel punches above its weight with relatively smooth force feedback and no center deadzone thanks to the mixed belt-pulley and gears system.  The mixed system creates a feel that’s halfway between its more expensive, belt driven sibling, Thrustmaster TX, and the helical gear driven Logitech G920.

Force feedback strength isn’t world bending, but is good for the price point and translates what the car is doing.

The metal paddle shifters are pulled straight from the more expensive TX and feel good to the touch and are very positive feeling when engaged. 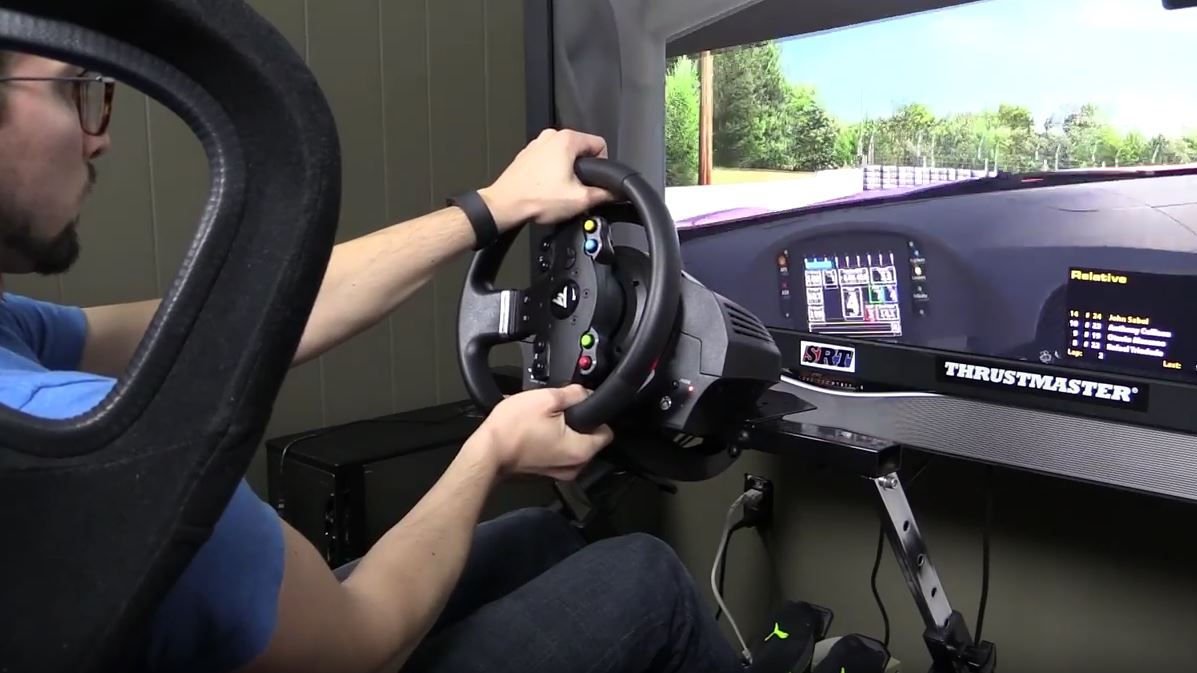 What isn’t quit as nice to the touch is the rim.  You certainly feel the entry level price when you hold the rubber wrapped plastic rim, but it does provide good grip and gets the job done.  In fact, the 11″ / 28 cm diameter size feels pretty generous for the price point and not so small in 2016 as real world race cars – especially GT cars – continue to run smaller and smaller rims.

Like the paddles, Thrustmaster stuck to the company parts bin and used the same buttons and d-pad from their TX/T300 rims, again, bringing a welcome higher price point touch to the entry level.

The wheel clamp and rubber pads did a nice job of keeping the wheel in place and we didn’t have any issues with it sliding around.

While the wheel punches above the $199.99 price point, the pedals do not.  Do they get the job done?  Sure.  They are certainly drivable – and as always with Thrustmaster – the more accurate 10-bit resolution is appreciated for relaying what your feet are doing to the game.

But is it engaging?  Not really.  While the brake is stiffer, both pedals are very easy to press.  This results in you relying on what is happening on screen to determine how far to press the brake heading into a corner, instead of the feedback you get from your foot.

But again, this is an entry level product, and with the ability to replace the stock pedals with the solid T3PA pedals, it’s clear Thrustmaster put its development budget into the wheel and not so much into the pedals.

The TMX is a really great entry level product for the Xbox One.  It makes a strong case for being a first wheel for someone who is ready to upgrade from the controller for a few reasons.

First, it will make you faster.  Going from controller to wheel isn’t a guarantee of being faster.  Trust me, back in the day I went from a controller to a wheel from a manufacturer whose name ends in a ‘z’ and the car was undrivable.  I couldn’t keep it in a straight line with – what felt like – 5 inches of center deadzone.

You don’t have to worry about that with the TMX.  Driving will become much easier.

Second, it doesn’t require a huge investment.  That not only includes the reasonable $199.99 price tag but the fact that you don’t have to have a rig with it. 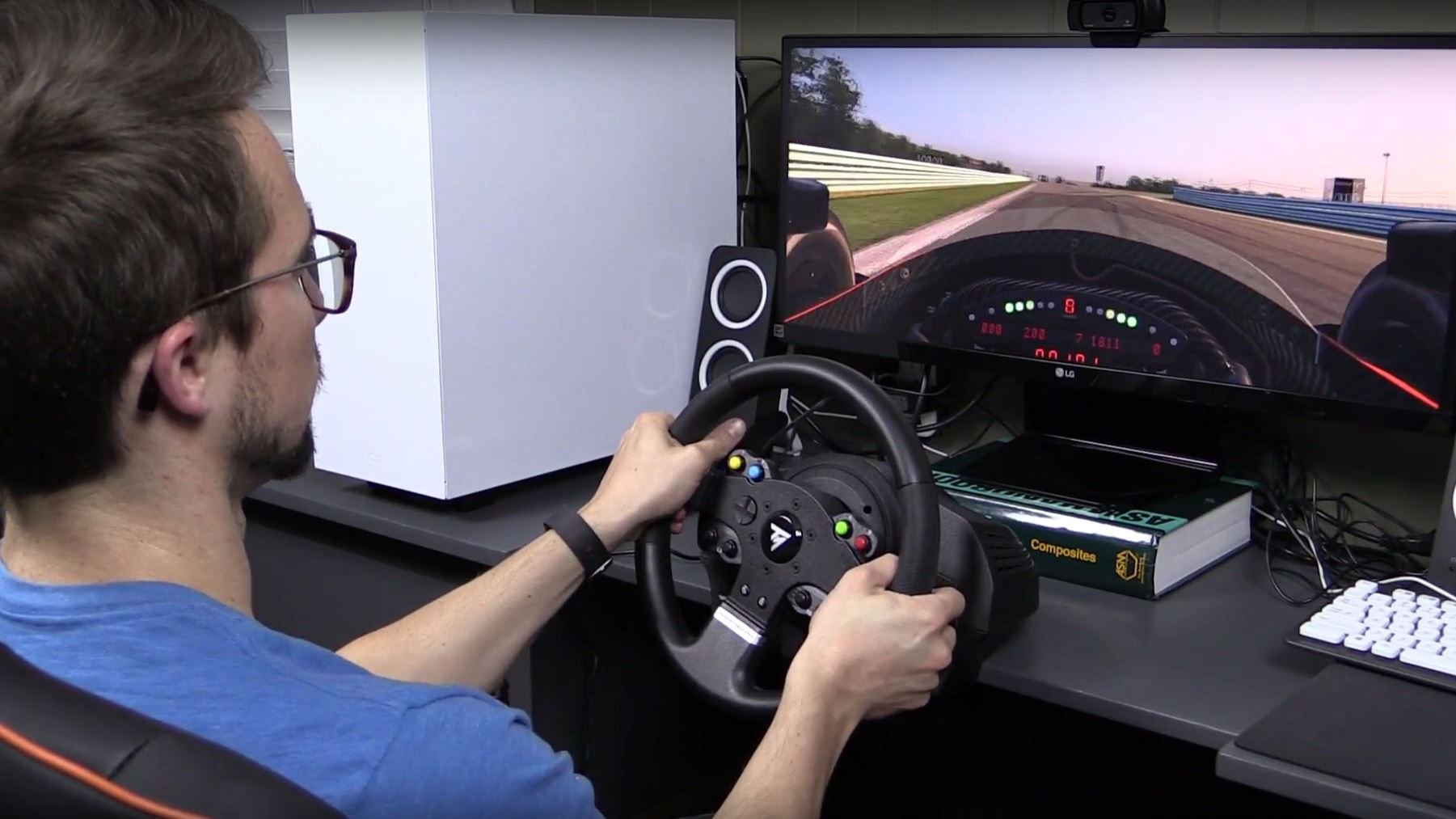 In fact, understanding that this is an entry product and probably the first “sim” purchase for many people, we put ourselves in their shoes and clamped it to the desk where the This Week Inside Sim Racing live show PC is, and pushed the pedals against the wall.

And guess what?  It worked great.  Only once did the pedals lift up on me and that was due to me spinning and having the pedals on a shelf instead of the floor.  Get them at a better angle and they aren’t going anywhere.

The wheel clamp performed even better on the desk where it had more surface area.  And while my relatively thin desk was no issue, I did test to see how thick of a desk you could clamp it to.  The clamp was able to handle this 1.75″ gap with no problems and could probably do 2″ or 50 mm.

We would also recommend the TMX over the T150 if you’re looking to get into PC racing for the same reasons I mentioned before and because it looks more expensive in all black versus blue and black of the T150.

Just like its PlayStation counterpart, the T150, we like the TMX a lot as a gateway drug into sim racing.  In fact, we like the feel of the hybrid belt-gear wheel system more so than the higher priced, gear driven, Logitech’s.

If you’re all in on sim racing and are getting a rig or have a rig, you probably want to look upstream at the Thrustmaster TX or T300.  But if money’s tight, or space is at a premium, or you just aren’t sure how invested you want to be into sim racing yet, then the TMX is really solid option for getting started on the Xbox One and PC.