Welcome to my Thrustmaster T300 RS PC Review. I already did  a review that focused on the PS3 and this one will be solely for the PC. 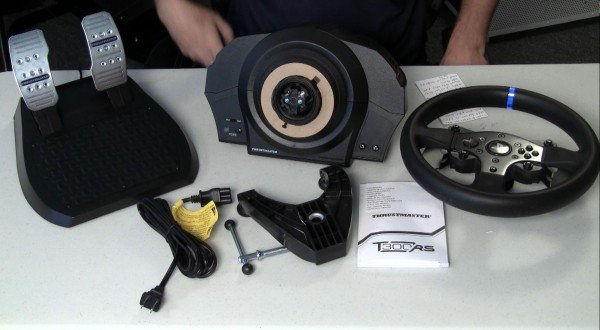 Both rims are practically identical and have 9 buttons. The PS4 rm has 9 actual buttons where as the GTE rim has 6 plus the manatino toggle which makes 8 and then you can press that for the 9th button. Both rims also have a 4 way D pad. The base also has two buttons on the right side for a total of 11 buttons. The buttons in general all have a good feel to them with a positive click. The manetino switch on the GTE rim is a little flimsey but I’ve never had a problem with it.

The T300 base is also compatible with all of the current Thrustmaster rims including the TX rim. I tried it on both the PC and PS3 and they worked great. The F1 and GT rims work perfectly as well.

On the left side of the base there’s a switch that allows you to change it from PS3 to PS4 functionality. To use it on the PC you need to have it in PS3 mode. 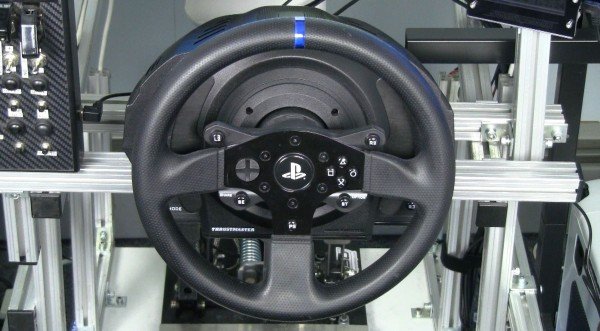 Speaking of the TX, this setup is very similar except the T300 comes with a better rim and 1080 degrees of rotation versus 900 on the TX.

The review on the PS3 covered the pedals that come with the T300 so I won’t be discussing them much for this review. They work fine on the PC and make for a good starter set but lack decent progression on the brake and no clutch. If you want to do some serious sim racing, I recommend getting a good set that’s compatible with the T300, or a stand alone set that you can plug into a USB port separately.

The T300 RS is compatible with all of the current Thrustmaster pedals including the T500 set and the T3PAs which I highly recommend over the stock set. 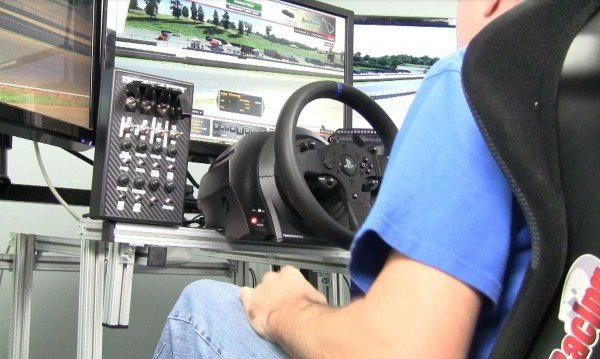 Those of you that are new to PC racing, you’ll need to install the latest driver that you can obtain via the Thrustmaster website. Occasionally they have firmware updates as well and the driver comes with a firmware updater. As of this show, the firmware that comes loaded with the wheel when it delivers is current.

Before I get to how it performed in game, these are my Thrustmaster Profile settings:

I tried the base with iRacing primarily, Assetto Corsa, rFactor 2 and F1 2014. Of those 4, F1 2014 had the weakest Force feedback and I thought that maybe it was the T300 RS since it’s force feedback isn’t as strong as the T500 RS with identical settings, but it was how they programmed F1 2014.

In iRacing, Assetto and rFactor 2, I had to turn it down as it has very strong force feedback.

In iRacing for instance, I ran a ton of the RUF the last few days as I attempted to make the field for an Endurance race and I kept having to dial it back. These are my settings in iRacing:

I have linear on

In regards to damping, David Tucker who’s the force feedback guru that works for iRacing recommends you turn it off with the in game slider and then adjust it via the app.ini. You can find it if you go to “My Documents” and then iRacing, open the app.ini file with notepad and go to the section titled force feedback. There you will find an entry that’s called

Maximum amount of damping to apply, adjust this to set damping level, values between 0.05 and 0.2 are best. Make sure you leave the extra 4 zeros on the end of the setting.  Basically that adds weight or friction to your wheel if you want a heavier feel. I would guess that if you’re running ovals, you would want to leave this off and remove all damping. I personally like it with .02

Now your results may vary and you may prefer something completely different. There’s a lot of threads in the iRacing forums that discuss settings, so play around with it until you find something you like.

Assetto Corsa settings are pretty basic and do the job. There’s 5 or so sliders that can be tailored to how you want the force feedback to feel.

rFactor 2 you can adjust a few things like smoothing and a multiplier.

No matter which title you run of the three hardcore sims I mentioned, You want to make sure you don’t set your force feedback too high or you could experience something called clipping. Basically what that means is you’re overdriving the force feedback motors and essentially could be getting clips or miscues. You can compare it to overdriving your speakers in a sound system in a way.

iRacing and Assetto Corsa both have an in game meter to monitor this activity. In for Rfactor 2 a well known modder named Tech Aide has created a plug in and I’ll put a link to it here in the description of the show.

Force feedback in general is not an exact science. Of the three major sims I mentioned, all provide very good force feedback. I personally like iRacings the best. Assetto and rF2s is mighty good though as well. F1 2014 on the other hand, just barely does the job and it’s more canned then actual real time effects. I even maxed Forces up to 100 in the profiler and all maxed in game. It still felt pretty good, but not like the titles I mentioned above.

A lot of people have asked me how it compares to the T500 and which wheel do I prefer. I like both wheel a lot but I currently prefer the T300. If you prefer a wheel that has a heavier feel with a tad more built in damping, you may want the T500. I feel that the T300 turns a bit quicker and has a smoother feel when turning.

Some also have asked if the T500 is compatible with the PS4 and it does work with Drive Club and The Crew but doesn’t work in the PS4 menu or User Interface until you boot up the game. The T300 on the other hand is fully compatible.

The other big difference between the T500 and T300 is the set of pedals. The T500 pedals are much more substantial, have mods you can purchase, a clutch and you can invert them. But, you can get a T300 RS and a set of T3PA pedals for less than what you can get a T500 RS for most of the time and I like the T3PA pedals very much.

PS3 / PS4 & PC compatible
Smooth turning
Great feeling FFB
Comes with GTE or PS4 rim depending on which version you get although the GTE version doesn’t seem to be available here in the states
Compatible with all current Thrustmaster rims
Smaller base than T500. More practical
Same hard mount points as T500 on the wheel and pedals
No External Power Supply
1080 degrees of rotation down to 270
1028 Steps or bits of movement in the pedal set while attached to the wheel.

No clutch
Pedals could have been better with some progression on the brake. I could live without a clutch, but really like a progressive brake.
Expensive for a set without a clutch and or gated shifter included.  I’m sure the price will come down in time.

I mentioned this in my TX review, that it would have been great to have a base to purchase separately, then you can buy your rim of choice and a set of T3PA pedals. If it was like that, a Rim, base and T3PA pedal set would go for about the same price as the T300 complete set. Maybe even come up with a rim based on the TX 458 Italia without the Ferrari branding to have this package sell for under $300 with the 2 pedal set. I could have also lived without a T3PA set if the brake had some decent progression.

I highly recommend this wheel and like I mentioned above, the pedals are good enough for someone just getting started in sim racing. You can always upgrade to a better pedal set in the future.