A few weeks back in an episode of This Month Inside Sim Racing we reviewed the Sim Instruments Dash. With our ability to to now add more depth to our reviews, I thought it would be cool to go back and “Segment” this one and add a little more to it after using it for a few more weeks. If you click play on the video above, it starts right at the review.

Looking for an external dash solution for your new souped up sim rig? Sim Instruments may have the answer for you.  Siminstruments, based in Brisbane, Australia, was founded by two friends (James & Brendan) who both share a common interest in all things related to motor-sports and PC sim racing. James has been sim racing on and off since trying out some racing games on a friend’s Commodore 64. He then started sim racing again a couple of years ago and signed up with iRacing.com.

“Wow, what a cool experience, it’s more than a sim, its a community.” 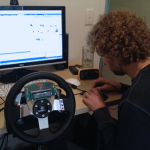 Enter Brendan. James and Brendan been friends since school and like nothing better than to get out on the go kart track for a bit of wheel to wheel action.  James then convinced Brendan to get himself a wheel and join the iRacing action and he also became hooked.

This new found sim racing experience led them to look for any competitive edge or as they put it “cool piece of kit for sim racing” that they could find.  A lot of the hardware at the time didn’t offer the features they were wanting. James tried to use an application on his phone but getting and reading an sms at 250kph caused his race to end sooner than expected more than enough times.

Then James figured,” I’m a developer, I write software for a living and have enough electronics knowledge to build my own Dash.”

First up was a row of leds for shift lights, next was a gear indicator, then a lot of prototyping different designs. Finally he got to the stage with his design that Brendan was keen on one too. It soon dawned on them that there would be more of  sim racers like them out there who would be looking for a product that could help you improve your sim racing experience.

Enter Siminstruments, a company developing sim racing products for simracers by simracers. The products we wanted to buy that didn’t exist…

The SimInstruments includes the Dash hardware and software. Just plug it into your PC with the supplied USB cable, run the install wizard to install the Siminstruments software, open up the program you just installed and you’re ready to race. It incorporates multiple display devices in one hardware solution including gear indicator, RPM shift indicator, LCD digit display, warning lights and the unique LCD display with RGB (changeable color) backlight. 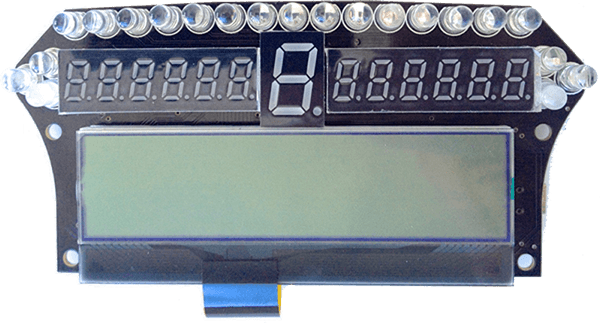 Here’s what the Sim Instruments Dash will do for you.

The Telemetry output options include:

The LCD can be fully customized in regards to how the telemetry is displayed. It can be configured through the drag and drop Siminstruments software to showy telemetry on various positions on the display.  It’s possible to change the color of the LCD for a range of in-car and in-race telemetry and events including RPM, delta times, split times and yellow flags. The RPM shift indicator can be configured for each LED to light up sequentially in line with the car’s revs, or in a 3 stage configuration with each of the LED’s in one bank lighting up together and then moving on to the next bank in line with the revs. Full warning light customization is also available through the Dash’s bank of 6 warning lights, consisting of 4 x LED and 2 x RGB (changeable color) warning lights. The 4 LED’s can be customized to display various in-car warnings including, low fuel and high temperature while also having the ability to display in-game warnings such a yellow flags, blue flags and black flags.

If you want to assign different colors to different warnings, the RGB’s are able to deliver this ultimate degree of control for both in-car and in-game warnings for users.

We received two versions of the Sim Instruments One that mounts directly to the Fanatec Clubsport wheel, and one that you can mount anywhere. The displays are for the PC only and currently work with iRacing with plans for other titles as well. It uses proprietary software so Sim Instruments provides everything. They go for about $160 and are shipped worldwide with shipping being additional based on your location.

Since the mount for the Clubsport wheel works perfectly with 80/20 tubing, I initially that version on my rig. It mounted up perfectly to a piece I was using for my Z1 Sim Dash and Sim Instruments provided two M6 bolts that worked great ! If you do have a Clubsport wheel to use it with, it mounts nicely at the top of the base. I then tried the other one as well and due to it being light weight, I mounted it with some velcro the same way my Z1 was mounted.

These displays are best used when using triple screens or a very close up field of view. Some people ask whats the point when a lot of the information can be displayed on screen and usually it can. But it’s nice to be able to put it where you want and free up that viewing space for racing. Also makes your sim racing setup feel more like a real car.

One of my concerns with companies like this, is how long will they be around to support their peripheral. I like the software that Sim Instruments is creating, but they need to get on the other titles right away.  Nothing against Brendan and James and I hope they’re making these dashes and their other components for a very long time. That being said, there’s already another sim company that supports the Sim Instruments dash. Third party support is now available for the Dash from SimSli to use the Dash with titles including rFactor, Project CARS, SimBin Gtr2 and SimBin Race 07 which is a dated list of software to be honest (except PCars).

I did love how it worked with iRacing and could see myself having it on my chassis full time, but I would need a lot more support for other titles. For instance, I’m also reviewing a dash from Renovatio that supports more than 30 titles.

These displays are very high quality, with the only current drawback being software compatibility with titles other than iRacing. If they come along on their software development*, I mentioned keeping it on my chassis full time and I will.

*An update to this review is that they have a beta available that is working with rFactor 1 & 2, F1 2013 and Assetto Corsa. Would like to see Game Stockcar 2013 and Project Cars added to that list. Seems like they are working on it though ! Kudos to James and Brendan.

Speaking of them, I’d like to thanks Brendan and James for sending us not one, but two dashes to review. We will definitely be holding on to these for future use.

To check out a Sim Instruments dash and the other dash components that James and Brendan make, go to www.siminstruments.com.