Presenting our review of Sébastien Loeb Rally Evo on the PlayStation 4 and PC. Sébastien Loeb is from developer Milestone, who had previously brought us WRC 1-4.  Free from the chains of producing an annual WRC title, Milestone took advantage of the new found freedom – content and schedule wise – to make a rally title that mirrors the career of nine time WRC champion, Sébastien Loeb.

Before diving into the pros and cons of Sébastien Loeb Rally Evo, let’s go over some stats.

There are 15 different game modes, including career and the ‘Loeb Experience,’ which allows you to retrace Sébastien’s career, piloting the same car and stage combos he did on his way to being the greatest rally driver of all time.

Now that the stage is set, let’s start with the pros and cons.

Now that you know what we did and didn’t like about Sébastien Loeb, let us explain ourselves. 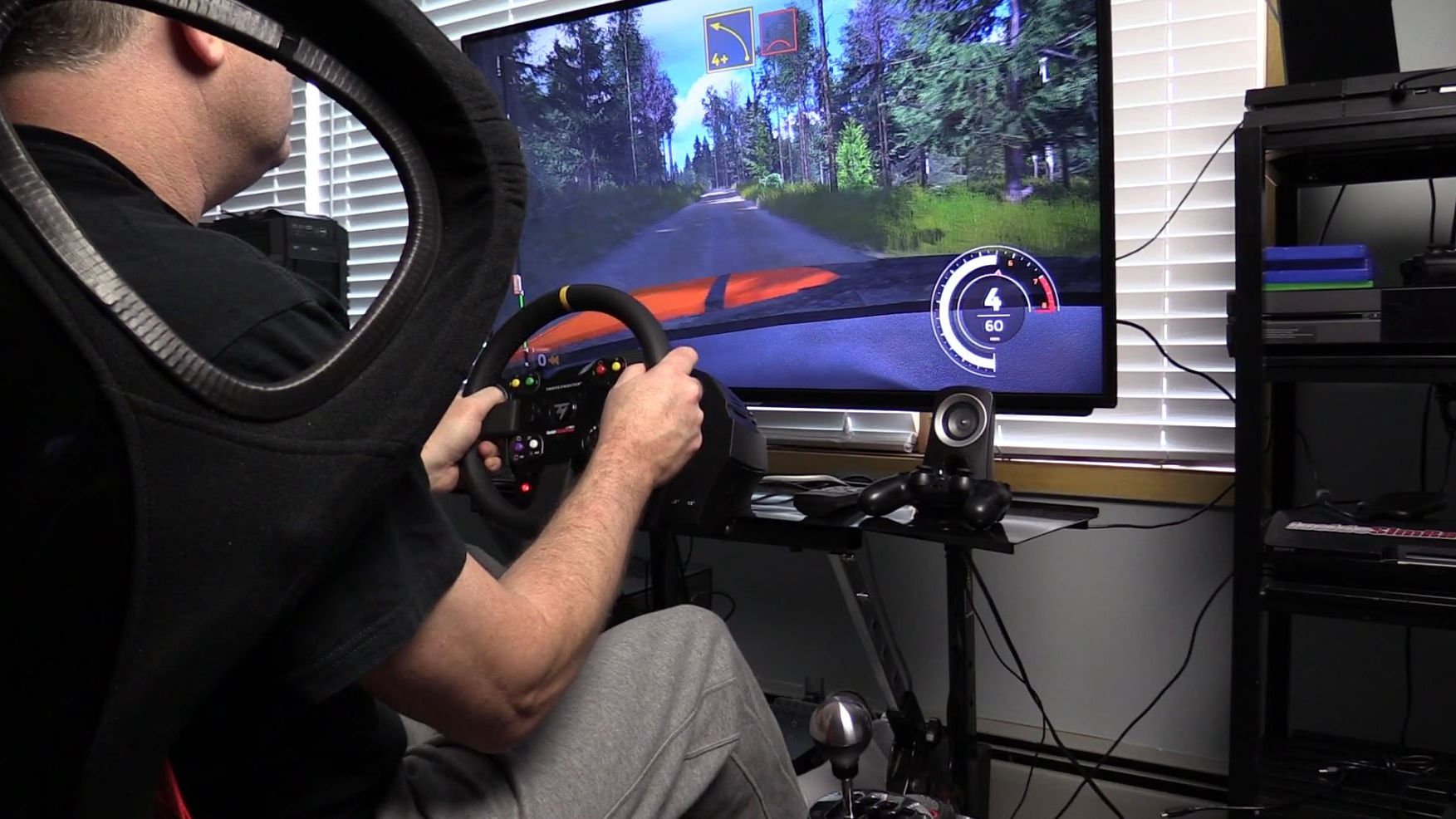 Both the physics and force feedback of Sébastien Loeb are quite good.  The car responds as you expect it to and there’s always a good amount of weight in the wheel.

The game does have a fair amount of input lag, but like some other titles, such as Forza Motorsport 6, the lag is more a visual annoyance and didn’t pose an issue.  With that said, setting the degrees of rotation to 540 from 900 both in-game and in the Thrustmaster control panel did help the car feel more responsive.  On the PS4, changing it in game will change it in the wheel as well.

While physics were strong across the board, they really stood out when transitioning to different road surfaces. Sébastien Loeb does a good job of differentiating the feel between dirt, gravel, snow, asphalt, wet conditions, cold conditions, hot conditions, etc.  In fact, Sébastien Loeb asphalt physics feel better than rival DiRT Rally.

The car list, which is heavily influenced by Loeb’s career, is very deep and diverse, giving you a good number of licensed cars to drive.  As with the road surface, the physics clearly transmit whether you’re driving a front, rear or all-wheel drive car, giving every car a unique feel.

The car models are also nicely done, especially when damaged.  Physics wise, the damage model is hit and miss.  Damage will effect steering but you can’t outright kill the car.

The cars feature a good amount of customization, including liveries and tuning.

Overall the camera views are pretty good.  The dash camera is perfect and was a good alternative when the usually sufficient in-car view got too handsy.

The circuits are also well done.  The circuits are much longer and narrower than past Milestone efforts, potentially thanks to the GPS data used to build them.  This makes them very challenging, and at times, unforgiving.

A definite highlight of Sébastien Loeb are the game modes.  Career has good pacing, starting you off in lower cars and shorter stages, and allowing you to quickly or slowly – depending on the difficulty level – move up to faster cars and longer, more challenging, stages.

If you don’t have the patience for that, then you can try the Loeb Experience, and jump around to different cars as your heart desires.  And naturally there’s a quick mode, that allows you to take any car from your garage or rent a car you don’t own and take it for a one off event.  It’s nice to have all these options and Milestone should be commended for not only including them, but for how well they’re designed.

One of the more enjoyable styles of racing in Sébastien Loeb is rallycrosss.  The combo of entertaining tracks, differing surface physics and good AI make rallycross a lot of fun.

The final pro is the overall performance of Sébastien Loeb on the PS4.  While 60 fps is debatable, it certainly runs above 30, and – somehow – looks better than the PC.  Most of all it just works, with no noticeable bugs or graphic stutters. Replays do show some stutter but we never came across an issue during gameplay. A place it could have been an issue is in rallycross and it definitely ran great.

Now the PC version is a different story and this roles us into the cons. 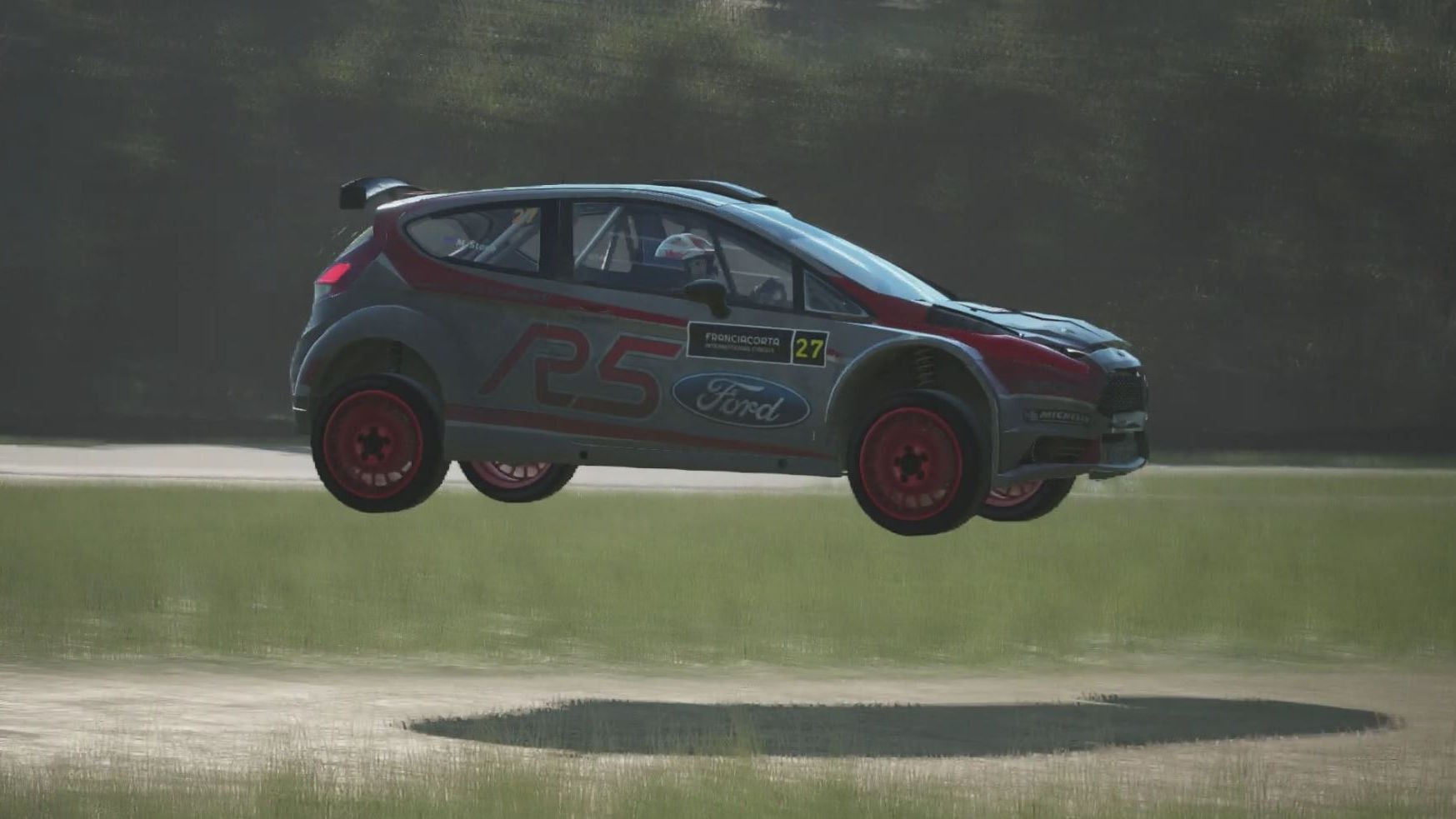 The game runs better on the PS4 than our PC’s, which are no slouches.  With graphics turned up, we were only achieving 45-50 stuttery fps at 1920 x 1080.  Turning everything off, only improved to 60-70 stuttering fps.  Comparing this to the recent benchmarks we did on John’s system with the EVGA GTX 970 FTW+, Sébastien Loeb is by far the worst performing title.

And this is only 1920 x 1080, inexcusably, the largest resolution.  Usually when we say that a title isn’t triple screen enabled, we mean it doesn’t render three screens, it just stretches the middle screen across all three. Sébastien Loeb doesn’t even do that.  In fact, it doesn’t support ultra wide monitors, like John’s 2560 x 1080 BenQ XR3501, either.  What the hell?

Besides allowing 144hz refresh rate – which we couldn’t take advantage of because our frame rate were so low – the PC version screams console port.

As for the graphics themselves, they’re not great.  Some circuits are better than others, but overall, there’s a lack of textures and shading.  While we appreciate the “cleaness” of the graphics – no overdone post processing filters – there’s a fine line between clean and dated, and this leans more towards the latter.

The lack of eye candy wouldn’t bother us so much if the title was running at say 200 fps, but given the terrible frame rates, it’s unforgivable.

Only One Input Device

While graphic performance is bad enough to be a showstopper on the PC, it gets worse thanks to only allowing one input device.  This means that if you are running different brand wheels and pedals, you’re screwed without an adaptor.  For example, John was forced to switch out the Fanatec ClubSport V3 pedals that were directly plugged into his PC, with Thrustmaster T3PA pedals that plug into the Thrustmaster T300 wheel base, eliminating the second, unsupported, input device.

While this is common for the consoles, PC sim racers are use to titles that support multiple inputs and allow them to mix and match hardware.

Another major fatality of the one input decision are hand brakes.  We can’t use either our Fanatec Clubsport Handbrake, or our Thrustmater TH8A shifter that can be run as a handbrake (although it does work as a shifter, plugged into the PC via usb or PS4 via the DIN port on T300).  How are you supposed to get the most out of a rally car without a handbrake?

Spoiler, you don’t, making the one input decision look more idiotic, and further confirming the PC version as a straight up console port.

And speaking of console port, the PC version is super buggy…like a console port.  Bugs include:

Like the graphics, the sounds aren’t up to snuff either in Sébastien Loeb.  The engine sound is ok on some cars but everything is else is just bad.  Road surface sounds, impact sounds, co-driver, all bad.

Speaking of co-driver, boy is he trying his best to kill you.  While the majority of the calls are good, about 10% of the time they’re either too late or just wrong.

Worst of all, when they’re wrong, he isn’t erroring on the side of caution.  Acute angle turns are labeled a 2.  Sometimes 3 turns are tighter then 2’s.  Our favorite are 4’s which maybe mean coast and downshift or require you to slam on the brakes.

These co-driver shenanigans add up to you not really trusting him and being forced to memorize the circuits, which misses the whole point of rally racing.

This starts with the minimal graphic settings options on the PC, all the way to our favorite, not being able to disable the driver’s arms and wheel in cockpit view and move the seat forward.  Between those settings, the auto calibrate feature is poorly done, with the on-screen wheel not even trying to match your wheel.

The few times we tried to run in multiplayer, there weren’t any people to race against.  It could improve or be time of day related, but it wasn’t really a game play option for us. 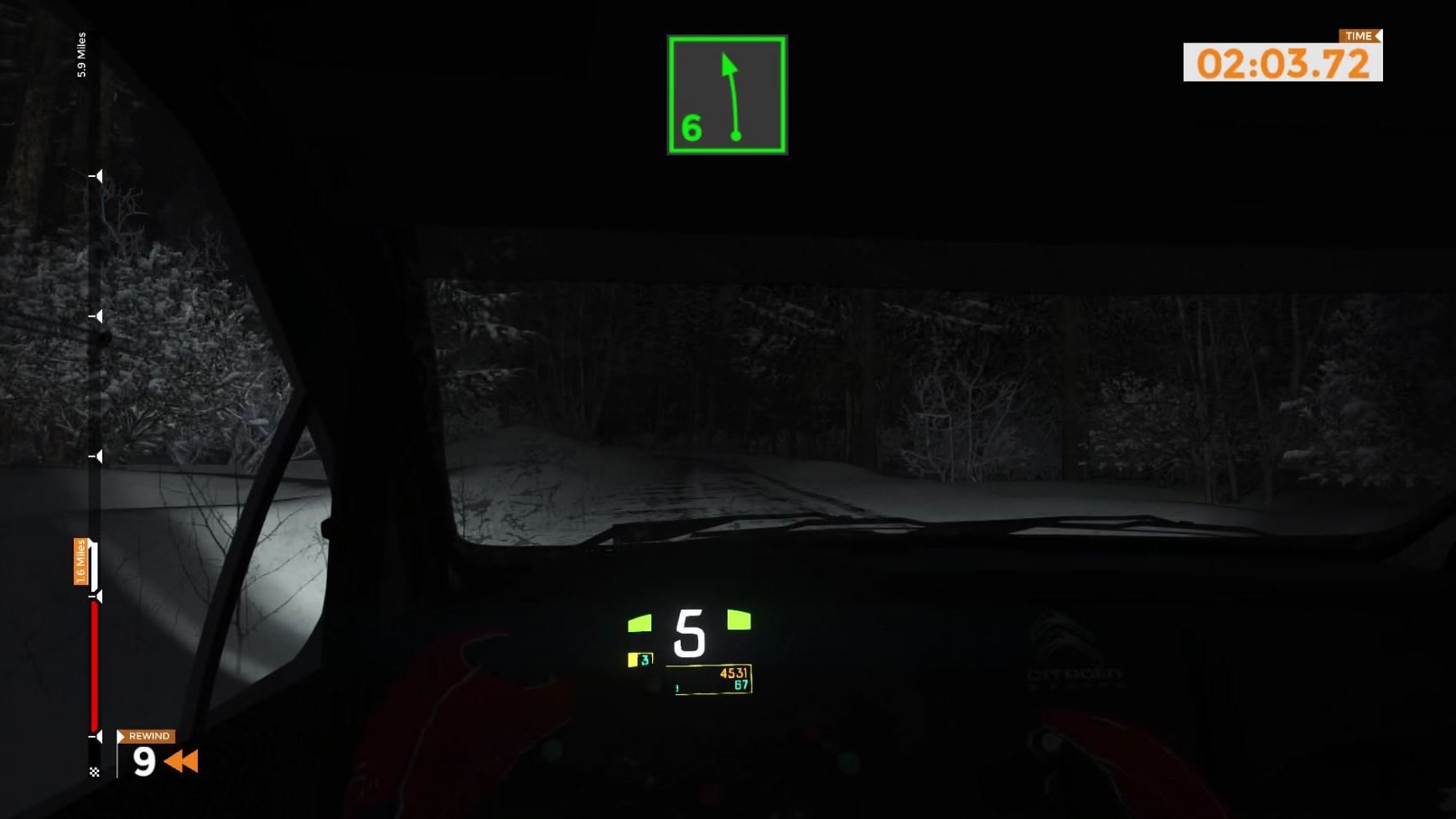 Sébastien Loeb Rally Evo is a mixed bag.  There’s lots of positives and just as many negatives.  Thankfully, most of the positives are on the game play side, with good driving dynamics and well thought out game modes.  On the negative side, hardware compatibility and poor performance are so intrusive, that they can overshadow the positives.

This leaves us with two different opinions of Sébastien Loeb Rally Evo on the PlayStation 4 and PC.  In our opinion, the PC version is a pass.  Sloppy porting, terrible performance, low screen resolution and one input device make the game way too much of a headache and not enjoyable. There may be some work arounds for some people with various Nvidia or AMD control panel options, but none helped us at all .

Hopefully, Milestone steps up and updates the PC version. Without the yearly WRC license/deadline, there’s no reason for Milestone to not support Sébastien Loeb further and send out updates.  Would be great for them to look at this more like an Early Access title and update it based on our feedback as well as what the community is saying.

The PS4 is a different story.  Without the bugs or expectations of a PC – triple screens, multiple input devices, higher frame rates – the good working PS4 version was able to show off the best attributes of Sébastien Loeb, and had us engaged and entertained.  The PS4 version really does give DiRT Rally a run for its money.  Unlike the PC version, we really had a hard time walking away from Sébastien Loeb Rally Evo on the PS4 due to how much fun we were having.