Welcome to our extensive Review of the Next Level Racing F1GT Formula 1 and GT Racing Simulator. While in many ways the F1GT offers up similar features as other racing simulators, it does have one party trick, two driving modes.

As the name suggests, the Next Level Racing F1GT can be raced in the more traditional upright GT seating position, or can be transformed to the low-slung seating position of a Formula 1 car. 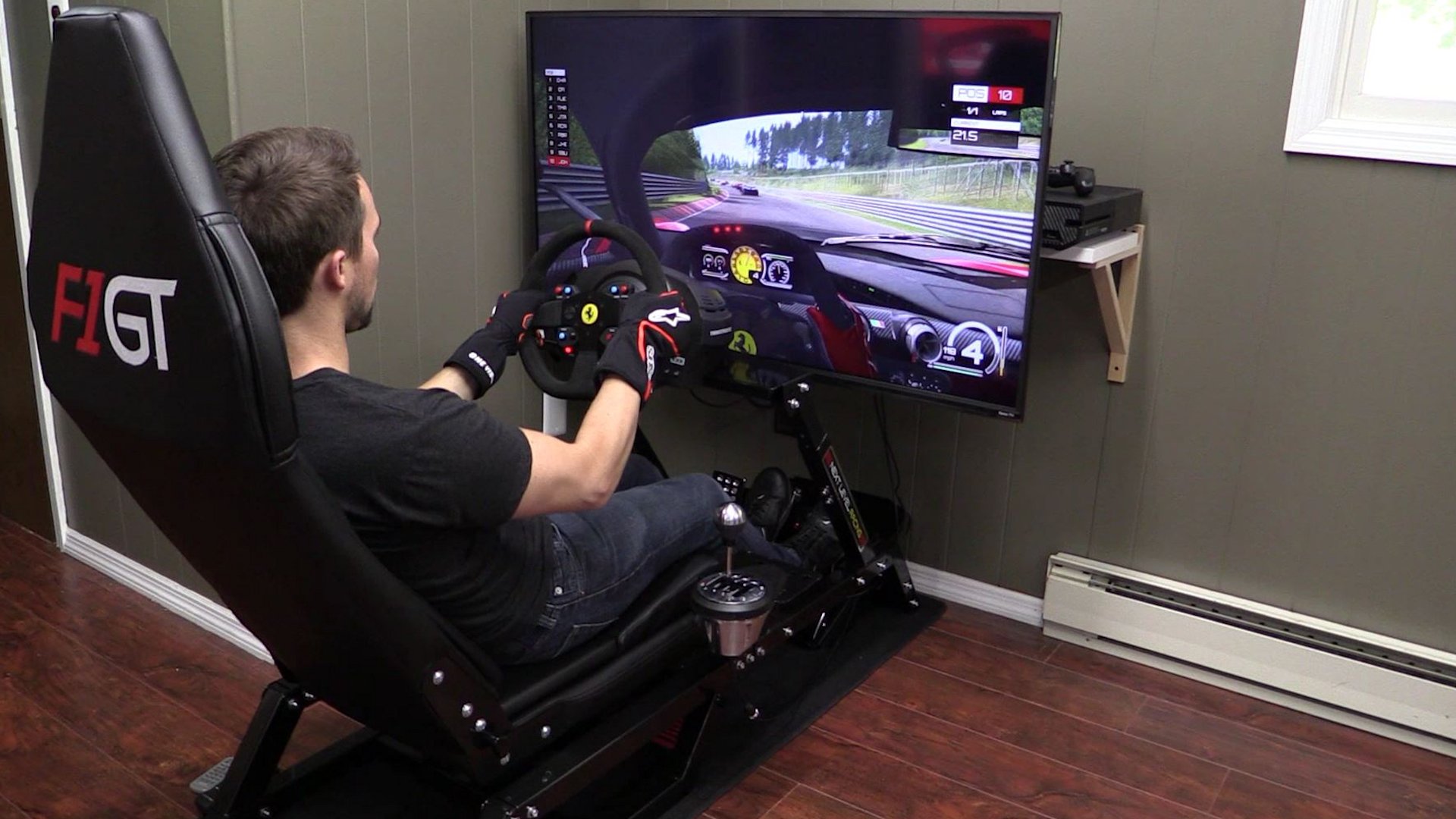 For this review, we’ve distilled everything you need to know about the F1GT into three categories; Pro, Con or Neutral.  The first two need no explanation but the latter might.  Think of a Venn diagram.  One circle is Pro, the other is Con.  Where they intersect is Neutral.  Neutral topics are topics with pros and cons or are just notable.

The F1GT arrives in one, fairly compact, but 70 lbs box.  All the parts come nicely bubble wrapped, and once unwrapped, reveal something we haven’t seen in a simulator before, nuts and bolts already in their corresponding hole.

This simple step eliminated much of the confusion that comes with assembling most simulators, while any remaining confusion was squashed thanks to the simple, clear, and in English (more of a rarity than you would think…) instructions. 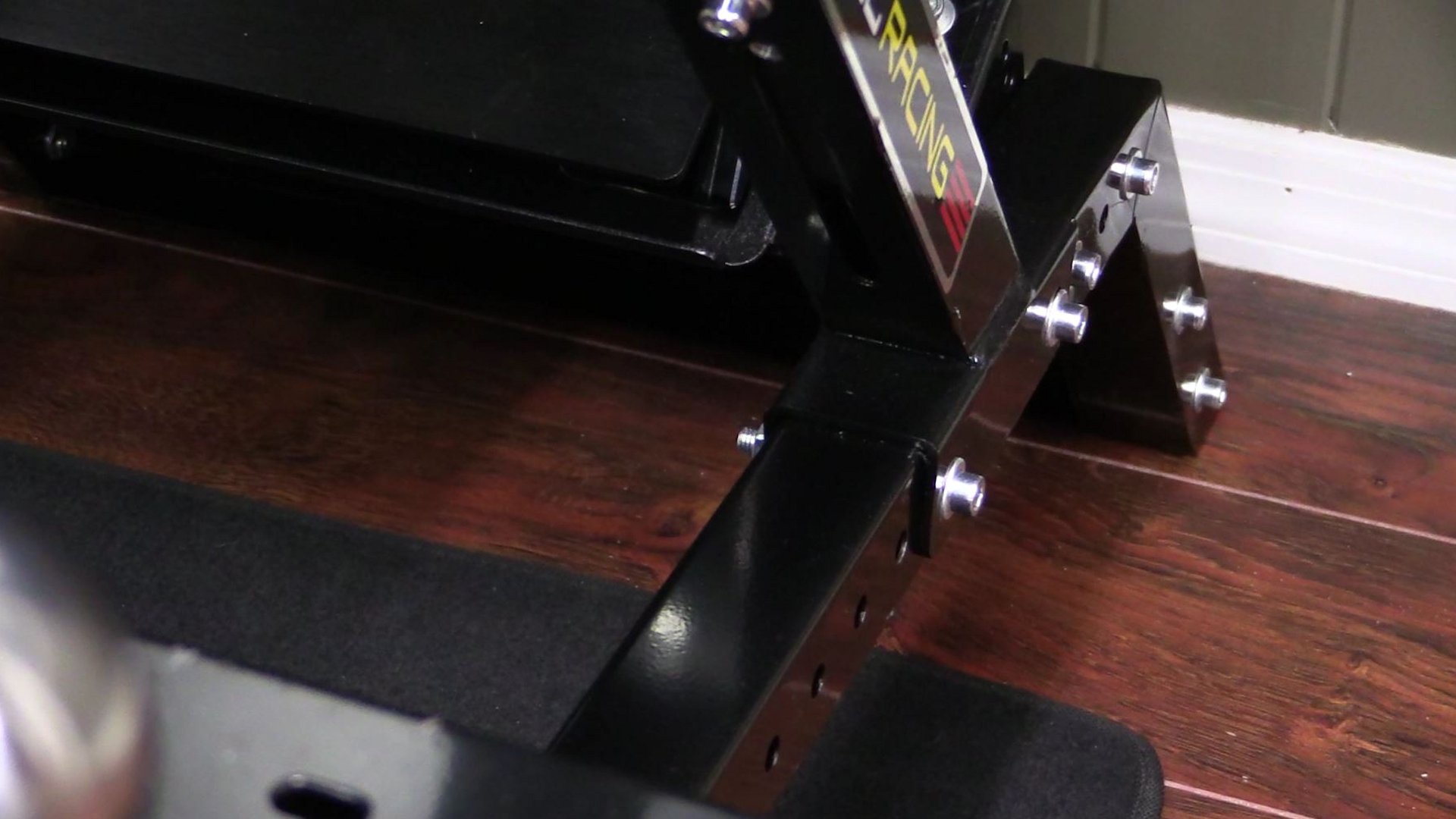 I really love the minimalist design of the F1GT.  It’s form follows function, resulting in very few parts.  The streamlined look is assisted by the murdered-out black look, with only some classy branding here and there.

Not much more to say, the F1GT is a good looking piece of kit. 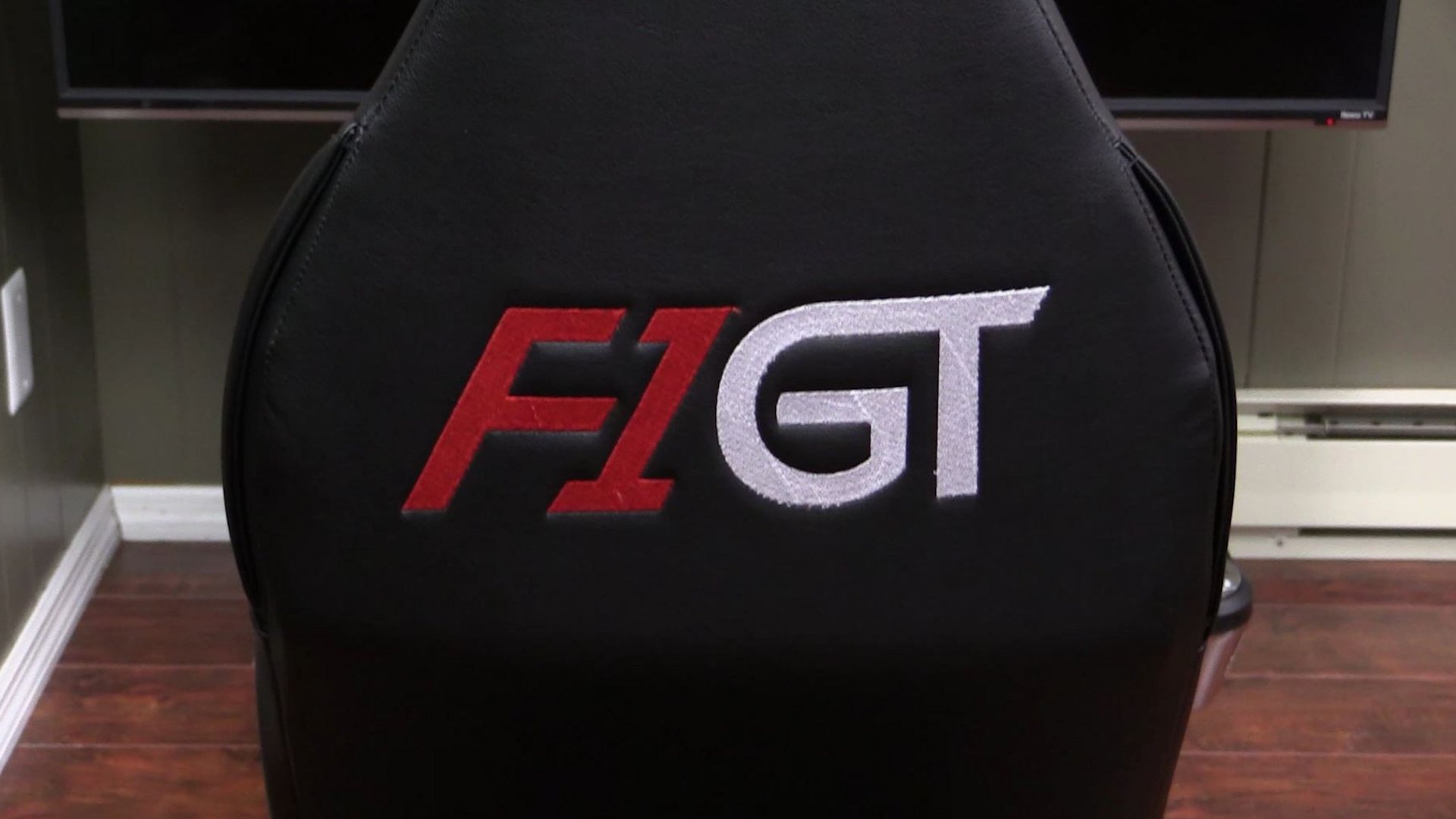 A good seat is comfortable and supportive.  The F1GT has a good seat.

While on the thin side, the F1GT seat bucks the notion that a seat must be thick to be comfortable.  It’s no Lazy-Boy, but it has sufficient padding – and more importantly – the right shape, with the seat hitting you in the right places.  Long durations of seat time was not an issue.

Aesthetically, the seat carries the minimalist theme of the rest of the F1GT and looks right in place.  It has clean lines, and the – we assume – pleather is pulled taut and is almost nice enough to make you wonder if it’s the real stuff.

In the keeping it simple theme, the seat is devout of side bolsters, which makes a lot more sense for non-motion simulator than the giant side-bolsters you see out there, including on Next Level Racing’s own GT Ultimate V2.  The lack of side bolsters also makes getting into and out of the F1GT easier, although we’ll have more to say on that later.

Pro: No Perceivable Flex While Driving

The rigidity of the F1GT was a major talking point when the images first appeared online.  Many people asked out loud if the single hoop steering deck and the cantilevered pedal plate (in F1 configuration) could be used without flexing?

The answer?  Yes, at least if we are talking about perceivable flex.

I could not feel any movement while driving.  To test the F1GT’s rigidity, I used the Thrustmaster TS-PC Racer’s strong force feedback to stress the wheel deck assembly and Fanatec’s ClubSport Pedals V3 with Brake Kit assisted load cell to stress the pedal plate.  Even with those stronger pieces of equipment, I couldn’t feel any movement.

With that said, the video footage does show some movement in the wheel deck.  So if the wheel deck moved, how can flex be scored as a Pro?

Like in racing, everything that is stressed exhibits some form of strain (movement).  The question becomes how much, and is it too much?  In my opinion, the amount of movement is acceptable because I never noticed it while driving, which means it didn’t negatively affect me.

At the top, we asked if the F1GT is able to successfully pull off both the GT and F1 seating positions?  That would be yes.

The GT position propped me up as you would expect and I was able to get my steering wheel right inline with the on-screen wheel, helping to get the field of view (FOV) as close as possible.

The F1 seating position dropped your backend down and lifted your arms and feet up.  While the wheel technically drops in F1 mode, your body drops further, putting the wheel at shoulder height.  This gives you the “looking over the wheel” feel of being in a formula car, which is cool.

In fact, the word to describe the F1 seating position overall is “cool.”  Nothing against the plenty serviceable GT seating position, but the feeling of having you body down low and your arms and legs up high is really different and, well, cool.

Another welcomed surprise was the hybrid seating position.  Having the seat in GT position and the pedals in F1 position created a position that felt not only comfortable, but appropriate in some cars.  It also gives you an excuse to not move the pedal deck back and forth when switching modes.  More on that later.

At $499, $699 AUD, £499, €599 the F1GT comes in at a real competitive price.  Not only is it a nice price for the F1GT considering the Pros we’ve already covered, but it’s nice to have another simulator in a price range that is “reasonable” by a larger percentage of sim racers. 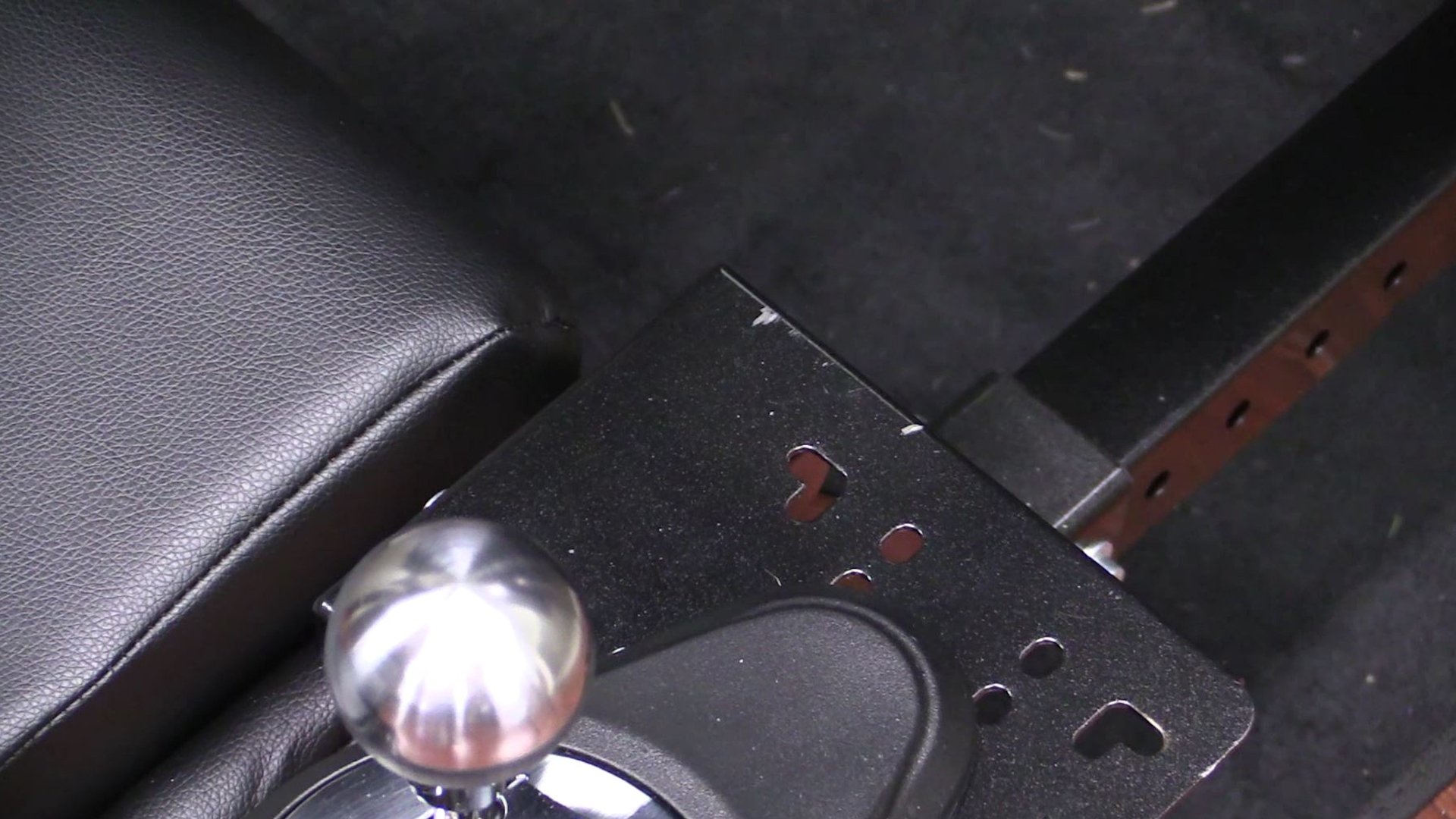 I really wanted to put the quality of the F1GT into the Pros categories.  All the parts and pieces have a quality feel, finish and weight.  But alas, some parts arrived with scuffs.  Most notable was the shifter deck which had a decent size scuff mark on it.

There’s no way to say when the blemish occurred, but if I had to guess, it would be Chinese manufacturing, making the F1GT part of a list that includes almost every simulator out there.  Just part of the deal when you’re shopping at this price range, no matter the manufacturer.

There are pros and cons when it comes to the pre-drilled holes on the F1GT.  On the pro side, it accepts all Logitech and Thrustmaster wheels, pedals and shifters.  It also accepts the Fanatec ClubSport Pedals V3 with holes for all four corners, a notable step up over the Next Level Racing GT Ultimate V2 which requires you to break out the drill to mount them.

But a couple issues arise on other Fanatec hardware.

First, only the front two holes on the CSL Elite Pedals LC are pre-drilled.  This could probably work, but again, having four holes for a set of pedals is ideal.  Second, there is no front third hole on the wheel deck for Fanatec wheels.  The wheel can be securely mounted with the two bolt holes that are present, but while you’re there you might as well drill the third hole for folks who are paranoid about it. 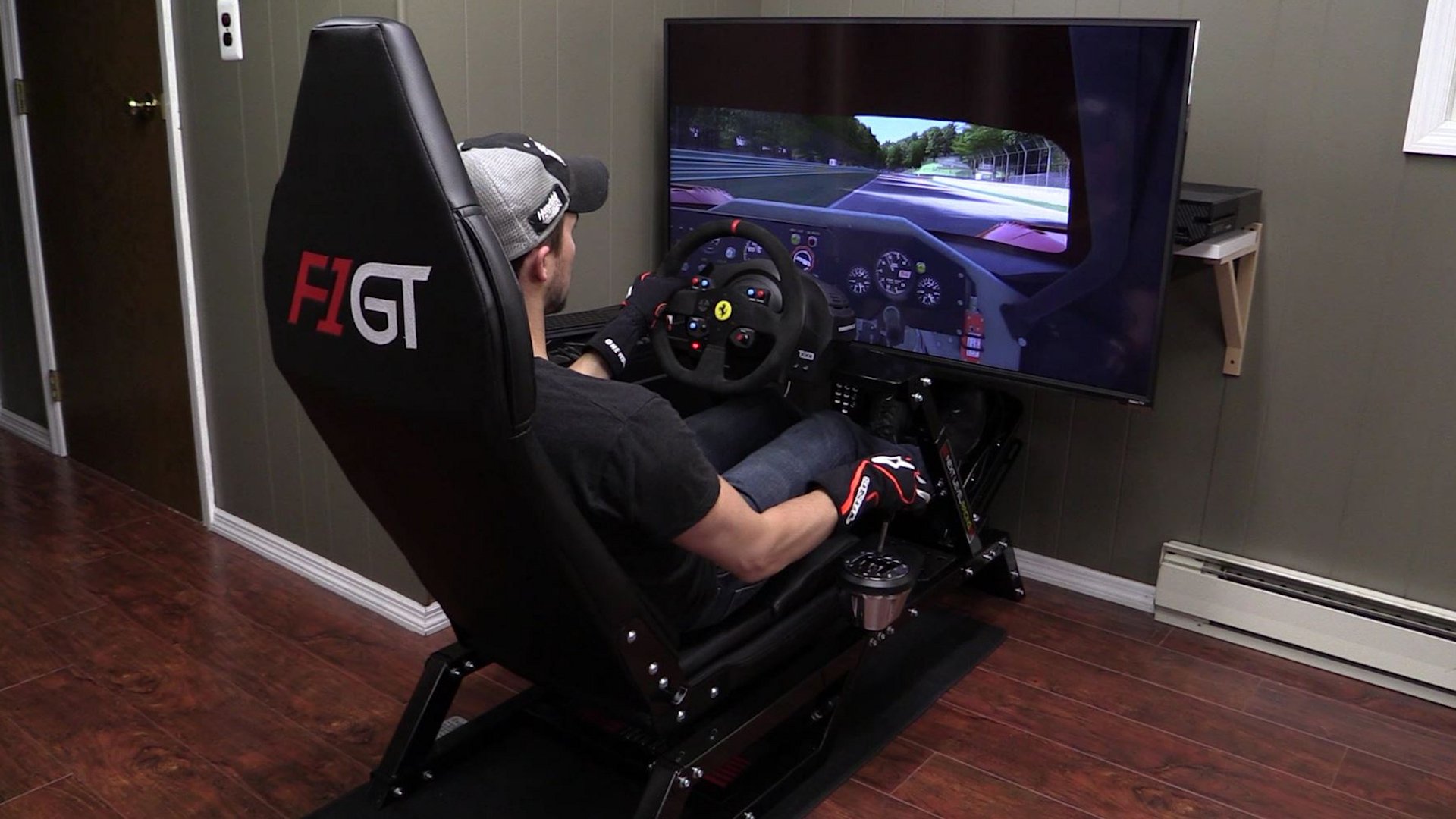 While changing from GT to F1 or F1 to GT seating positions isn’t hard, it isn’t quick either.  Going from one position to the other requires the adding or subtracting of two frame pieces and eight bolts between them, plus two more at the pivot point of the frame that lets the seat stay up in GT or go down in F1 mode.

And don’t forget they need to be nice and tight every time.

This makes the F1GT more of a “change seating positions once a week,” versus “every time I jump from a GT to a formula car.”

Luckily – at least for me – I didn’t have to move the wheel deck and/or pedal plate when going between modes, I just had to slide the seat forward and back, which saved a lot of headache dealing with the weight of the wheel and pedals.  But if aren’t a fan of the hybrid seating position with the seat in GT and pedals in F1, then you should be ready to do work every time you want to change layouts.

Con: Can Make It Flex

Although a Pro of the F1GT is that there’s no perceivable flex while driving, if you want to make the F1GT flex, it will flex.  While the design of the wheel hoop and pedal plate held up better than expected under driving load, their design shortcomings can be shown if you REALLY jerk the wheel around or push on the pedals.

So while it may be outside the limits of “normal” driving conditions, the flex that the F1GT exhibited has to be noted, thus why it is listed as a con. 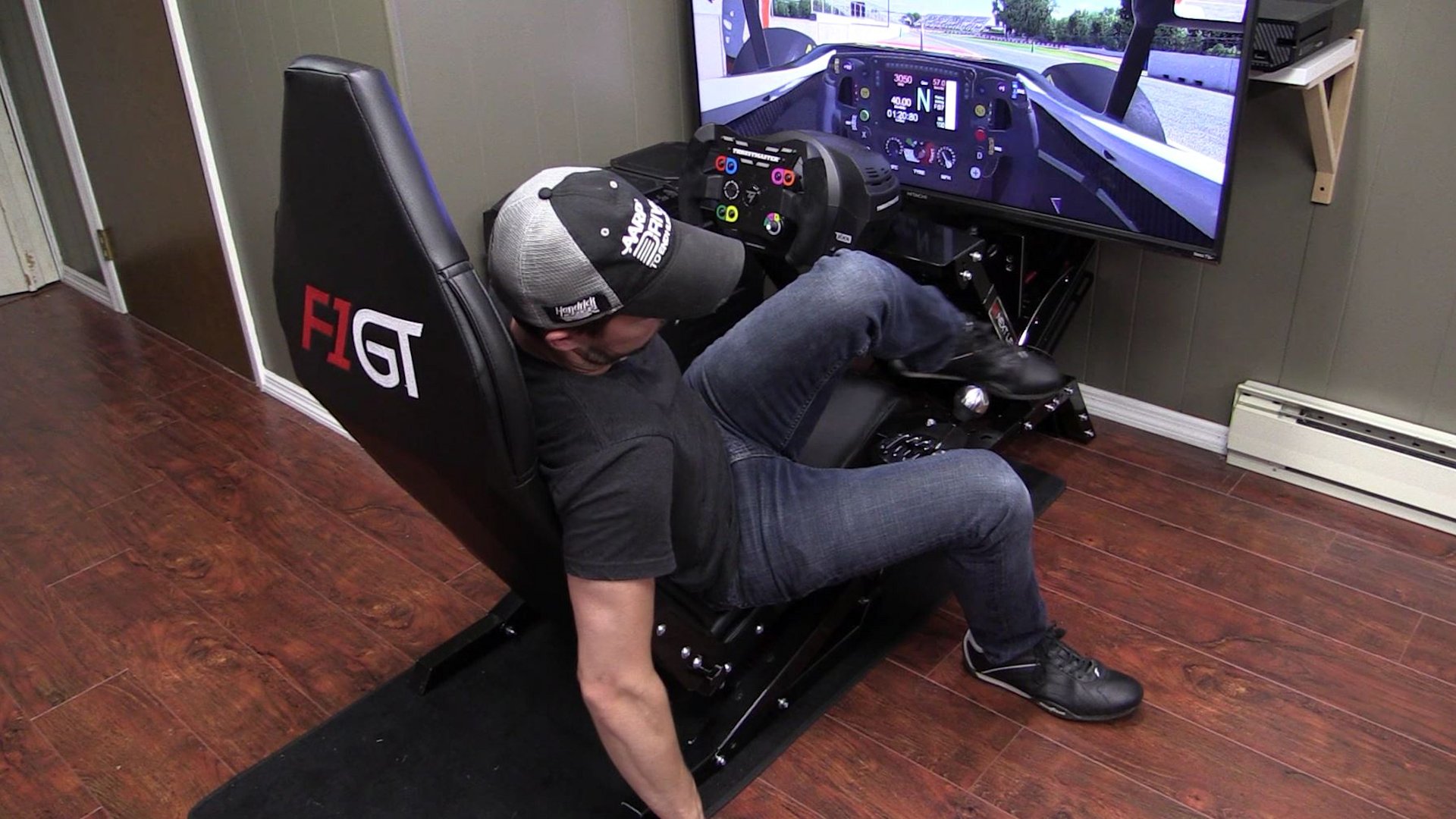 The F1GT isn’t an easy simulator to get in and out of.  It is already low when in GT mode, requiring you to essentially “fall into” the seat, but wait until it’s in F1 mode!  It is on the ground, like, almost literally.  There also isn’t much room between the wheel hoop, long seat base and the seat slider handle which juts out pretty far, making the process of getting in and out a little awkward.

If you’re really tall, or have bad knees and/or hips, this could be an issue.

A simulator not having a keyboard tray will always be a con.  With that said, in the case of the F1GT, it’s not as big of a con as it usually would be.  Because the F1GT is so low, just setting your keyboard on the ground – or on your computer like I did – actually works out well.  It was never out of my reach, unlike taller, keyboard tray-less, simulators.

But if you do like having your keyboard easily accessible for button maps, then you’re going to be hard pressed to find a place to put it, even if you come up with a custom solution.  There just isn’t much space to spare on the F 1GT, making custom details like a keyboard tray, or button box, a real challenge.

Remember when we said that the F1GT mostly nailed the GT and F1 seating positions?  Well now it’s time to explain that mostly comment.

Both seating positions are 90% there.  Unfortunately, the last 10% isn’t attainable.

In GT mode, I wanted to sit up just a little bit more.  But when I adjusted the seat from the middle position to the most upright of the three, I was – uncomfortably – on top of the wheel.

This wasn’t a big con, and I’m not even sure how you make it so that the adjustments are more fine without causing stability issues, but not being able to perfectly nail the positioning I wanted means a Con has to be noted. 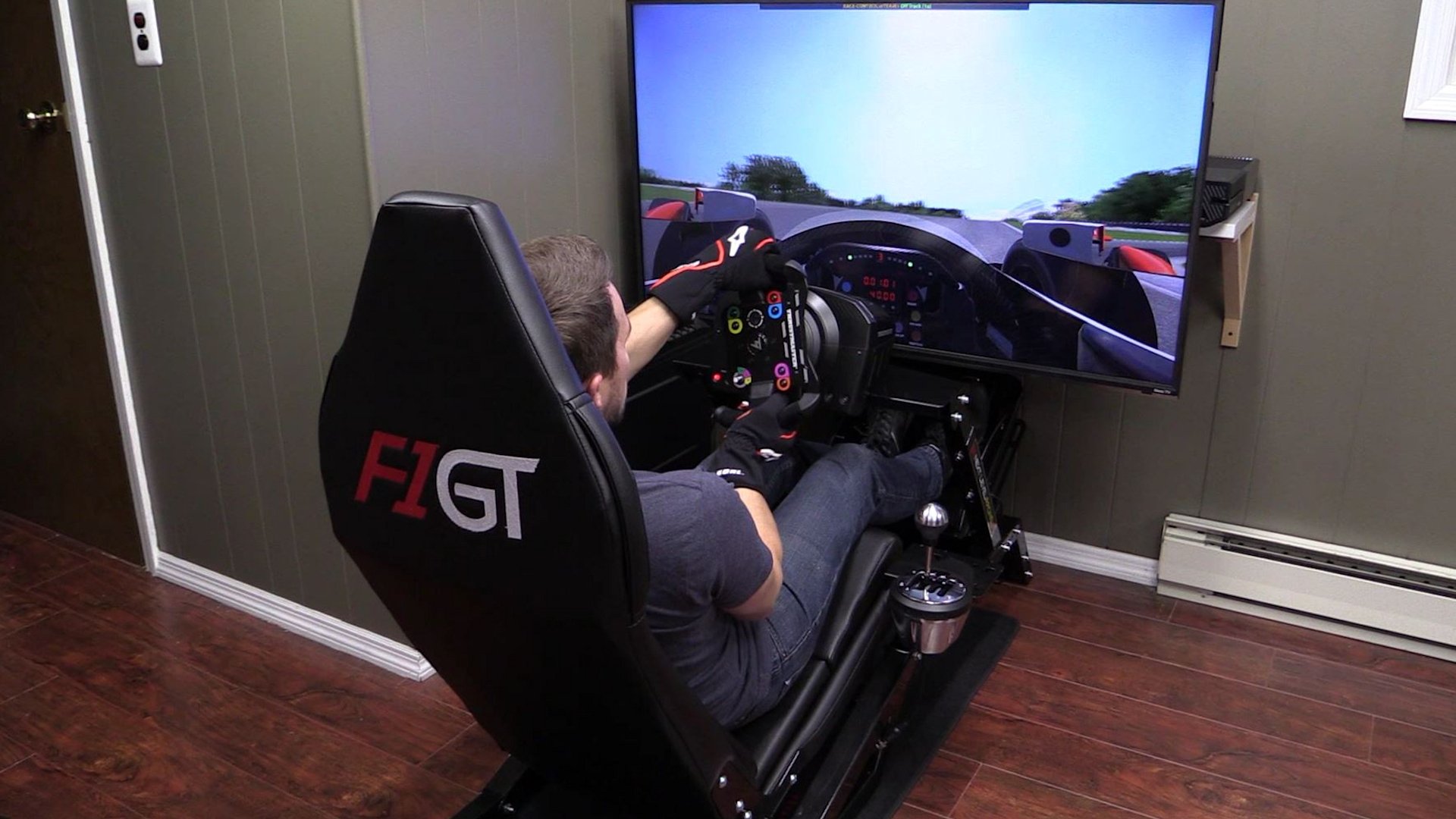 The F1GT from Next Level is a solid simulator.  It does most things right and doesn’t have any glaring issues.  If I had to give it a grade, it would be an 8/10, and we don’t exactly grade on a curve around here.

The $500 price places it in a good position.  Much south of that and the simulators get a bit “meh,” and north of that they quickly get to $1,000+ range for simulators that don’t really offer that much more (talking static only, not motion, whole other subject).

Also, the F1GT stacks up well against other simulators in the $500 price range, such as the GT Omega Racing Pro and Obutto Ozone.  I’ve had extensive experience with all three now – even owning an Ozone for 6 enjoyable years – and all three are pretty close to one another, with differing pros and cons here and there, but overall similar.

But what the GT Omega and Obutto don’t have is the F1 mode of the F1GT, and I think that’s the feature that puts it over the top for me, because I just find it to be really “cool.”