Welcome to our Logitech G29 review and comparison to the G27. For this review we tried it again on the PS4 as well as a ton of titles on the PC.

First we’re going to discuss general differences between the G27 and G29.

Overall the look of the wheel is a little more toy like compared to the g27 with the plastic bits, is has blue and black colored metal. We don’t think they succeeded in making it look more high end. 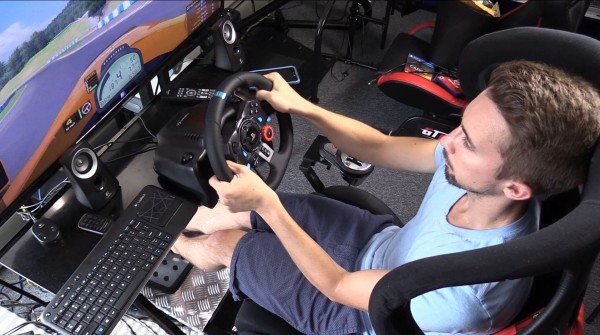 There’s now a brake modification on the G29 and we do like the brake a lot better and the progression that it has over the G27. The brake itself is harder to press at tip-in then hits the stop at halfway It’s soft to start and harder at the finish. The G27 does have mods available through aftermarket channels that makes it as good or better. But stock, there’s no progression

The driver profiler no longer has sliders to adjust Force Feedback, Spring, Dampening, etc.  We tried to load the older G27 driver and boot it as a PS3 wheel and it didn’t work. We tried to get the G27 adjustability in PS3 mode but it didn’t work.

The new Logitech Gaming software comes with an Assetto Corsa preset yet the drop and drag system doesn’t seem to work and or apply settings.

When we installed the G27 to compare, the Logitech support page says to use Logitech G software with the G27 and it’s not recognized in that software. It does load a driver though as you are able to run it with iRacing. But you lose all adjust-ability, even degrees of rotation and have to use the default 200. We went back and loaded the last Logitech driver which by the way, if you need it, we have it HERE in our forums to get that functionality back.

The G29 has a D Shaped rim and the G27 is round and they’re both the same diameter. They both have the same leather wrap as well as the same shifter / rev lights.

Here are the things that are identical on G27 and G29

We were hoping the resolution on the pedals would be higher on the G29. They offer the same 256 steps or 8 bit resolution that the G27 offers.

The G27 shifter worked with the G29 on both the PS4 and PC. However it did not work on the PS3.

Same hard mount spots on the wheel and pedals and we mounted it to the Next Level GT Ultimate racing chassis. 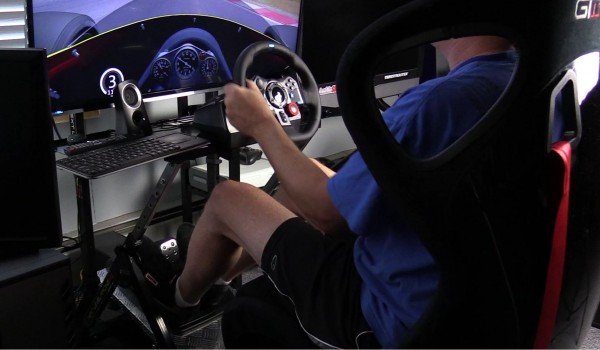 Now onto performance and how it compared to the G27. We used the iRacing Star Mazda at Okyama as our test bed. First we ran the G29 and set the force feedback as high as we could without it clipping too much. We tried linear and non linear and non linear seem to have a little more road feel.

After doing some reading, it seems non-linear is best for a wheel of this caliber. We suggest that you try both for extended periods of time, and see which one you like best. Since in neither situation you’ll get a real mapping with that wheel like you would with a direct drive wheel like the Accuforce, you have to tune it to your likeness.

It seems like the G29 is setup with the community settings out of the box by default which is a good thing since you can’t adjust it to your preference. 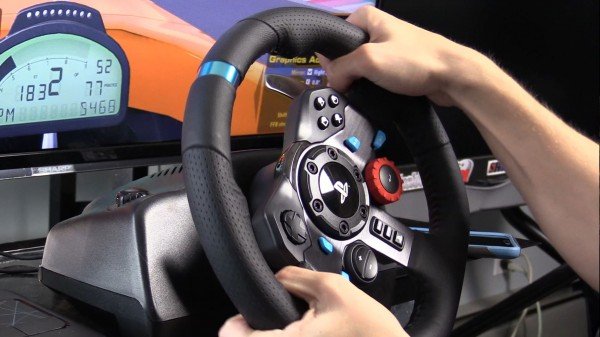 The shift lights on the G29 don’t work yet with iRacing but should in the next build coming soon. Matter of fact the shift lights only worked with Project Cars on the PC. On the PS4, all titles seems to light them up.

While on the subject of the PS4, we went back to F1 2015 and Project Cars and the brake issue with it being too sensitive still hasn’t been fixed for F12 2015. Matter of fact I think it’s worse now. There’s a work around though and you can map the clutch as the brake for now.

On Project Cars it worked fine once you dialed in all of the 50 FFB sliders. Default did feel pretty good though.

Someone asked us during our live show if The Crew was compatible on the PS4 and it’s not. We tried it and we couldn’t even get the game to launch..

On top of iRacing on the PC we also tried it with Assetto Corsa, Dirt Rally, F1 2015, and Project Cars

Assetto Corsa didn’t have a default G29 profile so we used G27 for base. We were able to tune out the wheel vibration at high speed but the clanking of the gears at onset of ABS is rough.

Dirt Rally we had to use “Direct Input” as there wasn’t a preset G29 profile either. The clutch was not supported as an axis. We maxed out all FFB sliders and it felt pretty good. We liked the resistance at 150% settings but the wheel chatters a lot. We then turned down some of the settings and it felt even better but still very loud and not smooth, harsh bangs on the cogs of the gears.

For F1 2015 it was nice having buttons to navigate this game specifically but  the Dpad is sloppy. Inputing a different direction than what we were pressing some times . Default G29 setup causes brakes to lock up even though it was mapped properly. Went into “custom” mode, remapped and worked fine. We got wheel dialed in and overall wasn’t bad and had strong enough ffb. Again, rattle city, this time when going over rumble strips. Rumble good, rattle bad. It also had a wide FFB dead zone.

Project Cars – Shift Lights worked.. Default felt pretty good. It felt better on the PC versus the PS4. PS4 felt like there was some input lag but that has nothing to do with the wheel. After messing with some of the many settings, we got it to feel better.

Compatible with PS3, PS4 and PC
New Brake Mod
Shifter paddles feel better, shorter throw too
Built by Logitech, should be durable
More buttons and a dial on wheel nowSame hardmount points as G27
Nice clamp if you don’t use hardmounts

Cons:
Price for entire package with shifter $460 – $300 would have been more reasonable
Small diameter wheel that’s not replaceable without modding
Force Feedback deadzone that the G27 had
Gear drive noise / chatter
Not much of an upgrade on a G27 except for the PS4 compatibility
Shifter sold separately
Buttons and wheel are toy like compared to competition and even the G27

So there’s our Pros and Cons, nwo on to our final thoughts

John: Overall – feels like a g27. Maybe a bit smoother but may be placebo effect. Still very much feels the gears, making it archaic feeling compared to other modern wheels.

Darin: The community in general seems pretty upset with the direction Logitech went with the G29. Not sure why they didn’t work with the developers to make the G27 and DFGT compatible with titles on the PS4 like Thrustmaster and Fanatec did. Sure some of the wheels don’t work in the PS4 menus and they don’t have a share button, but the wheels work in game which is the most important aspect.

I would recommend the G27 if you are running on the PC only and even the PS3. If you want PS4 compatibility and are partial to the Logitech style of wheel, then you should consider the G29. Another thing is that if you’ve modded your G27 pedals, you can use them on the G29. Same plug and the pedals work on both bases.

I was hoping for more with the G29 to be honest. I imagined a big step forward in technology considering what the competition has done. Maybe they’re working on a G31 and it will be some belt driven or direct drive beast.. But I doubt it.. It’s definitely a good wheel and Logitech makes gear that usually lasts a long time and is durable.

Currently it’s going for $399 but I’m sure that will drop. The G27 was originally more money and it came down to under $300.

Stay tuned for our full comparison of the G29 against the T300. We hope you enjoyed this review !