Admittedly, we do review a fair amount of products that are out of the price range of your average sim racer.  But today is not that case, as we review the $99.99 PS4, PS3, PC compatible HORI Racing Wheel Apex.

For those of you who have never heard of HORI – myself included before they reached out to us to review the wheel – the company has been around for nearly 50 years and in the gaming industry since 1983.  A dozen years ago, the company expanded from its home Japanese market into a global maker of gaming peripherals, including racing wheels. 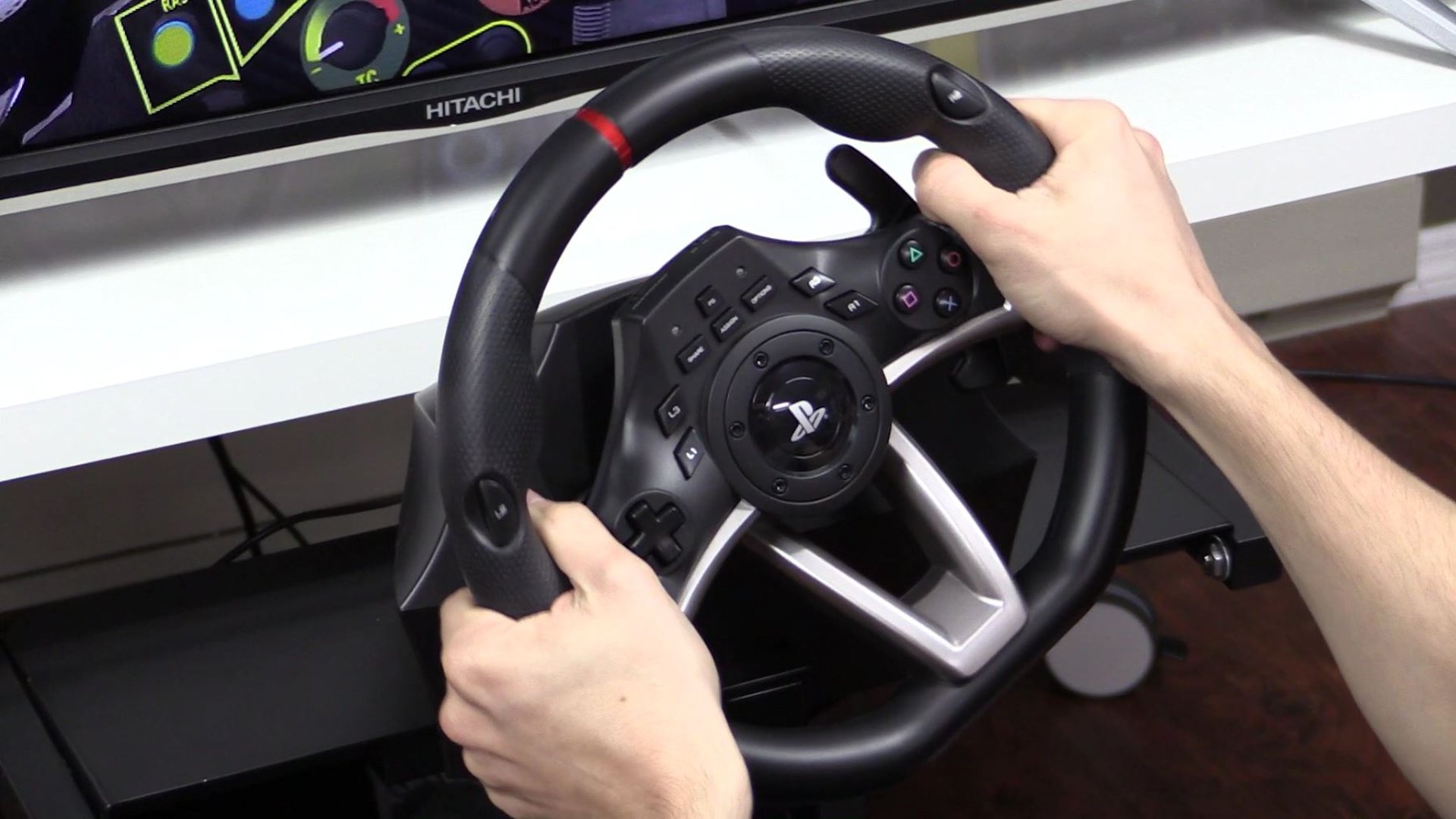 The Racing Wheel Apex is their latest effort and looks to dispose the memory of past HORI wheels, wheels that left some of you with choice words…

Wheels have three opportunities to make a good first impression, when you unbox them, when you rotate them for the first time and when you drive them for the first time, and the Racing Wheel Apex did pretty well at the unboxing part.  The plastics and rubber are pretty good for the price point, and the design is sporty with a classy 3-spoke design and flat bottom rim.  The buttons are literally the same as the PS4 controller’s, or of the same feeling quality, which again, is a plus for the price point.  It also doesn’t hurt that there’s plenty of them. 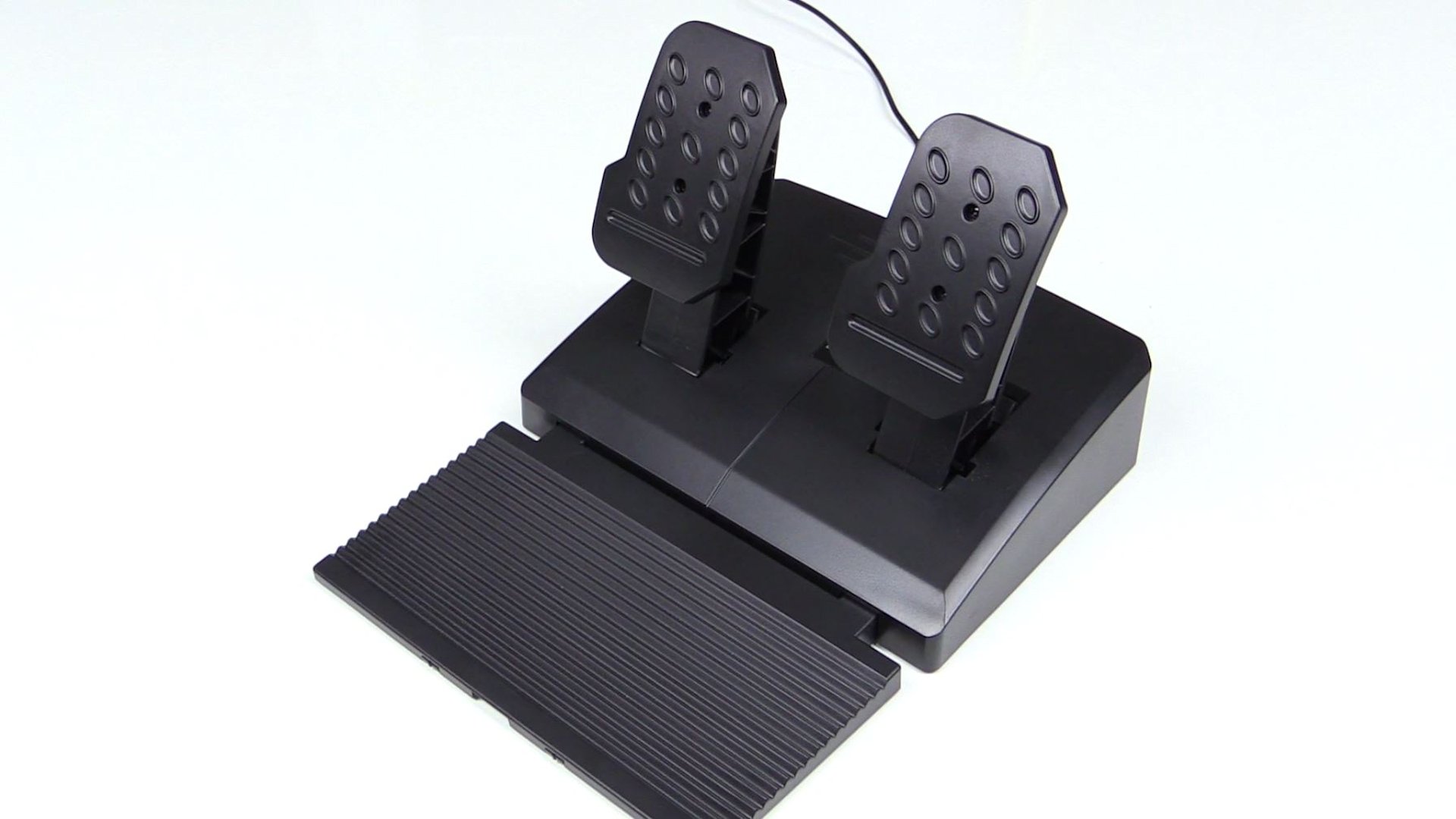 As for the pedals….they’re black?  Like most entry level wheel and pedal sets, the development effort clearly went into the wheel and the pedals were designed over someone’s lunch break.  But that designer must have been watching Transformers during his lunch break because the pedals also transform, from a rinky-dink tiny set of pedals into a less rinky-dink set of pedals thanks to a thin plastic flap that serves no purpose whatsoever.

Things start to go a little sideways though when you turn the wheel for the first time.  The eagerness for the Racing Wheel Apex’s rim to return to center screams bungee system and not a force feedback motor like we’ve come to expect in the sim racing market.  The back of the wheel only further confirms this with a single connection for the pedals, USB, and no power cord.

The wheel comes with two mounting options, suction cups or a more traditional wheel clamp.  First I tried the suction cups but I literally couldn’t get them on.  That activated Plan B, just using the traditional table clamp.  It’s a little flimsy feeling and it didn’t give me the confidence to really torque it down but it seemed to do the trick.

As for the pedals, mounting was a breeze, using HORI’s super quick, “toss it on the floor and pray that they don’t move” system. 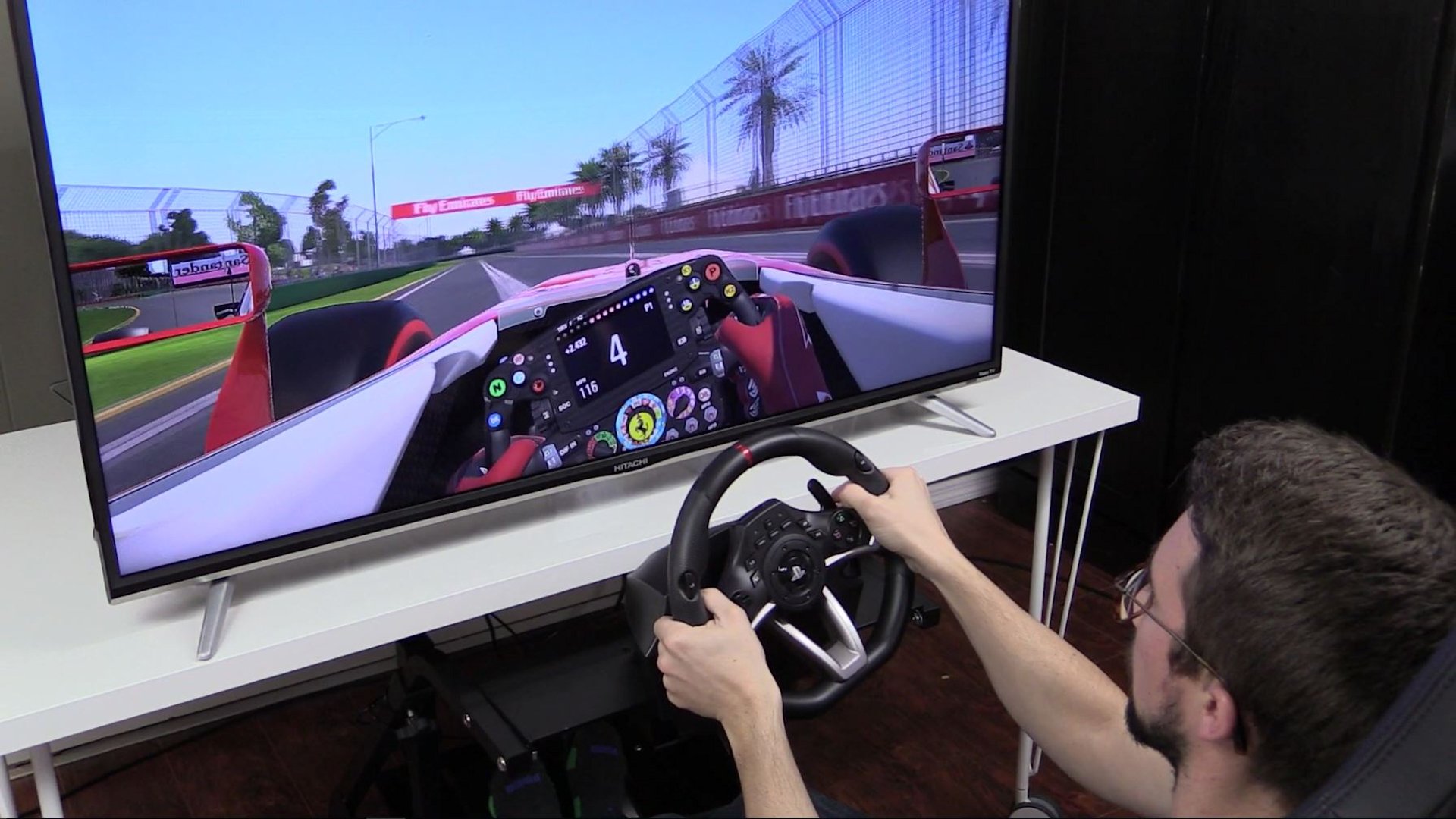 But then I drove it…AND IT WAS TIME TO PANIC!!!

I could measure the deadzone with a yardstick.  It was nearly impossible to keep the car on track in F1 2016 on the PS4.  But as I sat there trying to think up of colorful ways to make fun of the wheel, another thought popped into my mind.  “It can’t be THIS bad.”

Surprisingly, the $99 HORI Racing Wheel Apex comes with a laundry list of settings.  Console modes, navigation modes, degrees of rotation settings, deadzone settings, sensitivity settings and – some – mappable buttons.  My print off of the manual looked more like an engineering text book than instructions for a video game racing wheel.

After a lot of reading, I realized where I made my first mistake, picking the PS4-N or ‘Normal’ mode.

With a bungee system, there’s no building of resistance as you turn the wheel further, or feel of lightness when the back-end breaks loose.  The wheel is just kind of floating out there, disconnected from the car, and it’s up to you to rely on your eyes and ears to keep the car under you.

The wheel does have – quote, unquote – “multi-level vibration feedback,” but I could never differentiate the vibrations, it was just a constant low-level buzzing letting you know the wheel was alive. 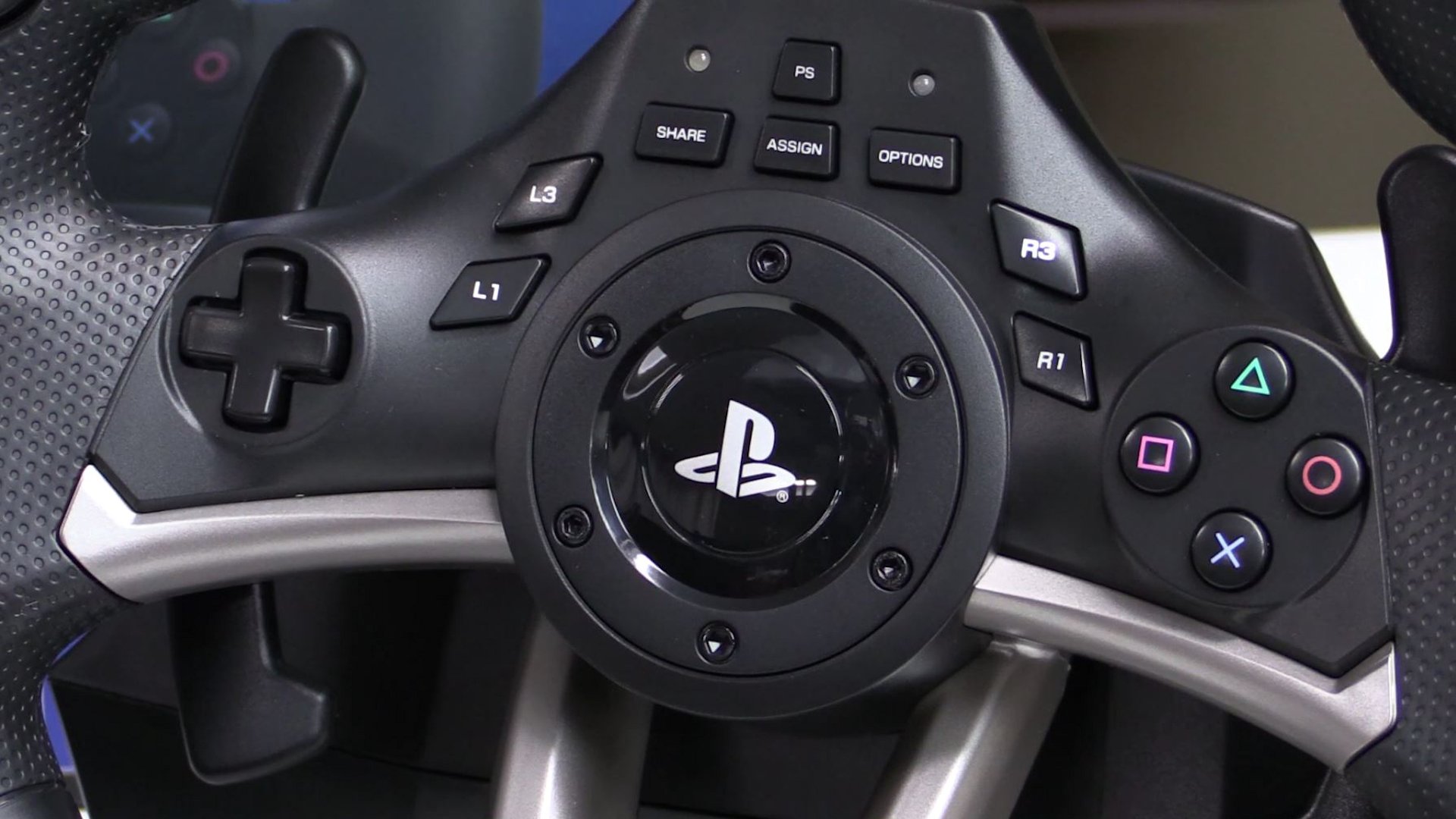 If you can adapt to it, or for lack of a better word, put up with the lack of feel, the rest of the wheel experience isn’t too shabby.

The 28 cm wheel feels smaller than other 28 cm wheels out there – for some reason – but is still big enough to get the job done.  It’s max 270 degrees of rotation is also more passable than you would expect, not making me miss the 540 degrees that I usually run at.

You can turn down degrees of rotation to 180, but that was clearly jumping the shark, making the car very hard to control.

The buttons you need to get to are in reach, and I love the big rim mounted L2/R2 buttons that come in handy for things like DRS. 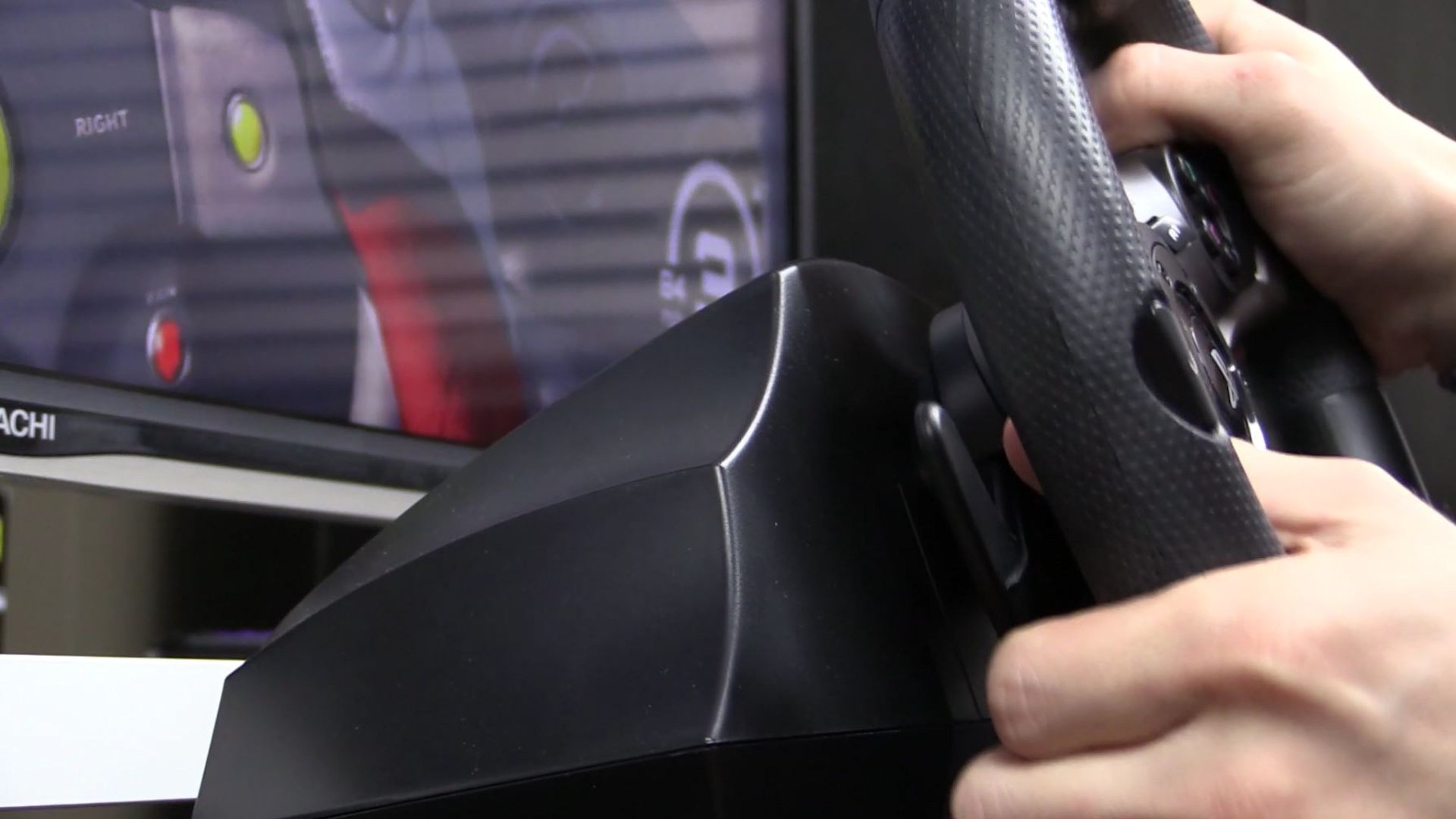 The wheel mounted paddle shifters feel a little flimsy but I rarely missed a shift and they have a positive click.  With that said, they are mounted close to the rim, resulting in my hands feeling cramped at times and brushing against them.

And how does the kind of flimsy table mount perform?  Okay.  For the most part it did the job but after some heavy thrashing, I would need to snug it back up to the table again.

Like the wheel, the pedals require just as much, or more, muscle memory.  They have okay resistance for the price point, but considering the pedals aren’t sliding out from under me, they clearly don’t require much force.

While you can practice and figure out how much travel is needed to hit your braking marks, this gets a little tougher in the heat of the moment when you’re off the usual racing line, and could really use some feedback to make split-second adjustments.

As I mentioned earlier, the Racing Wheel Apex has a lot of adjustability via the settings but for F1 2016, I didn’t find any combinations that worked better than the base PS4-S settings.  But Assetto Corsa on the PS4 was a different story.

Apparently, Assetto Corsa isn’t a “Steering Mode” compatible title, which means I had to run the wheel in PS4-N mode.  Oddly, I also had to have the in-game controls set to the PS4 controller, preset 2, with the wheel not working when set to the two wheel mappings.  This combo of wheel and in-game settings allowed me to drive the car but it duplicated button functions, giving me other methods to push the gas, brake and shift, instead of toggling my HUD or adjusting my camera.

This was both confusing and annoying, and the ability to program buttons was no use because that requires you to have those settings you want to map already available on the wheel.

In terms of the driving, PS4-N mode was just as terrible in Assetto Corsa as it was in F1 2016 out of the box, but now I knew how to make adjustments. 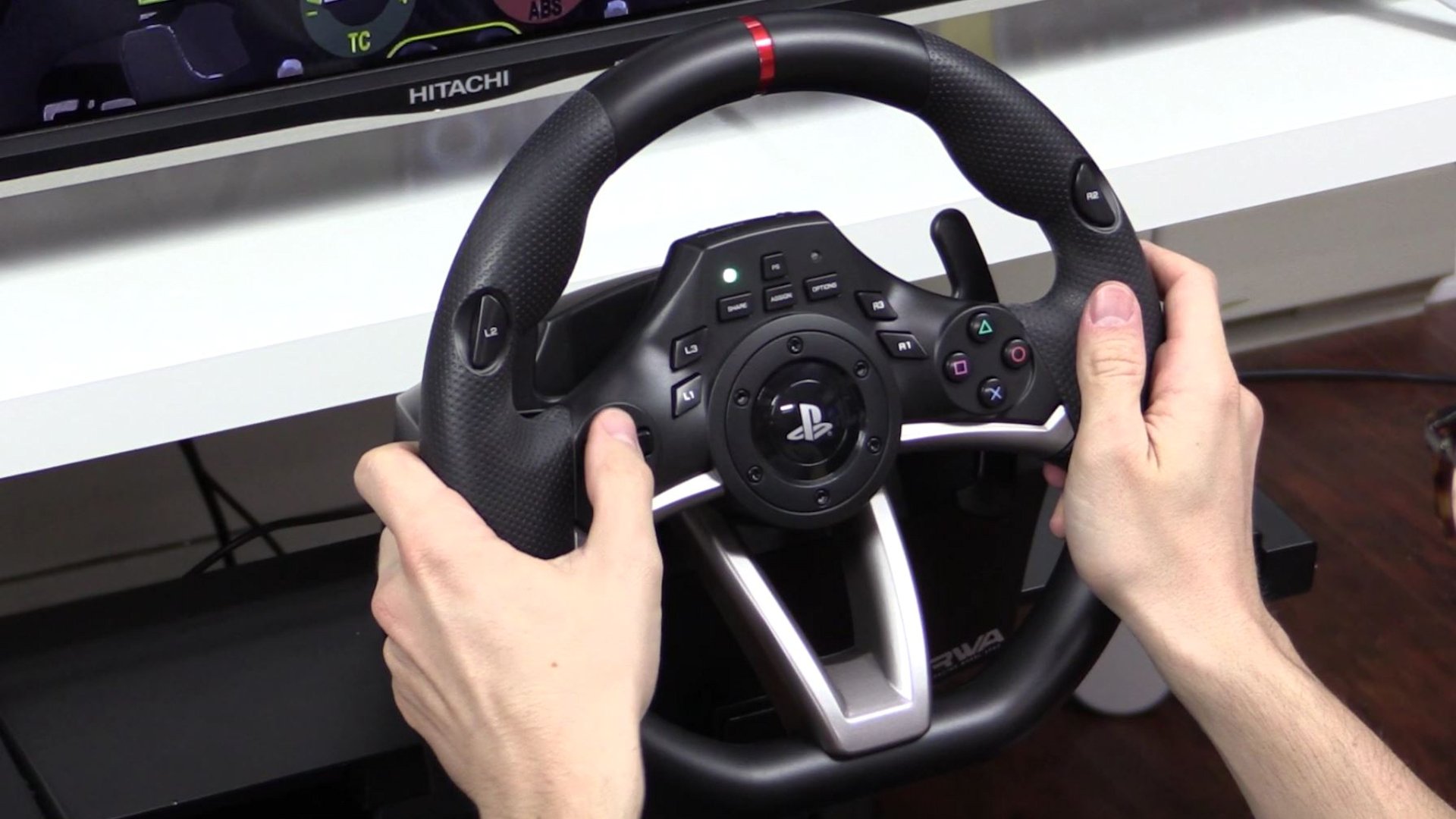 The adjustments are made via a combo of button presses and begin with holding the “Assign” button at the top of the wheel.  Settings such as deadzone and sensitivity have seven different settings indicated by the color of the ‘programming LED’s’, with green, yellow, red, purple, blue, light blue and white going from less responsive to most.

As for the pedals, I kept the sensitivity at the middle – purple – setting since I was having a hard time differentiating any difference between the seven settings.

Like F1 2016, once dialed in, I was able to drive competitively in Assetto Corsa.

But all this messing around with PS4 modes and settings does make you ask, “why?”  It’s one thing if all the settings were driveable, but most aren’t and this is a lot of tinkering around for an entry level wheel for novice sim racers.  Think HORI could save a lot of headaches and bad first impressions by just setting it up right from the factory and leaving it.

I don’t think the Racing Wheel Apex is a bad effort from HORI.  At the $99 price point, the biggest thing you are trying to accomplish is to give the user a better, faster, experience than the controller.

I could certainly turn faster lap times with the Racing Wheel Apex, than the PS4 controller, which almost in itself justifies its existence and price point.

But can it take on higher priced wheels?  No.

While the Racing Wheel Apex is quicker than a controller – for most people, always going to be a few alien controller players out there – I’m going to probably be quicker, and definitely more consistent, with a force feedback wheel such as the Thrustmaster T150 or Logitech G29.  You just can’t beat having that real time response to your inputs.

But again, as a low barrier to entry into the sim racing genre, I think the HORI Racing Wheel for the PS4, PS3 and PC deserves a look.