Over a year ago we reviewed the Fanatec ClubSport Pedals V3, and were not only impressed by the pedals, but the difference a little red and green cylinder made to the feel of the pedals.  Those cylinders were the pre-production version of what would become the Brake Performance Kit, a $29.95 / 29.95€ upgrade to the ClubSport Pedals V3, that now – finally – are available to the public and ready for us to officially review.

The ClubSport Pedals V3 Brake Performance Kit – say that three times fast – comes in a very nice and tidy little box, with all the pieces clearly labeled and easy to follow instructions.  The kit arrives with three red and three green Eladur – Eladur being the name of the elastomer material – “springs”, one polyurethane foam (PU) spring and a tube of lithium grease.  Of the six red and green Eladur springs, four are 13 mm in diameter and the other two are 12 mm in diameter.

The goal of the Brake Performance Kit is to increase the brake pressure, while reducing the brake pedal travel.  The reason for this – as explained on Fanatec’s website – is because the body memorizes muscle tension better than position.

So in theory, the Brake Performance Kit should – at the very least – make your braking more consistent, and at best, improve your threshold braking, maximizing the stopping power of the brakes, while not overstepping and locking up the tires.

Now usually, this is where we say something witty to that claim like, “we shall see!”  But this isn’t the case this time, because we already had this kit for a year, at least in pre-production form, and like it.

So if we already like the kit, isn’t that the end of the review?  Not exactly.

While we do like the kit, I’m not in love with my current setup.  My V3’s contain a single – long – green Eladur spring.  While I prefer having it versus not having it, it has made my brake pedal very stiff and resulted in next to no travel. 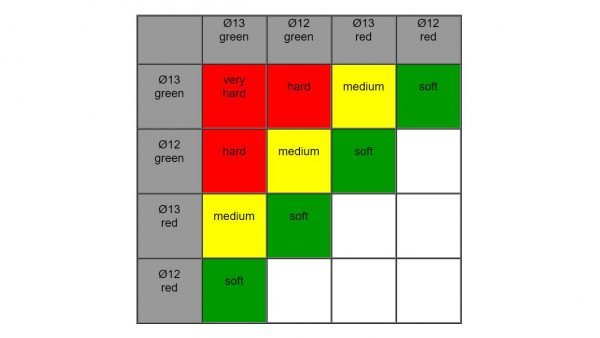 Essentially, my current setup is the equal to two 13 mm green springs from the kit that Fanatec label as “very hard”.

While I prefer a stiffer brake, I also prefer more travel, which has resulted in me running the Fanatec CSL Elite Pedals LC instead of the V3’s due – partially – to the greater brake travel.

So I want to see if the different options of the Performance Brake Kit can increase brake travel, without sacrificing brake pressure, and bring me back to the V3’s.

The other question I want to answer – especially since a lot of you have asked –  is if the add-on Damper Kit is necessary if you purchase the Brake Performance Kit?

We’ll first test different combos of springs, then place the damper kit on our favorite spring combo and see if it improves the experience.

So with that said, let’s get to testing!

First up was carefully removing the Damper Kit from the brake pedal, unhooking the brake cylinder, removing the old single green spring – with no PU foam by the way – and replacing it per the instructions with the PU foam this time and two – lubricated – 13 mm diameter red springs.

The goal of this first test was to see what the brake is like at “soft” settings, or at least we assume soft settings since someone didn’t look at the table before tearing everything apart….

Before we get to how this “soft” setup performed, I do want to note one thing.  The green single spring that’s been in my V3’s for over a year came out quite dirty and with some metal shavings on the bottom.  I didn’t worry about it too much at the time but we’ll return to this topic in a minute. 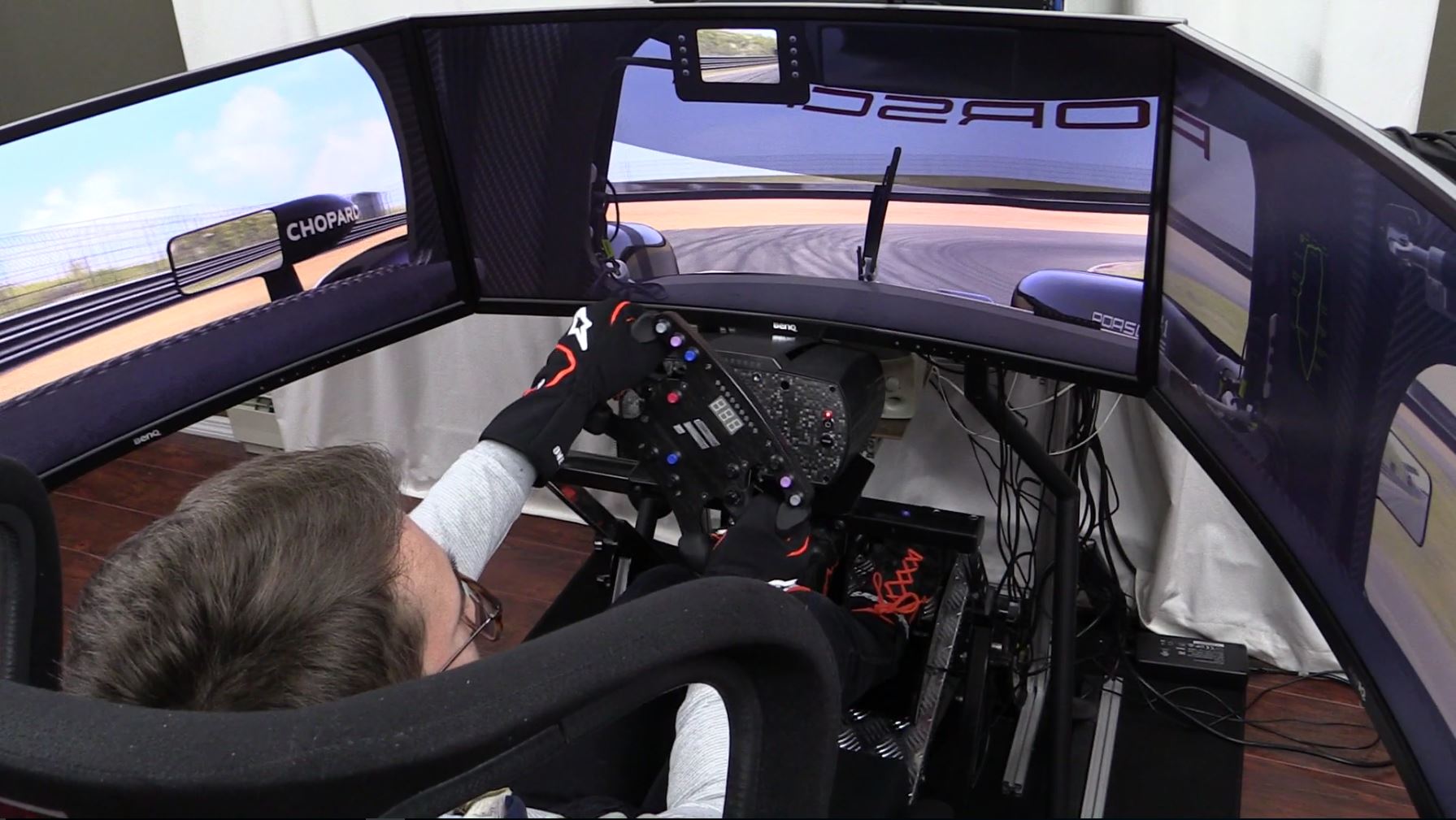 Once buttoned up and mounted back on my Next Level V3 Motion chassis, I took to Zandvoort in both iRacing and Assetto Corsa since the track has a lot of low, medium and high speed braking zones for such a short lap.

I used these combos for all variations of the brake kit that were tested.  I also set the brake resistance in the Fanatec Control Panel to 75% for all tests to remove any variables on the software side.

The two red springs had their pros and cons.  The pro was now having some actual travel in the brake.  The con was the pressure not quite being where I liked it.  Also, I was feeling inconsistency in the brake pedal that was causing me to lock up.  It was like the the resistance would fluctuate through the throw, and is something I’ve felt before, and not cared for in my V3’s.

Now, do want to stress that these are very small fluctuations, and far from a deal breaker,  but when threshold braking, little things add up.

Also want to note that there’s a third element that affects the brake feel.  We already touched on the brake resistance set in the Fanatec Control Panel and the springs you select of course, but lastly you have the brake pre-load screw. 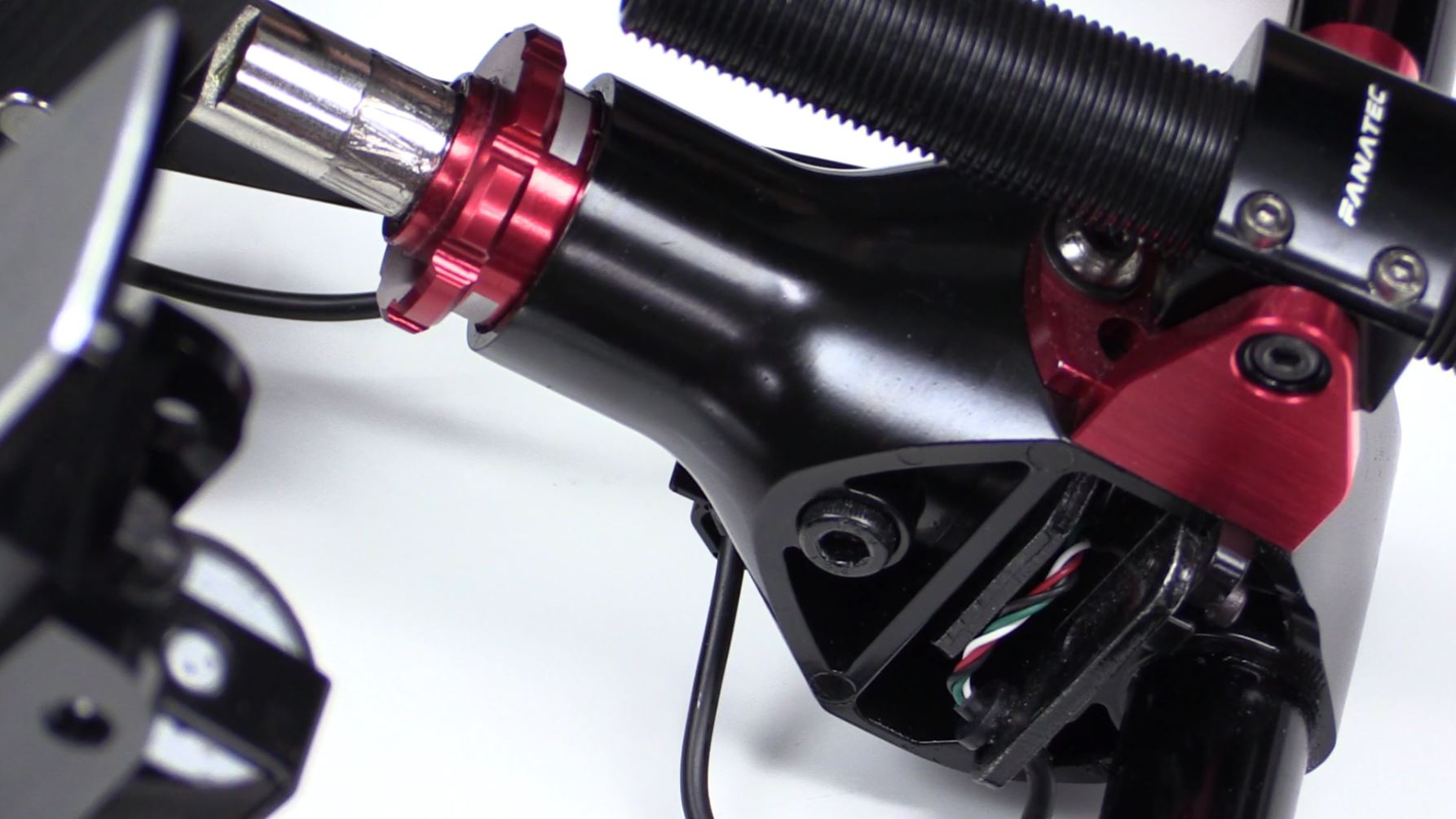 The pre-load screw is the the only way to adjust the brake pedal stiffness and travel on the base V3 pedals.  On the base set it can be adjusted between 0-5, 5 being the stiffest.  Once you install the Brake Performance Kit though, you can’t set it at 5 or even 4 or even 3 anymore.  The best you can do before it really gets tight is around 2, maybe 2.5.

And while the max value has decreased, it still makes a difference where you set it at.

This resulted in me not only changing out the springs but trying the springs at both level 1 and 2 on the pre-load screw to determine the best feel.

Moving on to the next test, which swaps out the bottom 13 mm diameter red spring for the stiffer 13 mm diameter green spring.  The pairing of the 13 mm green and red spring should result in  “medium” pedal pressure according to the Hardness Comparison table. 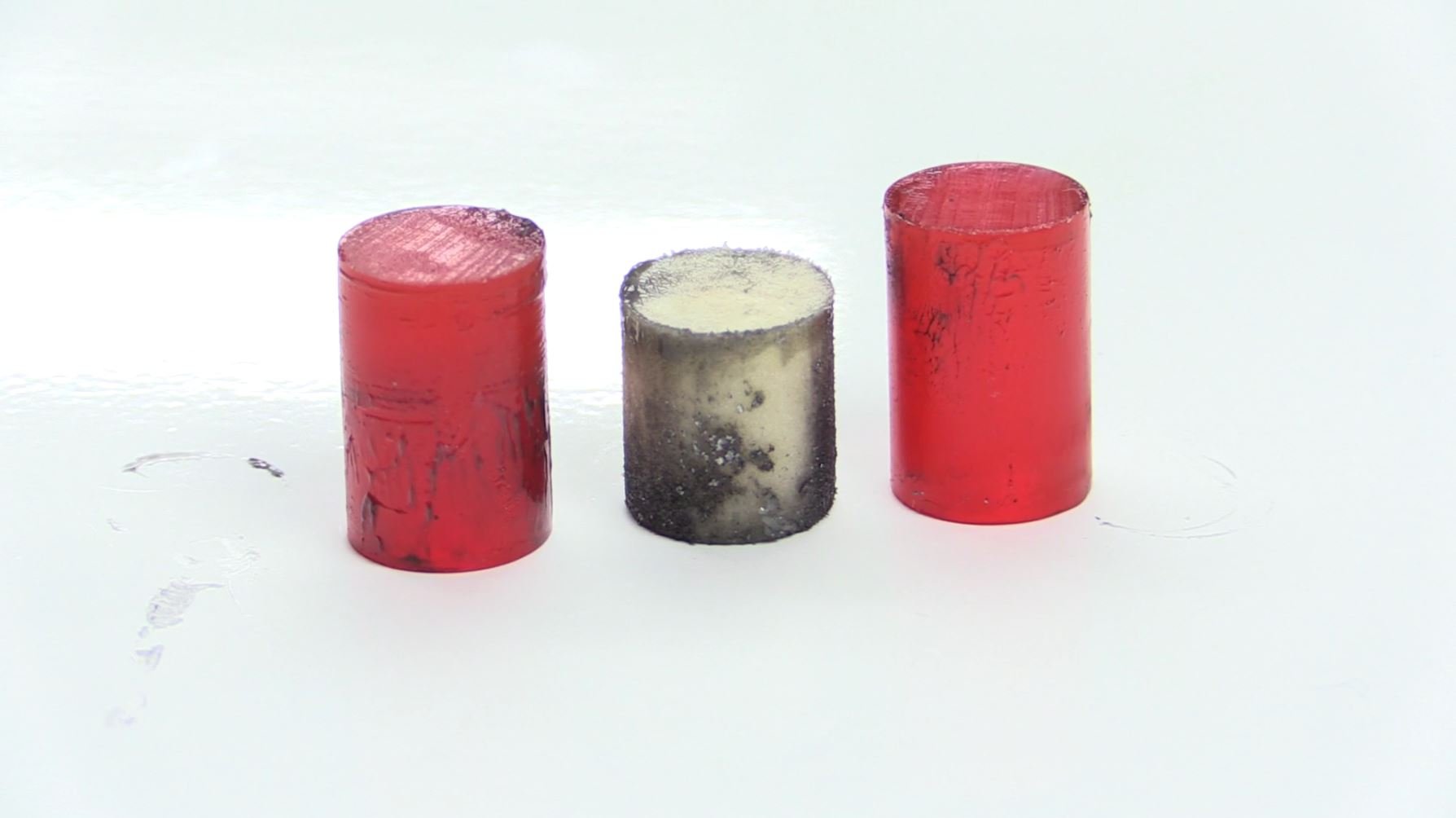 But before we get to those results, have to talk about what I noticed when I pulled the previous soft setup out.  When I removed those springs, not only were they dirty but there was a good amount of metal shavings on them.  I’m not sure where the shavings were from, but clearly it’s not a good thing.

So I cleaned the shavings off of the PU foam, then applied a liberal amount of lithium grease to the springs just to be safe, and placed them in the brake cylinder.

Was there now a noticeable difference?  Yes, on multiple levels. 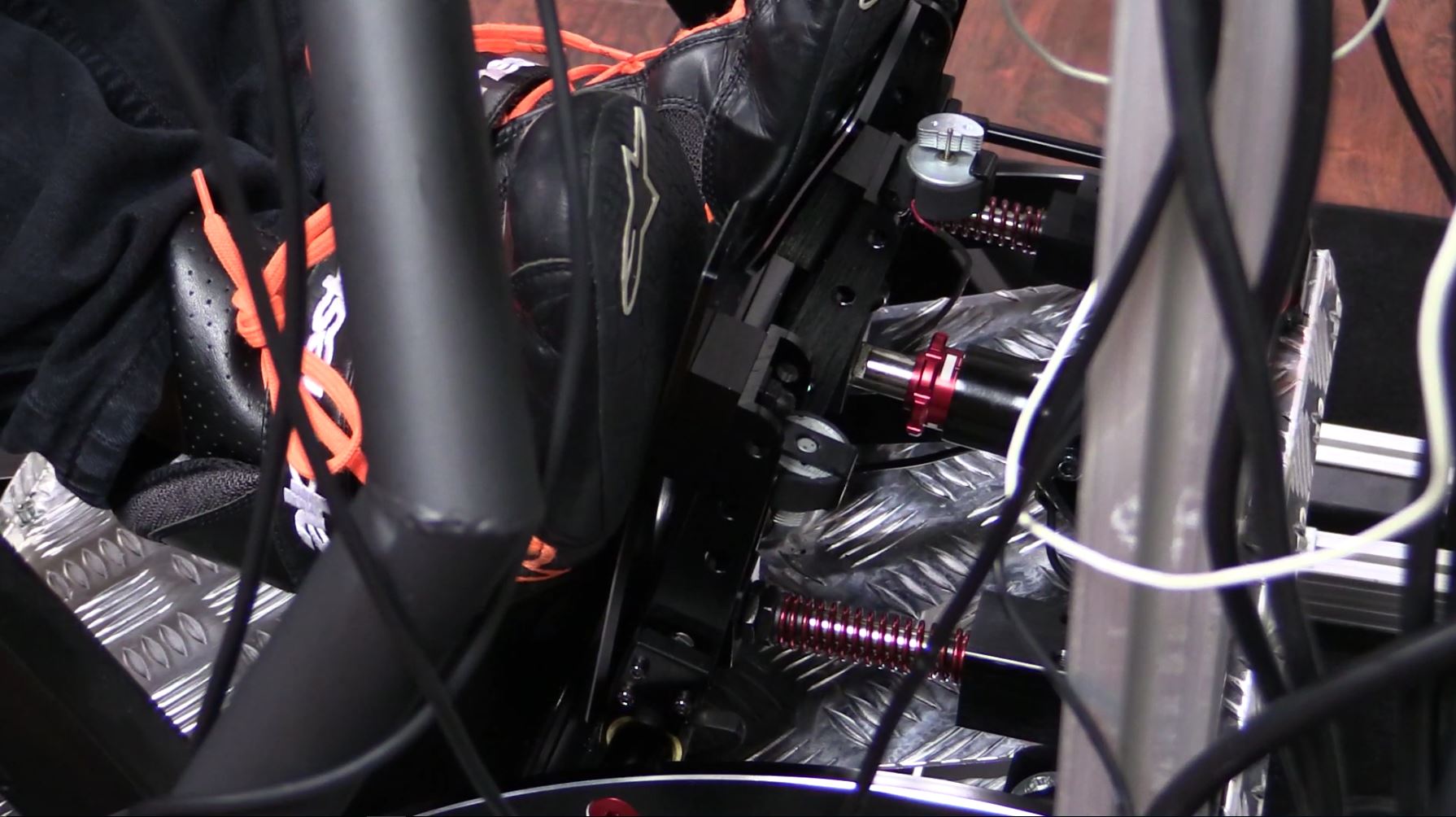 First off, the brake pressure felt good and more were I wanted it.  Also, while the brake throw had decreased some – as it does when you up the pressure – there was still enough there, at least when I had the pre-load screw at level 1.  When I moved it to level 2, it shortened the throw too much and I was locking up trying to find the sweet spot.

But at level 1, I felt in control.

And how about that inconsistency through the brake throw that I was feeling earlier?

Have to imagine that it was due to the metal shavings in the brake, and cleaning that up and using plenty of grease fixed the issue.

Last but not least was trying out two 13 mm diameter green springs for the “very hard” setup.  This is the same setup that’s been in my pedals for the past year, but this time I used the PU foam as well to see if there was a difference.

There was no difference.

To no surprise, the pedal was now very hard and had very little travel, two things I don’t care for that much.

So call me Goldilocks because the medium combo of green and red was just right for me.

And yes, I know I skipped the “hard” setup but considering how going from level 1 to 2 on the pre-load screw at medium was too much of a jump, I doubt I would had liked that better. 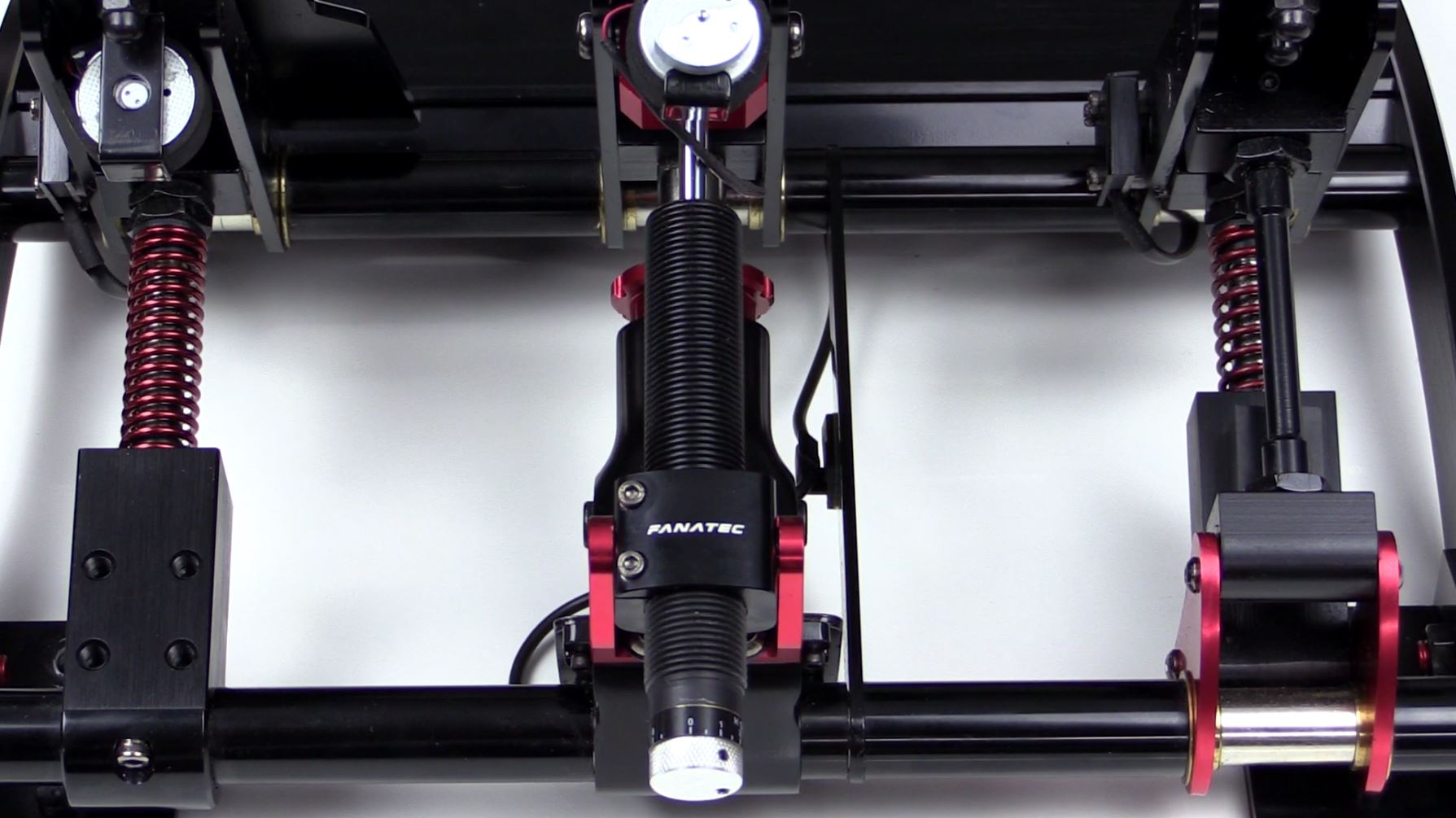 Now that I dialed in the ClubSport Pedals V3 brake settings to 75% in the Fanatec Control Panel, 13 mm diameter red, green and PU foam inside the brake, and level 1 on the pre-load screw, it was now time to see if the damper kit made a positive improvement.

The Brake Pedal Kit makes the Damper Kit redundant.  The only way for the damper to work is to add resistance by reducing travel and I’m already at a happy medium that I like.

Save your money and just pick up the Brake Pedal Kit.

Lastly, does my new found brake setup convince me to remove the CSL Elites and place the ClubSport Pedals V3 back on my rig? 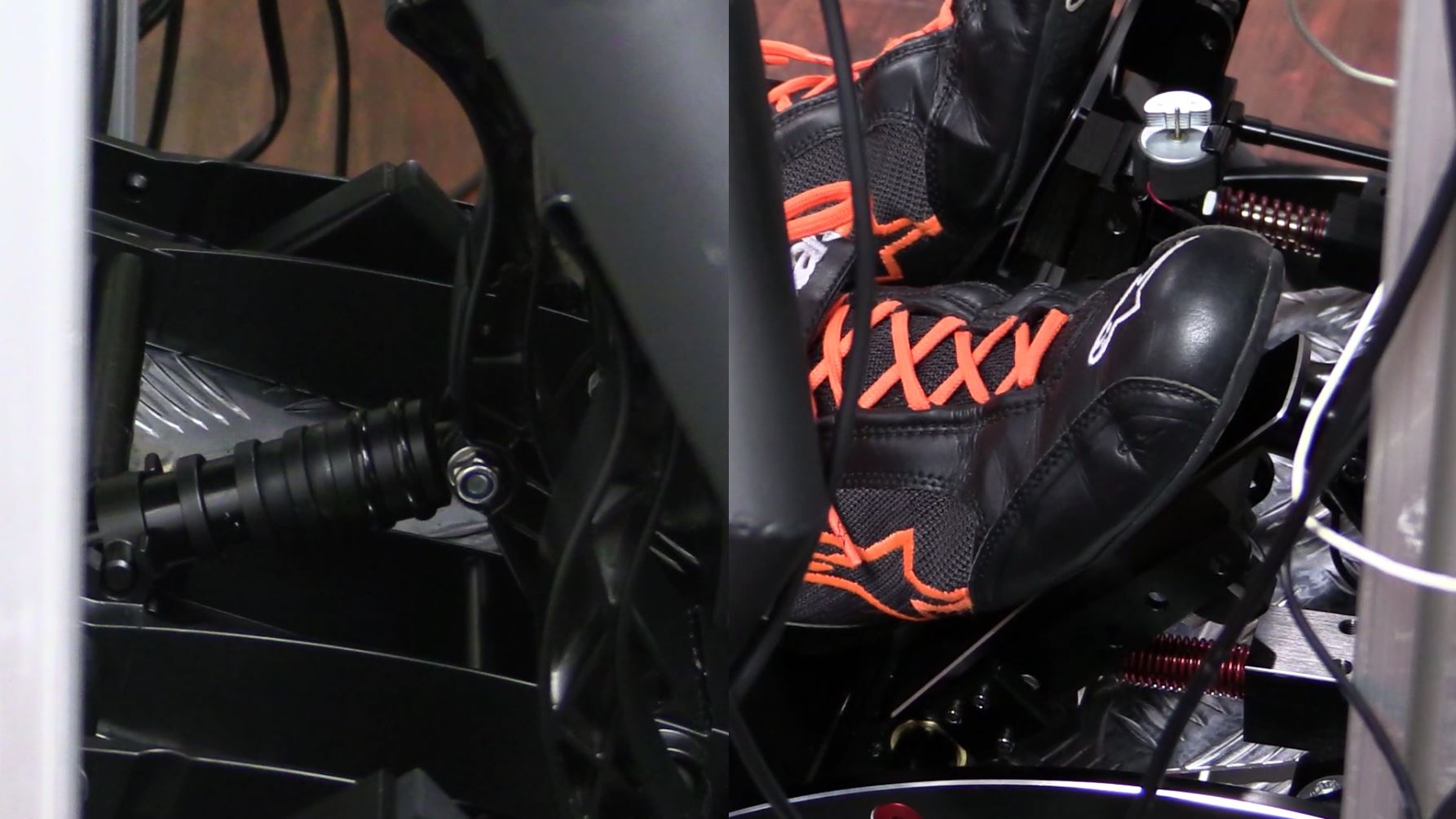 Honestly, I’m happy with both brake pedals now, even though they differ.  I still enjoy the travel of the CSL Elite’s pedal.  I’m also liking the Formula 1 feeling ability to mash on the V3 pedal now, despite having less travel.  It really is a toss up for me, and I think I’d be happy using either set.

In terms of you the consumer making a decision, at the very least you should know that you can’t go wrong with either, and you should base your decision on what features in a pedal are important to you.

But if you do go ahead and purchase the ClubSport Pedals V3, you must spend the extra $30 and get the Brake Performance Kit.  Yes I know it’s more money and maybe the kit could had been included from the start, but that’s water under the bridge and $30 is nothing for the amount of performance it adds to an already good, and well priced, set of pedals.