Welcome to our review and benchmark of the EVGA GTX 970 FTW+ graphics card.  While there are plenty of graphic card reviews out there on the interwebs, none of them focus on sim racing…and we don’t like that very much here at Inside Sim Racing.  So we reached out to EVGA and they graciously sent us their GTX 970 FTW+ to not only be part of The Bat build but to review, and that’s exactly what we are going to do.

And by power them we mean run them at higher graphical settings while maintaining good frame rates, because having a fancy monitor that you can’t take advantage of is like building a McLaren F1 car and putting a Honda power plant in it.  F1 burn! *high five*

But before we get to the results, let’s talk about the EVGA GTX 970 FTW+ stats.  It features:

Now that you’ve been privy to the card, let’s talk about the computer it’s going into.  We tested the card on John’s personal computer, which isn’t exactly a spring chicken.  It was built in 2011 and much of the original hardware is present.  This includes:

This older setup will have some effect on the benchmarks but not a major one.  While the 2600k is old, it was extremely popular for a reason.  CPU’s since it haven’t made the kind of strides that GPU’s have.

With that said, the age of the CPU will show up more on DX9 titles than the “more optimized for GPU” DX11 titles.  If we had to guess, we would say the max loss of frame rates we encountered was 8 fps max on DX9 titles, which usually would be a lot, but isn’t quite as bad when you see what fps we were shooting for.

Same goes for the motherboard.  It only accepts DDR3 memory and PCI 2.0×16, while modern boards accept DDR4 and have PCI 3.0.  But these upgrades have an even smaller effect on frame rates, maybe 3 fps, in some titles.

So there’s the caveats of the test, which may not be if you’re still running an old system or maybe it gives you hope for slightly higher fps if you have a newer one.

Now that that’s out of the way, let’s talk about the benchmarks.

We tested in alphabetical order – and lucky enough – the first three titles on our list – Assetto Corsa, DiRT Rally and F1 2015 – are the only ones that come with a built in benchmark.  This made testing very easy since we had a repeatable process. 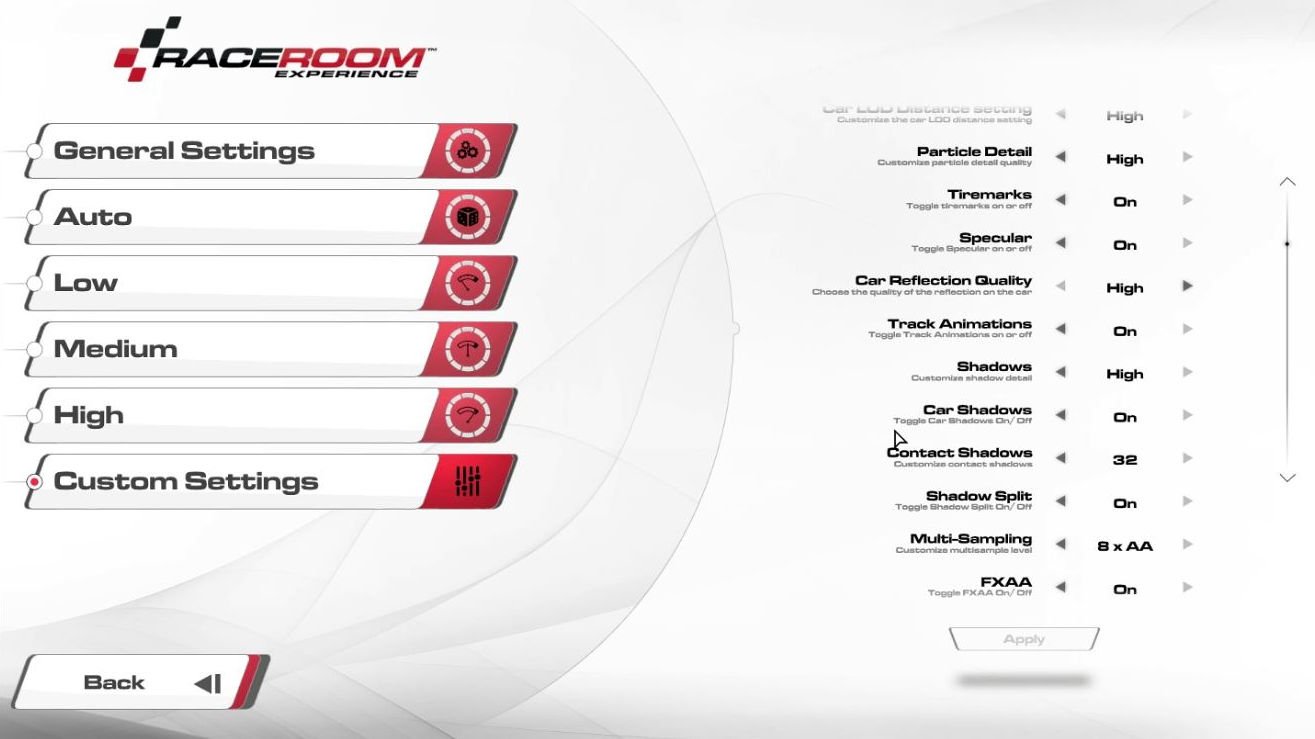 The next five titles on the other hand weren’t as easy.  With no built in benchmark, it required us to recreate the same scenario at each monitor resolution.  Not only did we do this, we also tried to run in light and heavy traffic to get an idea of what effect that had and to come up with the most accurate frame rate.

While this process isn’t as accurate as the in-game benchmark, it should be close enough to give you a good sense of what the GTX 970 FTW+ can muster in your favorite title.

We ran all titles at the highest settings we could without causing significant frame rate drops.  These settings will be noted on each benchmark.

Another thing we checked out was whether or not the title ran better with the Nvidia Control Panel anisotropic and antialiasing settings or with the in-game settings.  The rest of the control panel’s settings were left on default due to the sheer number of settings it has.

That information, along with whether the title is DX9 or DX11 compatible, is designated on the benchmark as well.

Now with the rest of that out of the way, let’s see how each title performed. 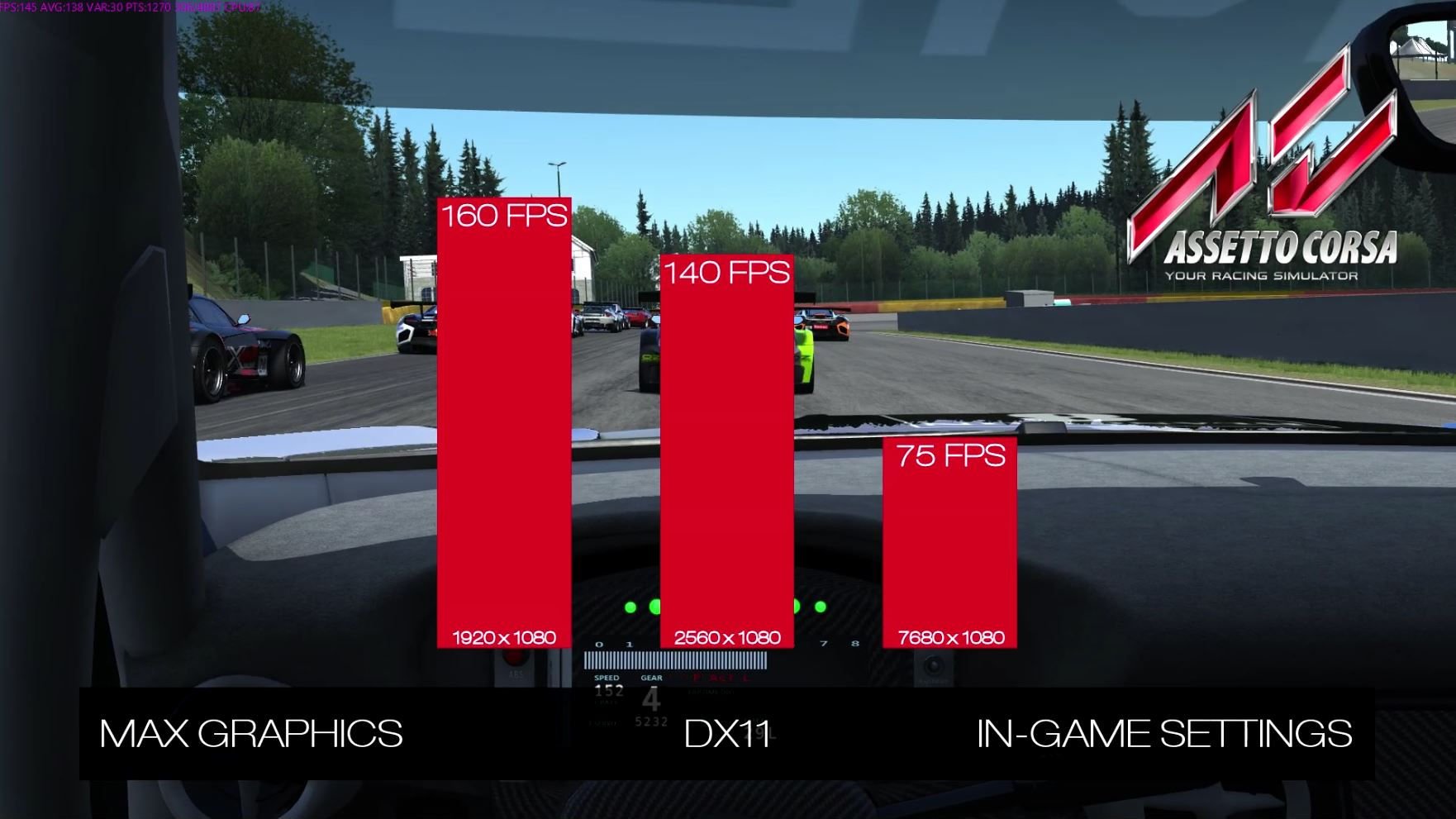 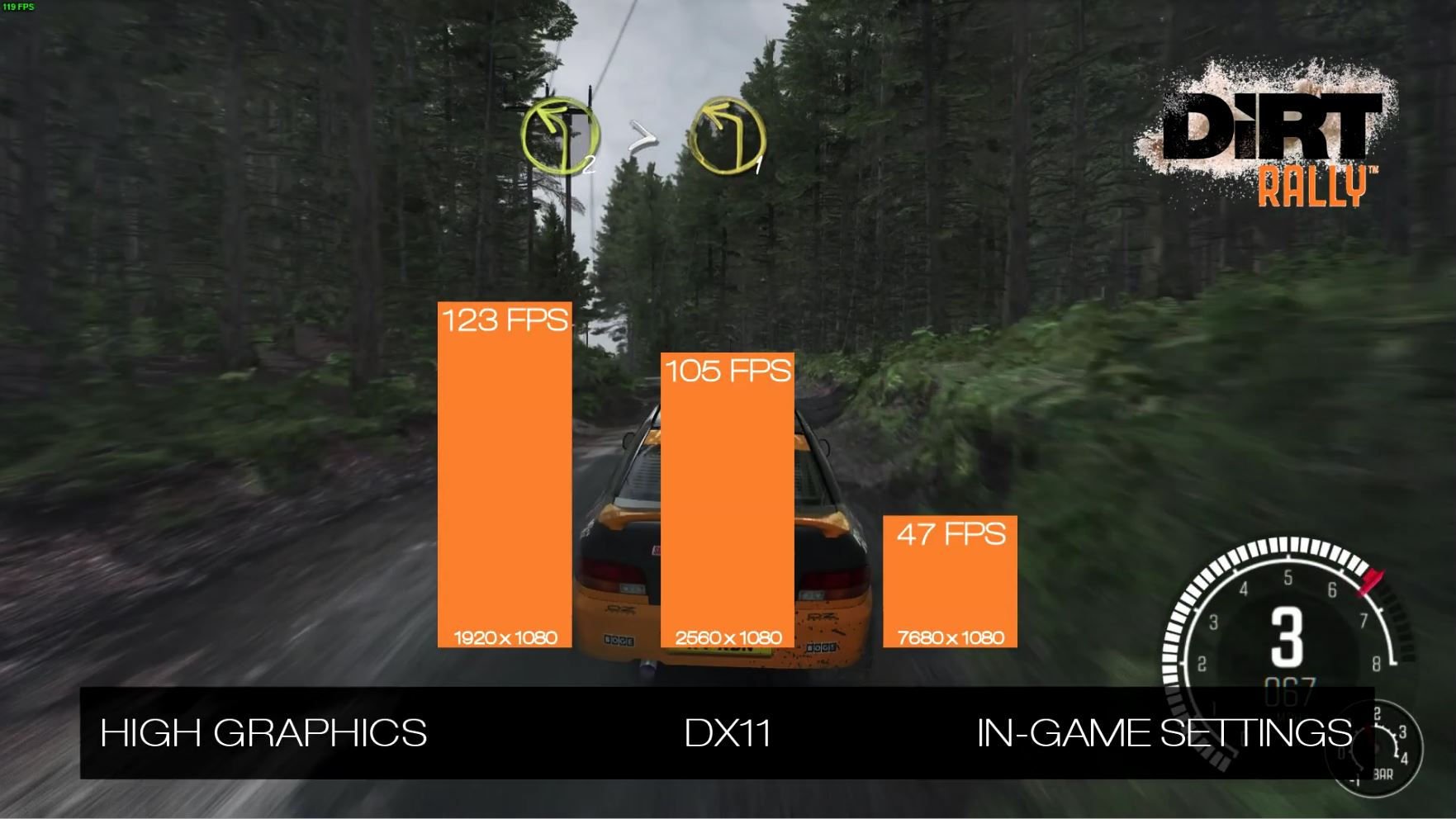 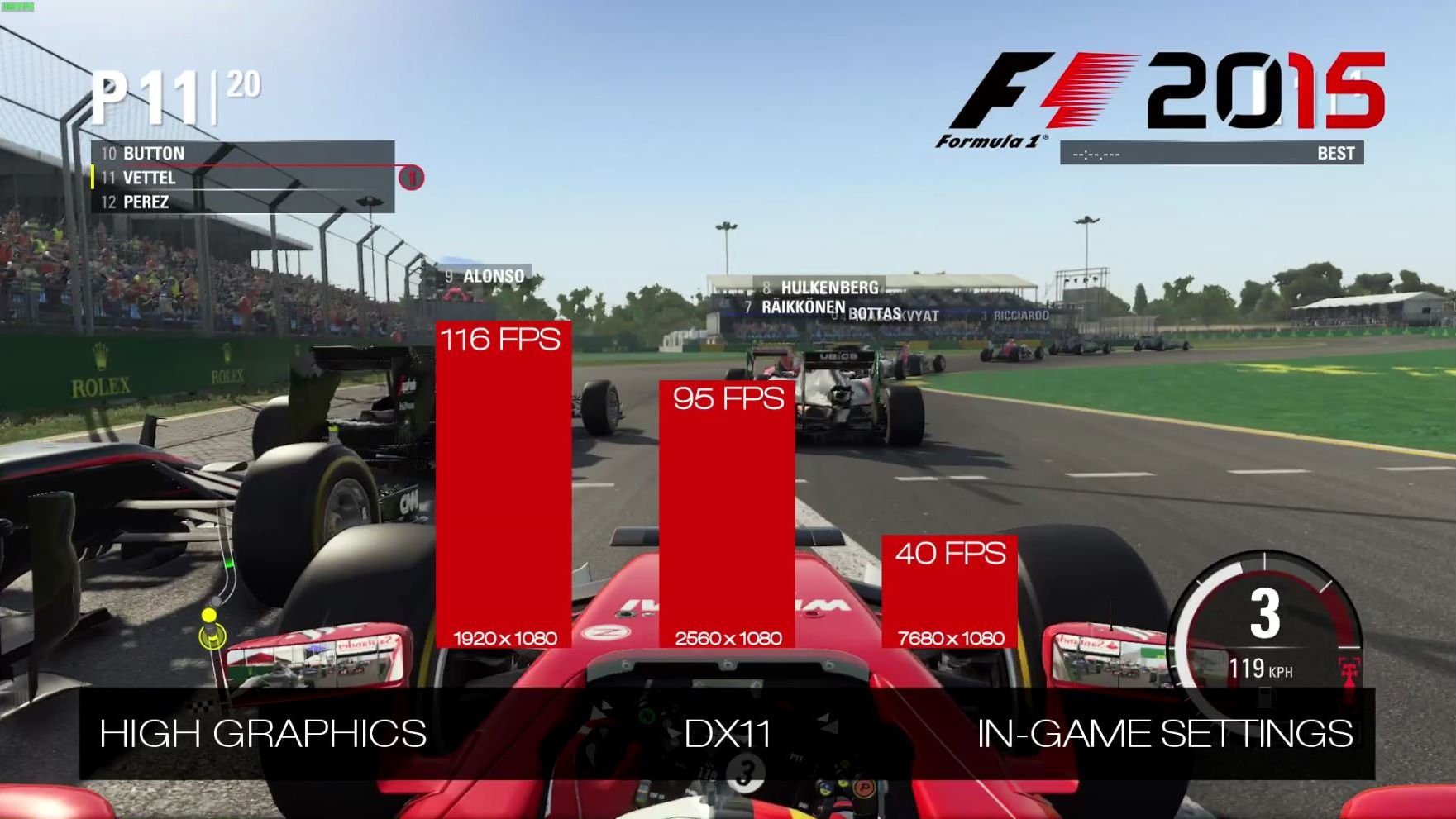 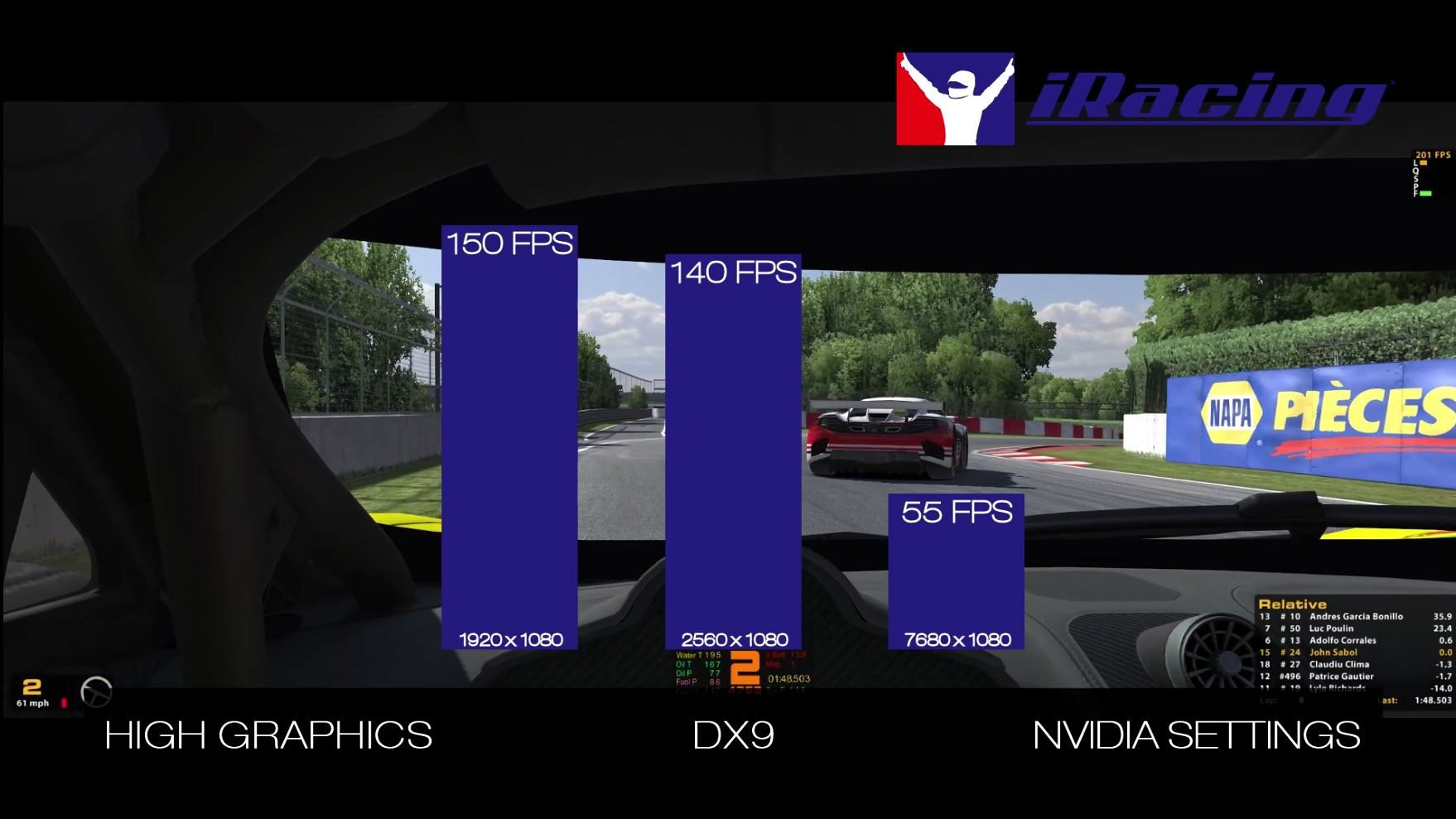 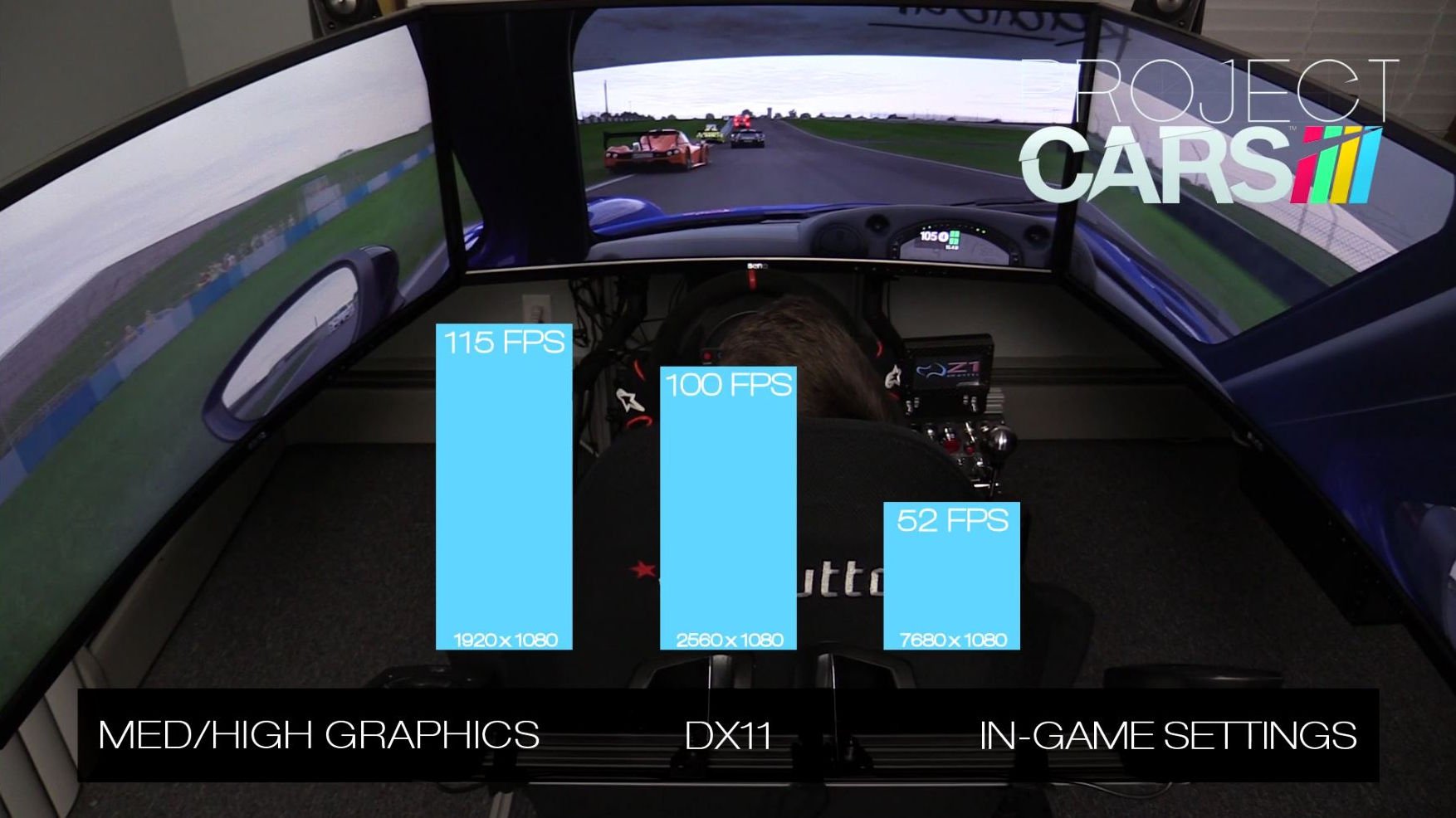 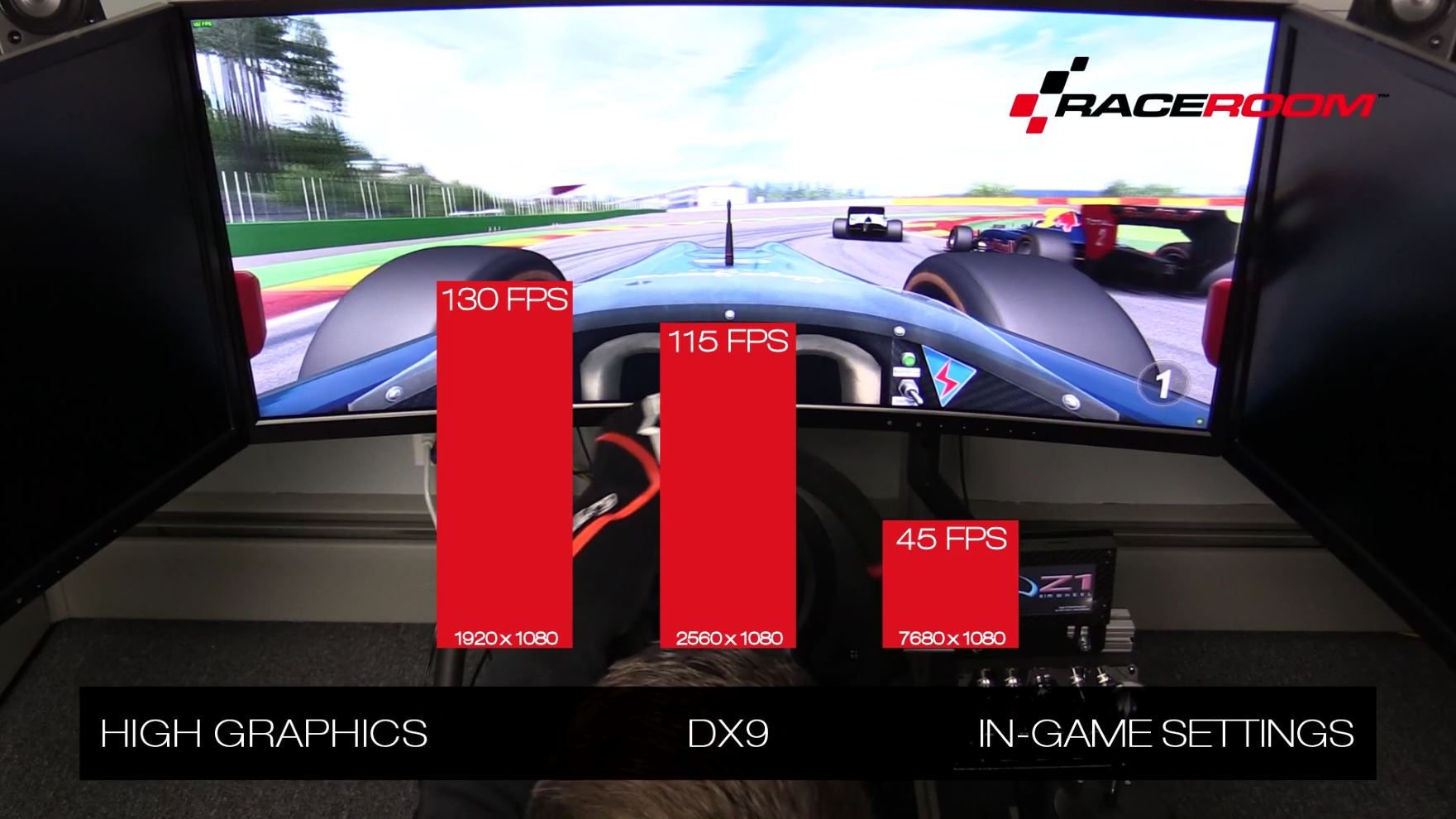 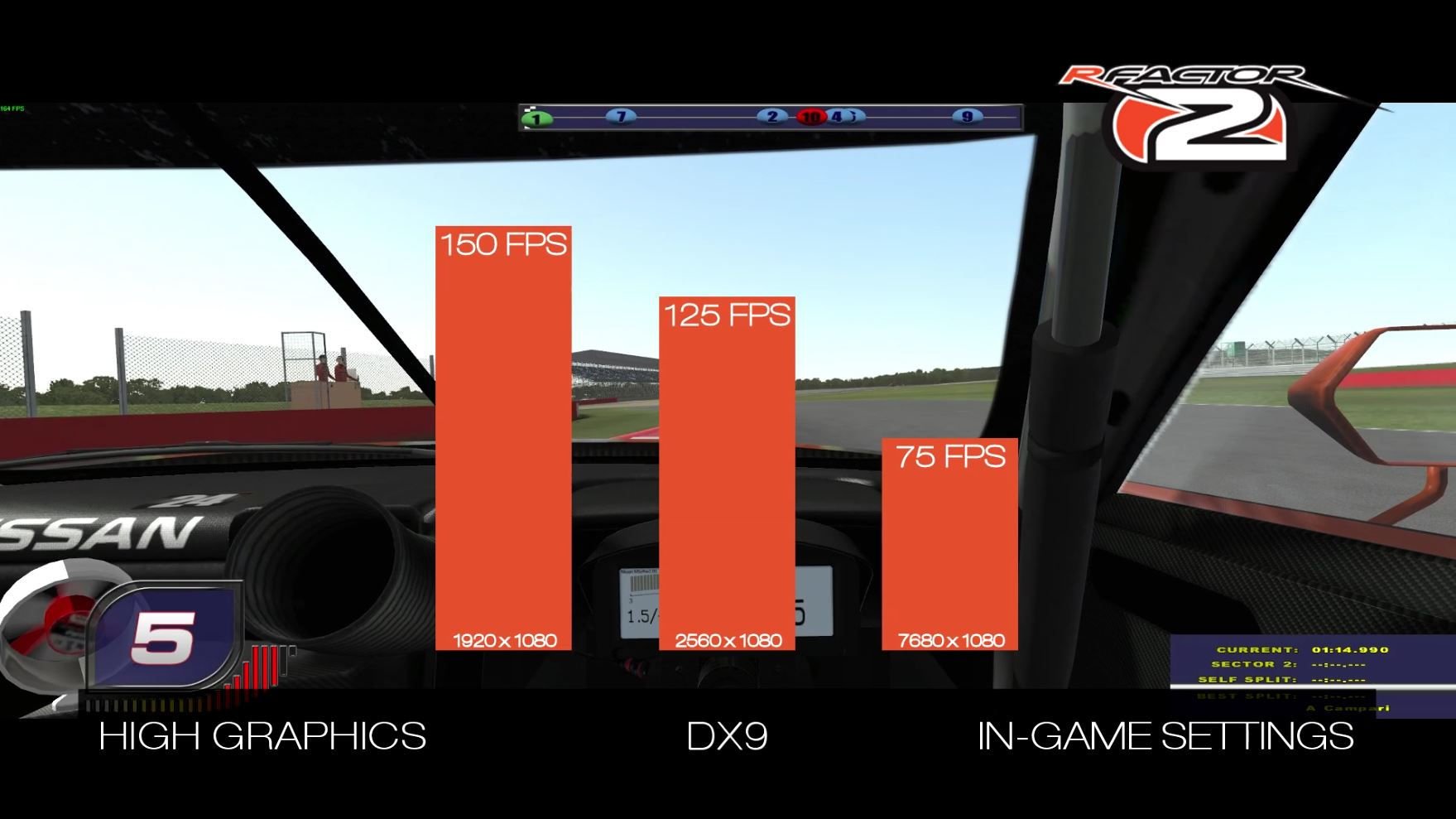 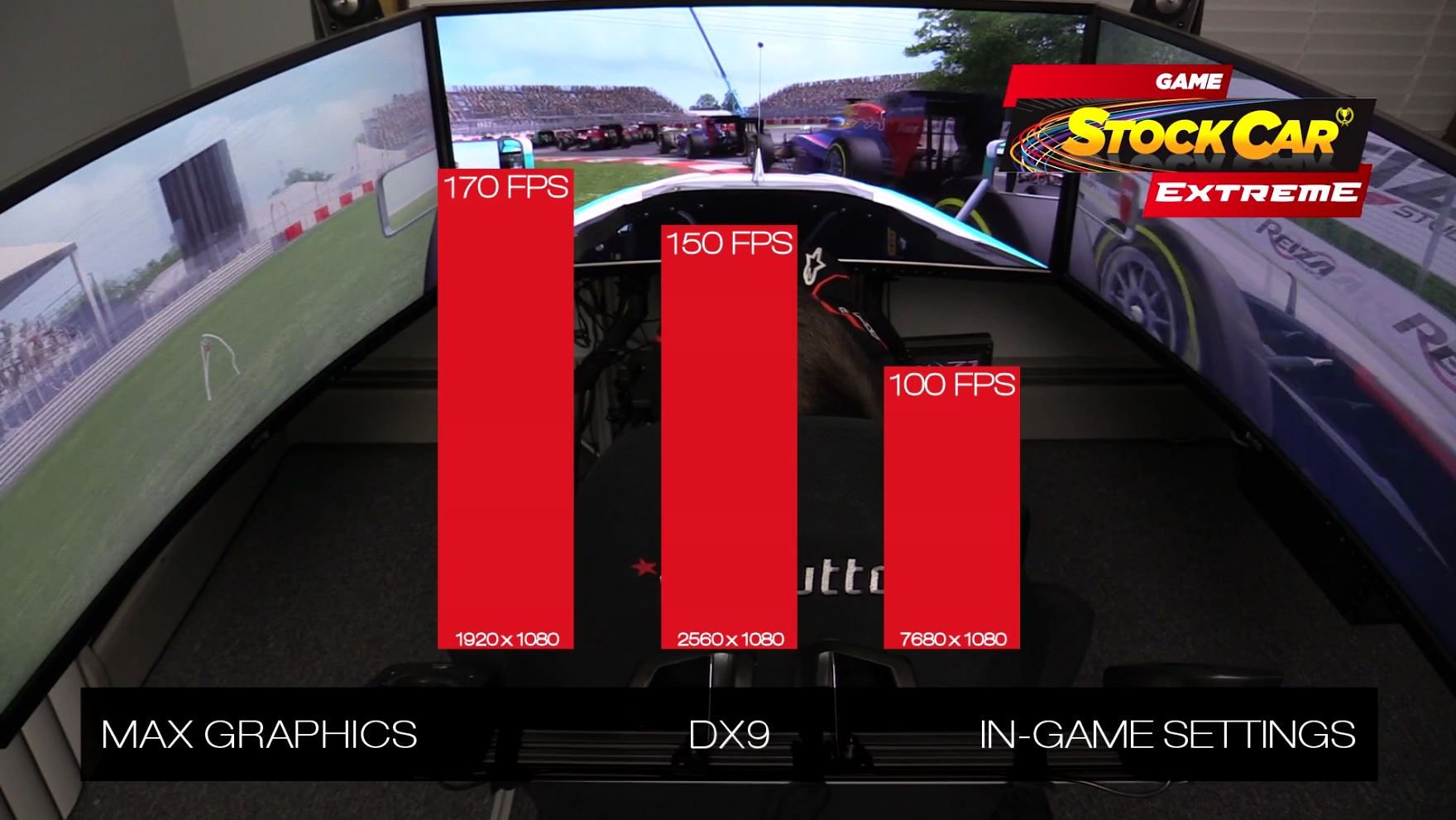 Overall it was a fascinating to see how the titles were similar and different.  DX11 titles tended to run at lower fps, more consistent fps, while DX9 titles required higher fps and struggled when the screen got crowded.  Was also interesting to see only one title, iRacing, perform better with the nvidia control panel running the show.

Unsurprisingly, the card gets a little tougher to justify for triple ultrawides.  While it can run most of these titles here with settings turned down – with the exception being F1 2015 and RaceRoom – doesn’t that defeat the purpose?  If you’re going to go buy fancy monitors like the BenQ XR3501, EVGA has a GTX 980 or GTX 980ti for you.

If one of those cards struggled to run The Bat, then I would knock them.  But for the mid-range GTX 970, it did a really good job.

And one more thing, because we know we’ll get questions.  We did try to do some overclocking but was never able to get any meaningful fps performance before hitting instability issues.  EVGA has already safely maxed out this card in my eyes.  I’m sure some of you can get a little something more – but I think the clock speeds are already aggressive enough.

With that said, we want to thank EVGA for sending us a card to not only be part of The Bat build but to review for all you sim racing fans.  As always, if you enjoyed the video we would appreciate a like and a subscribe if you aren’t already.  Also, let us know in the comments section if you want to see us do more sim racing benchmarks, maybe a second GTX 970 from EVGA to run in SLI?  Or a something a little more powerful for The Bat…?