Monitors are a big part part of the sim racing experience. While console users try to find the biggest, prettiest, new TV to play on, sim racers are constantly on the hunt for the fastest and smoothest monitors.  Why?  Because when driving on the edge, lag and stuttering usually ends with your virtual car meeting the virtual wall.

BenQ markets this monitor as the ultimate racing experience, so what better way to test that claim out then for us to test not one, not two, but three in triple configuration on the latest and greatest titles in sim racing.

Before we dive into how not only they performed but how we even mounted these monsters, lets go over the specs. 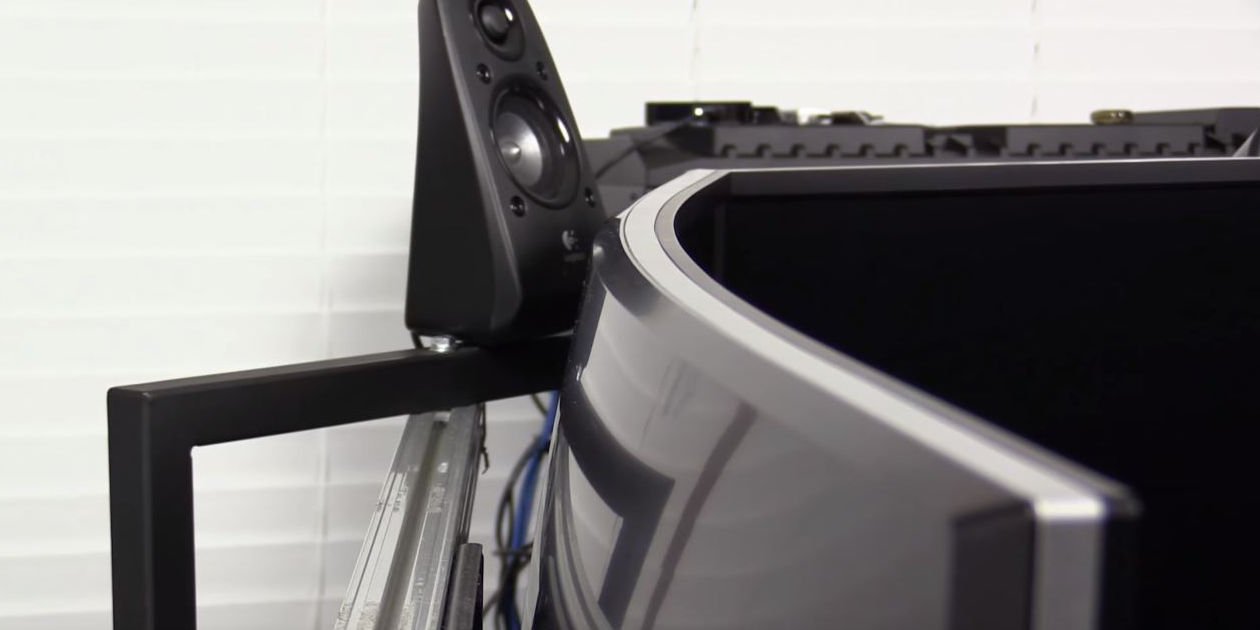 One of the most noticeable features of the monitor is the big 2000R curve.  2000R means that if you put a bunch of these monitors edge-to-edge, you’ll eventually create a circle with a radius of 2,000 mm.  This makes the XR3501 one of the curviest monitors on the market.

Another noticeable feature of the monitor is its 21:9 aspect ratio, making it an ultra wide compared to the traditional 16:9.  This translates into a resolution of 2560 x 1080, giving you 640 more pixels in width over a traditional 1920 x 1080 monitor.

At 35” inches diagonally and up to 2.125” thick, this is a big and heavy monitor.  The screen is 32.5” x 13.75” if you follow the curve. The casing isn’t much larger with relatively small bezels at about a half-inch.  This equals up to a total weight of almost 25 lbs, although that does include the heavy-duty metal base.

For the actual screen, BenQ stuffed a lot of nice technology into it.  They went with an A-MVA panel, which is starting to unseat IPS as the go to panel thanks to its color accuracy. It also has a 4ms response rate and can be run at 144Hz if you use a display port cable.

All of these specs add up to a retail price of $899.99 for the BenQ XR3501.  And even though that’s steep, it’s been popular enough to sell out.  We spoke with BenQ and they said they’d be back in stock in mid-December.

Now that we’ve gotten through the bullet points, let’s talk about our experience with these monitors. 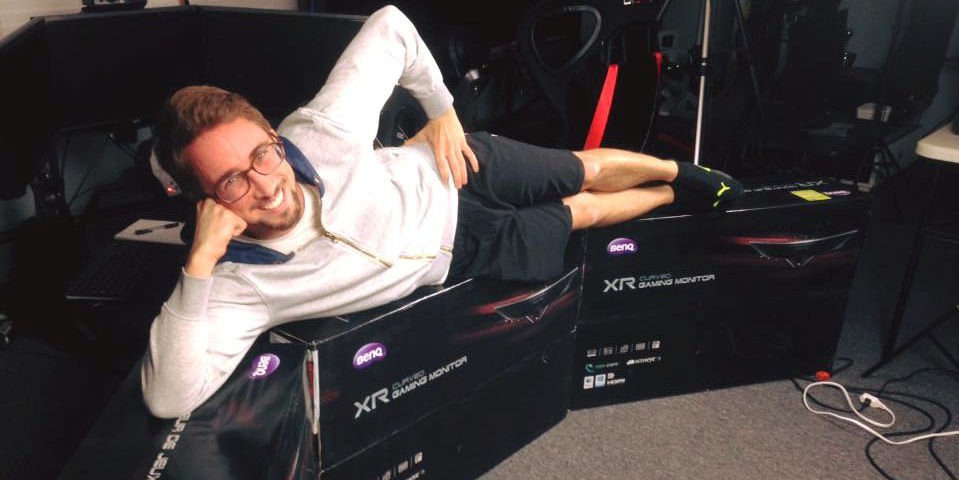 First up, the XR3501 box is the largest monitor box we’ve ever seen.  Thankfully, it’s not only big but built well enough to protect the monitors from dumb co-hosts.  Once opened, you find that the monitor and base come already installed, making life real easy on you.

Besides the shear size and weight of it, you notice right away what a nice looking monitor this is.  In racing terms, the color is similar to this year’s McLaren MP4-30.  It’s a very dark grey/black-ish color with a metal flake-like glossy finish.  To provide contrast, there’s a silver center stripe and chrome BenQ logo which compliments the chrome metal legs.  To round out the clean look, the menu buttons are located on the underside of the monitor, there’s a removable I/O cover on the back and the stand features a red cutout for cable management.

All in all, it’s a very pretty monitor.

Even though we hated to see the pretty stand go, they had to for our triples setup.  We swapped out the legs for an optional wall mount that you can buy from BenQ for $37. With 1/8” rolled steel, the wall mounts were plenty beefy.  With that said, the mounts eliminate the 20 degrees of up-down swivel of the stand, the only adjustment available on the XR3501.

At this point the big question was, “How are we going to mount these things?”  We ended up ditching the triple screen uprights from the Obutto Ozone and using the separate Obutto Revolution monitor stand we had laying around.  Having a separate stand eliminates any wheel shake turning into monitor shake, especially important for monitors this large.  We then reused the actual triple monitor pieces from the Ozone, but it quickly became clear that we needed to extend the side monitor mounts.  This resulted in aluminum profile being added, and luckily, everything lined up nicely once snugged down.  The final mod we did was add feet extensions on the monitor stand to ensure the monitors wouldn’t tip forward and crush John. 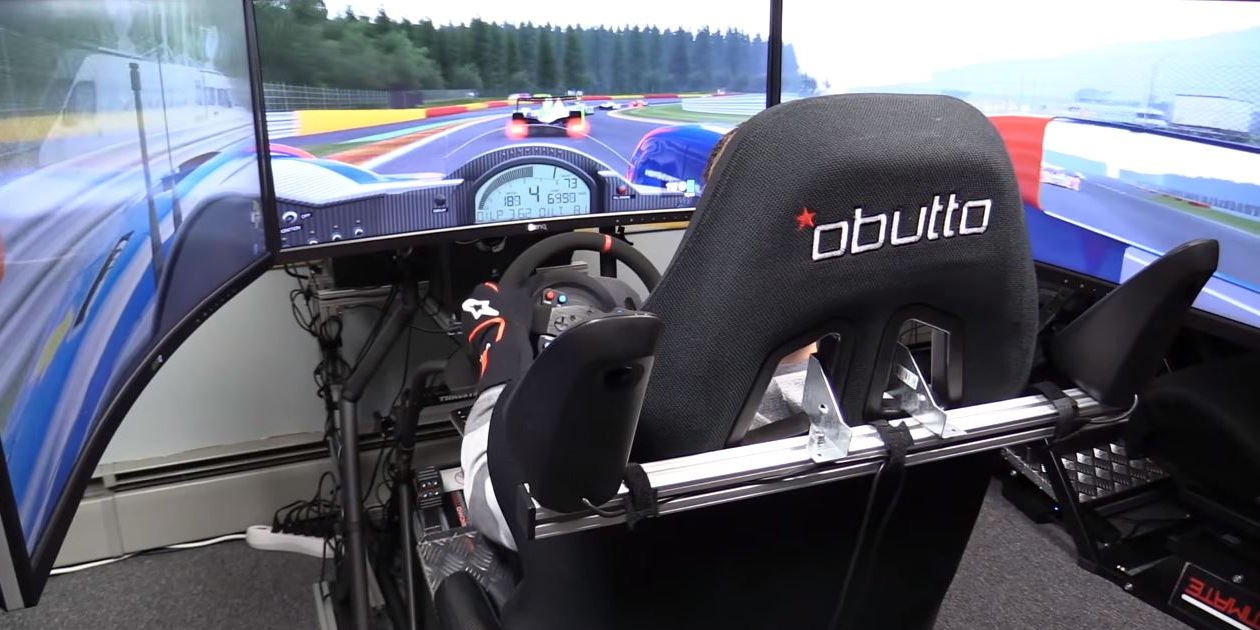 Let’s talk about the angle of these monitors.  There are a lot of opinions out there on ideal angle.  Our goal was to create 180 degrees of screen to maximize the level of immersion.  We also only had so much space to work with, with three other simulators sharing taking up wall space.  This goal, and the fact that the monitors have a significant curve, resulted in them being sucked in really tight at a 55-degree angle.

So tight in fact, that we have deemed this build The Bat, cause it kind of looks like bat wings.  Or we’re just lame… 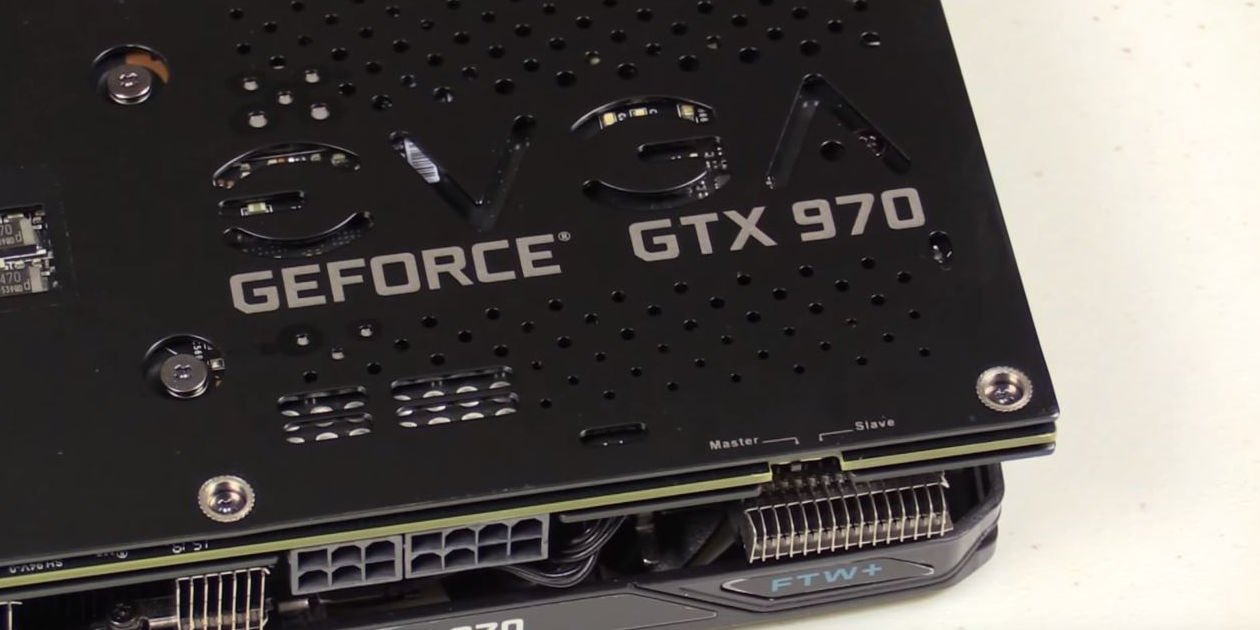 The monitors were then connected to our EVGA GTX 970 FTW+ via the Display Port to Mini Display Port cable provided by BenQ to take advantage of the 144Hz.  If you do go with a display port other then the one provided, be aware that space is limited around the I/O.  Chunkier cables, like our braided HDMI, will not fit.  Also of note is the wall mount is just too big to place the I/O cover on.

So what was our first impression of triple BenQ XR3501’s?  F***ing awesome!

We have never felt more inside the car when sim racing.  The on-screen cockpit feels like a 1:1 ratio to the size of the real cars cockpit.  Between the screen size, aspect ratio and curve, they all work together to make a perfect combo. 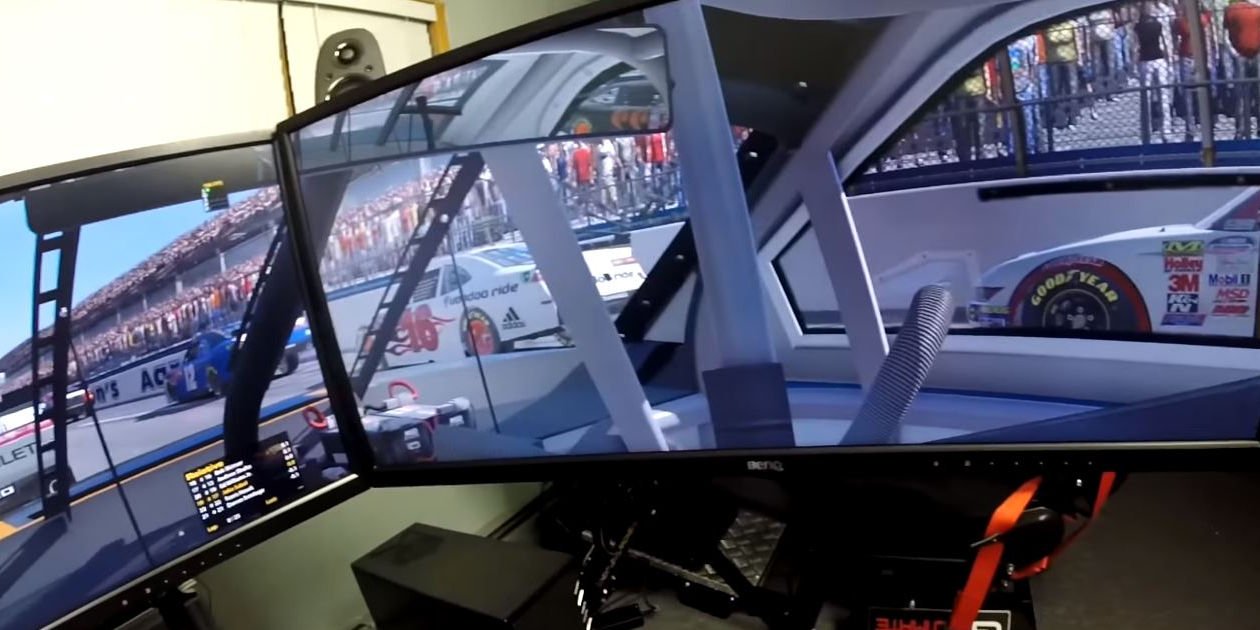 Another thing we loved was the 144Hz and 4ms response rate.  Everything is just so smooth at 144Hz.  The monitors even do a good job of keeping everything smooth when the frame rates dip below 144 fps.

Speaking of sub-144 fps, let’s talk about the elephant in the room.  The monitor isn’t Freesync or Gsync enabled.  In theory, this means you need to be running at 144 fps to truly capture the smoothness of 144Hz, since the monitor won’t match fps like a Freesync or Gsync monitor does.  With that said, there were titles we were only able to get 80-110 fps out of and not only did they run much smoother than a 60Hz monitor, we couldn’t spot any tearing or stuttering.

And now for the second elephant in the room, the resolution.  We’re sure a lot of you think that 2560 x 1080 is not enough for a monitor this size, and you’re right and wrong.  Yes, this isn’t the crispest monitor.  John recently did a build with the LG 29UM65 29” ultra wide which also has a 2560 x 1080 screen, and it was a crisper image because it’s a much smaller monitor. 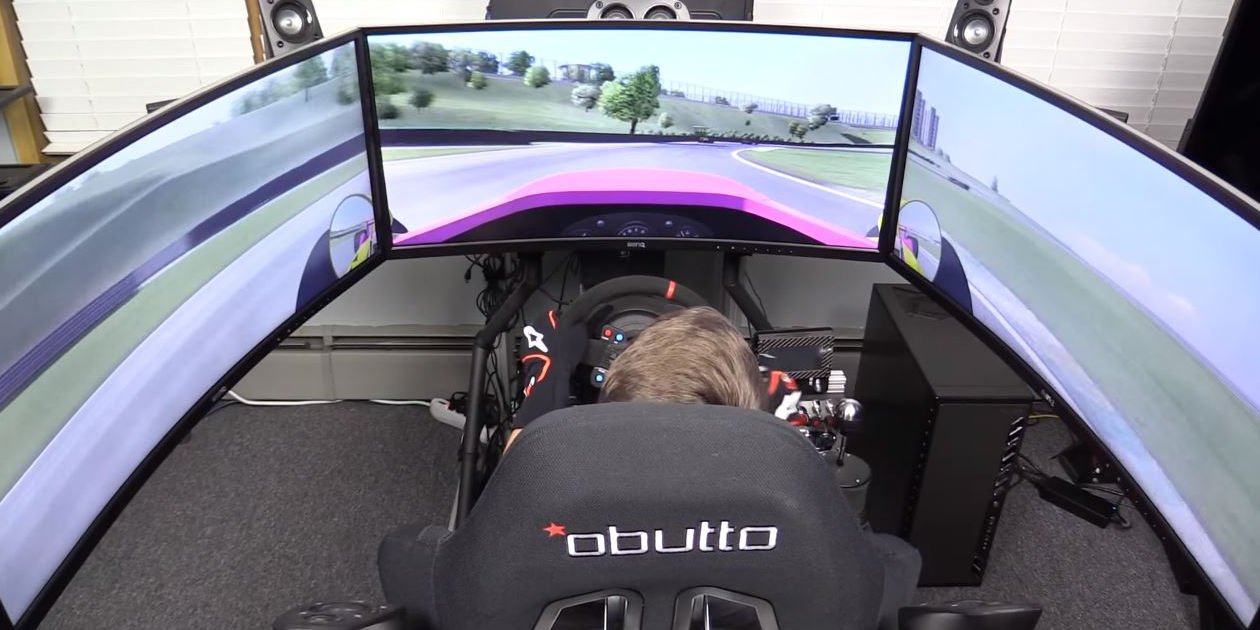 With that said, we don’t want the XR3501 to have any more pixels.  First, any lack of crispness you notice goes away once gaming.  Second, the triples resolution is already 7680 x 1080 and the PC is already having enough of a time powering that many pixels.  Going to 7680 x 1440 would require the GPU to drive 2.76M – or 33% – more pixels.  That’s not happening. Sure, more pixels sound fun, but if you have to turn all your graphic settings down, or suffer lower fps, what’s the point?

Last thing we want to cover is the A-MVA panel.  The panel’s color really is fantastic.  The monitor comes with three “gaming modes,” with Mode 1 designed for racing games.  Honestly, we couldn’t tell the difference between the three gaming modes and actually stuck with the sRGB mode because of the color accuracy after BenQ assured us there’s no performance difference between the different modes.

Another feature of the panel is BenQ’s eyecare.  John’s been battling eye irritation for months, and part of that was due to looking at his old Acer G235H’s all day.  Even though the BenQ’s are much larger, they are easier on his eyes and have allowed him to get back to wearing contacts.

Two thing you probably notice that are missing from the pro and cons; resolution and Freesync / Gsync. We’re calling both a wash since neither had a significant impact on our opinion, good or bad.

With that, let’s get to final thoughts.

As you can probably tell by now, we have very little bad to say about the BenQ XR3501 35” Ultra Wide Curved monitor in triples. In our opinion, there isn’t a better way to race out there today. The combination of screen size, curve, refresh rate, resolution, color accuracy, bezel size and even less thought of features – like ease on your eyes – creates an overall package that is perfect for sim racing.

The only major drawback to the monitors is the price. These monitors are certainly for the high-end sim racing crowd. With that said, they are priced competitively to many of the LED TV’s that we see on high-end simulators. What would we rather have, a flat – or slightly curved – 50” TV that makes us look like a mouse in the car, with high latency and low refresh rate, or a perfectly sized BenQ XR3501 with no noticeable latency, smooth refresh rate and huge curve that basks us in glowy goodness?

The BenQ XR3501 was sold out but is slowly coming back in-stock for $899.99.  If you can swing the price, we definitely suggest three of them. 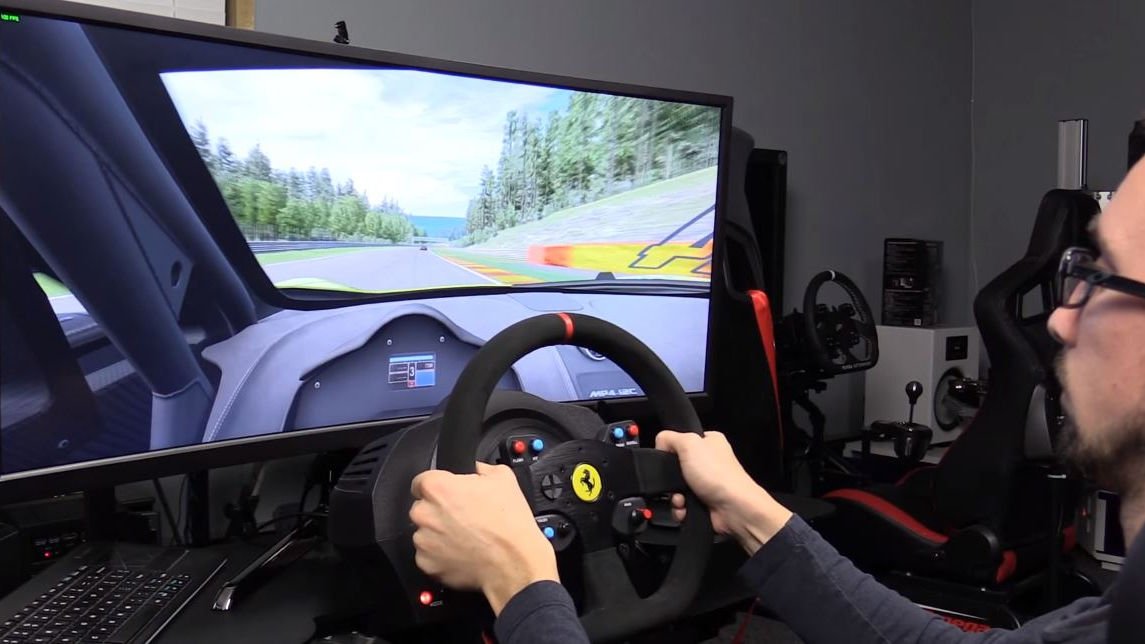 And for those of you who can’t swing for a triple setup like ours, we also reviewed the BenQ XR3501 in single monitor form to see how it compares to the traditional 1920 x 1080 monitor for sim racing.

That’s a wrap on our review of the BenQ XR3501 in triples. Would like to thank BenQ for sending us out these beauties and making all of John’s dreams come true.  Seriously, he won’t stop smiling…he might be broken…