Presenting our review of the Acer Predator Z35 monitor.  This is a particularly interesting review because the Z35 is spec-by-spec nearly identical to the BenQ XR3501 monitor that we reviewed last year.

But there are differences.

Do these differences put the Z35 over the top?  Let’s find out.

As the name suggests, the Acer Predator Z35 is a 35” ultrawide curved monitor, featuring a 21:9 aspect ratio and 2000R curve.  The 2000R rating means that if you placed a whole bunch of these monitors side-by-side, it would form a circle with a radius of 2,000 mm.

Up until this point, we may as well been reading the spec sheet for the BenQ XR3501, but from here on out we see differences. 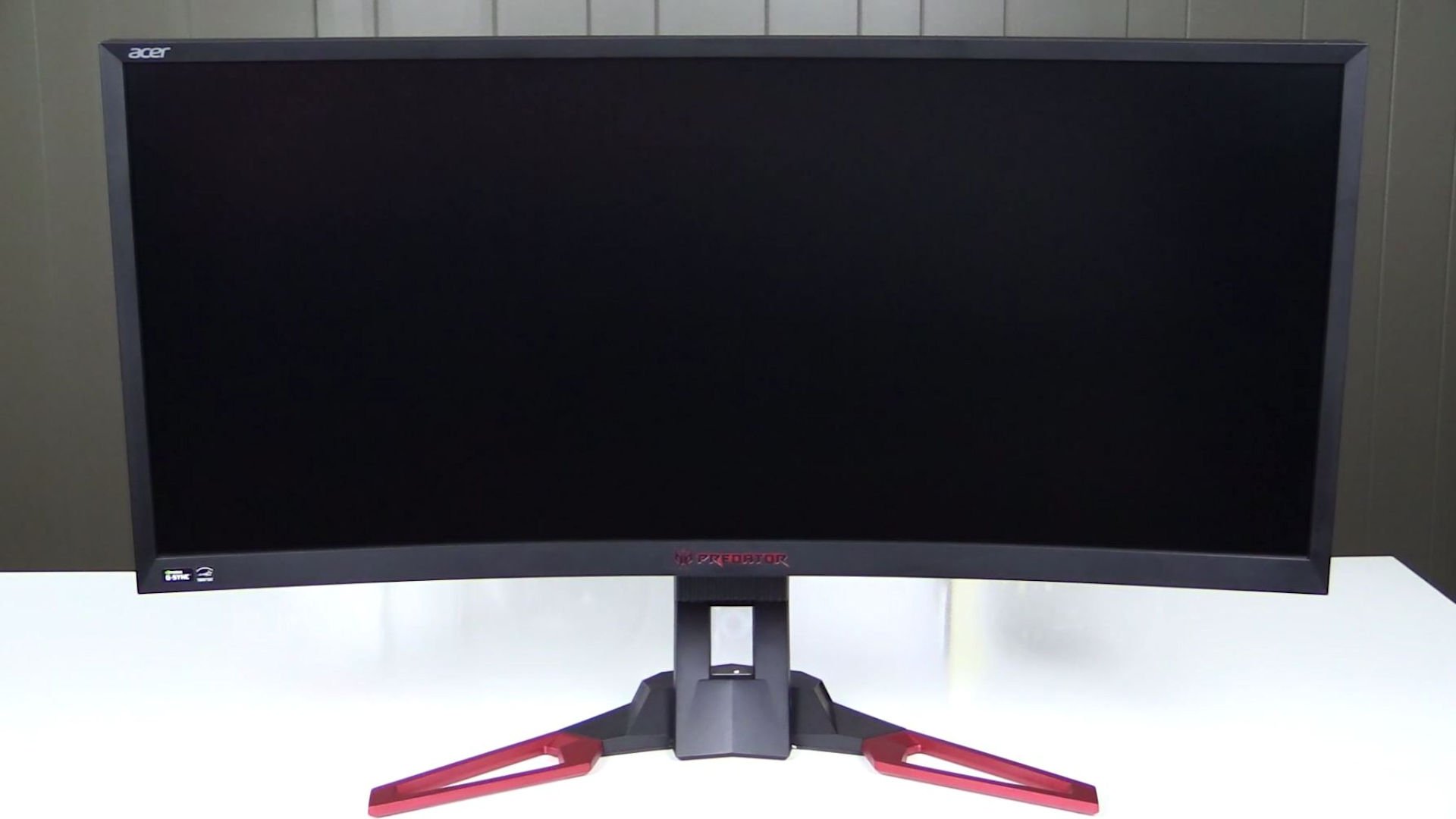 First up, there are physical differences.  The Acer has a very nice – and heavy – stand that not only tilts -5 – 25 degrees but also has height adjustment.

Did I mention it’s heavy?  The Z35 is the heaviest monitor I’ve held, especially with the stand connected.  While it’s a shame to lose such a nice stand due to sim racing duty – the metal feet are really nice – it does lighten up the load…a little bit.  Even sans stand, the Z35 panel is still heavy.

Speaking of the panel, it has a few party tricks that the BenQ doesn’t, including the ability to overclock the refresh rate to 200 Hz and Nvidia G-Sync technology.  G-Sync allows the monitor to match the refresh rate to the frames per second (fps) of the game when paired with an Nvidia graphics card, eliminating any screen tearing that may otherwise occur.

Speaking of the red capped exhaust, the design attributes of the Z35 really are in the eye of the beholder.  While this is the case with any product to some extent, this could be more so for the Z35, with its aggressive red accenting, large ‘Predator’ logos and strip of LED’s that can change between red, green, blue, white, orange, and can range from on all the time, to ‘breathing’, to off.

Joining the LED’s on the bottom of the monitor are the unmarked power and navigation buttons that allow you to make all the changes you need – such as overclocking – in the interface, without the need of secondary software, which is nice.

My initial impression of the Z35 was one of deja vu.  I removed the center BenQ XR3501 on my rig, aka ‘The Bat’, and mounted the Z35 with the same monitor mount after using some wall outlet spacers and a trip to the hardware store for longer bolts.  While there was no way to get the differing brand monitors to align, having them side-by-side did have its advantages, with the first being comparing the VA screens.

Remember when I said deja vu?  The screen is why.  I really struggled to find a difference between the two 2560 x 1080 panels of the Acer and BenQ.  We raved about the BenQ’s color accuracy and I feel the same about Acer’s big curved screen.  The semblance of a difference that I saw was the Acer being slightly better at off-angle viewing, with less color-fade than the BenQ, but it’s not much of a difference.

Earlier I said that the design of the Z35 would be polarizing but I’m going to now insert foot in mouth and say that I’m quite torn by it.  While I like that it matches my predominantly red and black rig theme – especially with the Next Level Racing rig I recently moved over – and I like the very high-end looking logo inserts they used, I’m not in love with the mat-finish.  It comes off kind of cheap to me, especially for the price.  While I don’t like super glossy – fingerprint inducing – monitors, I do like the semi-gloss look, for an upscale happy medium, and would have liked to seen that here. 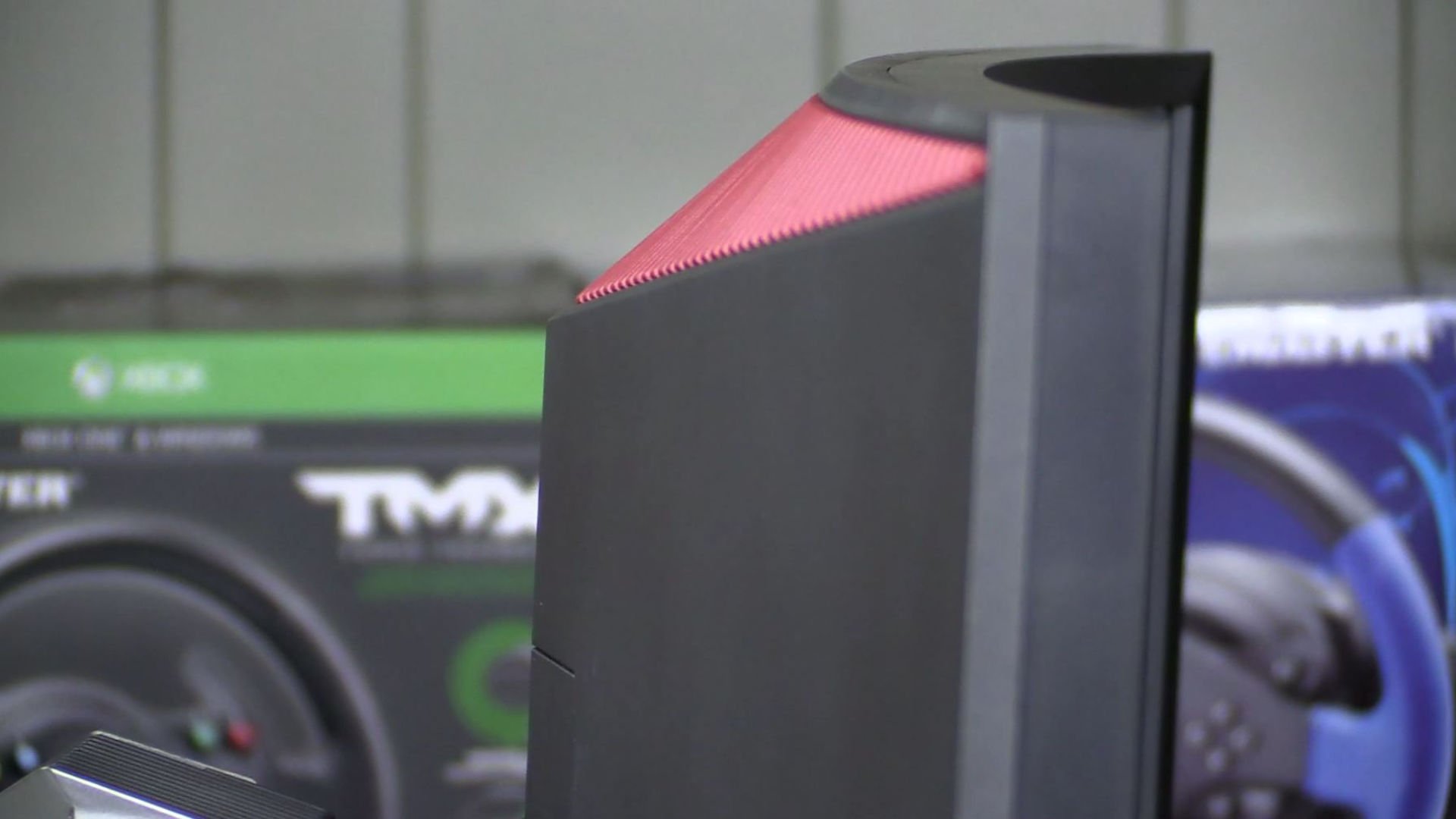 35” ultrawide is the perfect size.  A 35” ultrawide is the same height as a 16:9 27” monitor and we believe that size does the best job of giving you a 1:1 sizing of your virtual car to the real deal.  The 21:9 just gives you more side to side real estate, and that’s nice to have.

The curve screen also contributes to a more immersive experience, bringing you into the game.  While I don’t know why anyone would want a curved TV when you’re watching from different viewing angles, for gaming when the screen in right in front of you, it’s perfect, especially with the noticeable 2000R curve.

While the 2560 x 1080 resolution doesn’t sound impressive on such a large monitor, and it really isn’t in desktop mode with noticeable large pixels, for gaming it works great.  The games look fantastic and doesn’t have me wanting for more pixels that will just put more load on my graphics card. 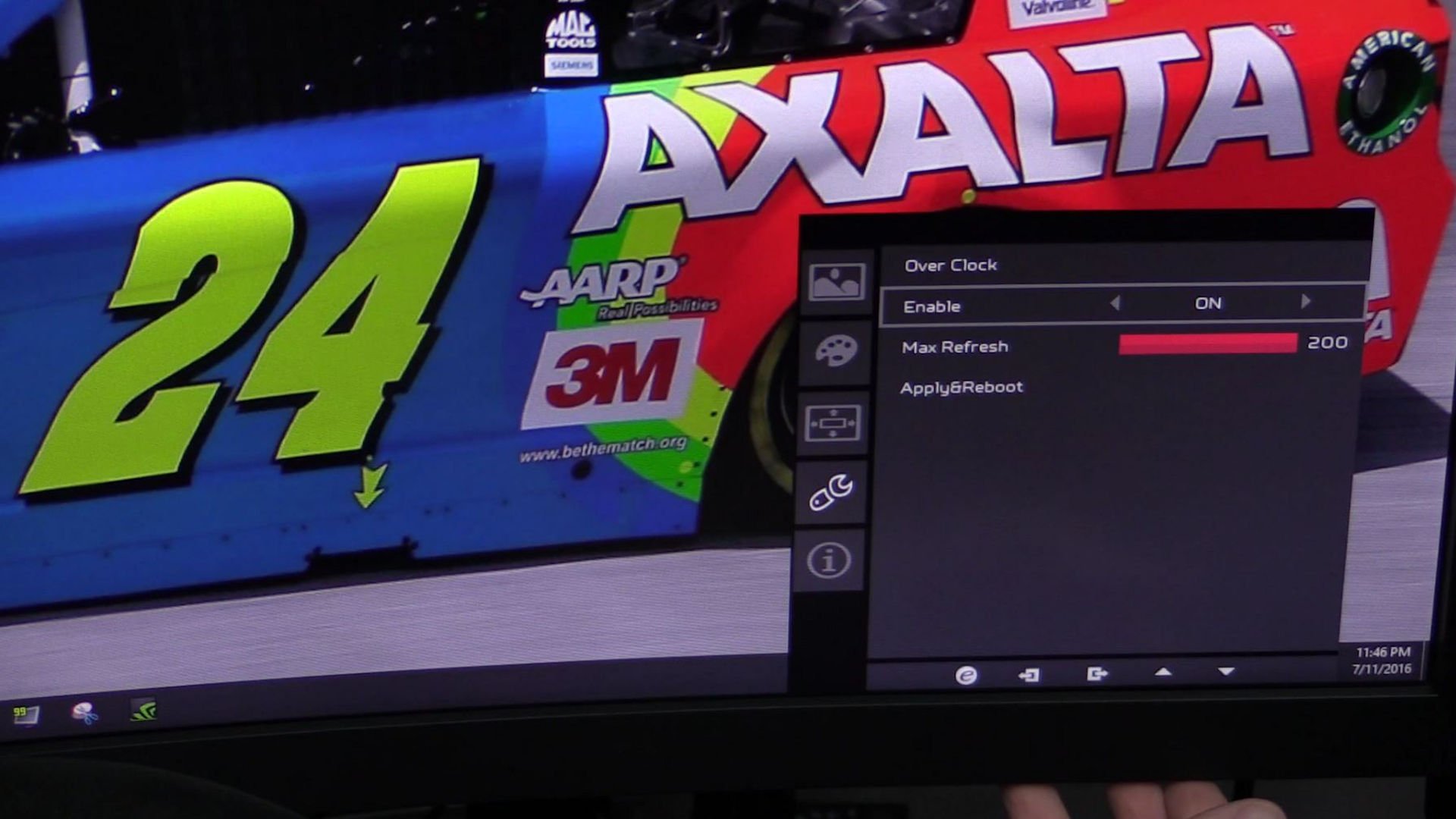 So with that out of the way, let’s talk refresh rate.  First off, 144 Hz continues to be awesome.  For comparison I capped the refresh rate at 60 Hz and it honestly felt like I was driving drunk.  Now, I drove fine enough with 60 Hz monitors for years, but once you go 144 Hz, there’s no way to go back.  It’s just so smooth.  As our ISRTV teammate Scott Holmes said when he upgraded to his 144 Hz monitors, he felt like he was cheating.

But that’s not all on the refresh rate front.  The Z35 can perform the party trick of overclocking its refresh rate all the way to 200 Hz. 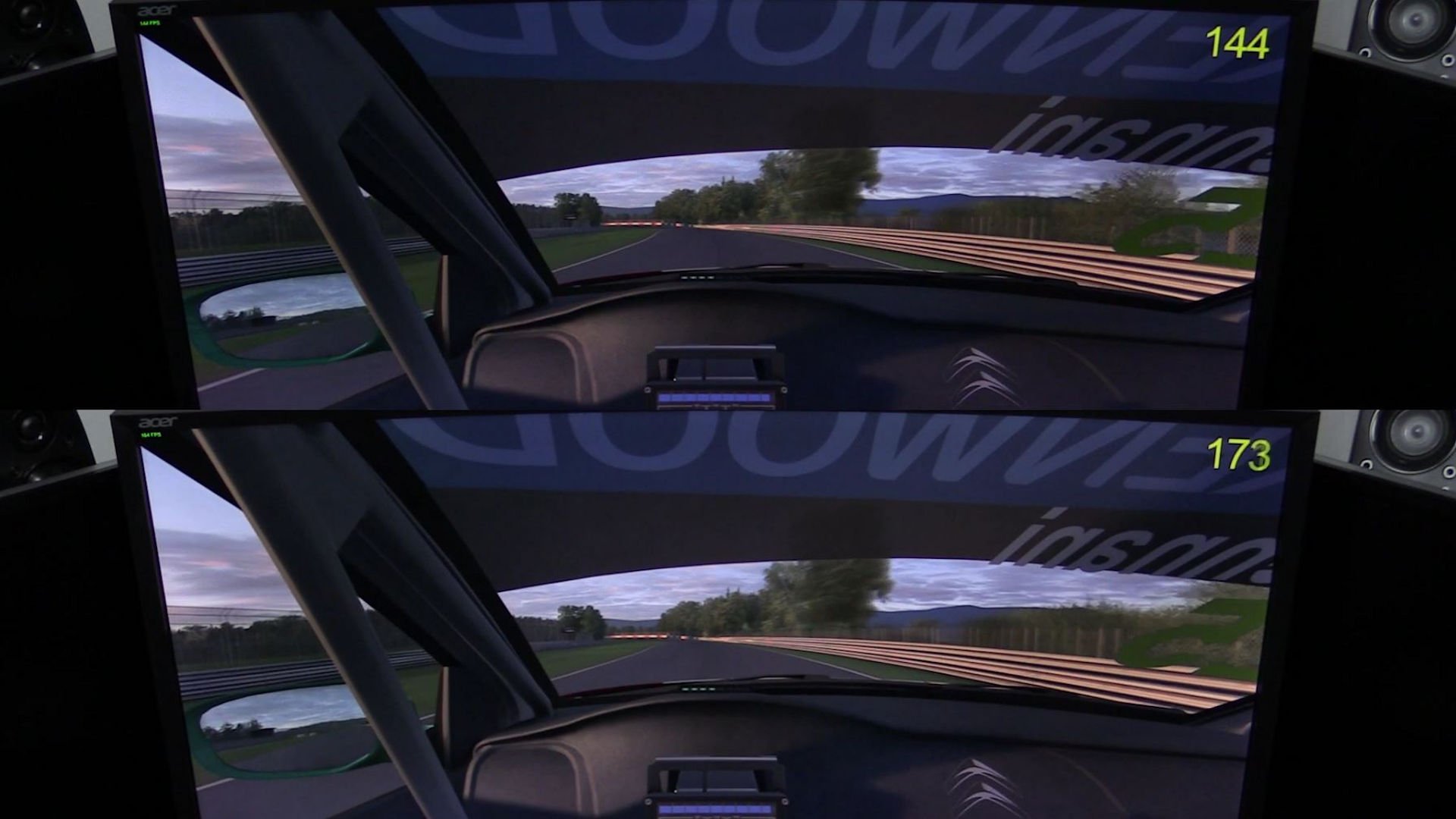 200 Hz is a nice big number to stick on the box, but I’m just going to stick to 144 Hz and focus on keeping the frames per second north of 85.

Unlike the BenQ’s, the Z35 has G-Sync to always ensure smooth game play no matter the frame rate.

So does it work?

Absolutely.  In terms of achieving what it set off to do, G-Sync works perfectly.  The frame rate and refresh rate sync up and there is no noticeable lag or issues.  It just works.

But, does it improve your experience over a non-Gsync monitor?

The thing about G-Sync is that you need to be running low frames per second to notice it working.  Like 30 fps low.  I ran the Z35 wth G-Sync off and on in a full field of cars in RaceRoom, with average fps in the 40-50 fps range, and couldn’t see a difference.  Same goes for the non-G-Sync BenQ XR3501.

And by the time I could see a difference with G-Sync, it was at such low fps that the experience was approaching slideshow levels.

While in theory, G-sync allows you to crank your graphics up without fearing the consequences of tearing, I would much rather turn the graphics to a level that allows me to run 85+ fps and take advantage of the 144 Hz, regardless of G-Sync being on or off.

So this begs the question, why do you need G-Sync?

Piece of mind?  If I own an Nvidia graphics card – and I do – I would prefer to have G-Sync so I know that I’m getting the best graphical experience possible with matched fps and refresh rate.  I may not be able to perceive it with my eyes, but I know it and will happily take the placebo effect.

But would I miss G-Sync if I didn’t have it?

G-Sync is not the silver bullet that I – and I believe a lot of people – have been lead to believe.  I firmly believe that that title belongs to the 144 Hz refresh rate, which seems to have the greatest single impact on the experience.

At the top I asked the question of whether or not the extra bells and whistles of the Acer Predator Z35 put it over the top of the BenQ XR3501’s that I’ve been sporting for awhile now, and as unfulfilling as this may sound for those of you who just want a “yes or no” answer, I think it “depends”.

Really the difference comes down to whether or not you like the style and the price compared to not only the BenQ, but rest of the competition.

And lets be honest, there is a lot of competition out there at this price point.  VR and even Acer’s own X34 are in the price ballpark.  And while my only VR experience have been two WIP demo’s at E3 – so I’m still not fully sure what I think of that in its first gen iteration until we rub enough pennies together here at Inside Sim Racing to purchase an HTC Vive – and I haven’t tried the X34 – but based on the specs, I’m not sold that 4K is that much of an improvement in gaming and worth losing refresh rate and fps over.

So that leaves me still recommending the Acer Predator Z35 monitor for sim racing duty.  Size, curve, color, resolution (for gaming), and refresh rate make it a thumbs up from me.  I’d even keep it on The Bat if Acer sent me two more…