The premise of the Formula RaceRoom 3 series is to provide a car with lower engine output and high-downforce. The FR3 is also meant to closely resemble the characteristics of recent real Formula 3 cars. Weighing just 565 kg with its driver, the car is powered by a naturally aspirated inline four cylinder 2.0 litre engine producing 240 bhp. Redlining at 7300 rpm, the car has a top speed of around 250 kmh! The FR3 is fitted with a paddle shifted six-speed gearbox.

You can purchase the new series in the RaceRoom Store for 349vRP, while one of the 26 individual liveries will set you back, 29vRP.

The FR3 is an open-wheel racing machine with highly efficient aerodynamics and incredibly performant brakes resulting in very quick lap times. It sits in the middle of the Formula RaceRoom ladder and gives you the best of both sides. You’ll need the precision and racecraft of the slower formula cars, and you get the adrenaline and excitement of the faster formula cars. It is the logical step up from the Tatuus F4 and it will prepare you to take on the F2 class. All in all the FR3 is a pivotal car to master and a lot of fun to drive at the same time! 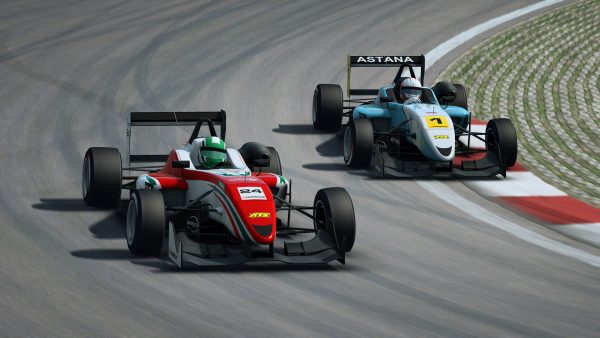 Sector 3 also released an update to their title addressing several well documented issues in the general game, multiplayer, sounds, physics, AI, portal and backend. For your convenience, the complete changelog has been included here below.