G’Day everyone, this is a first look video of the new Gran Turismo Sport branded wheel from Thrustmaster which I spotted at the unveiling of Gran Turismo Sport in London. I wasn’t really expecting to see any other sim racing hardware other than what was being used on the demo rigs at the front and rear of the venue.

So naturally I was excited to see this new wheel, actually it was one of the first things that caught my eye as I entered the main hall of the Copper Box Arena. The new Thrustmaster wheel immediately stood out by virtue of its almost organically shaped wheelbase and the rim’s unusual button configuration. Upon taking a closer look at the wheel, I noticed several things that were a distinct departure from Thrustmaster’s T300 series design. The wheelbase had quite appealing swooped and curved lines with a chic matte, black plastic finish. 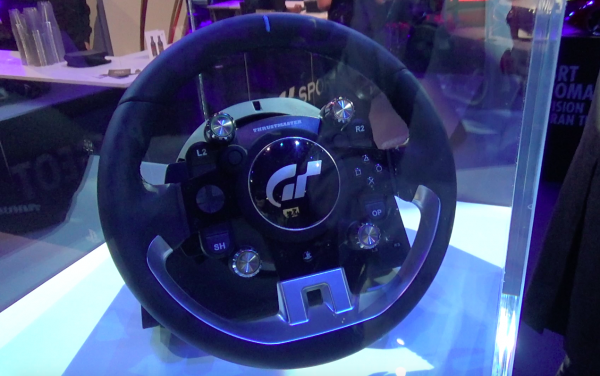 On the top right side of the base there was a mesh covered opening, which I assume is for extra cooling of whatever was lurking beneath it. The four large knobs on the leather clad rim were actually rotary knobs each with their own Playstation coloured rings, these may have something to do with the release of the Playstation VR head mounted display. As well as the four rotaries, there were two joystick controls on either side, as well as the familiar Playstation controller’s buttons. I could see that the rims diameter was 28 cm or 11 inches. It looked robustly padded as well. A nice touch was the inlayed bright blue stitching marking the top centre position of the wheel.

The new wheel’s paddle shifters have also been given a more utilitarian race look as compared to the curvy paddles of the current Thrustmaster rims. Judging by the rims attachment to the base, safe to say the wheelbase should be compatible with Thrustmaster’s ecco system. Inspecting the rear of the wheelbase, my first thought was DD motor, the Dayton Puck transducer shaped cover looked very interesting indeed. There was also an extra input / output port that may hint at something special as well.

During the after party, I was able to chat with Kazunori-san about the wheel, he told me that he had input regarding the design and that the main characteristics were its linearity, it is very powerful with high torque, which leads me to speculate that it may be some type of DD wheel.

So, going on very limited information, it could be a belt driven wheel or a DD wheel, its anyone’s guess as to what this wheel may end up being. One thing is for certain though, as soon as we know more so will all of you.