Presenting my Thrustmaster T3PA-Pro Pedal set  review and first look. They are a new welcome addition to the eco system line up of Thrustmaster products. You may be saying, well those look like the T500 RS pedals and essentially they are. The main differences are the addition of the conical brake mod that you can get with the standard T3PA pedals. They also removed the pinch guards and the pedals faces have black accent versus red on the T500 RS set. .

They should be available by the end of the month in Europe for suggested retail price of €169.99 and by mid April here in the US for $149.99. Check with your local Thrustmaster dealer or distributor. Here in the states, Amazon is a good source.

The T3PA-Pro pedals can be used in two different positions. Floor mounted or F1 style, or inverted / suspended position which is referred to as GT or Rally style. 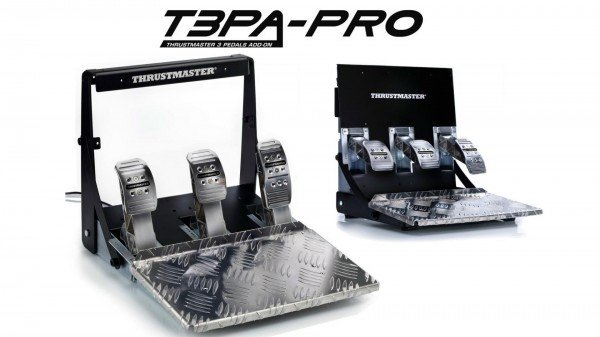 Since they are part of the Eco System, they work with the T500 RS, TX 458 Italia Racing wheel and the T300 RS. Obviously if you bought a T500 you wouldn’t need this set, but for the TX or T300, they make for a great add on. That means they are compatible with the PC, PS3, PS4 and Xbox One.

These pedals will only work if you have them plugged into a Thrustmaster wheel unless you get an adapter to plug them into a USB port.

After unpacking the first thing you should do is go to the Thrustmaster website and download the assembly instructions if you need to. The pamphlet inside the box recommends that and doesn’t show you anything except the different mounting positions which are Floor Mounted or F1 style which is how they come, or GT style. GT style will need some re-configuring and it’s easy to do, but you should probably check the manual to be sure.

If you are going to leave them in the floor mounted position, you could essentially remove the back bar which is attached with a little c clip. Some rigs like the GT Omega Pro, won’t accommodate inverting or even the pedals with the bar. 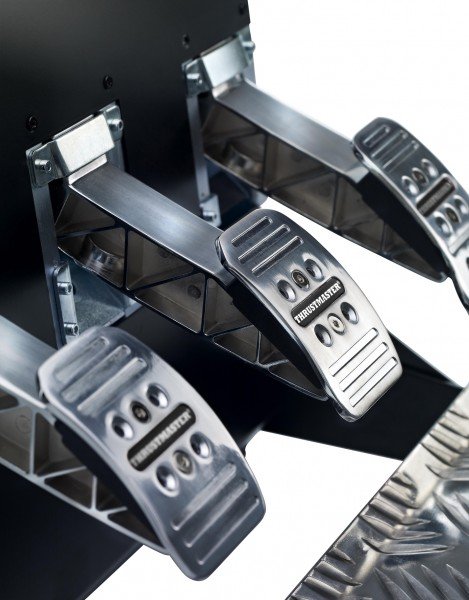 There’s also two brake mods now. The one that came with the original set of T500 pedals which is referred to as “the spring brake mod”. It’s composed of an additional compression spring and the pressure force can be adjusted between 30 and 35 pounds. It also comes with the conical brake mod that came with the T3PA pedals. It’s composed of a conical stop made from industrial-grade high-density rubber, the pressure force can be adjusted between 45 and 70 pounds. I recommend the conical mod over the stiff brake mod. The conical mod or spring brake mod can be mounted in three locations for varying degrees of pressure. 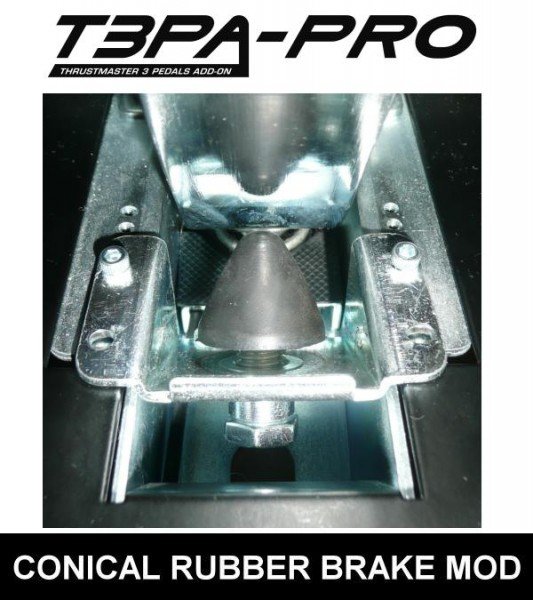 Most cockpits and wheel stands are drilled to accept the T500 pedals and these are identical. You’ll need at least two M6 10 mm maximum length bolts or screws to attach them. Your local hardware store should have them for less than a dollar. Remember though, some cockpits will need you to remove this bar to fit. The GT Omega Pro I have behind me is a perfect example of having to do this.

If you have an older or custom chassis need to drill the pedal deck, there’s a template at Thrustmasters website..

If you’ve inverted them, your have two hard mount spots if you have them in the floor mount spots you have six holes to choose from. Also, once you have them connected to your wheel base, you’ll need to invert the electronics by holding the mode button for a few seconds. When you let go, the light should go green which means it’s in inverted mode. 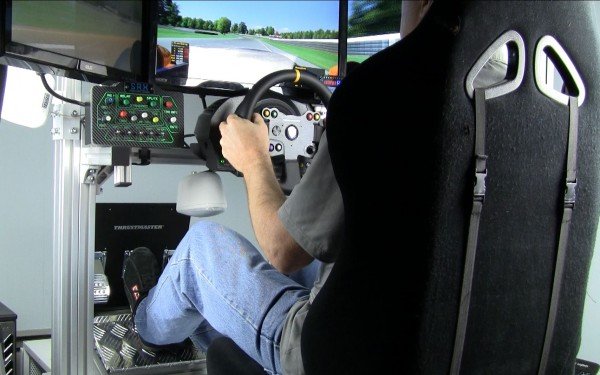 So, enough about setup, now onto how they perform. With the conical brake mod, I highly recommend this set. They offer 1028 steps of resolution which makes for smooth operation on all three pedals. I prefer the conical brake mod and in all honesty, I’m not sure a load cell is needed when you have a mod like this. It basically does the same thing by requiring your to apply progressive pressure on the brake pedal which helps with consistency during threshold braking.

I have them installed in my main rig now, inverted and will be running them for the upcoming 12 hours of Sebring in iRacing.

I would like to see Thrustmaster come out with a stand alone USB connector so anyone could use these on the PC. Lets say you have a Logitech DFGT or G27, these would make for a good upgrade. They’re also competitively priced at about $150 here in the states. I’d also like them to offer the conical brake mod as a modification or upgrade to those that have a T500 RS set of pedals as it’s my preference over the spring mod. 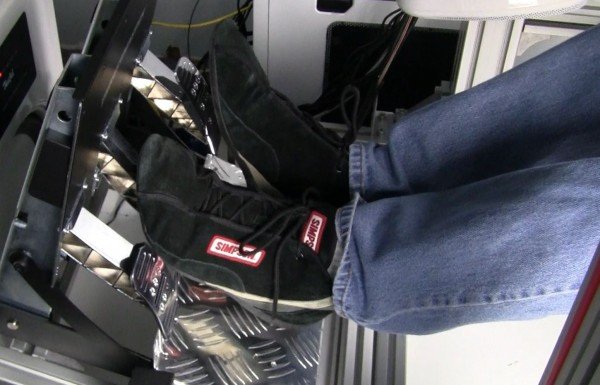 I would highly recommend these to anyone looking for an upgrade to their T300 RS or TX Racing wheel. I personally think that if you have a set of these pedals, you don’t need much more. A high end set of pedals are cool, but I honestly can get the job done and am just as fast, or maybe faster with these.