Wil ‘’Mayaman’’ Tosado’s mind blowing Porsche motion rig is the result of the last two and a half years of his life. He painstakingly and lovingly created his motion simulator in a room of his home which is dedicated to all things Porsche!

Like most people that frequent the many online sim racing forums, occasionally you come across someone that strikes a chord with you. You exchange PM’s, get to know each other and share your ideas, thoughts and interests.

That is how it went for Wil and I. I have known Wil or ‘’Mayaman’’ as many sim racers will know him by, for a number of years now and we have always had a good rapport and can speak for hours on the subject of sim racing and especially sim racing hardware and immersion.

The following is a chronicle covering Wil’s beginnings in sim racing, right up to his quest for the ultimate immersive experience. Which, by the way, is an ongoing process! 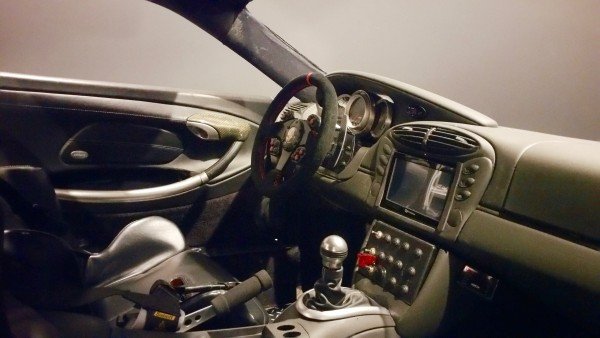 Wil first became interested in sim racing back in 1995, playing SEGA’s great arcade racer, Virtual Racing. He spent every weekend for two years with his friends playing that game in a local arcade. This was the beginning, the start of his love of sim racing, even though it may not have been a true sim. Then progressing on to SEGA’s F355 triple monitor racer. These initial experiences with his new hobby formed the basis of what would later become his main goal. This was to create the ultimate immersive sim racing experience by utilising the best currently available equipment and technologies.

Starting to sim race a little more seriously in 2000, like most sim racers, before arriving at his first major purchase, Wil had gone through several variations of desk mounted and living room setups. In 2010, he decided to purchase a VR3 rig for what was then a substantial sum. During the construction of the VR3, while enjoying the build, he decided to go down that never ending path we call modding.

After that first mod, he also discovered projection and multi-projection, to say he was bitten by the projection bug is an understatement! He immediately put his monitors up for sale and began his quest for the ultimate multi-projection solution. Some of these initial attempts at projection can be found in the ISRTV forums.

I began with PC and also Xbox 360 and GT5, both of which supported triple displays. I was hooked big time. The immersion over triple monitors was enormous. True to life scale, no more bezels, no more driving as if I was looking through the bars of a jail cell, so to speak.  🙂

Moving forward with his search for the ultimate sim racing setup, a first foray into motion rigs saw Wil picking up a rare D-Box 230 2 actuator rear mount system. Suffice to say, he was very impressed with it! So impressed in fact, that the decision was made to hunt down a second set of actuators. With some help from D-Box in re-programming them, he could now create a four actuator system.

Back on the projection side of things, Wil continued to use flat panel projection up until 2012. This was until he caught sight of some videos from a guy in Singapore who was using Fly Elise, which uses software named ‘’Immersive Display Pro.’’ Without this software and the accompanying warping assistant ‘’Immersive Calibration Pro’’ the project as it stands today would not be possible.

Continuing on from this, he then persisted with using both the VR3 and additional Human Racing chassis with curved projection, until yet another video grabbed his attention. This time it was a video of a full-sized Ferrari race simulator mounted to a Hexapod platform produced by the Dutch company, Cruden, which was set up in Dubai.

Suitably impressed as he was, Wil thought to himself that the same results could be achieved with the less is more approach. With all the accrued knowledge he had built up in the field of curved projection, the effect could be easily replicated. The trickier part would be devising an efficient way to construct the two person cockpit that would now consume his thoughts. 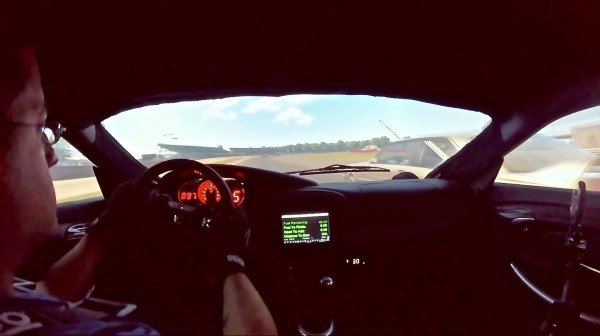 Jumping ahead to around two and a half years ago, Wil bought a home which finally gave him the space to create a dedicated sim racing room. This was all the motivation needed to make a start on drawing up the plans to create his ultimate racing simulator!

Unfortunately, life seems to have a knack of getting in the way of the best laid plans. Wil’s health situation meant that the project had to take a back seat for the time being. With several delays, some short and some quite lengthy, he has been able to continue on and get his project to a stage that he is happy with.

The first cockpit mock-up / prototype was constructed from cardboard and was subsequently positioned in front of his existing curved screen setup. With this came the realisation that he had hit upon the right formula for what he was trying to achieve! The next step was to order some 80/20 profile, hardware and the necessary tools for the project.

The next two years would be taken up with a mixture of progress and setbacks. At the end of this period, what Will has achieved is something quite remarkable. All that you see was achieved without much help from any major company or sponsors and is a true testament to his drive and perseverance in realising his goal of the ultimate immersive racing simulator. 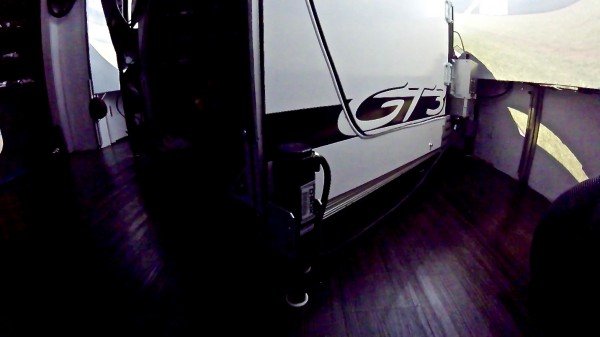 For those of us old enough to remember the film ‘’Risky Business’’ – the chase scene in the Porsche 928S is what captured Wil’s imagination and began his fascination with the German car maker. At the time, he had no concept of what Porsche was, but came to develop a deep appreciation for what are some of the most highly engineered cars in the world!

The form following function philosophy really appealed to me. Most kids had a poster of the Countach on their wall. I had a four foot wide poster of the 959. To this day, it is the epitome of what a car should be in my mind’s eye. 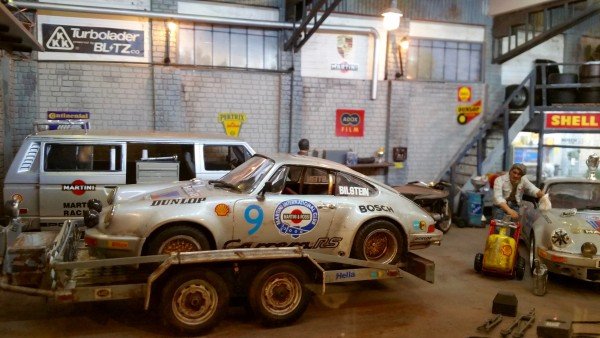 The build took approximately two years to arrive at this stage and did not move out of ‘’Alpha’’ status until four months ago, when it progressed to ‘’Beta’’ which is where it exists today as an advanced prototype. Wil thinks that there is still quite a bit of work to be done – in his words, ‘’rough around the edges’’ and still evolving. The most difficult aspect of the project was the multiple projection, which required a lot of warp adjustment as the simulator is a true two seater!

Wil is not just blowing his own horn when he states that his simulator is the most realistic racing simulator in private hands, regardless of price or platform! His reasons for stating this are not based in ego, conceitedness or money and time he has invested in his project, rather in the care and attention to detail he has lavished on it.

With the combination of several technologies, the resulting simulator can deliver close to reality experiences. The one true goal all along was to make the simulator as real as possible within the constrictions of Wil’s budget and expertise.

In the time Wil has had the simulator up and running, he has had several people from sim racers to non-sim racers take their places in it. The reactions have been very positive. From inside the cockpit, peering out at the world created by Assetto Corsa, you cannot tell that you are not actually sitting in a real Porsche 996!

Assetto Corsa also happens to be Wil’s exclusive software choice for his simulator and I am very happy to have helped him in a small way when it came to adjusting Assetto Corsa to give him what he needed in terms of his final projected image. In fact, the computer he uses for his Porsche motion rig only has Assetto Corsa installed on it!

As with all sim racing projects, they are never truly finished. Wil is now using the feedback from people who have driven and been driven in it to improve upon areas he thinks can still be tweaked.

Single handily producing a life-sized Porsche cockpit in a room of his home, with little outside help, it really is a jaw-dropping achievement. Wil’s Porsche 996 GT3 simulator is inspiring to anyone who has ever fantasised about having such a rig of their own and definite proof that it can be done! 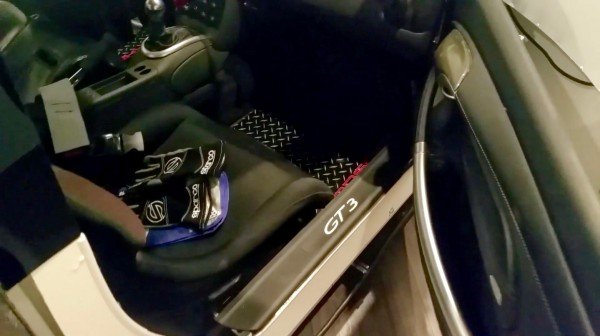 Real Porsche 996 interior panels, dashboard, GT3 bits and bobs, etc, all from a salvaged 996. The Skeleton is of my own design. It consists of 8020 components with other various construction to mimic the true dimensions of the 996 GT3.

It also has a windshield with GT3 wiper to add more depth to the simulator when looking out from the cockpit.

Great care was taken to make sure the dimensions from within the cockpit were accurate. Mounting the hardware took quite a bit of planning. But from inside the simulator you cannot tell you’re not in a real vehicle. The body panels are also of my own design and fabrication. They are obviously quite rough but this is after all a prototype. Let’s be honest, any race car needs       some “ugly” in it, right? 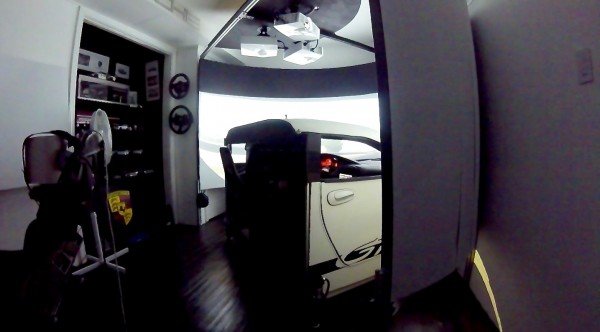 The screen system was purchased from a distributor in New Zealand. I modded he original system to suit my needs as much of the hardware provided was either not going to fit or was not correct for my application.

I spent about 3 months building screen supports, calculating projector distance and manufacturing a mounting system, and then working out screen height in accordance with cockpit height so I could make sure all the driver and passenger see from the cockpit is game scenery. There is obviously no

The cockpit isn’t just about motion or tactile, both provided by the Dbox. It also has a full suite of fully functional gauges conveying all pertinent information needed to the driver. In addition there is a 7 inch screen in the Nav position that has telemetry software by Z1 that conveys things such as LAP TIMES, FUEL, PIT MESSAGES, COMPETITOR POSITIONS, TRACK MAP, among others, giving the driver greater awareness of race situation.

Space required for the Porsche 996 cockpit and curved projection screen is 9 feet or 2,7 metres x 12 feet or 3,6 metres with the ceiling height being 8 feet or 2,4 metres.