S*** gets real on Monday.  After the Oculus Rift CV1 pre-order frenzy in January, HTC and Steam are ready to jump into the ring with the Vive.  Starting at 10 am Eastern time on Monday (2/29) you can pre-order the other virtual reality (VR) headset for a cool $799.  Pre-orders start shipping in early April.

For those keeping score at home, that puts the Vive $200 more than the Rift.  Unlike the Rift though, the Vive comes with two of the – made for VR – controllers and room scale movement sensors that track were in the room you’re at.  With that said, both have little to no impact on what we care about, sim racing, since we’re sitting and using a wheel.

A more useful feature maybe Vive’s integration of SteamVR.  Why is this important?  Because it’s Steam, and as you may have noticed, PC gaming has all but transformed into Steam gaming.  Support is key.

Another feature that’s “cute” is the integration of Vive Phone Services, which allows you to receive and respond to calls and texts, and play with your calendar all in the headset.  HTC clearly doesn’t want you to forget they still make phones.

One thing that the Vive does have in common with the Rift is the relative secrecy of it’s internals.  While there’s been plenty of speculation and a few confirmations here-and-there – such as the OLED screen of the Rift – no hard specs have been released for either headset.  Ah, the thrill of being an early adapter. 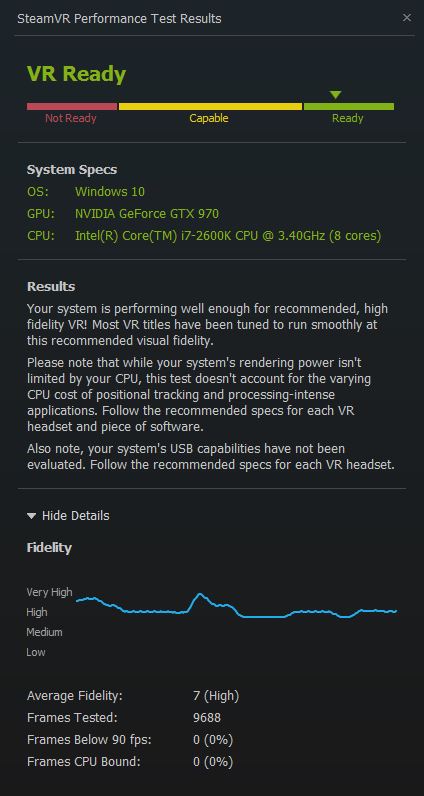 A major question we have concerning the Vive is developer support.  While the Vive team says that they have plenty of headsets out to developers, the rumor on the street is they’re not nearly as prevalent as the Rifts.  In fact, we asked iRacing President Tony Gardner on the February 24th edition of This Week Inside Sim Racing whether or not they had a CV1 Rift and/or Vive and he gave a resounding, “yes” to the Rift and a, “not sure” to the Vive.

Obviously, any new piece of hardware is useless without support.  Of course with time, we would expect all major headsets to be supported, it just may not be Day 1.

HTC/Steam haven’t released any minimum or preferred PC specs, but they have released this SteamVR Performance Test to find out if your PC is VR Ready.  Somewhat surprisingly, my PC – specs here – flew through the test with flying colors (right).  I say surprisingly because according to Oculus, my PC just meets the minimum specs for the Rift, and we all know nothing runs great at minimum specs.

So is the Vive more hardware friendly than the Rift?  Guess we’ll know soon enough.

Any early adopters in the room?