Virtual Reality is fast becoming the way forward in sim racing! Computer manufacturers, Microsoft, are drawing closer to releasing their own branded Virtual Reality headsets! Yesterday they released more details regarding the required minimum specs for the upcoming headsets. Microsoft is creating their own platform within the Windows 10 environment, which is based on Windows Holographic. This environment was actually developed to drive Microsoft’s HoloLens augmented reality headset. At a recent event held last October, Microsoft announced the pricing of their new VR headsets for Windows 10 will start at around $300. 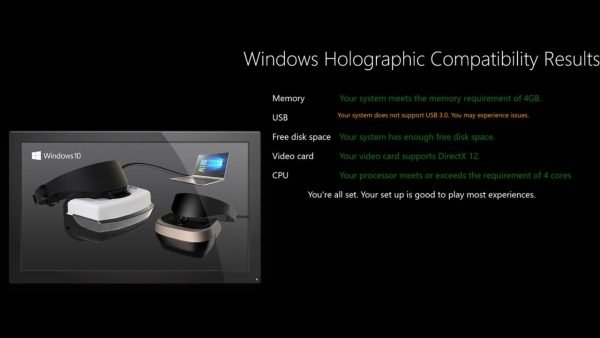 The required minimum specs when compared to the big two seem relatively humble. They were confirmed yesterday thanks to the latest beta builds of Windows 10. The new Beta build contains the Windows Holographic First Run application. This app basically does what Oculus and HTC apps do, it runs a diagnostic to determine if your computer’s hardware is VR compatible. Once complete, a window detailing your system’s (in)compatibility is shown on-screen and alerts you to areas that may need updating.

If the renderings are accurate, aesthetically speaking, they could use a bit of a polish before being released to the market. On the other hand, when it is on your head you will not see it anyway. Microsoft is intending on working with third-party manufacturers to launch VR headsets for Windows 10 at a low price point.

The bar seems quite low and most relatively new Windows 10 machines should be capable of supporting the new Windows VR headsets. It remains to be seen if the new platform will be able to compete with Oculus and Vive, as they run on much higher specs. The projected price point of $300.00 makes them attractive. Microsoft has stated that more headset oriented specs will be released this December. Until then, we can only speculate as to how they may stack up to the competition. We will keep you updated as more news is available.