The frame looks to be adjustable for several parameters, although on inspection of the image here below, the wheel deck does not indicate angle adjustability for mounting different wheelbases. The seat is said to be of ”automotive quality.” The simulator design should allow for the placement of differing sim racing or flight control peripherals. There is also a triple screen stand constructed in the same style as the main simulator. What is definitely apparent is the number of companies entering the sim racing market, from a marketing standpoint it makes sense to become involved in the business of sim racing hardware. eSports is growing exponentially and is fast becoming a billion dollar industry!

As reported on SlashGear, Velocity Micro used the 2017 Consumer Electronics Show in Las Vegas as the backdrop to announce the new RennSeat Pro as part of their CES lineup. CEO of Velocity Micro, Randy Copeland, states: “Building a racing cockpit was a natural progression and an extension of the company’s founding philosophy.”  The company is promoting that their new simulator is for ‘‘hard-core immersive gaming,” and enthusiasts alike. 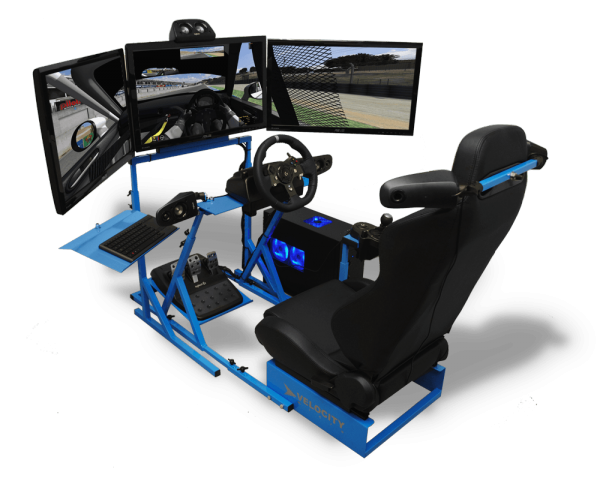 Providing purchasers with a comprehensive turnkey solution, Velocity Micro is stating that the simulator will be ready for immediate use once unpacked. The RennSeat Pro includes the triple screen stand and all the required peripherals to go gaming. However, there is no official information on exactly what these peripherals may be. In addition to the announcement of the new simulator, the computer maker has also shown some of their newest desktop computers featuring the new Intel Kaby Lake processors and other various tech products for gamers. The company has not given a specific release date or retail price for the simulator. They did say that it would be available for purchase sometime in January.