It was at this year’s E3 were Thrustmaster announced its partnership with Sparco and showcased its new Xbox One flagship wheel – The TS-XW racer. Now, a release date and the specs have been confirmed!

That is what it is all about. Thrustmaster has produced a 1:1 scale replica of the Sparco P310 Competition Mod 12.2 inch / 31 cm rim, which is positioned as an all-rounder in regards to what cars and racing series it suits, e.g. GT, F1, NASCAR, Indy, road racing.

It features a metal-crafted faceplate and wrapping in genuine suede leather. 5 inch / 13 cm tall, all-metal, adjustable wheel-mounted paddle shifters are also part of the package. As expected, it is also Thrustmaster ecosystem-ready, meaning that it can be interchanged with other Thrustmaster rims. Whether it will be separately available is still unclear.

For controls, 14 action buttons and 1 directional pad with a push button have been mounted to the rim. Wheel rotation can be adjusted from 270° to 1080°.

The base is identical with the one of the TS-PC Racer. That means that it features a brushless force feedback motor, extensive cooling and the ability to perform even after several hours of racing.

A set of pedals is also included with the TS-XW Racer. They are reminiscent of the regular T3PA pedals and feature metal pedal plates as well as a full-metal internal structure. The pedals plates can be adjusted and the conical brake mod is included too. 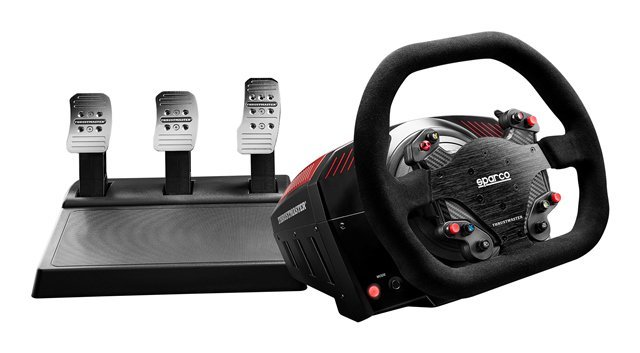 Release date is September 14, 2017 and the TS-XW Racer will be available at a suggested retail price of USD $649.99, prices in your region may vary. It supports Windows PC’s and the Xbox One and you can expect an Inside Sim Racing review very #soon.