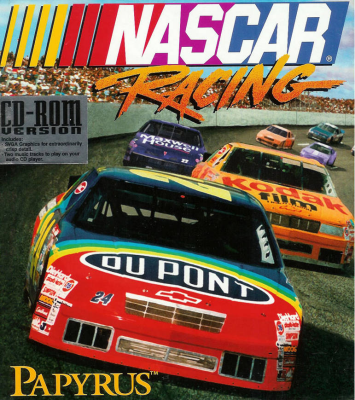 In this week’s Throwback Thursday, we take a look at Papyrus’ first NASCAR title. NASCAR Racing was released in 1994, and was one of the first racing sims to feature online gameplay.

You were able to race up to 38 other cars (32 on short tracks), with over 25 licensed NASCAR drivers. However, drivers such as Dale Earnhardt, Darrell Waltrip, Bill Elliot, and Dale Jarrett are absent. NASCAR Racing was the first stock car sim to feature real sponsors on the cars.

Nine tracks were included in release, with a 1995 track expansion pack adding seven tracks to the sim. Daytona and Indianapolis were not included in the game (Papyrus developed a version of Daytona, which was used in an exclusive version for the Daytona USA museum). You could compete in a quick race, but also scale up to an abbreviated NASCAR Winston Cup season.

Damage was realistically portrayed in the game, including extended repairs (usually one minute or more) and totaled cars. Engines can blow from excessive damage, overrevving, or overheating. Damaged cars can also affect performance. At release, cars weren’t getting damaged as much as they should, with wall-riding being common, so Papyrus issued a patch that upped the sensitivity.

Car setup also made an impact in the game, with a variety of options to tweak your car. Realistic tire wear could be analyzed to make corresponding adjustments to camber, tire pressures, and more.

NASCAR Racing was one of the first sims to be able to be played online as well, with Papyrus’ Hawaii service. However, it could be quite pricey, with you having to pay long distance fees to have your internet connect to Watertown, MA for the service.

A few mods were developed for NASCAR Racing as well, including additional cars and tracks. An included paintkit served for additional liveries to be created.

NASCAR Racing paved the way for modern racing sims, with many additions to set it apart from the rest. If you want to check it out, I’ve commonly found them at thrift stores for under $5, which is a small price to pay for a great sim racing history lesson!

Do you guys have any memories of racing Papyrus’ first NASCAR Sim? How about racing it online?

Darin’s Note: Think iRacing is expensive? I knew a guy that racked up over $50,000 on his phone bill playing NASCAR Racing online!