It’s time for my first look at the SimXperience Stage 4 Simulator.  It arrived in a total of ten different boxes weighing about 400lbs. I’m going to start by going over what’s included in these 10 boxes and then tell you my initial thought on the Stage 4.

The Stage one makes up the motion seat base. It comes with two actuators a motion control unit called the SX4000 as well as a high gloss black powder coated frame that makes up most of the rear portion of the simulator. Two heavy duty main rails are connected with two more heavy duty cross members with one of them at the rear and one in the middle. The one in the middle is connected to an automotive style universal joint that then connects to the seat base that has a riser that then connects to the two actuators. The two actuators then connect to a rear bar that sits a few inches above the rear cross member with two rubber bushings that act as dampers. 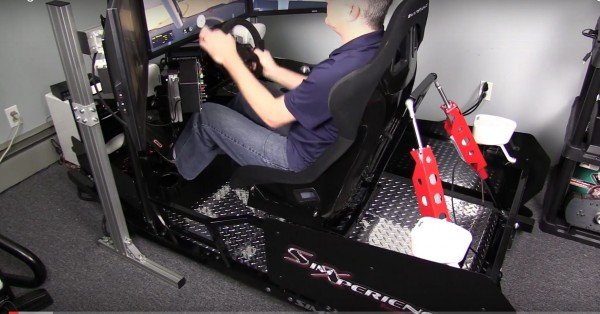 The main rails are hollow and allow you to route the control boxes power and USB cables. They’re also perfect for routing your rear speaker wires and buttkicker wires as well.

Next up is the Stage 2 and it makes up the front end of the simulator. Two more longer main rails connect to the two from the stage one and then taper in at about a 30 degree angle and connect to a front cross member section where the pedals would eventually be housed. Then the steering column section is boxed in with more heavy duty steal to create the front end.

There’s also a large pedal plate that sits in the footwell and is secured with two knobs and allows you to slide it forward or back to accommodate drivers from 5’5″ up to at least 6’6″ tall. It comes pre-drilled for Logitech or Thrustmaster pedal sets. I ended up drilling it for the Fanatec Clubsport V3 pedals I’ve been using.

A keyboard tray that can be mounted on the left or right side of the chassis is also included and of course a wheel deck. The wheel deck can telescope forward or back to accommodate different heights and it can tilt as well.

Now on to the Stage 3 portion of the simulator and it makes up the rear traction loss module. The entire stage 1 & 2 simulator sits on top of the Stage 3 module. Also made of 2″ tube steel, the traction loss module consists of a long middle section that attaches to two cross members at the front and rear of the simulator. At the front, the simulator rests on the cross member via a large circular pin that acts as the pivot point for the entire chassis. At the back, the chassis sits on the rear cross member that has two heavy duty poly plates. Under the rear of the chassis, two rollers make contact with those poly plates to allow the rear to move left and right. At the center of the chassis, an actuator attaches to the long middle section and the side of the chassis to create the rear traction loss movement. The actuator then plugs in to the same SX4000 that the two motion seat base actuators are powered by.

Finally the stage 4 module adds additional rigidity and appearance optimizations. You get the side rails that make it look more like a car chassis than a sim rig. It also includes some additional high gloss black panels and a rear bar that has two speaker mounts. It also includes a mouse tray.

Also included in my Stage 4 was the optional SimXperience seat and diamond plate floor boards.

Installation of the entire stage 4 takes about 25 hours. It comes with 70 pages or so that walks you through it in detail.  You’re going to need a pretty decent set of tools including standard and metric to assemble and attach a wide variety of hardware.

So there’s what you get if you were to order a full Stage 4 and it goes for $5751.00. Then the seat is an additional $236 and the diamond plate floor board setup goes for $690 for a grand total of $6677. I also needed the optional AccuForce angled mounting brackets for the AccuForce Pro to sit in the proper driving position. It goes for an additional $44.99 and if you have an AccuForce, you’ll need it.

For my setup, I used my extrusion tubing triple monitor stand that was sent to me by the guys at JCL to be faster and it just fit. If you are going to get a stand like this, you’ll need the middle or main cross section to be at least 42″ wide to allow the rear traction loss movement and fit over the simulator.

Now on to what I think about the Stage 4 so far. First up, this is the highest quality chassis I’ve ever had here in the studio. From the steel tubing to the high gloss high quality powder coating it’s built like a tank and looks awesome.

The seating position and adjust-ability of the wheel and pedal deck puts me in a great driving position. I ran the 12 hours of Sebring last weekend and ran a double fuel stint and was totally comfortable in it. Another great thing about the adjust-ability is that it can quickly accommodate my 6’4″ frame and Johns 5’6″ frame.

The driving experience has been second to none in regards to motion systems that I’ve tried. I’ve tried Dbox setups, SimCraft swing type systems a blue tiger, the Next Level seat platform and Frex seat movers and none of them have given me the seat of the pants that the seat actuators and rear traction loss have provided. Feeling the rear end actually kick out has helped me save the car numerous times so far. I’ve mainly driven it with iRacing but plan to try it out with every title on the market.

In regards to software integration, the SimXperience Sim Commander software was plug and play and easy to adjust and fine tune. Once the sim was built, I was driving within minutes of plugging everything in. The default profiles provide a lot of movement but I quickly came up with a solid profile to run my Sebring stints.

So, that’s going to wrap up my first look at the SimXperience Stage 4. I wanted to give you guys a glimpse into what you get with a Stage 4, how long it took to build and what my initial thoughts on it are. Definitely will be covering this setup a lot more in the near future with test drives and a final review.

To read more about the stage 4 or to purchase one yourself, head over to SimXperience.com and then click on Products. There you can check out the Stage 1 through Stage 4 setups and they are modular. So you could start with a Stage 1 and work your way up to a Stage 4 over time. They also have some great DIY options available as well to adapt it to your current sim racing setup. If you have any questions about the Stage 4 or Sim Commander setup, email me at darin@isrtv.com and I’d be happy to help you and answer any questions.

Hope you enjoyed my first look. I would like to thank the guys at SimXperience for sending this to me and allowing me to do these videos and have one of, if not the best sim racing experience I’ve ever had.