Under the guise of their ongoing 3PA program, Image Space Incorporated, the studio behind rFactor 2, present a third party version of Suzuka (which for licensing purposes is dubbed the Matsusaka Circuit) and it is now available for download on the Steam Workshop!

In the real world, the Suzuka circuit, located in the Suzuka Mie Prefecture, Japan, was opened in 1962 and is one of only a handful of circuits in the world which have a unique figure eight layout! This circuit has seen plenty of motor racing history and was the scene of  perhaps some of the greatest and most controversial battles between drivers of the modern era.

Please do scroll down for more information regarding the five varying layouts and features of this release, as well as the official press statement from ISI and our screenshot gallery.

Produced by third-party content producer “woochoo” (maker of Longford), we present Matsusaka Circuit, a figure-8 track with some of the finest sweeping turns in all of racing.

Matsusaka is popular Japanese circuit based on a figure-8 layout. Opened in the 1960s, it hosts top level open-wheel and GT events, and slower cars can be accommodated on two shorter alternate layouts. Minor layout revisions in its history have added three chicanes, and all currently possible layout variations are available in-game. 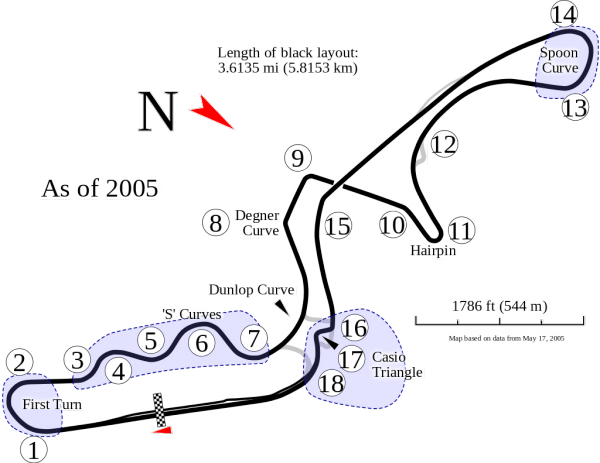 International – 3.609 mile or 5.81 km roadcourse
The main figure-8 circuit as used for GT endurance and sprint events, with some variations in trackside details.

International (West) – 3.61 mile or 5.81 km roadcourse
The base figure-8 circuit, but adding a chicane after the hairpin in the Western half of the circuit.

Motorcycle – 3.62 mile or 5.82 km roadcourse
The base figure-8 circuit as used for motorcycle racing, which uses the Western chicane, and the tight final chicane.

East – 1.391 mile or 2.24 km roadcourse
A shortened layout using only the Eastern half of the circuit, joined by a tricky variable camber final turn.

West (West Chicane) – 2.16 mile or 3.47 km roadcourse
The West layout with the addition of the Western Chicane after the hairpin.