Studio 397 has revived the rFactor 2 development blog and gives some insight on why its tyre model was partially incorrect  for the last couple of years.

Of course, incorrect is a strong phrasing, but some explanation will help.

Until now, Michael Borda, physics wizard at Studio 397, explains, rFactor 2’s centrifugal tyre forces were calculated in a so-called “quasi-static model”, where forces are more or less generalised to save calculations of individual parts.

However, as Studio 397 came to discover, this is inaccurate and can have quite significant effects, since the distribution of forces in the contact patch, the part of the tyre that is actually touching the road surface at a given moment, can vary significantly.

At first, the studio behind rFactor 2 suspected that something was wrong with the tyre data it was provided with, which, sadly, can happen as Niels Heusinkveld explains here.

After getting their hands on a definitely correct piece of tyre data, where multiple loads were actually measured and not copied or scaled, the developers came to the realisation that something was not right with their tyre model.

A fix was found quickly though, and now, centrifugal tyre forces are being calculated “localised” in rFactor 2’s QSA (Qasi-Static Analysis) physics model. 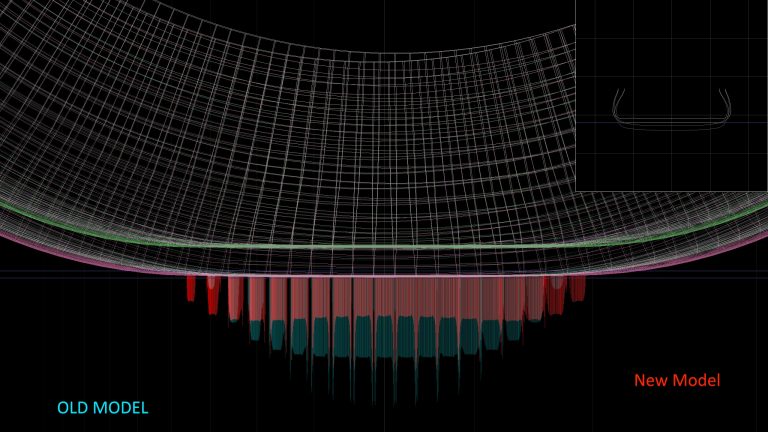 Notice, how the contact patches’ sizes vary between the old and the new model.

To put this into perspective, when driving, tyres are now less speed sensitive, resulting in a longer contact patch at higher (rotational) speeds and loads, which then, in general, will lead to a little more heat .

Michael Borla describes it as the biggest change in rFactor 2 since the introduction of the contact patch model. He continues that cars will now feel “more stable” and “less slidey” in high-speed corners. An issue which was especially apparent with the Radical SR3-RSX.

For the full details, you can head over here.

With the latest release of rFactor 2, the updated QSA model has been included!