The Red Bull F1 racing team’s ex-driver, David Coulthard, was recently asked to jump into the official factory simulator and set his best time for a new challenge series entitled the Red Bull Racing Simulator Challenge! A select group of well known people will be invited to take their place in the simulator to see if they can topple Coulthard’s time. David Coulthard’s best time in the simulator at the Red Bull Ring in Austria was a 1:17.960 lap of the circuit. This is the standard everyone will have to beat in order to win the challenge. 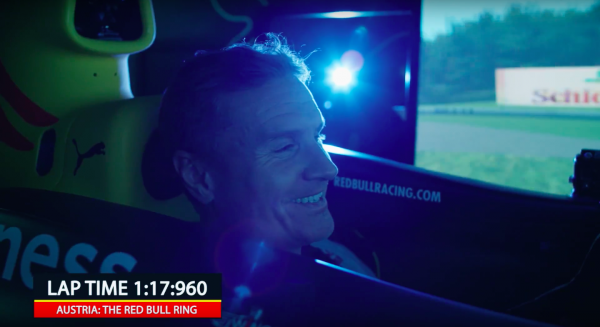 The first person to take their place in the factory simulator is none other than Adrian Newey, chief designer of most of the team’s race winning F1 cars! Adrian actually gets to set a time in a car of his own creation. I would say he does have an advantage, as he has experience in real world racing cars, even participating in the 2007 running of the 24 hours of Le Mans, becoming part of the driver line-up in the AF Corse Ferrari F430. Newey and his co-drivers Ben Aucott and Joe Macari managed to finish 22nd outright and fourth in class that year.

With the astronomical costs of real world F1 and an almost total ban on in-season testing, most drivers from the top F1 teams spend time in their factory simulators in order to learn a new circuit, practice their race starts and test new data gleaned from the cars during a race weekend. The importance of factory simulators in F1 is not to be underestimated and although they vary wildly in their approaches in terms of hardware and software, most teams find them invaluable for the above mentioned reasons. This also is a way to keep costs down when everything else in the sport is spiralling ever higher.

Some of us sim racers may scoff at what most F1 teams use with regards to their simulator set-ups and software. On the other hand, some of the best engineers and motorsport brains are involved with what has become an integral part of the F1 industry. I know I would not pass up the opportunity to try a factory simulator on for size and see for myself just how close they are to how most of us sim race!