Welcome to another Test Drive Tuesday.  No, it isn’t Tuesday, and Yes, we did already do one this week.  But I just couldn’t help myself because this was yet another opportunity to try something new.  This week Assetto Corsa released the 2nd patch to their new sim.  With that patch came 3 new cars and 2 new tracks that we have talked about here on our site.  So I decided to pick one of each for my Test Drive Tuesday  but to make it even better I was able to use the new Thrustmaster Tx Racing wheel Ferrari 458 Italia edition on the PC.  In this write up I will talk a little about the car, the track and the wheel and what the entire combination was like to drive. 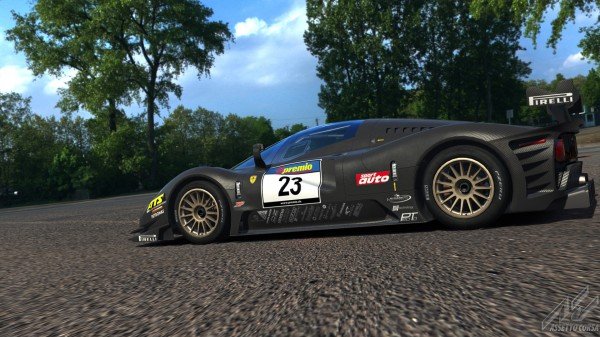 Lets start off with the car and the usual focus of a Test Drive Tuesday.  The P4/5 is a very rare car to say the least.  It is actually a one of a kind car that started off as an Enzo Ferrari and then became what it is today.  It features a 450 horsepower V12 engine, that actual is the same type they mount into the Enzo.  But this chassis is a real work of art.  The car a a certain resemblance to the GTP cars of old but is very much a modern race car.  The amount of down force actually makes the amount of horsepower feel a little bit lower and turns this car into one of the most tame Ferrari’s that I have ever driven in a sim.  It does have the traditional sound of a V12 Ferrari and when pushed can actually lay down some blistering lap times in a graceful controlled manor.  I found myself at times turning in with the wheel and then snapping the throttle off in order to make the car turn in more aggressively.  On exit the car can kick out the rear a little if over driven but was a little tight on corner exit as well.  Luckily the 450 horsepower do give you good recovery from missed corners.  The braking on the car is outstanding and can really be pushed to the limits and is another feature that makes this a pretty easy car to drive. 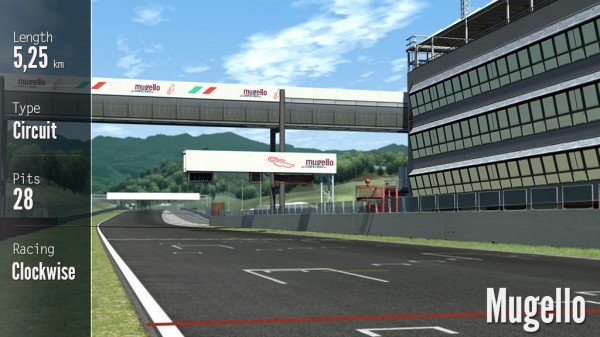 Mugello has become on of my favorite tracks to drive and since it is such an exclusive track I feel somewhat privileged to drive it.  The track is owned by Ferrari and is used by them for testing.  There have also been some rare occasions that other F1 teams have been able to use the track as well.  If I were going to build a track for testing cars it would look something like Mugello.  It really has a little of everything to offer and that is what makes it one of my favorite tracks to drive.  There are a few 180 degree turns, one that is uphill and turning right, and another that is a downhill left hander, each with the camber pushing you off the track.  There are a series of chicanes each with varying distance between the 2 turns, this really tests the balance and sway of the car.  There is also a straight away long enough to test almost any cars capability for outright speed.  Yes Mugello is a great track and a wonderful challenge at the same time. 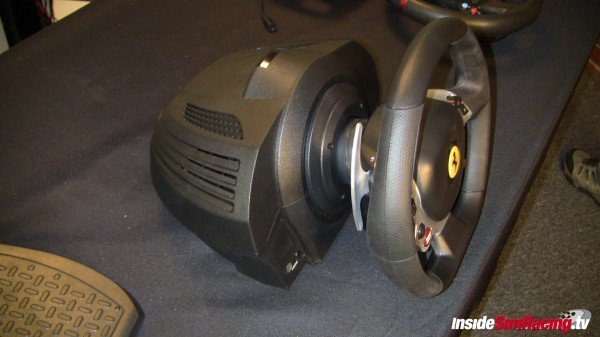 In the weeks Test Drive Tuesday we got to try out something different and talk about it a little here today.  And that is the new Thrustmaster TX Racing Wheel 458 Italia Edition.  We will be doing a full review on this wheel coming soon but I do want to talk a little bit about what it was like to drive it.  The TX is an extremely smooth turning wheel that transmits the Force Feedback very well.  I was immediately turning blistering laps in total comfort using this wheel and coming from a T500 had no adjustment period at all.  I could feel the rumble strips through a strong vibration within the motor.  When putting 2 wheels off the track I would feel the pull of the off road terrain in the wheel as well.  But most important was when going through the chicanes of Mugello and feeling the weight transfer of the car it came through the wheel just right.   This wheel has tremendous potential.  The pedals are not in the same league as the T500 set but as far as 2 pedal plastic set go these are my favorite.  They are springs and pots only, but offered enough tension to keep me feeling like I was in a car of sorts.  I am very interested to see how my lap times on this wheel compare to the T500 but that will have to wait for the review.