Marcel Pfister has provided us with some entertaining and awesome mixed reality videos over the past few months. Today, mixed reality goes off-road in Dirt Rally and to make things even more realistic, Marcel takes to a night-time rally stage! The footage of driving at night through the Welsh bush looks so real you could easily be fooled into thinking you are watching real in-car video of an actual rally!

Using his Oculus CV1 and the now familiar green screen techniques, this night-time video really conveys the atmosphere of the night stage and just how claustrophobic it can be whilst throwing a rally car around a forest road illuminated only by the car’s strong driving lights. I really have to marvel at just how realistic the experience appears in this video and it definitely makes me want to try some night rallying for myself! VR is quickly cementing itself as one of the most immersive ways to sim race! 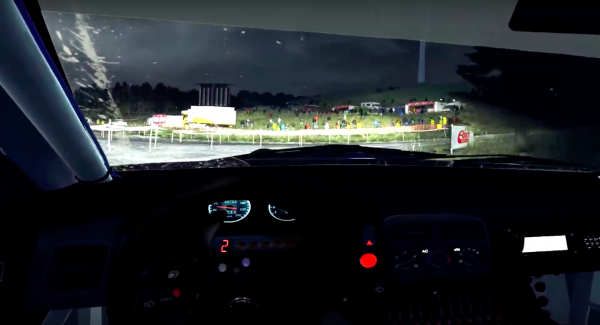 Marcel lists his equipment specs and techniques in most of his videos, so for all of you that are interested in how he achieves these great results, here are his specs and descriptions.

Marcel’s description of mixed reality:
It´s a way to record and show gameplay to serve a better understanding of how it feels to use Virtual Reality. It uses a greenscreen to later blend out the room you are playing in and instead blending in the virtual environment life or in video editing. So it´s only a way to show to the viewers, while playing i can´t see my wheel and real hands. So it´s not like Augmented Reality, which will maybe come in a few years and will look similar.

With VR support for Dirt Rally being introduced last month via a huge 10 gb update, the game has joined the growing ranks of VR supported titles and is helping to introduce VR technology to many more sim racing enthousiasts around the world!