To be fair, we are a little late to the party here, but three days ago, iRacing previewed its recreation of the Belle Isle Street Circuit on Facebook, announcing a potential June release!

Which One Was Belle Isle Again? 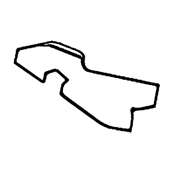 Located on Belle Isle by Detroit, Michigan, the Belle Isle Street Circuit/ or Raceway at Belle Isle Park, whatever you want to call it, it goes by many names, has been regular host to the Detroit IndyCar Grand Prix.

However, it has only been doing so since 2007, and even two years in-between had to be skipped due to the financial crisis preventing local car manufacturers from providing enough support.

Since 2014, the IMSA Championship has also been a regular visitor.

As it is not a permanent circuit, space is rather limited, and as you may notice from the onboard video below, there is really no margin for errors.

iRacing hopes to finish the track in time for a June release, and the released screenshots do already look quite promising. Check them out below!