The team at iRacing are dedicated to sim racing realism, especially when it comes to their title’s content! One of the details iRacing concentrates on is the aerodynamic behaviour and modelling of each vehicle. To this end, there is not an in-house wind tunnel available to go and test models of upcoming or existing vehicles in. For this reason, iRacing have been working with the Ohio based company, TotalSim, since 2011. The company is one of the world’s leaders in the field of (CFD), or computational fluid dynamics. The technique employs the use of numerical analysis and algorithms to analyze the interaction of liquids and gases (air, in the case of race cars) on the boundaries of hard surfaces (race car bodies, wings, wheels, etc).

Recently, iRacing renewed their partnership with TotalSim so that they may continue to have access to the most accurate aerodynamic data for use in their vehicle aero model. This seldom seen partnership within the sim racing industry reaffirms the commitment iRacing has in providing their members with the most accurately modelled physics and vehicle dynamics possible. Moving forward, iRacing will be pursuing a broader range of applications utilising CFD technology, which are not usually explored when testing conventional racing car aerodynamics.

With the upcoming release of iRacing’s DIRT and their plans to feature dirt track racing at Eldora and Williams Grove Speedways by the end of 2016, CFD is an essential part of its development as iRacing vehicle dynamicist Chris Lerch explains:

Along with drafting, dirt racing is right at the top of our list in CFD work. Dirt track cars operate at high yaw angles that are hard to test in the wind tunnel, making CFD a great fit for us in capturing the aerodynamics of something like a winged dirt sprint car.

Think of CFD as a virtual wind tunnel, it enables us to test the physical geometry of iRacing’s cars in a virtual manner, one particularly relevant to sim racing.

If you would like to find out more about the partnership between iRacing and TotalSim, David Phillips has posted an informative blog on the official iRacing blog page which can be found here. There, you can read in detail about iRacing’s use of CFD technology in their pursuit for ultimate realism in their popular PC sim racing title. 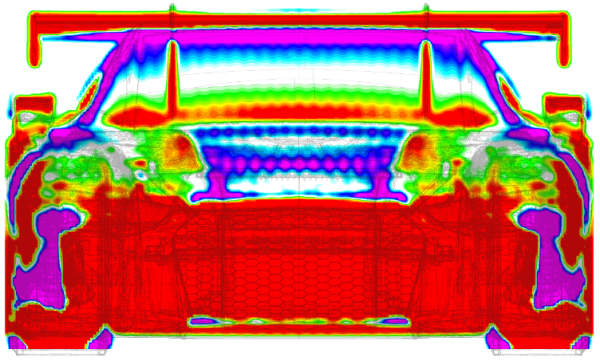