It seems that the second generation of virtual reality headsets is starting to make its way towards gamers around the world. However, the first example does not come from Oculus or HTC but from Pimax.

Actually, Pimax is not new to the industry. The company was already able to successfully deliver a 4K VR headset to customers. The goal of Pimax’ first VR headset was to remove the ever so popular screen door effect.

What is the 8K VR Headset all about?

The 8K VR headset is now also supposed to remove the “binocular” effect by increasing the field of view to 200 degrees, coming as close as never before to the FOV of the human eye. (Roughly 220 degrees)

The headset offers a resolution of 3840 x 2160 (4K) for each eye. Moreover, the headset is compatible with Oculus Home and SteamVR (store and tracking).

To counter the problems one not may but will encounter with the lacking performance of hardware, Pimax has implemented the so-called “Brainwarp” technology. Instead of displaying two images at the same time, images are alternated between the two eyes 150/ 180 times per second, making the computer only render one 4K image and not two.

If you want a headset, you can order yours now on Kickstarter, starting at $499 for the 8K and $349 for the 5K version. The only difference between the two lies in resolution. The 5K headset “only” displays 2560 x 1440 pixels per eye.

Whether this is actually worth considering, only hands-on time will tell. The first units are supposed to ship January next year.

Below you can find the specs and a comparison with the current two big boys in the VR industry. 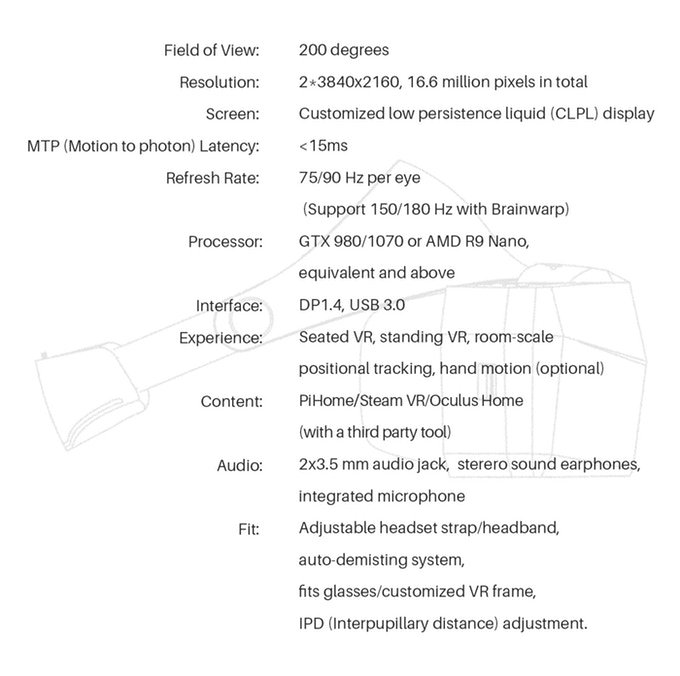