Woke up this morning to an email from the Kunos team saying that they’re long awaited, much hyped title, Assetto Corsa is available now on Steam. It’s actually an “Early Access” build which in reality is a beta or means that it’s still in development. So what do you get in this “Early Access” version of Assetto Corsa? Im going to put my first look or impressions together below for you. We’ll be going much more in depth as the title matures.

Eleven cars and five tracks that you can practice on or do “Time Attacks”. Per the press release we all saw a few days ago, this is what we were to expect.

The first build of Assetto Corsa includes the main structure of the game and 8 classes of cars for a total number of 11 vehicles, with the aim to guarantee just from the beginning the chance to enjoy the dynamic model of the game racing with different kind of vehicles.As part of the early access program, an update with new cars, tracks and features will be available every two weeks, adding new contents and improving the existing ones. All the vehicles and tracks will be released in a level of completion close to the final one, with the aim to deliver, starting by the first version, an enjoyable and satisfying simulation, featuring cars and tracks reproduced at their best, with the exception of unknown minor bugs that will be fixed and polished in time for Assetto Corsa 1.0.

My first impression was that it’s a little light on content for the $40, but as long as they stick to their promise of content every two weeks, it’s not so bad.  Eventually for the price of admission you get  35 cars, 16 vehicle classes, 11 circuits and 3 additional scenarios. Other extra contents will be added in 2014, in order to guarantee a long-life to this simulation.

Not sure what a “scenario” is yet..

Here’s what the current build gets you 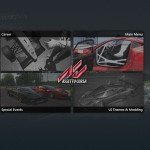 Practice and Challenges mode. Challenges consists of Hot Laps and Time Attacks as the accessible options under the main menu, There’s also a “Special Events” section that’s basically more time trials or hot lapping with certain cars at the tracks they’ve selected. Would be cool in this first build if they had a leaderboard of some kind going. Special Events are available through a different tab when you first boot up the game through the UI. Which by the way is very classy. One of the nicest User Interfaces in sim racing.

I ran one of the special events for my “Test Drive” above and you can see, it’s not much more than hot lapping.

The Time Attack, which is very arcade like where you try to make the check points before time runs out and you get points associated with it. Was actually a lot of fun and one of the only ways to really compete with the game right now. My best was 7000+ points with the BMW M3 GT2 car at Valluenga.

“Race and Online” are also grayed out followed by “Favorites”, which is a tab that shows whats you’ve been running.

You can currently view replays and all the in game adjustments for the game are fairly thorough. 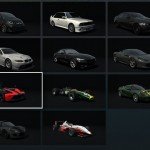 Mostly street cars with a few exceptions. One of the exceptions is the Formula Abarth and it’s similar to say a Star Mazda in regards to horsepower and weight. The other is the BMW GT2 car. My favorite so far, the KTM X Bow I’m driving above in the “Test Drive” segment at Magione. That thing is a blast ! The track is a lot of fun to drive it at too.  1:22.272 is my best lap, what can you run ? 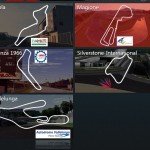 Only five available so far and they are,  Imola, Monza 1966, Magione, Vallengua and Silverstone International (not the full version.) 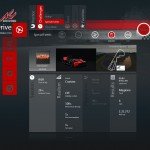 Easy to navigate and classy. With triple screens it opens on one screen on the desktop. 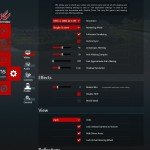 Great frame rates, triples running 5968×1080 – No ability to adjust field of view in cockpit.  All seem to be set good at the default. Good sense of speed.  Im running with a lot of eye candy turned off on my AMD 6 core with dual Nvidia 580 GTX cards.
Now let’s get to what Kunos is known for and that’s…

Do they live up to their reputation of having the best tire model in the industry??  Yes and then some ! Very easy to get a feel for. What you would expect from Kunos based on Netkar Pro.  The best tire feel around when it comes to that “rubber meets the road” feel.  The KTM , leaves me speechless really.. I can feel the body and tire sway, when that thing is going to break loose, I can feel it.  They’ve tied it all into the force feedback incredibly. It’s still early in my testing and I wanted to try everything, but I kept going back to that XBow.

Love the gravel sound when you come back on track. Engine note very good and the tire sounds are as well. Also some good brake squeal as well.

Some other notes about the title so far as I drove.

Don’t like the slow down feature when you go off track. Would prefer a warning to slow down myself.

No damage.. Would like to see some good physical damage. Turned the mechanical damage slider to 100% and didn’t see anything. Said to come in a future patch

No multiplayer, AI or damage yet which is a disappointment. I hope to see those features very quick for the $40 price tag. Especially as we approach the holidays and people may be home to do some sim racing.

Would like support for products like Sim Vibe and so far the Renovatio display I was using worked.

If you only have $40 to spend on a title for the rest of the year, you may want to look at iRacing, Game Stock Car 2013 or even rFactor 2 for something that’s more complete. Without damage, multiplayer, or AI, this is a $40 test drive or giant “Tech Demo” for us to all try out. Hopefully by the end of the year, we’ll see the promised updates and it’ll be more complete. Once it is, it should be well worth the price of admission.

That being said, if you want to test out the best tire models in the industry, or one of. Pick it up, and we can all wait for the rest of the content to arrive. At least we now have something to check out. I’d like to say it’s worth it, but there’s some great driving to be had for $40 in the other titles I mentioned as well without having to wait.

Modability.. One last thing I’d like to comment on is. The dev team that really supports the ability to mod with these kick ass new platforms, is going to do well. I feel that rFactor 1 crowd is dying for new platform to call home and this could be it since rFactor 2 has been slow to the punch.

What do you think ? Have you tried it out yet ? If you haven’t and are interested, it’s available on STEAM for $39.99. You can also check out their website at www.AssettoCorsa.net

More to come from us at ISR. We’re just getting our feet wet with Assetto Corsa and this is what I’ve found so far. We hope you’ve enjoyed our first impressions.