TFT Central sought out some information on Samsung’s panel roadmap for Q2 2017. Apparently, there are two very interesting monitors on their way, especially for sim racers.

Yes, you read correctly, Samsung is planning to produce a monitor with a size of 49 inches and an aspect ratio of 32:9, which it is calling “Grand Circle” format. Why circle? Because the monitor is curved, at 1800R to precise. 1800R describes the radius of the circle in millimetres which you get by continuing the monitor’s curve to form a circle. The lower the value, the tighter the curve. Here is an image to illustrate the curvature. 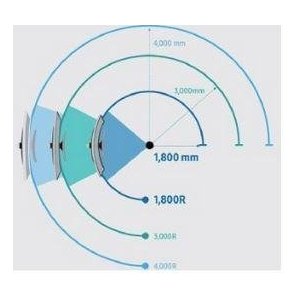 The monitor will have a VA panel with a resolution of 3840 x 1080, which is essentially two Full HD screens put together. Hence, that kind of resolution is also known as “DFHD” (Double Full HD).

Especially interesting are the alleged refresh rate of 144 Hz and the support for both Nvidia’s G-sync and AMD’s FreeSync.

Even another massive Grand Circle monitor is on its way. With a diagonal of “only” 44 inches it is a little bit smaller than its bigger counterpart. With its size and a resolution of 3840 x 1200 pixels, it exactly replicates two 24.7” monitors but without the bezel. Curvature is the same at 1800R and the VA panel was also taken over. Although this sounds more like an office oriented monitor, a 144 Hz version will be available too, together with the standard 60Hz version.

Both monitors are expected to go into production in September 2017 and no details on pricing have been shared yet.

For sim racers, these monitors will probably be of even greater interest than the current 21:9 monitors, since they offer a greater field of view and are even bigger. If you are thinking about building a rig, are limited in width, or get annoyed with bezels, these monitors might be a solution for you, should they release as stated.

Please note that the image above is not one of the monitors in question but one of Samsung’s current 21:9 monitors, the SE790.