Here’s something a little different from the usual race simulators we are used to seeing here on ISRTV. The team at Mecanitzats Muntada in Spain have created the CKU28 Sport Fitness MotoGP bike simulator and developed it into a professional grade training tool for MotoGP and Superbike riders. A two wheeled simulator looks like it could be a lot of fun, just imagine this training simulator being used in conjunction with an Oculus Rift or Vive VR head mounted display, immersion city, mate!

The construction is heavy duty and mimics the movements of a MotoGP bike with extreme accuracy. Coupled to a large screen display which is mounted to the sim rig itself, the whole rig can lean at the same acute angles just as well as a real MotoGP bike does out on circuit! The non English language spoken in this video notwithstanding, the images are what it’s all about and it makes for an interesting 8 minutes or so of viewing. 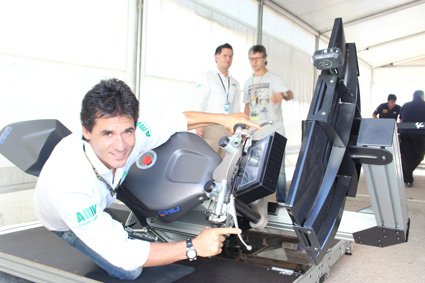 The training simulator has been developed to exercise all of the muscles specific to motorcycle racing, which would otherwise be impossible to achieve during a normal fitness session.

The CKU28 can replicate a motorcycle race, including all regulations and settings so that each rider can find their optimal riding position. As a first impression this may look like a video game, but in fact, the monitor displays video recordings made by “on-board” cameras at different circuits used during the World Championship season.

Although the development of the CKU-28 took more than a year, its function is relatively simple. The rider’s weight, and if necessary, their race set-up is entered into the onboard control panel. The footrests, levers and controls are adjusted to suit the rider’s body size. With these minimal inputs it is possible to start a session rider specific training simulation.

In addition, CKU28 also allows you to adjust the aggressiveness of its movements, especially to recover the simulator to its vertical position. The brake and clutch pressure, as well as the gearshift can also be adjusted.

A training simulation session consists of naturally mimicking the image displayed on the monitor, which is installed in front of the handlebars and attached to the simulator frame itself.

Once the bike has been tilted, its return to the vertical position is automatically driven by a mechanism which is activated whilst under acceleration. Therefore, the rider gently accelerating out of the corners causes the simulator to right itself as a result of the rider’s throttle inputs.

The resulting simulation sessions are consistent and realistic, allowing the rider to train for qualifying, full race distances or endurance tests.

CKU28 was engineered by Kini Muntada and developed in partnership with Alex Crivillé and Javier Ullate, MotoGP riders.