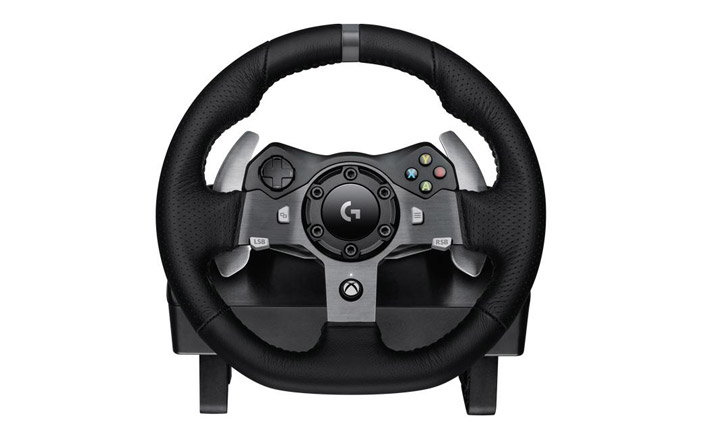 Welcome to our review of the Logitech G920 Driving Force wheel and pedal set for the Xbox One. The G920 is a really important wheel because it is the first one offered by Logitech for any generation of the Xbox. The wheel and pedals will retail for $399.99 when they go on sale on October 15th. If you want the shifter, you’ll need to purchase that separately for an additional $60.

If you are having the feeling of déjà vu when looking at the wheel, we’ll be the first to let you know that you aren’t crazy. The G920 is very similar to it’s PlayStation 4 counterpart, the G29. Unfortunately for the G920, the most notable differences is what it lacks. The wheel doesn’t have the shift lights that the G29 – and even the G27 before it – had, but to be fair, these lights have never really been that useful because they’re below your field of view. 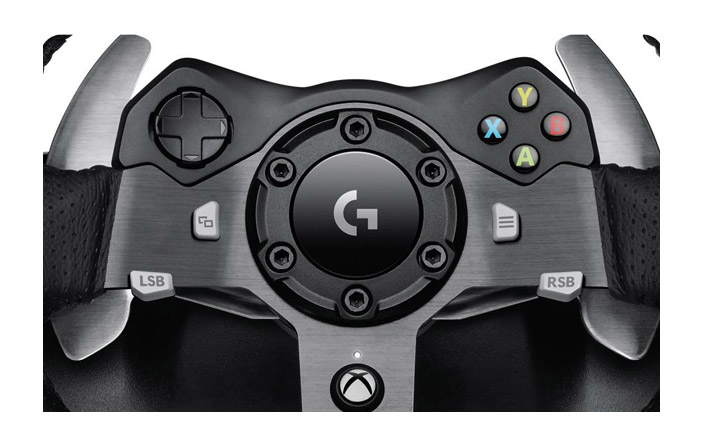 A more impactful missing feature on the G920 though is the missing 24-point selection dial and button and the +/- button, both of which come in handy for making adjustments while driving. Naturally, the G920 comes with the Xbox Guide button but it also features an extremely bright white power indicator LED that is blinding if you look anywhere near the wheel. It’s out of your field of view while driving but we have a feeling most owners will be solving this annoyance with a piece of tape.

Also of note is that the G920 does not have a controller pairing LED for Kinect like say the Thrustmaster TX does, not that it will be missed as support for the Kinect continues to dwindle. The only other cosmetic differences between the G29 and G920 is a different color scheme, with the G920 matching the off white of the Xbox logo versus the bright blue of the G29. Honestly, we prefer the subdued color scheme of the G920 as it appears classier versus the boy-racer looking G29.

As for the internals, Logitech sticks with their tried and true helical gearing dual-motor force feedback system which debuted on the G27. Logitech says that they have updated the system with a hall-effect steering sensor for better long term reliability. The G920 also features 900 degrees of rotation and automatically calibrates on start-up. 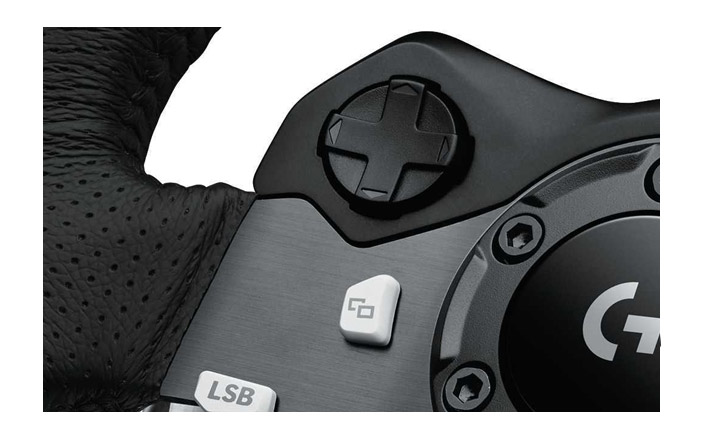 The pedals are the exact same pedals that come with the G29. This means they also receive the brake mod upgrade over the G27 which uses a rubber stop to mimic a pressure-sensitive brake system, providing a more responsive braking feel. Unfortunately, Logitech kept the same 8-bit controller as the G27, providing a barely acceptable 256 steps of resolution. The pedal faces can also be adjusted left or right to improve heel-to-toe braking or to improve ergonomics.

Now that we’ve taken a look at the wheel and pedals, let’s talk about how they performed on some of the most popular Xbox One titles. First up is Forza Motorsport 6. Overall the G920 did pretty well with Forza 6. Not only was the wheel and pedals compatible but so was the add-on Driving Force Shifter. The G920 still suffers from the on-center force feedback deadzone that the geared force feedback system has always suffered from but the issue doesn’t affect you much in Forza 6. 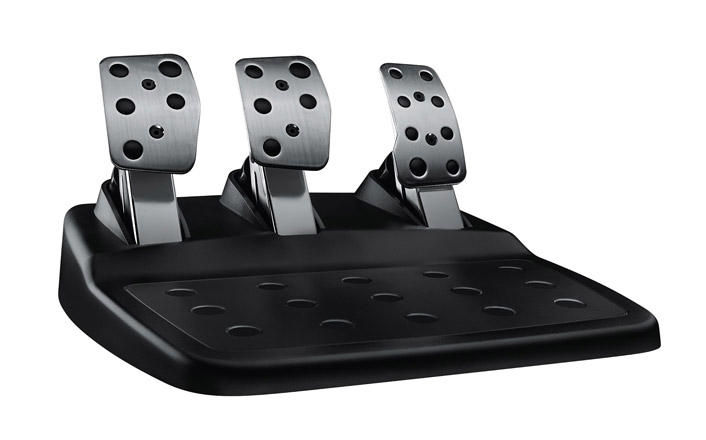 Next we transitioned to Codemaster’s F1 2015 where the wheel felt its best. Unlike other wheels with F1 2015, the G920 worked right out of the box without any changes to the linearity or saturation of the wheel and pedals. Performance wise, the only negative was some slight vibration of the wheel at high speeds – which is a long time staple of this motor – but overall this is a minor issue. The rest of the time the wheel felt really good, providing really positive force feedback and accuracy.

Lastly we drove the wheel with Project CARS. Slightly Mad Studios and Logitech have worked together on the development of this wheel, so to no surprise, the game not only recognized the wheel – and shifter – but had all the buttons mapped nicely. Force feedback in Project CARS felt good but in faster cars the on-center deadzone became quit apparent. This made it difficult to accurately place the car on track and hit your marks. We tried to adjust this deadzone out in the in-game settings but that didn’t help either.

Before we get to into the pros and cons, a word on the pedals. Even with Logitech sticking to the 8-bit controller, the only time it was an issue was for the Test Drive we did with the 2015 Lotus F1 car in Forza Motorsport 6. The ultra torquey car requires a very smooth throttle and it was a real struggle to do so with these pedals. On the other hand, the new brake mod does feel really positive, providing good feedback from engagement to the hard stop.

So that’s our review of the Logitech G920 Driving Force wheel and pedals on the Xbox One. To no surprise, Logitech has provided Xbox One owners with another solid option to cross compare when it’s time to decide on purchasing a wheel. 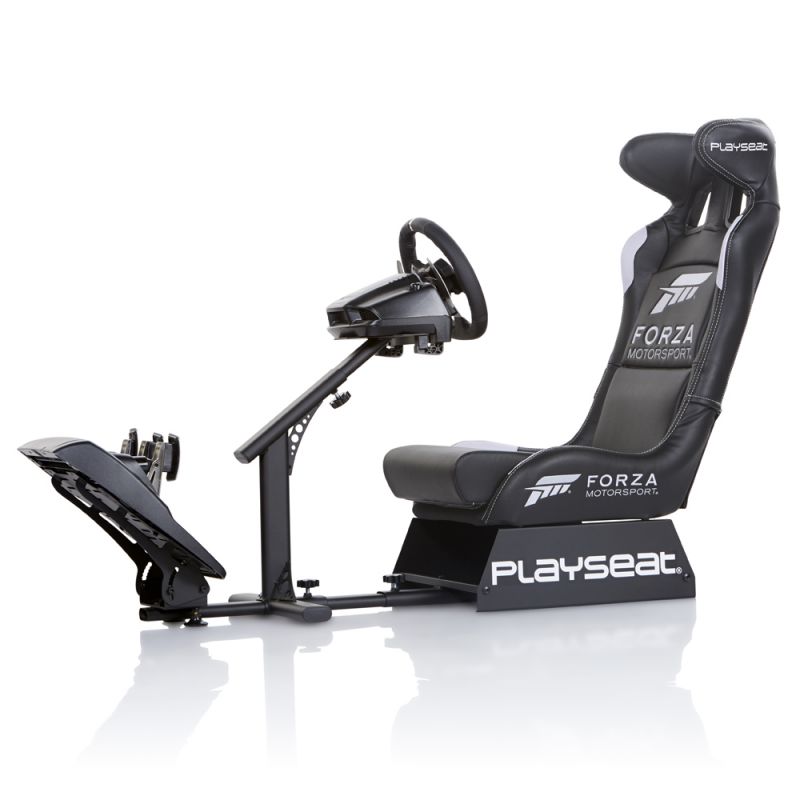 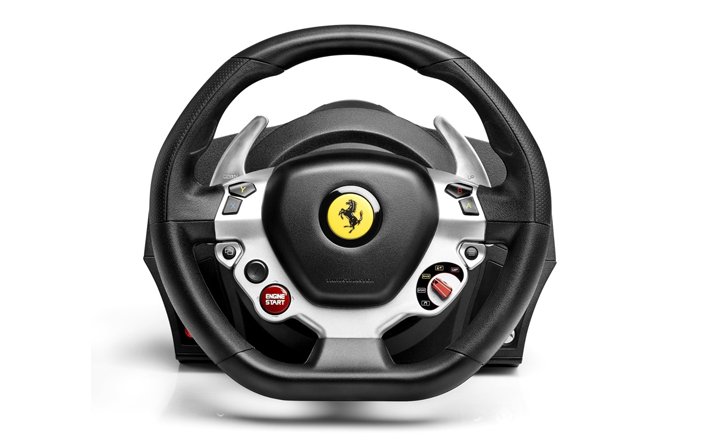