With beta versions currently being tested by a select amount of the community and a lot of news regarding its content in the last weeks, it seems that Polyphony Digital’s Gran Turismo Sport is coming along nicely. Today, yet another image of a track being added to the game surfaced on Twitter.

The screenshot’s source cannot be fully identified, but according to GTPlanet it was first posted on Twitter. The account which posted the picture was not official and has now been suspended and it . However, the screenshot has not and you can view it above.

We can see a McLaren 650S GT3 on its way out of the Senna “S” onto “Reta Oposta”, the back straight. For illustration, a track map can be viewed below. The McLaren itself is not new though and the cars following it, namely a Chevrolet Corvette C7.R, a Mercedes SLS AMG GT3 and an Audi R8 LMS, are not either. 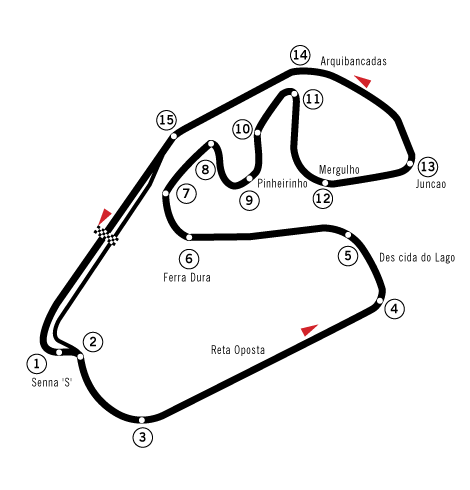 The Autódromo José Carlos Pace, better known as Interlagos, is one of South America’s most iconic racetracks. Located near São Paulo in tropical Brazil, the 17-turn track is probably best known for hosting F1 races every year. In fact, it has already been doing so since 1973 and thanks to Brazil’s diverse climate, some very entertaining races were produced over the years. For example, last year’s F1 race was one of the most turbulent of the season due to heavy rain.