Here is a detailed re-cap of the London unveiling and launch event for Gran Turismo Sport. Darin was able to secure an invite for ISRTV to attend the unveiling at the Copper Box Arena, situated on the site of the 2012 London Olympics. The event was held over two consecutive days from the 19th to the 20th of May.  It was truly a genuine privilege to be able to attend and cover this great event, whilst joining the world’s sim racing press and assorted dignitaries for the unveiling of this next gen title.

Thursday, May 19. The day started with an early morning train journey to Schiphol Airpot Amsterdam, followed by a brisk 35 minute British Airways flight to London City Airport. Upon my arrival in London, I headed for the DLR train line, which would take me to my lodgings for the evening.

Later in the afternoon, another train ride brought me to Stratford Station, where I made my way on foot to the Olympic complex. It was only a short 15 minute walk from the station to the Copper Box Arena, where the sound of high revving engines and the smell of burning rubber greeted me. Outside the venue there were several high powered exotic road cars, as well as a couple of Nismo 370Z race/ drift cars with lucky invitees being driven around a very short parcours laid out at the front of the Arena. It was definitely a cool way to welcome visitors to the event. 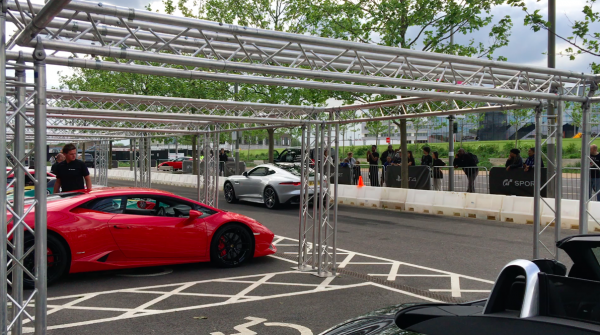 Heading inside, I registered myself and received a blue GT logo’d wristband, which entitled me access to the space where the main event was to be held. Walking down the dark and moody black-light illuminated corridor with the sounds of racing cars being pumped through the PA system, this brought me to the main event area. With my eyes still adjusting to the light levels, I emerged from the corridor to be greeted by a large space dominated by nine full-scale concept cars, straight from Gran Turismo Sport, gaming come to life!

At the front of the space was a large seating area and a podium decked out with sixteen Playseat F1 sim rigs, equipped with Thrustmaster T300 wheels and pedals. These rigs were made available to us as well, although they were to be used for the pre-season Nations and Manufactures FIA Gran Turismo championship races a little later on in the evening. The podium also provided the backdrop for the official presentation by Gran Turismo Producer, Kazunori Yamauchi.

On the opposite side of the hall, there were eight more neon-lit sim racing pods for visitors to try their hands at the latest title. Available for us to drive were the following circuits; Brands Hatch, Willow Springs, Tokyo Expressway and my personal favourite, the challenging Nordschleife.

I managed to get behind the wheel to try the game out for myself.  As you can imagine, everyone there wanted to try the latest offering from Kazunori Yamauchi. My first drive was a half lap of The Nordschleife in a single brand race. Initial impressions for me, being a PC sim racer, the graphics, the polygon count per car and the scenery are almost photo realistic when you see them in person. However, my first driving impressions were a little underwhelming. I did not feel that I was totally connected to what was happening on the screen, in some of the corners the car would wash-out understeer without warning. For me, there was no real feeling of weight transfer and catching a slide was more thanks to the visual cues rather than a tactile feeling through the steering wheel.  I guess I have been a little spoilt when it comes to sim rigs and controls lately, so comparing the experience with how I usually sim race, well, suffice to say it was quite a different experience to racing a PC title such as iRacing or Assetto Corsa. 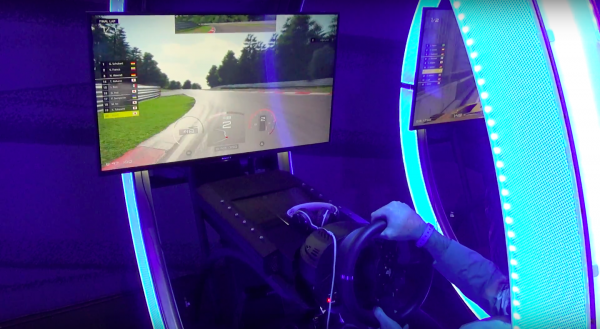 After driving in the sim racing pod you see here above, I made my way over to the other side of the hall to try out the F1 style rigs and see if I could get enough time to complete a short race. Luckily, I did not have to wait too long, so after setting up camera and tripod I installed myself into the shoehorn shaped Playseat. The race this time was in a GT3 car at Brands Hatch. Personally, I like the more powerful race cars in titles and Gran Turismo is no exception, this was to be a good comparison to what I usually drive on the PC! Sitting somewhat uncomfortably in the Playseat with the dreaded centre post between my legs, I prepared to do battle on the Brands Hatch short course!

There was almost no loading time and I was able to start the race within seconds of being ready to go! It felt a little odd to be sitting in an F1 styled rig, when in reality a GT3 car’s seating position is more upright. The race started and once again I had that feeling of slight detachment from the goings on on the screen. Although this time, the steering felt to be at least a little more precise compared to the pod from earlier on. Could also have something to do with the type of car and the quickness of the steering. Because of the extra power available, power oversteer slides were easier to catch and correct. The corner that caught me out was turn one, I could not manage to hit that bloody apex at all, which had me wildly understeering off into the gravel trap. Bugger! A word on the sounds in-game, they seemed a little canned, this may have been caused by the headphones we were wearing as the volume was quite low and the engine sounds were a little hard to hear. What I did hear later on during the presentation sounded quite acceptable.

I did enjoy myself more with this car and track combo though, it seems to me that the tyre physics don’t quite convey the moment of losing front or rear end grip, it sort of just happens, if that makes any sense? All in all though, it was actually quite good fun to drive this new console title, not having really done much of that in the past it gave me a good insight into the differences between PC and console racing. 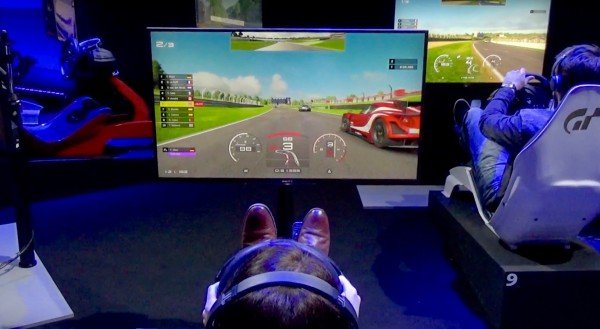 The time was getting on and the official ceremony was fast approaching, so I took my place with the other journalists at the event and we all patiently waited for Kazunori Yamauchi to take the stage. Ben Edwards, head commentator from the British Channel 4 F1 team was the MC for the evening and he introduced Kazunori to much applause from all in attendance. Speaking only Japanese, Kazunori had his long time translator to translate his speech into English for us.

He spoke at length about how far the title had progressed and what his driving passion was in producing their next gen title. Along with the evolved ”original Gran Turismo” graphic engine, a mention was also made about the physics engine of  Gran Turismo Sport, which Kazunori claims to be closer to real-life driving characteristics than ever before!

As well as that, he introduced several new features to the franchise, one of which was ”Scapes”, which is a new generation Photo Mode for Gran Turismo that highlights travel. Kazunori intimated that this new technology could just possibly change the art of car photography as we know it. There are more than 1000 locations from around the world in which Scapes allows you to place your car of choice in one of these scenes and produce stunning photographs of them.

”Sport” mode is officially supported by the FIA, this is big deal folks! The first race series is the “Nations Cup.” Players from around the world representing their home country will contest this series. The second race series is the “Manufacturer Fan Cup,” where players select their favorite auto maker and are able represent them in the series. These series will be broadcast live around the world, which brings sim racing in-line with its real world counterpart. Winners of both series will be officially recognised by the FIA and presented with their respective championship trophies alongside real life motorsports champions in Paris.

Another major announcement was the ”Livery Editor”, something that many GT owners had been hoping for! Gran Turismo Sport’s “Livery Editor” enables players to customize the livery of their own vehicles, if you have a favourite race team or car, you can recreate its livery using this new feature.

Kazunori’s speech ended to a rousing applause and we were then all treated to the official Gran Turismo Sport opening video. 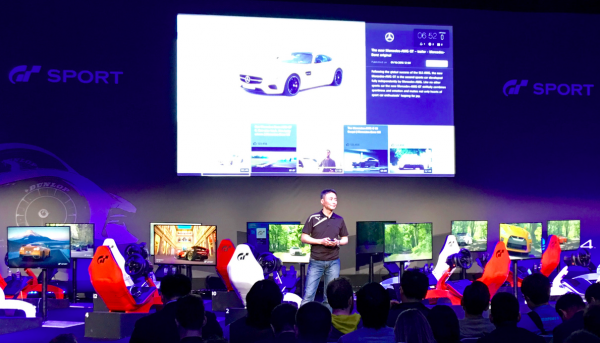 Immediately after the official announcing of Gran Turismo Sport, several pre-season FIA recognised races were held with live commentary from GTPlanet’s Jordan Greer calling the races. The first series was the ”Nations Cup.” This series was conducted under the knock out system on several different circuits, whereby only the top 8 finishers made it through to the final race on the Brands Hatch GP circuit. Winner of the series was the Japanese driver, T.Takahashi.

The ”Manufacturer Fan Cup” was also held on the Nordschleife, it was a six lap race with a mandatory driver change. This race exposed an interesting feature of the live race series. At one point, there was a collision on the circuit and we saw a full course yellow being displayed just as in the real world of racing, a very nice touch which added to the realism of the race. This race was won by the international pairing of  Y.Tomibahashi from Japan and Carlos Martinez from Spain. What seems very apparent to me, is that sim racing has grown exponentially in popularity. I believe it will evolve into something akin to real world racing with high profile drivers competing for huge prizes! Sim racing is the true definition of eSport!

With the evening drawing to a close, I did manage to chat with Kazunori-san, I congratulated him on the event and his hard work leading up to the release of Gran Turismo Sport. Being really into hardware, I just had to ask him about the Thrustmaster wheel, which was sitting in a glass case right next to where we were speaking. This rather awesome looking wheel went largely ignored by many of the visitors to the event. Kazunori gave very little away, he told me he was involved in the design process and that the wheels main attributes were ” very linear, powerful and high torque”  It is all conjecture at this point, but we could be looking at something quite big in the sim racing world, something that may surprise a lot of people when it is released! 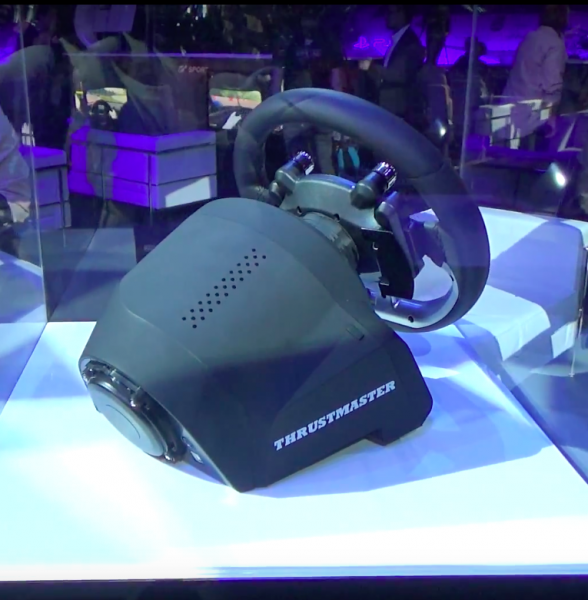 To cap it all off, it was a whirlwind trip to London, and I would like to thank Darin for getting me on the invite list and having the opportunity to cover the event for all of our site members and visitors. Please feel free to browse the gallery as there are a lot more images to check out. I hope you all enjoyed reading this re-cap! Stay tuned for more to come.