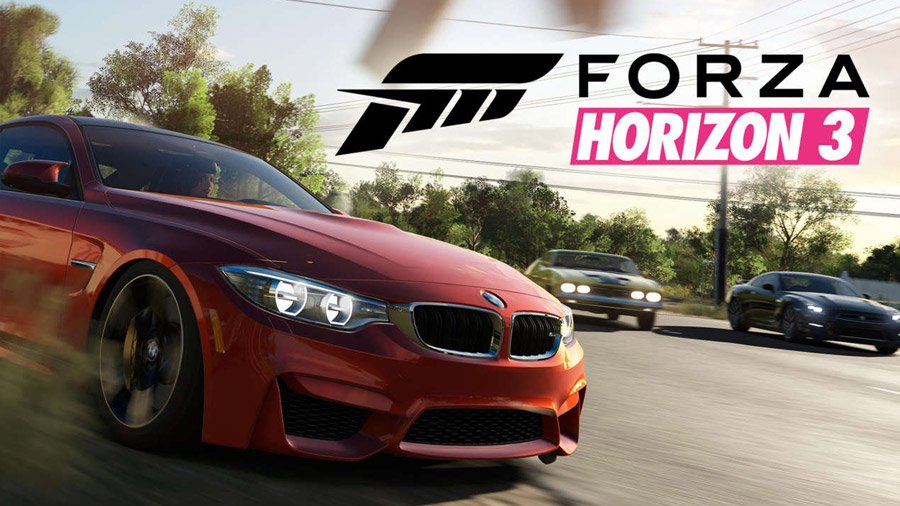 September 20, 2016 – While Forza Horizon 3 surely isn’t a sim racing title, the Horizon franchise has been a fun way to blow off steam while still racing cars over the years, with a wheel or controller.  The question is, does Forza Horizon 3 live up or even surpass the experience of the past games?  Let’s find out.

This Day 1 Review is for the Xbox One only as the PC version is not yet available at the time of this review.  At some point we’ll review the PC version as well and see how it compares.  Forza Horizon 3 from Playground Games and Turn 10 Studios will be available on September 23rd for Ultimate Edition Early Access owners and the 27th for Deluxe and Standard Edition owners. 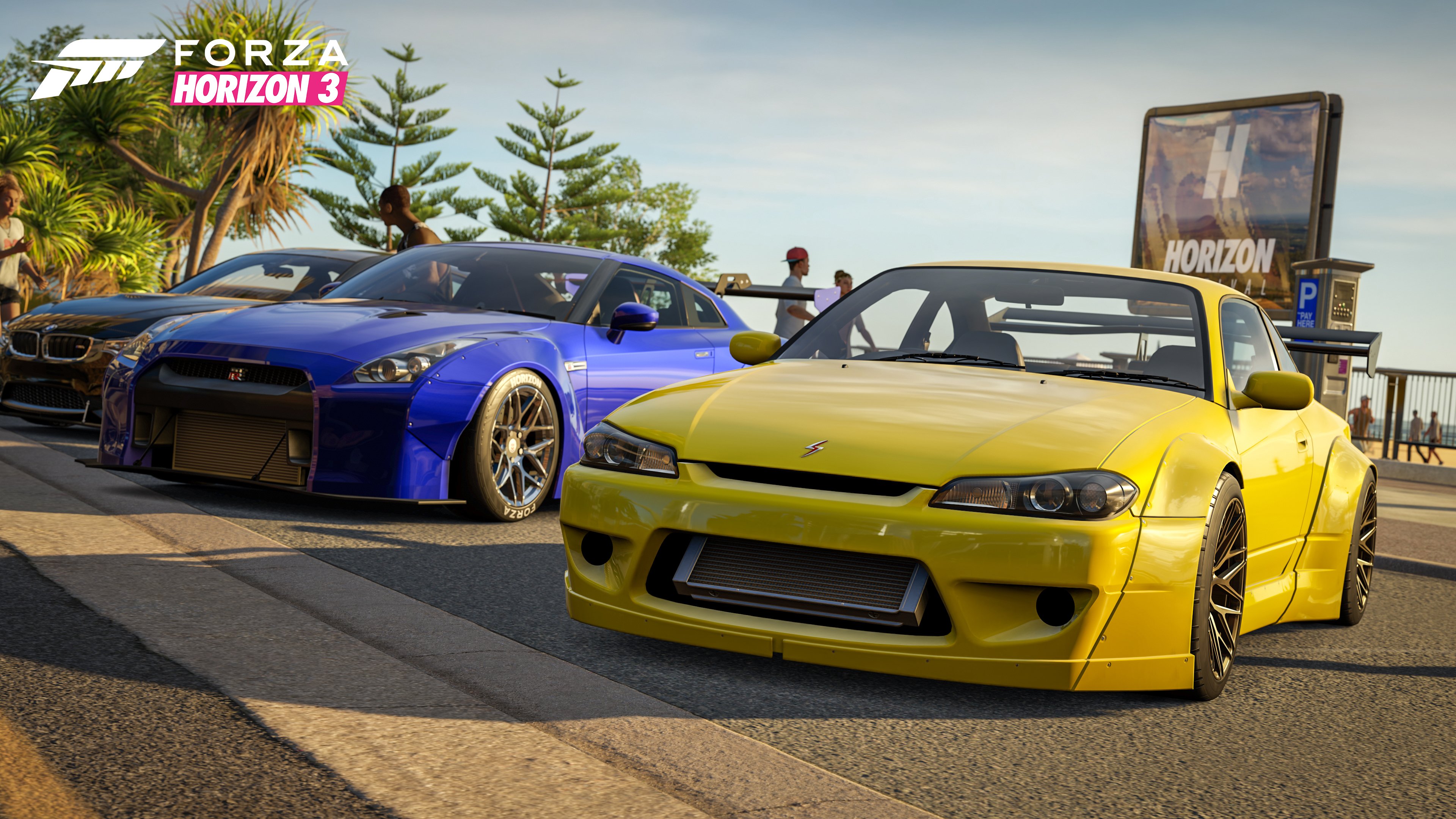 So what exactly is Forza Horizon 3?  Like past Horizon titles, it’s about the Horizon Festival, a celebration of cars that seems to turn everyone in that country – this time Australia – into massive petrol heads.  If only this was true in real life….

The difference in Forza Horizon 3 is that instead of being a competitor in the Horizon Festival, you are now running it, because who doesn’t like to be the boss?

Objective? Get as many fans as possible to expand the festival in terms of new events and new locations around Australia.

How? By racing, duh!

Using your handy-dandy map in Options, you can find all sorts of different races; Closed Circuits, Trails, Bucket List Events, Cross Country Circuits, Head-to-Head, Street Races, City Sprint, designing your own races via the new Blueprint option, and that’s just what I got to in a short time, there’s bound to be more.

But maybe you don’t give a damn about the fans?  Then you can work on your credits and XP!  Like many games, XP is just a number for bragging rights and unlocking things like Reward Cars. Credits are straight cash hommie, to buy new cars and upgrade the ones in your garage.  Naturally, both increase when you win races, and the higher you finish and the more difficult the settings you choose, the more of both you get.

Or maybe you don’t just want to race to increase your fans, credits and XP?  You don’t have too!  You literally can just goof off and level up.  Drifting, Burnout, Catching Air, Hitting Things, Hard Landing, Drafting, Near Misses, Danger Sign Jumps, Speed Zones, One-Eighties, Finding New Roads, and even Clean Racing….although the latter goes against all the other ones…

So that’s what Forza Horizon 3 is…but does it do it well?  Pretty much.

Forza Horizon 3 really is a celebration of cars and car culture, but you can’t do that with a crap cars list.  Luckily that isn’t a problem in Horizon 3. 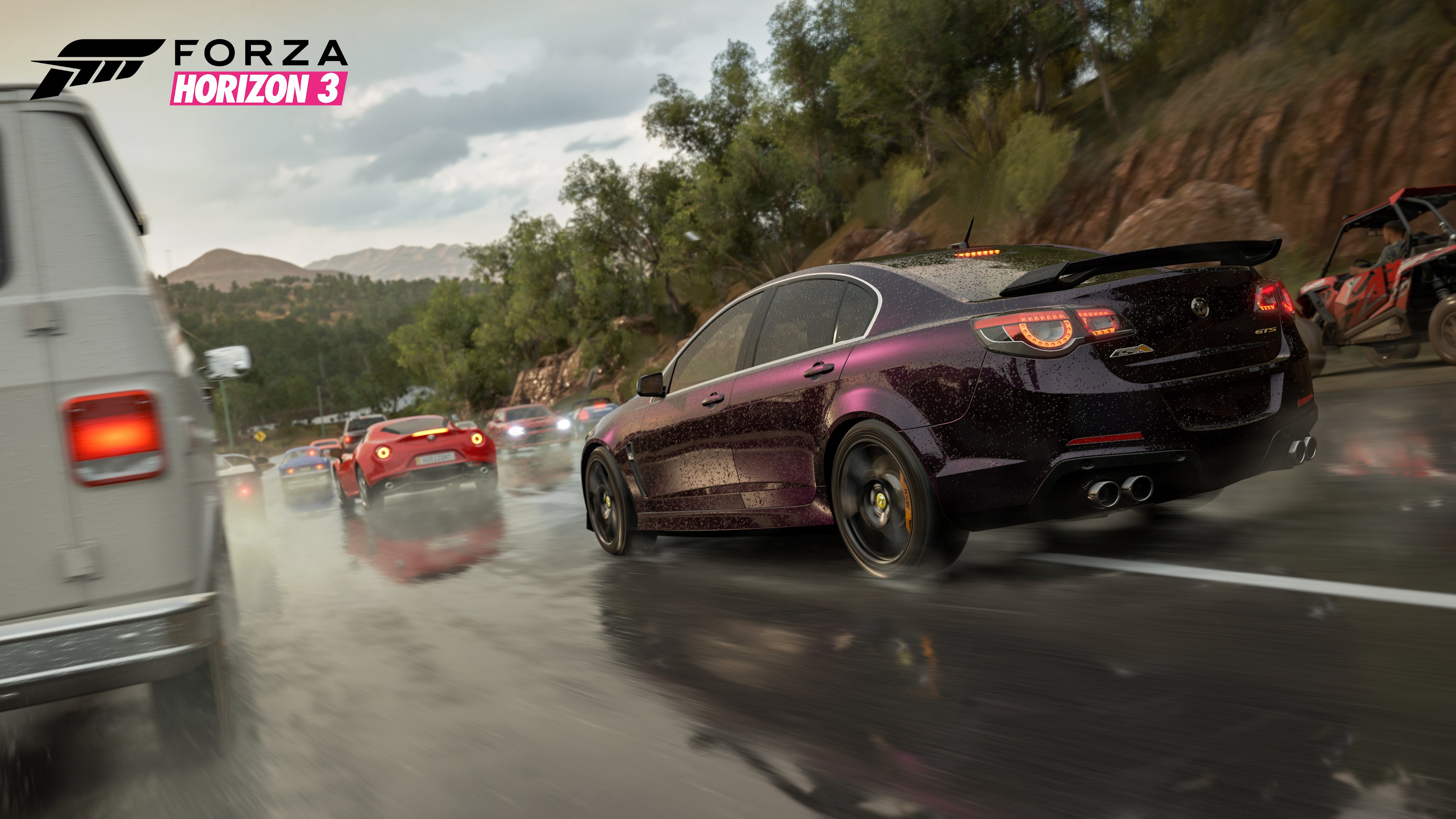 With 350+ unique cars, no fillers/slightly different duplicates and some great Aussie rides, Forza Horizon 3 has nearly everything.  Nearly because there are some noticeable absences, such as VW and Porsche.  Can you say DLC…?

Cars graphically look great, and can be roughed up a bit – but not too much – which is nice.  Word of advice though.  While you can run cars on ‘Simulated’ damage, like I did, I think I would have enjoyed it more if my engine wasn’t constantly misfiring and I was having to look out through a broken windshield thanks to my hard driving…because that’s what you do in Horizon.

Speaking of looking out the windshields, the interiors are also nicely done, but again in Forza, you can’t adjust your seating position and you can’t turn off the driver’s hands and wheel, both annoying when you’re using a wheel and pedals.  With that said, most cars don’t feel quite as far back as they did in Forza Motorsport 6, so there’s that.

But a very noticeable improvement over Forza Motorsport 6 are the sounds.  Overall, engine notes sound good, with some cars, like the Ferrari F12 TDF sounding fantastic.  But best of all is the loudness of your engine note, which no longer gets drowned out by the cars you’re racing around…finally.  Other sounds such as driving off road, through water and hitting shrubs also sound great. 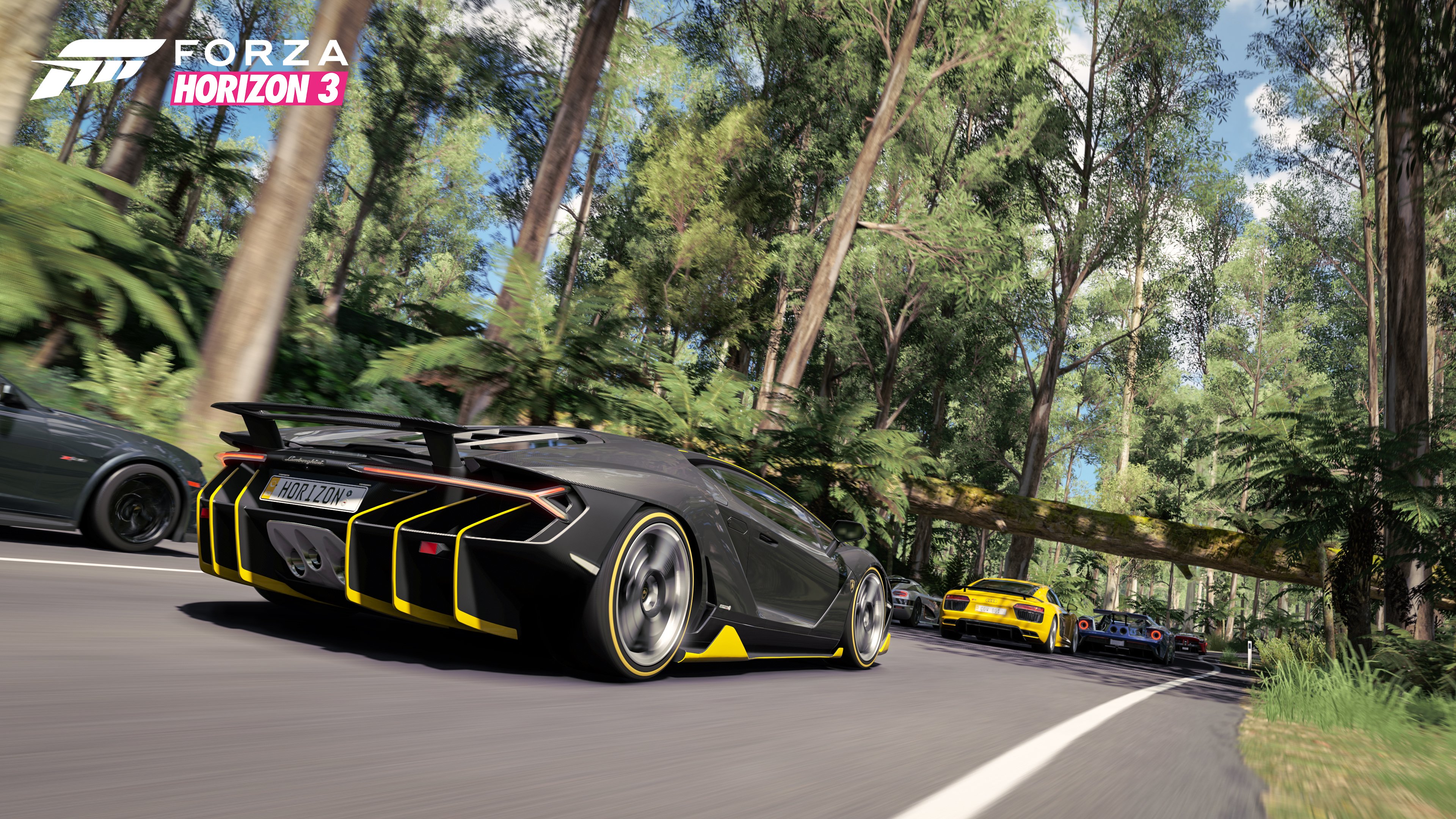 While having a whole bunch of cars that look pretty and sound good maybe cool and all, if they drive terribly, that doesn’t matter.  So how do the cars drive?  Good.

Naturally, being Inside Sim Racing, we drove the car in Simulation mode, and would certainly suggest that you do too, especially if you’re racing with a wheel (and if you need a wheel check out our Xbox One Buyers Guide).  Simulation just translates a lot more information through the wheel.

The real highlight of the driving physics is the off-road driving.  All the off road vehicles have a nice weight and predictability to them, and are a real joy to go trashing around in.

The road cars for the most part also feel good but there is more deviation from car-to-car.  Some felt great.  Standouts to me include the, Bmw e46 M3, and ferrari f12 TDF.  Both were very predictable and have believable levels of grip.

But others weren’t so great.  The BMW Z4 and Corvette C7.R GTE race cars felt like they were rolling on tires made of rocks that offered zero grip.  With that said, they are race cars and their setups can be adjusted.

I did enjoy the feel of the all the cars in the rain, which may still be a little forgiving, but certainly not easy.

Of course, all this cars and physics talk means nothing if the force feedback is bad…well…at least if you’re running with a wheel.  If you do drive with a wheel, the first place you have to go is the ‘Advanced Settings’ page and turn ‘Force Feedback’ and ‘Vibration’ up to 100%.  Well, you could run vibration at like 75% if 100% is too much, but force feedback should be at 100%.  Also turn degrees of rotation to 900 degrees since this feels to be the best overall and matches the on-screen wheel (very annoying when they don’t match up).

After making those changes, both the Thrustmaster TX and Fanatec CSL wheels felt good.

One thing that did give me some fits when driving, was changing gears.  I ran with the automatic clutch so I could go between the wheel mounted paddles and H-pattern and had some issues with both.

None of it makes any sense and I’m still scratching my head on this one and interested to see if others have similar issues. 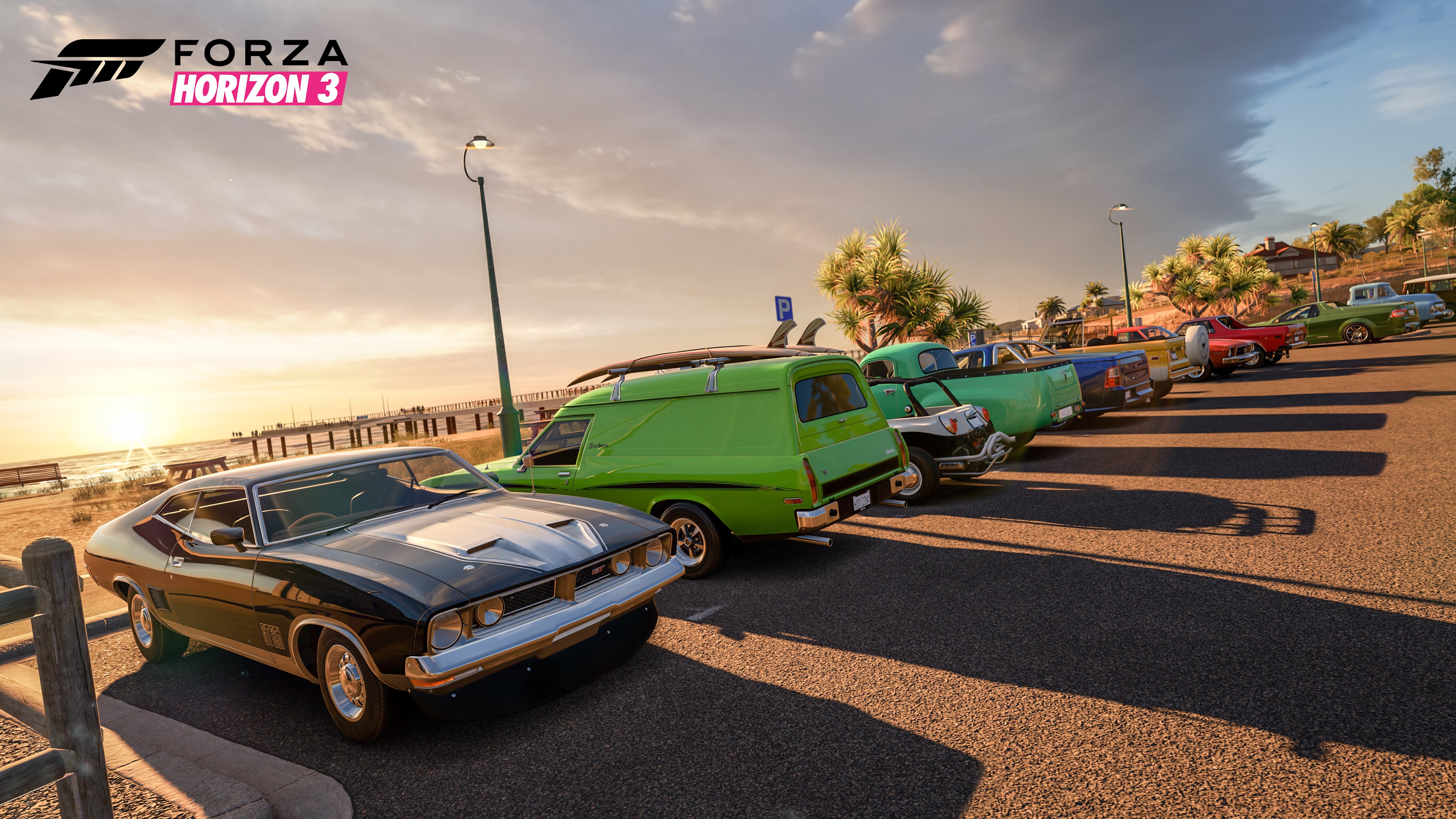 Of course, cars and physics and force feedback isn’t everything if the AI is bad.  Luckily, the AI is pretty serviceable.

They will rough you up – and a proximity arrow like in Forza Motorsport 6 would be very helpful from in the cockpit to let you know when they’re making a move – but I think it’s an acceptable amount of beating and banging for a game that promotes beating and banging.

Twelve cars in the field is a nice number, and with eight AI difficulty levels, there’s plenty of levels to choose from.  For myself, I mostly ran the third from the top AI level of ‘Expert’.  The interesting thing is, Expert was a good level for off-roading, but pretty difficult on asphalt.

For off-road races, I was actually able to run pretty well at ‘Pro’ and ‘Unbeatable’ and didn’t see a major difference between the top three AI levels.  But for asphalt racing, I had to drop the difficulty down a level to ‘Highly Skilled’ to feel like I had a chance to win on the first attempt.

The AI doesn’t rubberband – when the AI speed up and slow down to keep you around the pack – but it does adjust their speed based on your car prior to the race.  For example, I ran a one-make Chevrolet race in the Corvette C7.R GTE race car and was getting smoked by production C4 and C5 Corvettes.  Yea…

Luckily, this was a few-and-far-between occurrence, with most races having AI in cars of similar performance.  But when it does happen, it’s kind of annoying to build up a car to only see it not really matter. 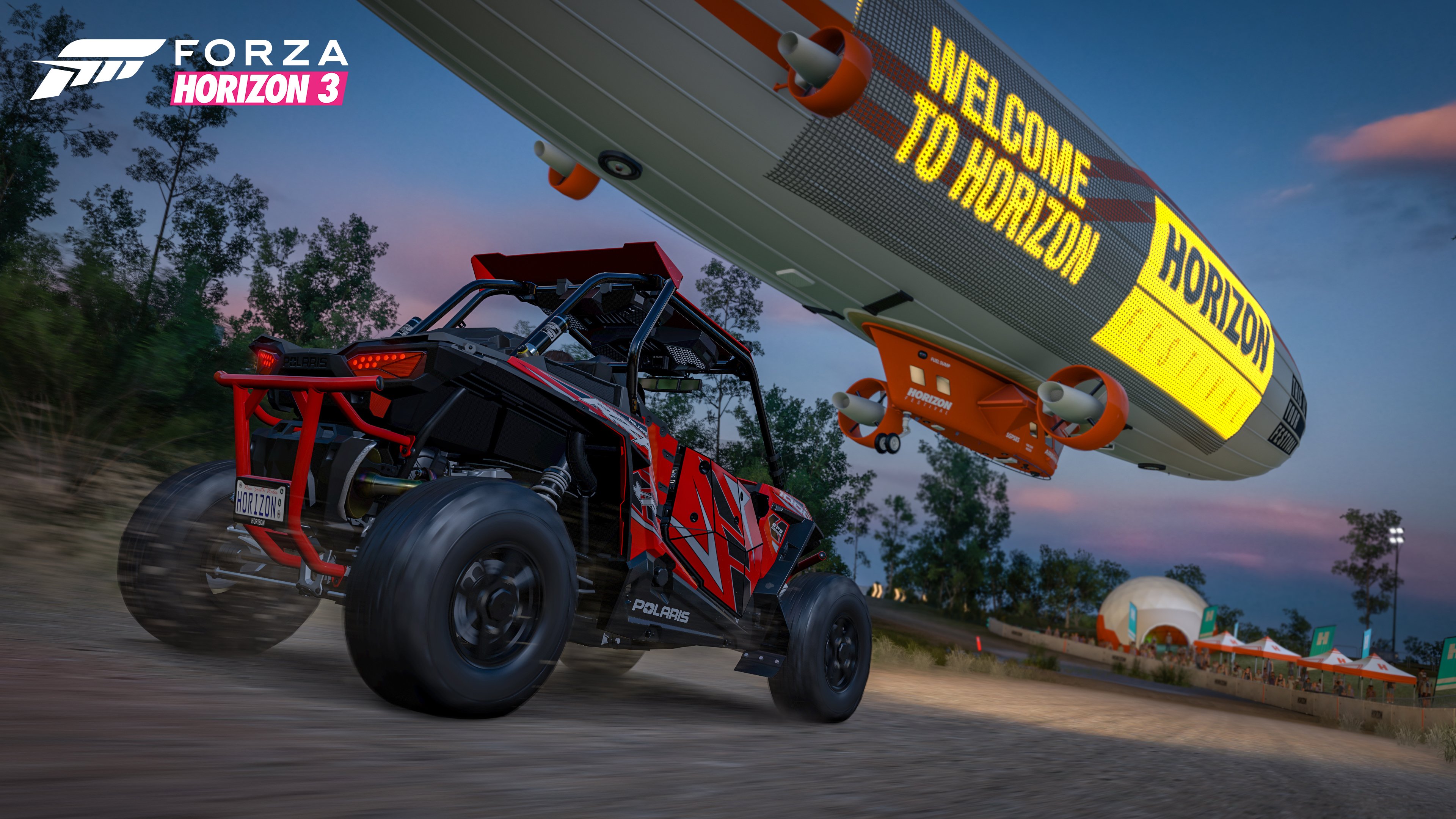 Lets talk about Australia.  What a smart place to bring Forza Horizon 3 to.  Six different eco-types take you from the beach to the city to the rainforest to the outback…i’m told, not even there yet!  In fact, Forza Horizon 3’s map is twice the size of 2’s, although I will say that I’ve driven on about a quarter of the roads in short time and only been to two festival locations.

The look?  Gorgeous.  New skies, the ever changing weather, the environment, and the massive amount of debris kicked up while racing looks fantastic and really gets you into the game.

And even though the game is locked at 30 frames per second (fps), surprisingly, it didn’t bother me and I’m use to running 90+ fps on a 144 Hz gaming monitor.  Not sure why or how, but never felt the annoyance of running at low fps.

With that said, based off of my experience with the PC version at E3, that’s the one that is going to be stunning looking and can’t wait to get our hands on it.

Forza Horizon 3 does contain a couple misses.  The loading times are long, especially getting into the game after you’ve made some progress.  Also, the new ‘Beauty Spot’ feature falls flat for me with a ‘wooptie-do’ cut scene. 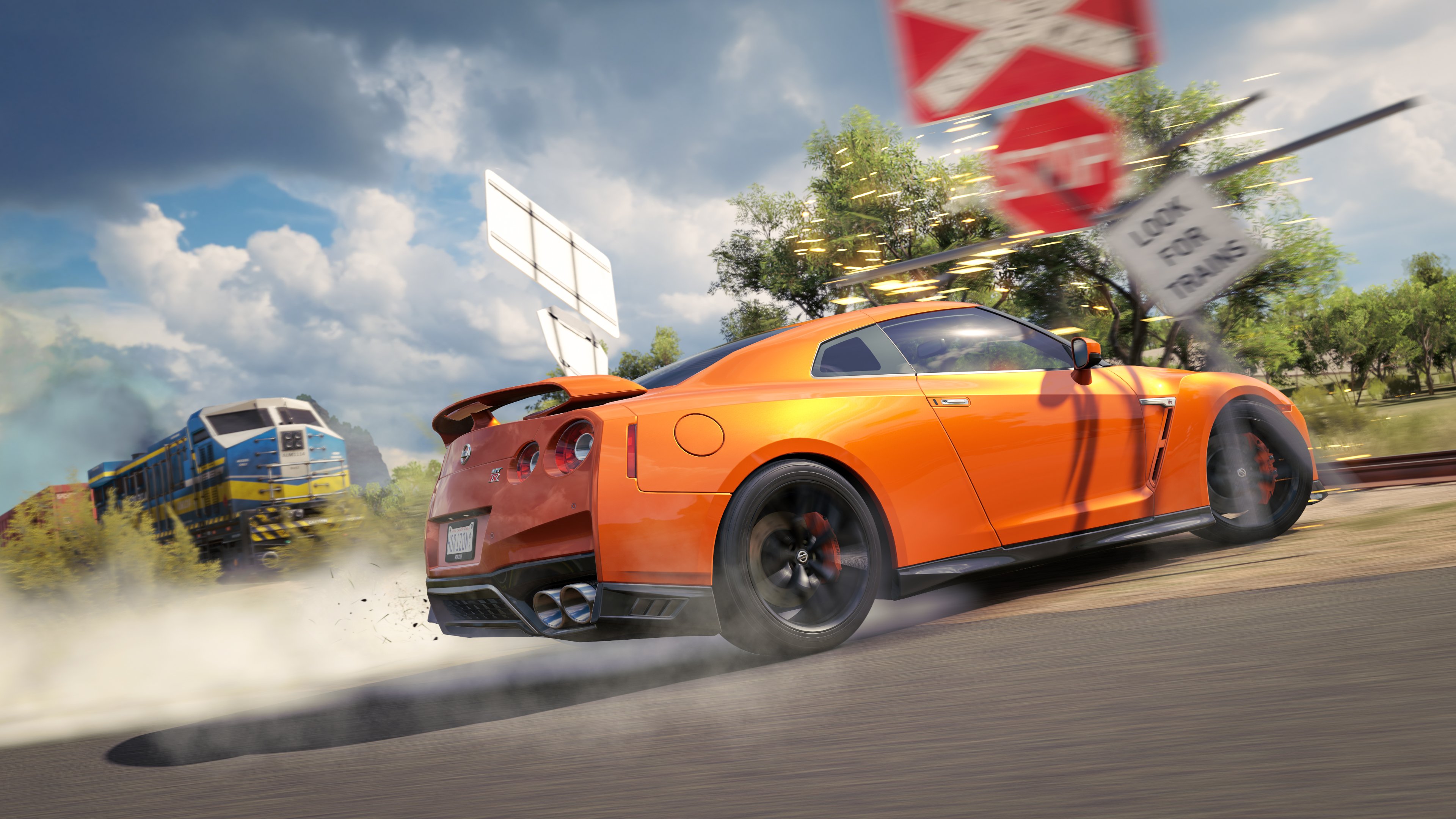 Time for the conclusion.  Is Forza Horizon 3 it worth it, even with us not being able to truly try out multiplayer yet, or the game on the PC?

Forza has become such an impressive franchise and Forza Horizon 3 continues the tradition.  There is so much to do in single player mode and we know multiplayer is going to be a whole new thing that will expand the playability on for a long time with 12 player multiplayer and four player career online co-op with cross play.

The best compliment I can say about FH3 is that it allows you to have the experience you want.  D you just want to say screw it and wreck everything, do it.  You want to get to the end of the game as fast as possible? Go for it.  You want to find every last thing in the game? Sweet.  Want to relax on the couch with the controller? Perfect.  Want to take advantage of the sim rig you already have? Do it.  You want to max out the difficulty and have to replay every race multiple times, and have this super intense experience?  Knock yourself out

There’s just so many ways that Forza Horizon 3 morphs to be a great game for you, which is why we recommend it.