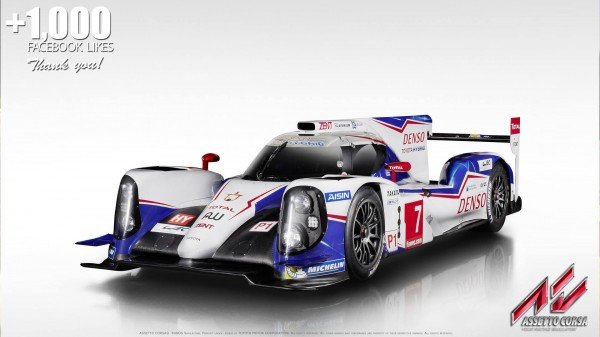 Last month, Stefano Casillo of Kunos Simulazioni went on vacation to Japan, and it looks like he’s bringing some cars home with him! To commemorate 1,000 Facebook Likes, Kunos has announced that they will be bringing Toyota to Assetto Corsa, with 4 road cars and 2 race cars:

This marks the second Japanese automaker to be heading to Kunos’ sim, following in the announcement of Nissan earlier this year. These Toyota cars have been tested at the Nordschleife, as well as Vallelunga, which happens to be where Kunos Simulazioni’s headquarters are located. The cars are being painstakingly recreated, to make for the most realistic portrayal of driving these iconic cars. I don’t know about you, but I’m ready to channel my inner Takumi Fujiwara, if you know what I mean.

Another interesting note is that the TS040 marks the first prototype race car to make its way to Assetto Corsa. In the announcement of the car, Kunos has also mentioned that it will not be the only one. More cars “in the same class” will be available to drive, which means we could see some more P1 race cars approaching. With around 30 some-odd cars that haven’t even been announced yet for Assetto Corsa, I think we still have a lot more to look forward to!

Which P1 racer would you like to see in Assetto Corsa? Let us know in the comments below.